Turkish editor hits out at media coercion under Erdogan 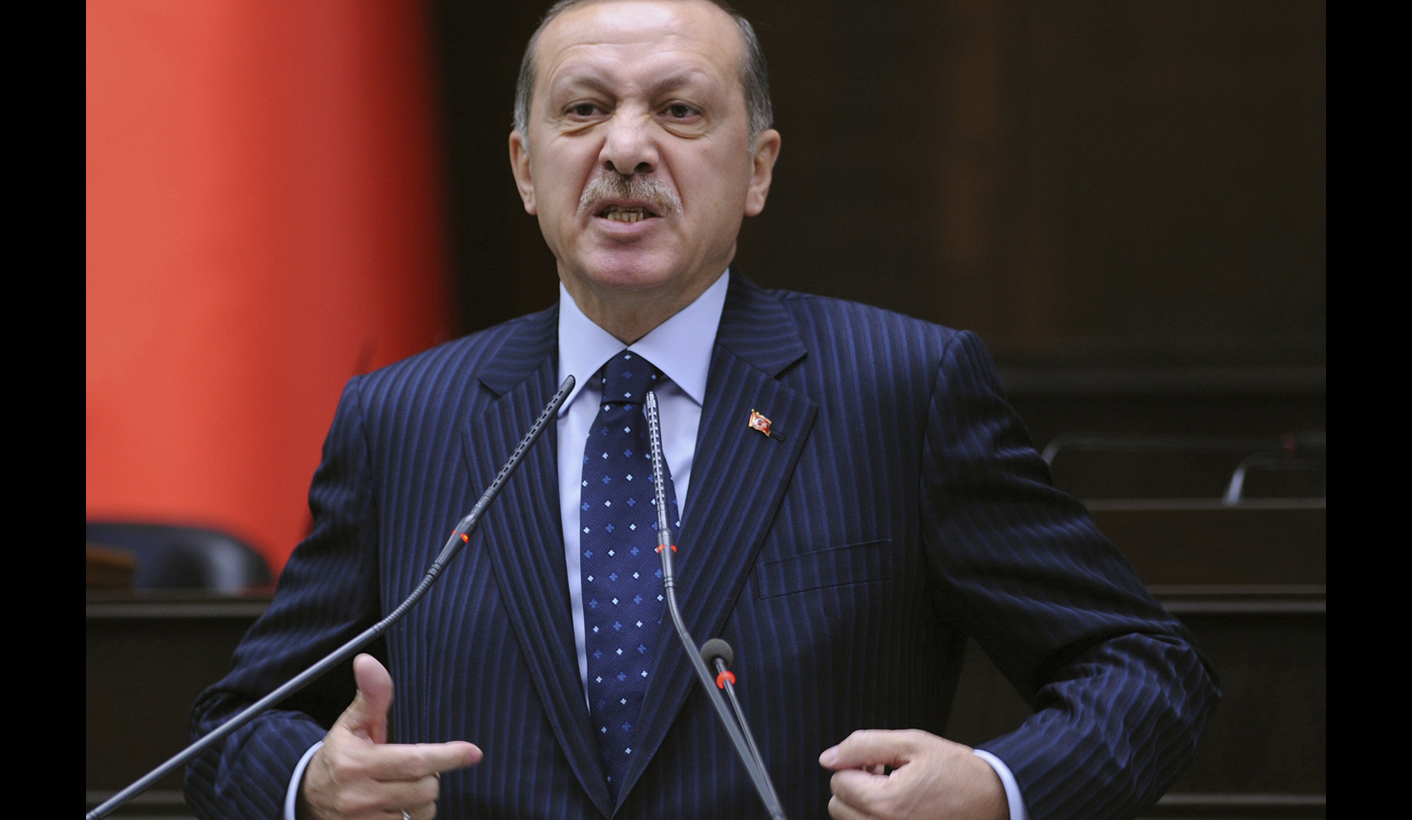 Erdogan faces one of the greatest challenges of his 11-year rule as he battles a graft scandal he sees as orchestrated to unseat him, triggering an open feud with an influential U.S.-based cleric whose followers say they number in the millions.

He has reacted by reassigning thousands of police officers and hundreds of prosecutors – 166 more of them on Tuesday – in an effort to cleanse the influence of the cleric, Fethullah Gulen, and by seeking tighter controls over the Internet, actions his critics say highlight his authoritarian instincts.

Erdogan’s AK Party remains by far Turkey’s most popular, controlling most of the country, and he is widely expected to emerge either as president or prime minister for a fourth term from an election cycle starting with local voting in March.

But increasing discontent with his autocratic style among a segment of Turkish society, which burst onto the streets in last summer’s anti-government protests, has raised concerns in the run-up to the elections about the stability of the NATO-member state that has a long border with civil war-torn Syria.

In an impassioned television interview late on Monday, Fatih Altayli, editor-in-chief of the mainstream Haberturk newspaper, said government pressure had left media editors intimidated and created a climate in which they were unable to publish freely.

“The honour of journalism is being trampled on. Instructions rain down every day from various places. Can you write what you want? Everybody is afraid,” Altayli told CNN Turk.

He spoke after recordings were leaked on the Internet purportedly of executives from Haberturk altering coverage, manipulating an opinion poll and sacking reporters under government pressure.

Reuters has not been able to verify their authenticity. The government has repeatedly denied interfering with the media but it did not immediately comment on Altayli’s remarks.

At a news conference on Tuesday, Erdogan acknowledged calling a Haberturk executive while on an official visit to Morocco in June to discuss its coverage of comments by an opposition leader, but said he only did so to draw attention to the fact that he was being insulted.

Altayli did not comment directly on all of the leaks – though he said the opinion poll recording, which included his own voice, was taken out of context – but defended himself against any suggestion that his organisation was alone in coming under government pressure.

“It is a well known fact that everyone working in the media faces such situations … In time it will be revealed that everybody is in my situation,” he said.

“There is pressure, but how much you reflect that pressure on the newspaper matters more … Am I responsible for the total disgrace Turkey is living in? I am trying to publish as much as possible an honourable newspaper every day,” he said.

Erdogan is feeling the strain on several fronts.

Economic storm clouds are gathering. Credit ratings agency Standard & Poor’s cut its outlook on Turkey last Friday, citing the risks of a hard economic landing. And one of Erdogan’s pet projects, a massive new third airport for Istanbul, looks likely to be delayed by a court ruling.

Erdogan bristles at suggestions that he is anything other than democratic, casting himself as freeing Turkey from the shackles of unaccountable forces over the past decade – from an army that intervened to topple four governments in the second half of the 20th century to, more recently, the sway of Gulen.

Since coming to power in 2002, he has earned praise for reforms aimed at bringing the EU candidate nation closer to European Union norms and for liberalising an economy that has seen unprecedented prosperity under his rule.

He has sought to portray recent reforms in a similar light, saying tighter controls on the Internet, approved by parliament last week and which will enable web pages to be blocked within hours by the authorities, aim to defend the right to individual privacy rather than to gag government critics.

“Up until 11 years ago media in this country were functioning even above the government … We have foiled this game,” he told a parliamentary meeting of his AK Party on Tuesday.

He referred to a media “lobby”, his word of choice for those he sees as conspiring against him, including the “interest rate lobby” of speculators he says seek to harm the economy through higher borrowing costs, or the “preacher lobby” of Gulen’s acolytes.

“This country can no longer be ruled by the interest rate lobby, the preacher lobby, the media lobby,” he said.

Restrictions on press freedom are nothing new in Turkey. In the days before Erdogan’s rise, when the military still held sway, criticism of Mustafa Kemal Ataturk, the revered founder of the modern secular republic, might have been enough to land a journalist in jail for “insulting Turkish identity”.

Still, sections of the Turkish media remain fiercely anti-government, including secularist dailies Sozcu and Cumhuriyet, and more recently Zaman and Bugun, which are close to Gulen and have become more critical since the graft scandal erupted.

But the characterisation of the mainstream media as cowed by government interference will surprise few in Turkey. At least a dozen newspapers and 10 TV stations – including Haberturk – are owned by conglomerates with energy, construction or mining interests – all sectors heavily dependent on government contracts.

Editors and reporters have said in the past they had received phone calls from government officials asking them to alter their coverage or dismiss journalists. But they usually only spoke out after losing their jobs.

“This is not the first time a senior editor has spoken about this, but the intensity of Altayli repeating ‘I am not the only one’ means the entire conglomerate media, at a senior level, has been kept under immense pressure from Erdogan,” Yavuz Baydar, one of Turkey’s most prominent journalists, told Reuters.

“But I truly doubt that the pattern of media managers acting like black boxes – keeping government and company secrets to themselves – can be broken,” said Baydar, a columnist for the Today’s Zaman newspaper, which is close to Gulen.

“The problem is, editors in conglomerate media seem to have sold their freedom and integrity at a price. They live in lies, constantly chased by the truth.” DM