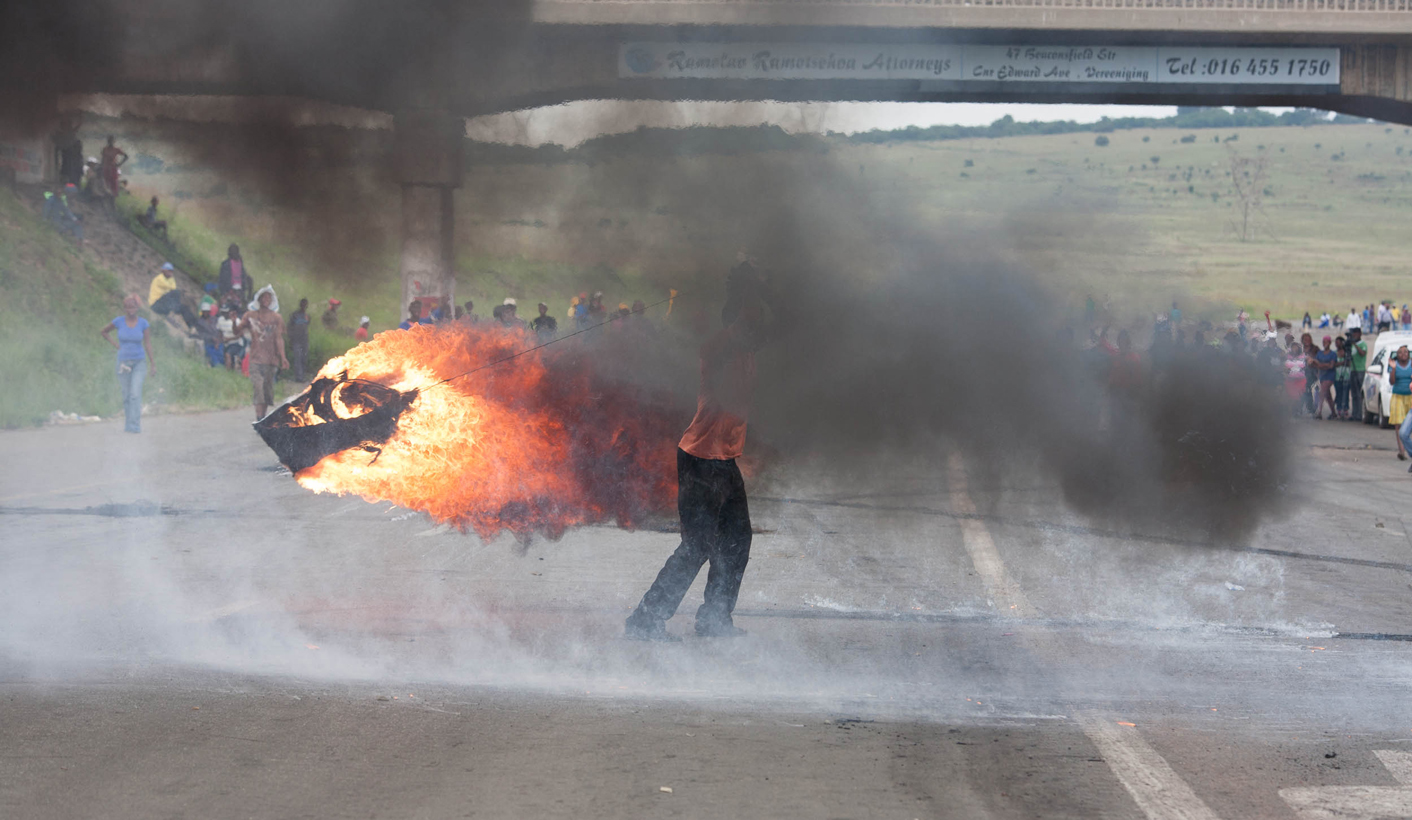 Protests continued in Boiketlong, a large informal settlement outside Sebokeng, on Thursday, where two protestors were shot, with one dying on Wednesday. The area was mostly calm, but residents vowed to continue the protests. By THAPELO LEKGOWA & GREG NICOLSON.

Diphapang Tlali and his wife Mmamokoena live in a shack made of corrugated iron, with wooden frames dividing the inside into multiple rooms. There’s even a small yard, a luxury many of the informal settlements closer to Johannesburg do not have. A satellite dish rests on the roof. But it’s not cheap to watch TV. There’s no electricity in the informal settlement so he uses a generator. R50 worth of fuel lasts a day. The home has a pit toilet. Water comes from a communal tap, which residents say they installed themselves. The settlement sits outside Sebokeng, near the Golden Highway. The shacks are spaced out under the expansive sky, next to the rolling hills.

Photo: Photo: Sebokeng – Diphapang Tlali, the cousin of  26-year-old Lerata Victor Rabolila, killed in the protests, sits outside his shack with his son Thato. Photo by Greg Nicolson/Daily Maverick.

Tlali’s cousin, 26-year-old Lerata Victor Rabolila, was killed in a protest over basic services on Wednesday. Residents allege that ANC supporters aligned to local officials tried to break up their protest and fired two shots of a gun. Rabolila was killed. Another protestor was injured.

“I got a message from a child that my cousin was shot. I then went to the hospital. The story I heard was that when they were marching, a group of men in yellow t-shirts confronted them, shooting, and they retaliated with stones,” says Tlali. Rabolila was originally from Ficksburg and only came to Boiketlong to look for a job. “The most painful thing is that he was shot in front of the police. They did not even bother to come to the house to explain what happened. The people who came to visit us are [Economic Freedom Fighters] leaders who have promised to assist us with burying Lerata, as we are very poor. Lerata was only back in Boiketlong for eight days before he was shot. No one else has come forward to talk to us except the EFF.

“All Lerata wanted was to work for his mother and siblings so they have a better life; he was a security guard by profession – never married and no kids. Both parents are still alive,” finishes Tlali, holding his young son Thato on his lap.

Shaheed Mahomed, from the Workers International Vanguard Party, said on Thursday, “The police and the ANC are well aware of who the murderer is, but he has not been arrested yet. Only yesterday, after years of protests – and now after a worker has died – the ANC sat and concluded an agreement with the landowner (of the land where Boiketlong is).”

Police are yet to arrest anyone for the shootings, but multiple people have been arrested for public violence related to the protest. The case against the five arrested protestors was postponed on Thursday morning.

A group of men standing on the road while the protests had calmed down discussed the problems. “Seeing us standing here does not mean we have given up,” said one, who didn’t want his name mentioned. They were talking of the man who was shot allegedly by ANC supporters. “We are in a very peaceful strike [protest]; you can see we are not bothering the trains that are passing right next to us, and we do not wish to destroy our own facilities within Boiketlong since we have none.”

He continued: “Our aim is to enter the main township of Sebokeng because this is where our councillors stay, and they neglect us.”

The train passed and true to their words, it was not stoned. “We will get to a point where we get angry. All people want is the presence of leadership in our area so we are able to get explanations on our issues. My brother, we just want water and electricity; building my own house won’t be a problem.”

Photo: The protestors have stated their anger with the ANC and graffiti insults President Jacob Zuma. Photo by Greg Nicolson/Daily Maverick

The ANC Gauteng Secretary David Makhura on Thursday said the party would not tolerate members joining the protests. “Disciplinary action shall be taken against members of the ANC and alliance structures who instigate violence during community protests,” he told the media after a meeting of the provincial executive. “There is always some development in the area (where there are protests) and that development is always a source of conflict in the community about who must benefit.”

The development issues in Boiketlong are a lack of services – electricity, sanitation and running water. Call it what you will, but protestors continue to die for their rights. DM