Generation Next: The young political stars who will define our future 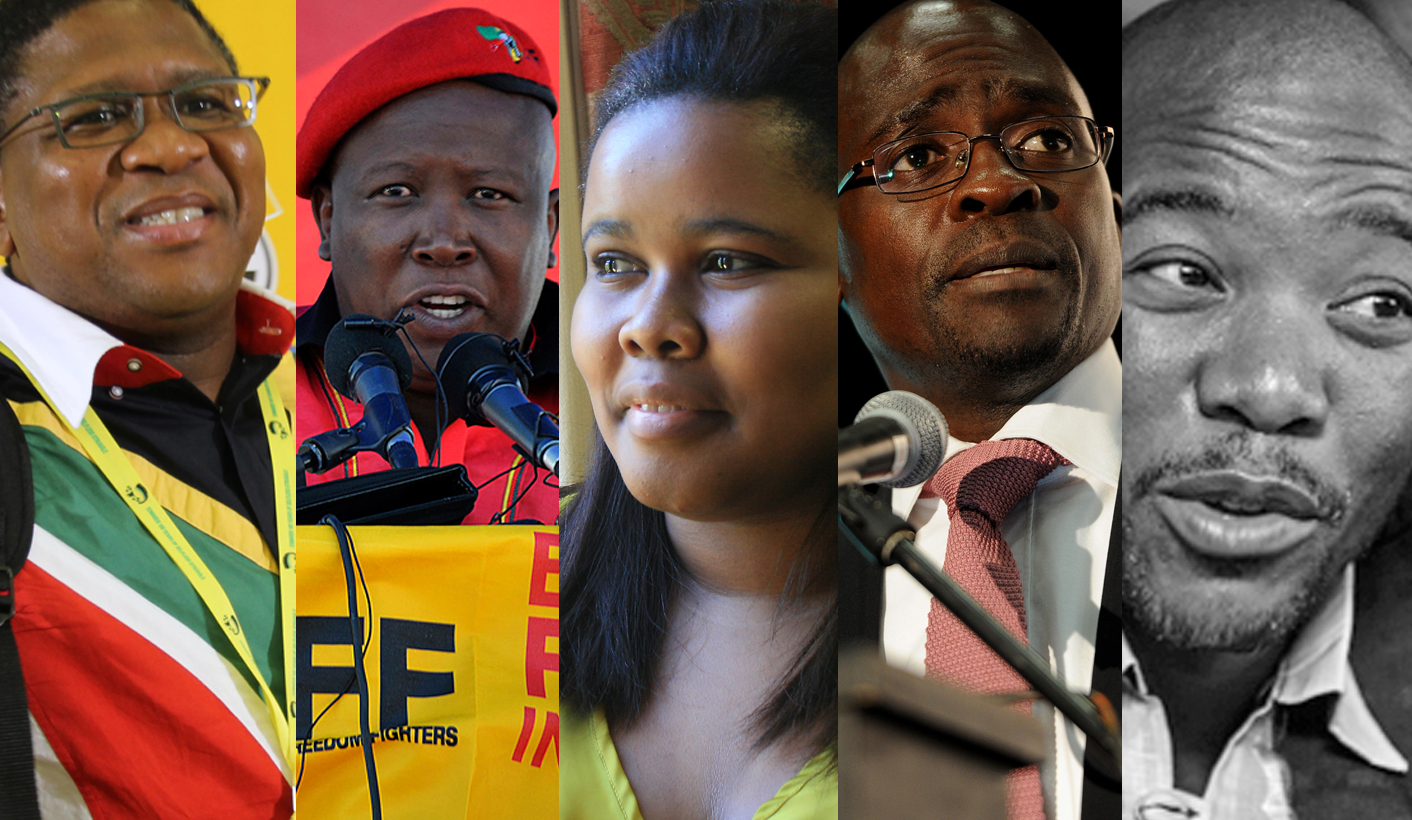 The structure of the Election 2014 candidate lists for the African National Congress (ANC) and Democratic Alliance (DA) suggest that while both parties are trying to put their top teams forward, they are also pushing forward their young guns who will take over the reins in a few years. The introduction of Julius Malema on the political scene as the leader of his party, the Economic Freedom Fighters, has shown what an injection of youthful energy can do to the campaign trail. The toxic factional battles in the ANC have exposed the dangers of not having succession planning. But the next generation of South Africa’s political leaders is now showing themselves, and someday, in the not too distant future, they could face off against each other. By RANJENI MUNUSAMY.

Inkatha Freedom Party (IFP) leader Mangosuthu Buthelezi might be the ultimate survivor of South African politics, but his guide on how to run a successful political party expired about 15 years ago. Buthelezi founded the IFP in 1975, and four tumultuous decades later, the cranky but charismatic Prince of Kwaphindangene is still going strong, leading his party to South Africa’s fifth democratic election at the age of 85.

Buthelezi has refused to let go of his party’s reins or allow younger leaders to be groomed to replace him at the helm. He still believes that he is the party’s biggest draw card and despite his age and ill health, is prepared to stay on the political treadmill. The other leaders of the IFP are too scared to bring up the prospect that the party will in all likelihood cease to exist once Buthelezi is despatched to the eternal podium in the sky where 11-day long speeches are par for the course.

No other party is South Africa can or ever will survive that long on the strength of a single personality – although Bantu Holomisa’s United Democratic Movement has been trudging along for 17 years now. This week, Dr Mamphela Ramphele veered to the other extreme by trying to cause her own personality-based party to implode in just over seven months since it was officially launched.

By recruiting Ramphele and assigning her the non-position of “presidential candidate”, DA leader Helen Zille seems to be preparing to hand over the mantle to her. Zille and her strategists believe that a black leader with liberation struggle credentials will be the magic bullet the party requires to eventually win power and run South Africa. But there is no saying how the DA constituency will react to an imposed black leader, even one appearing as highly qualified and sophisticated as Ramphele.

Up until this week, it looked as if the DA was investing in its black rising stars making their way up through the party’s Young Leaders Programme. At the announcement of the DA’s election candidate list on Saturday, Zille was certainly thrilled to present the “new blood” preparing to take their seats in Parliament alongside the party veterans.

But two people on that line-up are already defining their role and space in the DA and see themselves as future leaders of the party.

In less than five years, Lindiwe Mazibuko has become a household name, first as the DA’s national spokeswoman and then as its forthright parliamentary leader. Despite her youth and inexperience as a parliamentarian, Mazibuko was courageous and confident from the get-go, and as a result was able to lead the other opposition parties in a united force against the ANC. She has been able to stand her ground despite the best attempts by the ANC to belittle and undermine her. She looked certain to remain the biggest thorn in President Jacob Zuma’s side in the front bench across from him, but now that reservation might fall away. Depending on the intricacies of the deal with Ramphele, Mazibuko might have to make way and play second fiddle to the DA’s new recruit, if only temporary.

The other front-runner to be future leader of the DA is party’s Gauteng premier candidate Mmusi Maimane. His star began to rise when he became the party’s Johannesburg mayoral candidate in the 2011 local government elections. He took over from Mazibuko as the DA’s national spokesman and at the party’s federal congress in 2012, became one of three deputy federal chairpersons. He has an impressive list of academic qualifications and is now engaged in a whirlwind campaign tour of Gauteng in the hope of winning control of the province from the ANC.

Both Maimane and Mazibuko have made their presence felt in the DA in a short timespan. They are ambitious and can by no means be considered as token leaders in the party. They are holding their own and building their own constituencies. Once the DA gets over its fascination with Ramphele, if there indeed is one, they will see that Mazibuko and Maimane present them with much more credible options as future leaders. The only possible danger is that Mazibuko and Maimane, and their respective camps, could end up bulldozing each other in a leadership contestation.

The yet unfinished, un-rubberstamped ANC election list is also defining its possible future leaders. In the lucrative and much-desired spot on the list below Zuma and his deputy Cyril Ramaphosa is the debonair Malusi Gigaba. He rocketed above veterans like Jeff Radebe and Baleka Mbete, as well as party royalty like Lindiwe and Max Sisulu.

Gigaba has proved to be smart and politically shrewd, switching from the Thabo Mbeki camp to the Zuma camp at the halfway point during the 2007 ANC Polokwane conference. From there, he fought to prove his loyalty to Zuma and secured the Public Enterprises super-ministry in Zuma’s Cabinet. Ahead of the ANC’s Mangaung conference, he was nominated by some branches for the positions of deputy president, national chairman and deputy secretary general. But he is playing his game smartly, trying to hold back his ambitions until the next conference in 2017. But the ANC recognises his talents and potential and therefore elected him as head of its national elections committee.

Also on the ANC’s top 30 list is Gigaba’s successor as ANC Youth League (ANCYL) president Fikile Mbalula and predecessor Lulu Johnson. Zizi Kodwa, Zuma’s former spokesman, who also built his reputation in the ANCYL, is also in the top 30. All three are likely to be flag bearers in 2017 as people schooled through the ANCYL for future leadership of the ANC. Mbalula had been in remission in the ANC after backing the wrong camp at Mangaung but his strategy to lay low and play nicely has brought him back into favour. He is the only non-member of the ANC national executive committee in the top 20 of the election list.

The success of the ANC’s next generation of leaders is dependant on how well they play down their ambitions during the next term as Ramaphosa, national treasurer Zweli Mkhize, Lindiwe Sisulu and Nkosazana Dlamini-Zuma manoeuvre their way through the succession battle. They cannot rise too quickly but need to keep their profiles reasonably high to remain popular in the party structures. As things stand, Gigaba is streets ahead of any possible contenders due to his strategic positions in the ANC and government.

Julius Malema is obviously the one exception to the rule as a former ANCYL president who is not a rising star in the ANC. But Malema has used his expulsion from the ANC and troubles with the law to catapult himself as South Africa’s newest political party leader and is heading a high-visibility national campaign to capture support amongst the youth and unemployed, as well as frustrated and discouraged communities. The Economic Freedom Fighters (EFF) is proving to be the game changer in the 2014 elections, and Malema has made a remarkable metamorphosis from enfant terrible to a political lightning rod in just a few months.

Malema is certain to be an MP after the elections and the discipline of parliamentary processes and structured debates will help him grow further. In 2019, provided that he can stay out of jail, Malema could be a real force to be reckoned with, either still as EFF leader or returned to the ANC fold.

While the 2014 elections is pretty much built around the same personalities and the same issues, the next national elections could introduce new champions and modernised campaigning. Once all the parties recognise that the older generation can no longer attract new voters and new constituencies, they will be more amenable to letting the young guns run free.

In the next few years, Mazibuko, Maimane, Gigaba, Mbalula and Malema could be competing for an office at the Union Buildings. And if Zwelinzima Vavi is ever able to extricate himself from the hole he dug himself into, he could be the face of the workers’ party that now appears inevitable.

Until the next generation take the lead of their own parties, some possibly only in 2024, South Africa will have to put up with the same old recycled issues, medieval campaigns and politicians past their sell-by dates. Which one of these young leaders will end up on top? We wouldn’t bet against any of them. DM