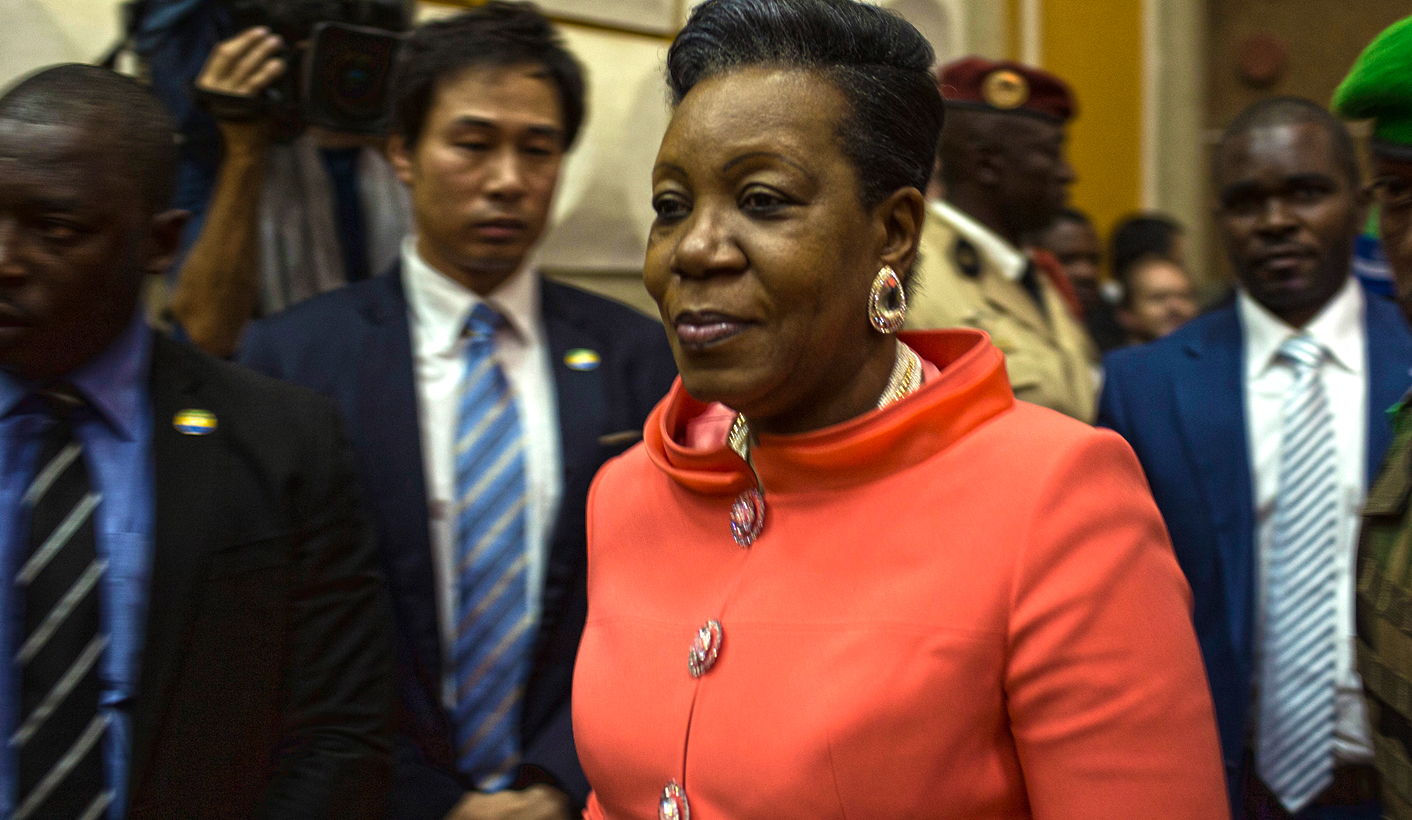 Catherine Samba-Panza is the new president of the Central African Republic, and it’s her job to get that country back on its feet after a year of near anarchy and vicious blood-letting. Has she got the necessary skills? Maybe. But she can’t do it on her own. By SIMON ALLISON.

For the first time in a year, there’s glimmer of hope for the Central African Republic. It’s faint – barely more than a pin-prick of light at the end of a long, torturous tunnel – but it’s there nonetheless. For this, we have Catherine Samba-Panza to thank.

Sorry, that’s President Catherine Samba-Panza. She is the CAR’s new head of state, elected last week by a transitional parliament that has been tasked with turning around the country’s fortunes. It is Samba-Panza’s job to lead the transformation, to figure out a way to disarm the renegade militias, calm ethnic and sectarian tensions and address the humanitarian crisis which has touched nearly every one of her 4.5 million new subjects (or, at the very least, provide conditions in which international aid agencies are able to work effectively to address it themselves).

Despite the daunting nature of these challenges, Samba-Panza has a few things going for her.

First, as the former mayor of the capital Bangui, she’s a seasoned politician, but she’s not aligned with any of the current warring factions, nor does she have links with the deposed regime of President Francois Bozize. Most of her political experience comes from her role as head of a reconciliation process designed to unify the CAR’s various political groupings – experience which will stand her in excellent stead in the months (and possibly years) to come. As mayor, she developed a reputation as ‘incorruptible’, which will also help – precious few other Central African politicians can claim the same. All this means that she doesn’t enter office compromised, already beholden to some faction or another. She has the space and the courage to be her own woman.

Second, she’s a Christian. President Michel Djotodia – the rebel leader who unseated Bozize last year, and ruled for a disastrous nine month period before mercifully exiling himself earlier this month – was not Christian. He was Muslim, and although the CAR does have a sizeable Muslim minority (around 20% of the population), it’s just that – a minority. The rest are overwhelmingly Christian. Historically, the Muslim-Christian divide has not been much of an issue in the CAR, but this has changed over the last year. Djotodia’s mostly Muslim Seleka rebels were accused of targeting Christians, while civil self-defence groups known as the anti-Balaka started defining their enemy in religious terms. In this context, Samba-Panza’s religion will calm and reassure the Christian majority. Her big challenge, however, will be to convince Muslims that she intends to rule in their favour too. Already, rights groups are reporting that scared Muslims are preparing to leave the country. This would be a tragic loss of a vibrant, productive community for the CAR, and could well lead to more conflict in neighbouring countries who are ill-equipped to deal with such an influx.

Third, she’s a woman. In an idea world, gender shouldn’t matter. In this world, however, it does; and especially so in the CAR where failed leadership has always been male, and violence is almost exclusively committed by men. “There’s never been a woman at the head of the CAR,” notes Stephanie Wolters, regional analyst for the Institute for Security Studies. “That, together with the fact that she is a civil-society activist with no clear links to any party, will probably help her to be seen as more neutral and working for the good of the country, and not for furthering her own political career. Perhaps people have more confidence in a woman.”

In taking office, Samba-Panza becomes the third female president in Africa. It should be noted that both the others – Liberia’s Ellen Johnson-Sirleaf and Malawi’s Joyce Banda – also took charge in times of political crisis, and both have been lauded internationally for their efforts. “I do think for many people on the ground it brings hope that [Samba-Panza is] a woman because they’re tired of men with guns ruling over them. They believe she offers a realistic chance of reconciliation,” said Human Rights Watch’s emergency director Peter Bouckaert, speaking to the Guardian from Bangui.

Despite these relative advantages, the complexities of the Central African Republic are such that the odds are still staked against Samba-Panza. Certainly, her appointment has not had any noticeable impact on levels of violence in and around Bangui. On Sunday, another eight people died in what Reuters described as ‘mob violence’ in the capital, adding to the 2,000-plus that the United Nations estimates have already died since March 2013.

To have any chance at all, she’s going to need support from the international community, and lots of it. On the same day she was appointed, the European Union announced that it would send 500 soldiers to secure the Bangui airport, freeing the French troops already in the CAR for the more difficult work of securing main road and moving into the countryside. This is a welcome development, but more is needed. In particularly, the African Union needs to up its troop commitment; it must also seriously consider replacing the Chadian troops who are operating in the CAR under an AU mandate, but have been culpable in aiding and abetting the Seleka rebels who overthrew Bozize.

Saving the CAR is one of the most difficult tasks in world politics today (second only, perhaps, to figuring a way out of the Syria mess). In choosing Catherine Samba-Panza to lead it, the CAR has made at least one small step in the right direction. DM

Photo: Newly parliamentary-elected interim President of the Central African Republic Catherine Samba-Panza walks into the National Assembly prior to her swearing-in ceremony in the capital Bangui January 23, 2014. REUTERS/Siegfried Modola