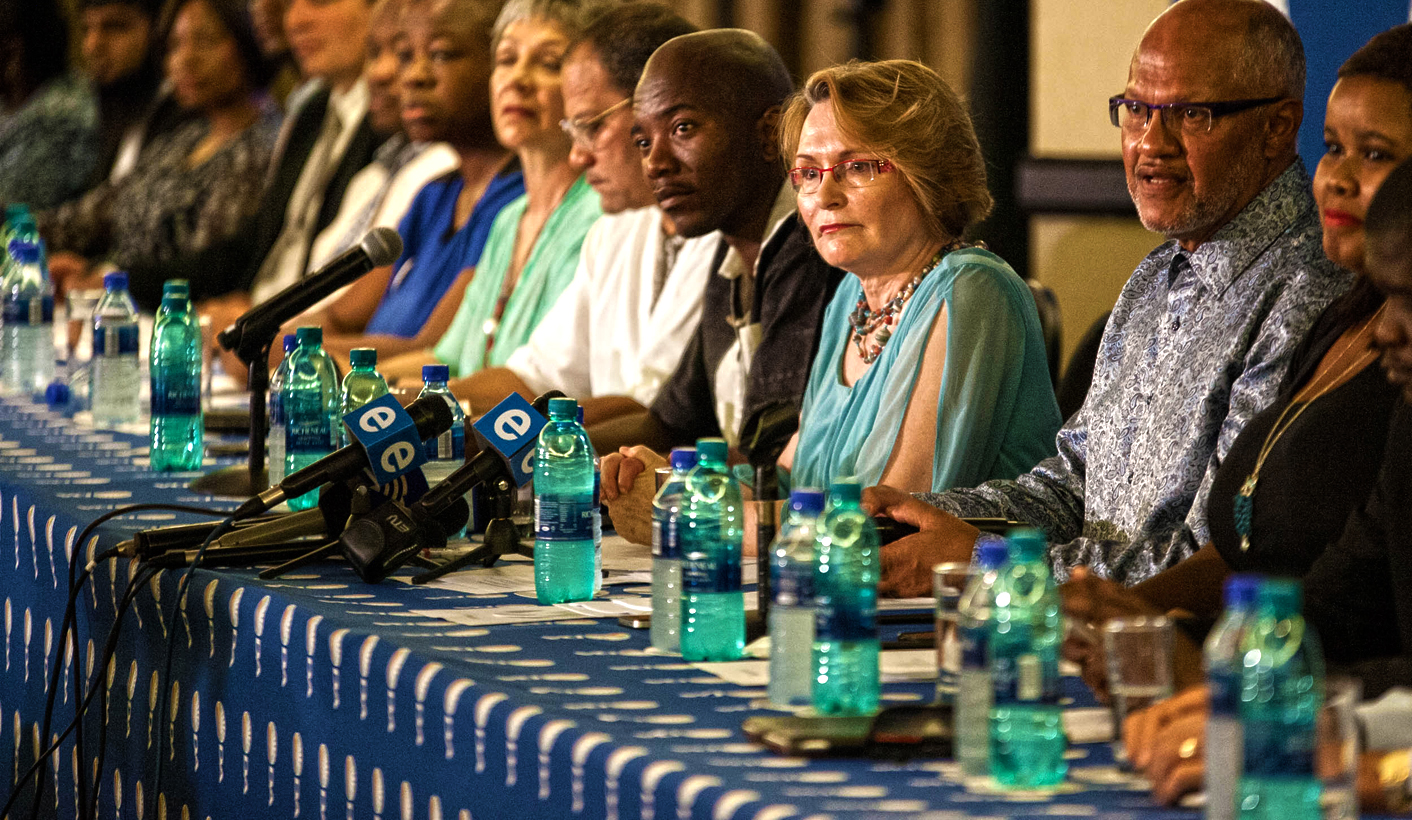 On Saturday, the Democratic Alliance gathered its new (and old) candidates at a Rosebank hotel, in order to show off their skill sets. This is the army they will take to battle. Good luck with that. By RICHARD POPLAK.

Notes from the elections that may eat us all:

Strangely—or perhaps not so strangely—every time I encounter Helen Zille in a room, my mind flashes to a Braveheart style montage: the Democratic Alliance’s stalwart leader, head shaved, face smeared with blood and war paint, guiding 10,000 troops forward into battle. It’s just a flash, but it happens every time, and it makes me a little scared and uncomfortable—this sense that if Zille ever did become president of this country, a role she most certainly covets, I would be conscripted into service for the invasion of Zimbabwe or Mozambique or some other nearby candidate for regime change, urged to war by the howling President herself.

I can’t figure out if this is just a boilerplate Freudian reaction to a Strong Woman, a mother figure who is uncompromising and ambitious and cunning, and whom could have my balls for Sunday lunch hors d’oeuvres before I realised they were missing. But I don’t feel that way about all Strong Women—Lindiwe Mazibuko was sitting two chairs down from Zille, and I received zero Braveheart vibes from her. No, some people are born warriors, genetically predisposed to consuming the livers of their vanquished enemies amidst the gore of a war zone.

Helen Zille is one such person.

So I’ll confess to being a bit disappointed by the choice of mise en scene for the DA’s announcement of their candidate list for the 2014 election. (Said announcement was, I assumed, made in reference to the general elections the government is constitutionally bound to call this year, widely expected to fall on April 27, but I couldn’t be sure. Zille kept mentioning how “exciting” 2019 is going to be, so I was understandably confused). I wanted Zille to be her best possible self, surrounded by a phalanx of Spartans, abs glistening under bronze armour and bronzing tanning oil. No such luck.

Instead, what appeared to be the board of directors of a detergent multinational sat before a roomful of reporters, Zille at the centre of the table. The room was a supremely warm conference suite in Rosebank’s Hyatt Hotel, the lobby crowded with pink Germans alternately sipping cappuccinos and loudly complaining about their quality. The list of the DA’s Chosen Ones seemed perfectly calibrated to reflect Diversity, as if the pigment of all of the candidates had been run through a software programme designed to identify the Platonic ideal of racial rainbow-ism, and reflect that ideal back to South African voters.

Whomever you may be, stated the candidates wordlessly, we have your flavour.

When my colleague Ranjeni Munusamy, clearly thinking along the same lines, asked Ms. Zille during question period whether the candidates were chosen by a strict racial quota inspired by a Coke commercial, I got my most powerful Braveheart flash yet. Zille swallowed and looked hard at Munusamy, in a way that suggested that should Zille ever occupy State House, Munusamy would be one of the first—but not the very first—to be dumped down an active Karoo fracking hole. Meanwhile, at mention of the word “race”, the DA candidates’ eyes widened in abject alarm, as if a locomotive had crashed into the room, followed shortly by a 747.

“We believe in excellence and equity,” said Zille slowly, “and those two are not contradictory.” Munusamy did something with her iPad, presumably to do with hiring a security contingent.

So, what of these candidates, who hope to run our provinces and wish to administer the country? Are they indeed excellent? Well, it was hard to tell. For one thing, I hadn’t heard of many of them—which is to say that I’d heard of some of them, forgotten a portion of those I’d heard of, and really had no clue regarding the rest. Zille introduced them all, with pithy bios that summed up their manifold achievements. She gushed over the number of Masters degrees her troops had accumulated, but last I checked, Master degrees don’t win elections. Some of their names rhymed: of Zakhele Mbhele, candidate for the Western Cape, Zille said, “there’s a lovely alliterative lilt to that.” There is! But alliteration is a poetic technique, not an election strategy.

Mbhele, like many of those gathered around Zille, was a graduate of the DA’s Young Leader’s Programme—aforementioned software created to generate aforementioned racial rainbowism—and had thus been groomed from the ground up for just such a moment. But still, and despite the presence of the DA’s big guns, the candidates did seem a tad fresh.

Which is the whole point, you see. “The DA doesn’t ossify,” said Zille. “We don’t grow into a piece of petrified wood. We grow new timber.” This was a reference to the gerontocracy creaking its way through the ANC upper echelons, or maybe just an aping of Julius Malema’s nascent Economic Freedom Front strategy: put a whole bunch of kids in red berets and, hey presto!, five percent of the electorate is yours for the taking.

I wondered if it didn’t have something to do with the DA’s bunting, the background of which was the colour of a Cape Town dusk just as the sun sets behind the mountain and the last of the gin and tonic drains into the mush of the lemon wedge, while the first faint whiffs of a squid braai drift up from the fourth patio of a Camps Bay penthouse apartment. I supposed that the scrubbed, eager DA folk in their Sunday best brought to mind the political aspirants of a South Africa belonging to an alternate realm, a more genteel spot where Masters degree graduates pow-wow about the latest political strategies learned from Danish mini-series, and the cruel, craven steel of reality is many, many light years away. I got the sense that this was all play-acting, and that the responsibility wasn’t mine to believe that these fresh new candidates were capable of governing anything more than a spaza shop, but the DA’s to prove that this field was ready to contest an election in the richest and most powerful country in Africa at a critical point in its history.

Did I mention that the room was hot? I did. But what I should have said is: the room was sweltering, blistering, unbearable. The candidates, many of whom were appearing for the first time before the cameras, were wilting, their suits and ties going limp. Soon, they would be in a puddle under Zille’s feet. From that, I thought in a hypoxic swoon, Zille would raise an army of orcs, and go forth into the Rosebank Mall, hacking and chopping her way to Pretoria.

These candidates? I’m not sure they’re the army Zille needs. Not bloodthirsty enough. Not battle hardened enough. Which is the problem with the true warrior. Everyone seems like a sap by comparison. DM