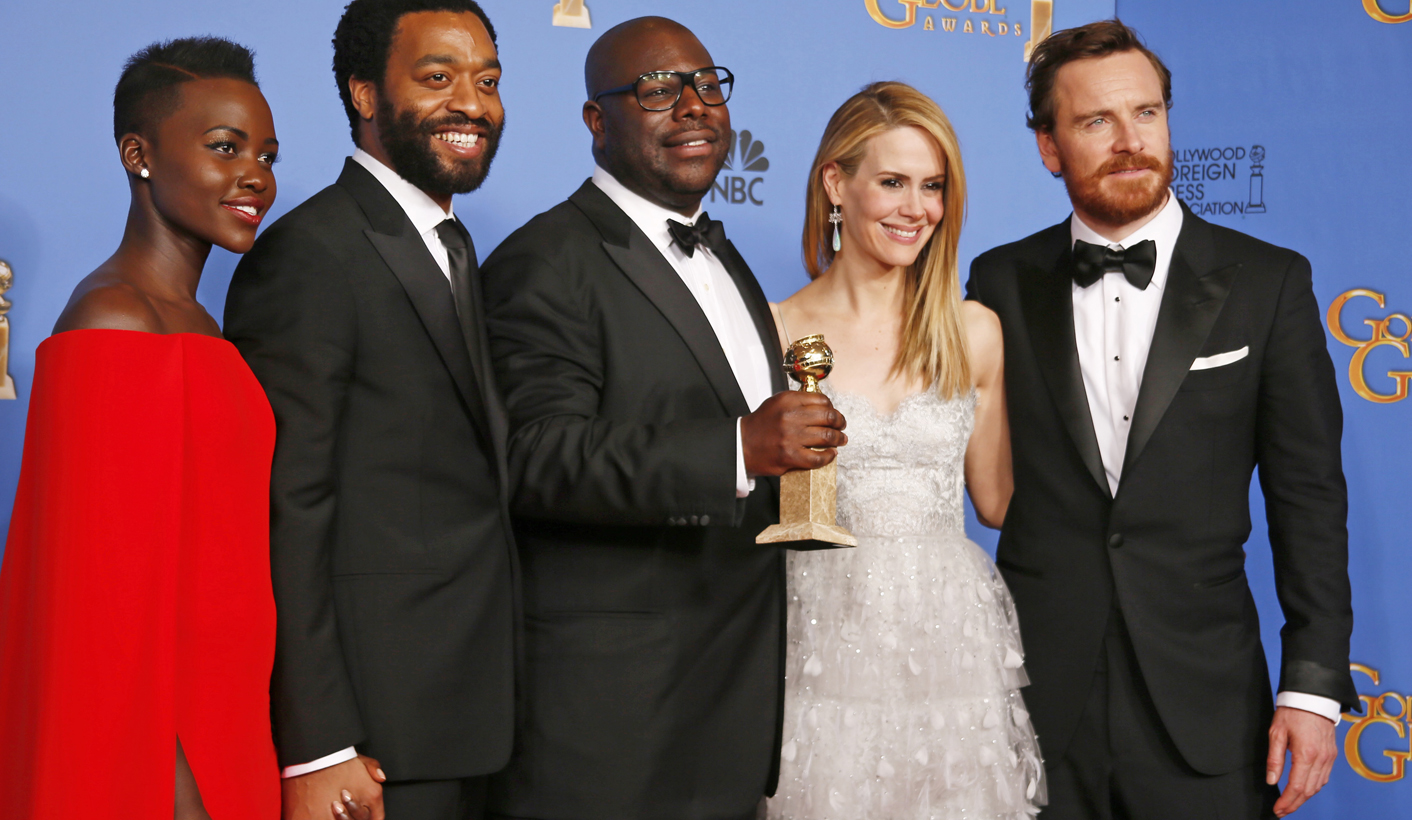 The film "12 Years a Slave" took the coveted Golden Globe for best drama and "American Hustle" won best musical or comedy on Sunday in a kick-off to the Hollywood awards season that foreshadows a wide scattering of honors for a year crowded with high-quality movies. By Mary Milliken.

Only two films garnered more than one award at the 71st Annual Golden Globe Awards, an important but not entirely accurate barometer for the industry’s highest honors, the Academy Awards to be held on March 2.

“American Hustle,” a romp through corruption in the 1970s directed by David O. Russell, was the top winner with three Globes for its seven nominations, while modest AIDS film “Dallas Buyers Club” starring Matthew McConaughey, took home two acting awards for him and co-star Jared Leto.

British director Steve McQueen’s brutal depiction of pre-Civil war American slavery in “12 Years a Slave,” based on a true story of free black man Solomon Northup who was sold into slavery, only won one award out of its seven nominations. It was entirely shut out from the acting honors, for which it had been a presumed favorite.

But best drama is the top award of the Golden Globes and McQueen thanked actor and producer Brad Pitt, who played a small part in the film but a big role in getting it made. “Without you this movie would never had gotten made, so thank you, wherever you may be,” McQueen said.

Among those that left empty-handed were two darlings of critics, the Coen brothers’ paean to the 1960s folk scene “Inside Llewyn Davis” and Alexander Payne’s homage to the heartland, “Nebraska.”

The first big night of the Hollywood awards season is the purview of the 90 some journalists in the Hollywood Foreign Press Association (HFPA), who wield outsized clout in the awards race as buzz around these honors influences members of the Academy of Motion Picture Arts and Sciences in their voting for the Oscars.

Oscar nominations are to be announced on Thursday and “12 Years a Slave” and “American Hustle” are likely to be in the list of 10 nominees for best picture, going head-to-head unlike in the Globes, where they competed in two separate categories.

The Globes have a mixed record when it comes to predicting the Oscar best picture, though last year’s best drama winner, “Argo,” did go on to win the Academy Award for best movie.

In a setting more intimate and whimsical than the tightly scripted Oscars, A-listers and powerbrokers pow-wowed over cocktails and returning co-hosts Tina Fey and Amy Poehler poked fun at the most powerful in the glamorous audience.

It was a night in which there seemed to be a prize for most every film, a reflection of a banner year for quality cinema in which critically acclaimed films piled up in the last half of the year.

The top drama acting awards went to Cate Blanchett for her turn as a riches-to-rags socialite in Woody Allen’s tragicomedy “Blue Jasmine” and McConaughey for his portrayal of unlikely AIDS activist Ron Woodroof for which he lost 50 pounds (22.7 kg).

“Ron Woodroof’s story was an underdog, for years it was an underdog, we couldn’t get it made … I’m so glad it got passed on so many times or it wouldn’t have come to me,” said McConaughey, widely lauded for a string of strong performances this year.

Russell, who reunited cast members from his previous films, reaped the rewards of loyal actors.

Amy Adams won best actress in a musical or comedy for her role as the conniving partner to a con-man played by Christian Bale in “American Hustle,” while Jennifer Lawrence took best supporting actress for her turn as his loopy wife.

“David, you write such amazing roles for women,” Adams told the star-studded room as she accepted the award. She starred in Russell’s 2010 “The Fighter,” while Lawrence won the best actress Oscar last year for his previous film, “Silver Linings Playbook.”

The HFPA is known to also reward big Hollywood names and this year Leonardo DiCaprio won best actor in a musical or comedy for his role as a fast-living, drug-popping, swindling stockbroker in the “The Wolf of Wall Street,” his fifth collaboration with director Martin Scorsese.

“As the history of cinema unfolds, you will be regarded as one of the great artists of all time,” DiCaprio told Scorsese as he accepted the award.

Mexican filmmaker Alfonso Cuaron won best director for his existential space thriller, “Gravity,” a film starring Sandra Bullock as an astronaut tumbling through space that has won praise for its groundbreaking technical advances.

The HFPA honored Woody Allen with the Cecil B. DeMille award recognizing outstanding contribution to the entertainment field. Famously averse to awards shows, the 78-year-old Allen sent one of his favorite actresses, Diane Keaton, to stand in for him.

The Golden Globes are also the opening salvo for red carpet fashion, and this year Hollywood’s leading ladies appeared to favor shimmery champagne, silver and gold, along with bright reds and vibrant floral shades for their gowns.

In the television awards, “Breaking Bad” won best drama for its offbeat story about a school teacher turned drug kingpin, a show that concluded last year with its much acclaimed fifth and final season.

“This is such a wonderful honor and such a lovely way to say goodbye to the show that meant so much to me,” said Bryan Cranston, who accepted the award for best actor in a drama series. DM