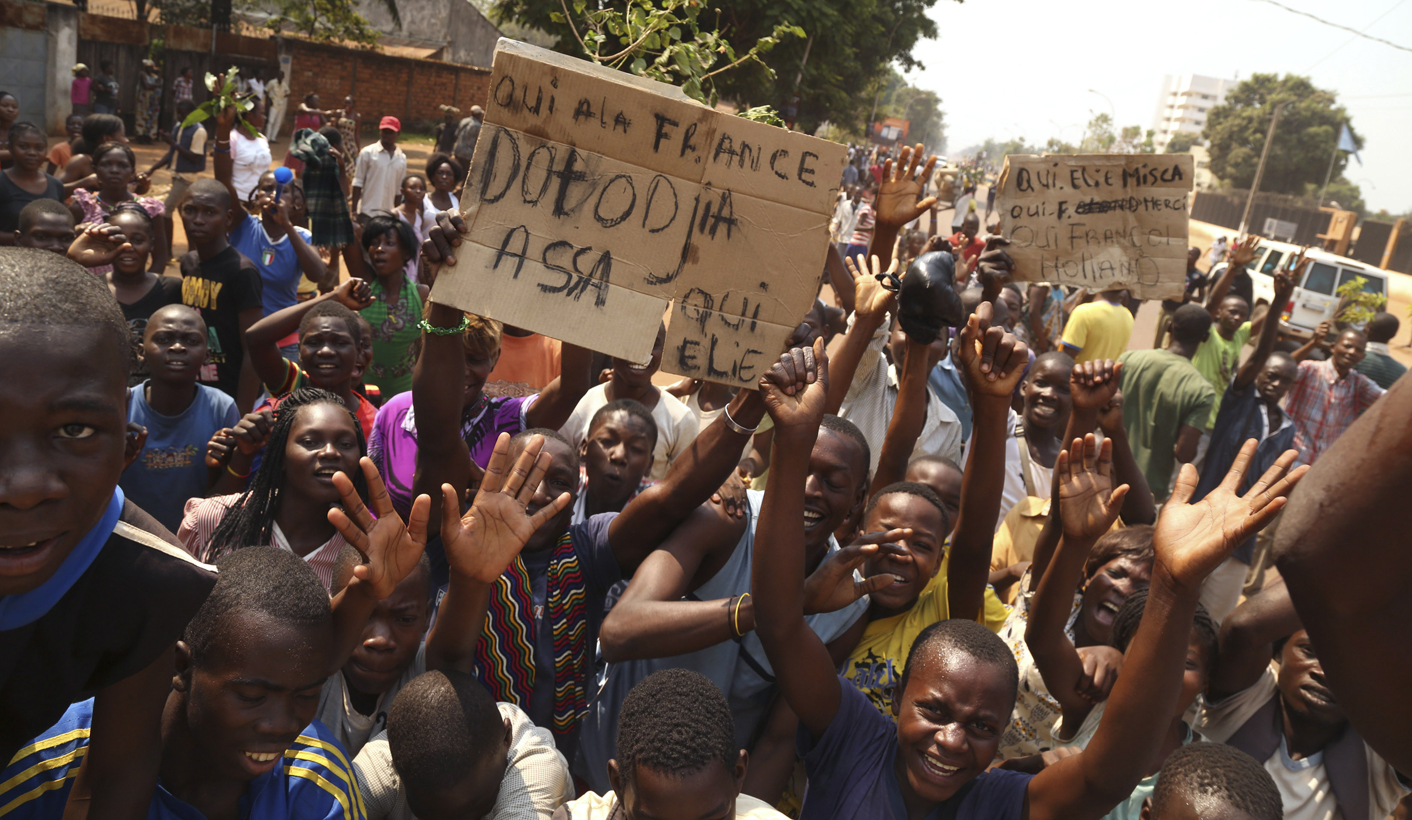 Central African Republic's interim leaders caved in to international pressure and resigned on Friday after failing to halt inter-religious violence, prompting street celebrations but also questions over who would step in to take charge. By Madjiasra Nako and Paul-Marin Ngoupana.

The resignations of President Michel Djotodia and Prime Minister Nicolas Tiangaye came at a two-day summit of the Economic Community of Central African States (CEEAC) in neighbouring Chad. Talks to decide on new leadership will take place in Central African Republic, a communique said.

Thousands of people have been killed and a million displaced since abuses by Djotodia’s mainly Muslim rebels, known as Seleka, prompted the creation of Christian self-defence militia after he seized power in March.

With memories of Rwanda’s 1994 genocide stirred by the unrest, France sent hundreds of troops to its former colony last month to support African peacekeeping forces. But the killings have continued, and France has repeatedly voiced its frustration with Djotodia’s government.

Sporadic gunfire rang out in Bangui after curfew on Friday as French forces fired warning shots to prevent clashes between rival fighters in one neighbourhood.

Djotodia and Tiangaye resigned after Central African Republic’s transitional assembly (CNT) was summoned to the Chad summit late on Thursday to decide on the country’s future.

Under an agreement brokered by the CEEAC last year, the CNT elected Djotodia to his position as interim president in April to take Central African Republic to elections, due at the end of this year.

“We take note of the resignation. It is up to the CNT to decide what happens now,” said French Foreign Ministry spokesman Romain Nadal. “France does not interfere in any case with this process.”

The regional leaders, led by Chad’s Idriss Deby, a French ally, had run out of patience with Djotodia. Sources told Reuters on Wednesday he would be forced to resign at the summit, although Djotodia’s office had insisted he would remain in power.

A French diplomatic source said the leaders of regional powers Chad, Gabon and Republic of Congo would each have their favourites to take over but there were “no outstanding candidates” and it was up to local leaders to decide.

“It is important this transition happens as quickly as possible,” the source said. A sticking point is likely to be that anyone who takes up a senior position in the transition is ruled out of running in the next election.

When news from the summit reached the capital, thousands of residents took to the streets, dancing, singing and honking horns in celebration. Cheers erupted at a camp for 100,000 displaced Christian civilians at the French-controlled airport.

“It’s a new day for Central African Republic. God has heard our crying and our prayers,” said Jeanne, a 71-year-old woman in Bangui, outside a shop where she said her son was killed by Seleka in March.

As evening approached, many people returned home, fearing overnight reprisals by former rebels who were still in town. Residents in several neighbourhoods reported Seleka gunmen firing into the air to clear their path to leave.

French forces fired warning shots after curfew to deter clashes between Seleka fighters and their rivals in the Miskine neighbourhood of Bangui, said Amy Martin, country director for the U.N. Office for the Coordination of Humanitarian Affairs.

“The French have been engaging warning shots, trying to calm it down. There was a period of shooting ongoing for the past half hour. It’s a little bit calmer now,” Martin said.

French armoured vehicles were deployed outside the presidential palace.

France has 1,600 troops in the country, operating under a U.N. mandate to assist an African force that is due to be bolstered to 6,000 men. It strengthened its military presence on the streets on Friday.

The EU ambassadors, meeting in Brussels, asked EU foreign policy chief Catherine Ashton to present a more detailed paper next week, with a view to EU foreign ministers taking a decision on the force on Jan. 20, a spokesman for Ashton said.

Britain and Germany have said they would not send ground troops while Belgium has said it would consider sending troops as part of an EU operation.

The U.N. peacekeeping mission in neighbouring Democratic Republic of Congo said this week it was worried about the large numbers of Seleka fighters that had crossed the border.

The loose band of rebels had been held together by frustrations over underdevelopment of the north and desire for control over gold, diamonds, uranium and oil. Many of its men were battle-hardened fighters from Chad and Sudan.

But Djotodia has struggled to control his men and resistance peaked last month with an assault on the capital by Christian militia and gunmen loyal to ousted president Francois Bozize.

Photo: People gesture as they celebrate the resignation of Central African Republic’s interim President Michel Djotodia in Lakouenga district January 10, 2014. Djotodia and his prime minister have resigned, according to a statement issued after a two-day summit in neighbouring Chad. Regional leaders had put pressure on Djotodia to step down after he failed to halt months of inter-religious violence that has forced 1 million people from their homes. REUTERS/Emmanuel Braun