While you were on holiday: a bloody New Year in Africa 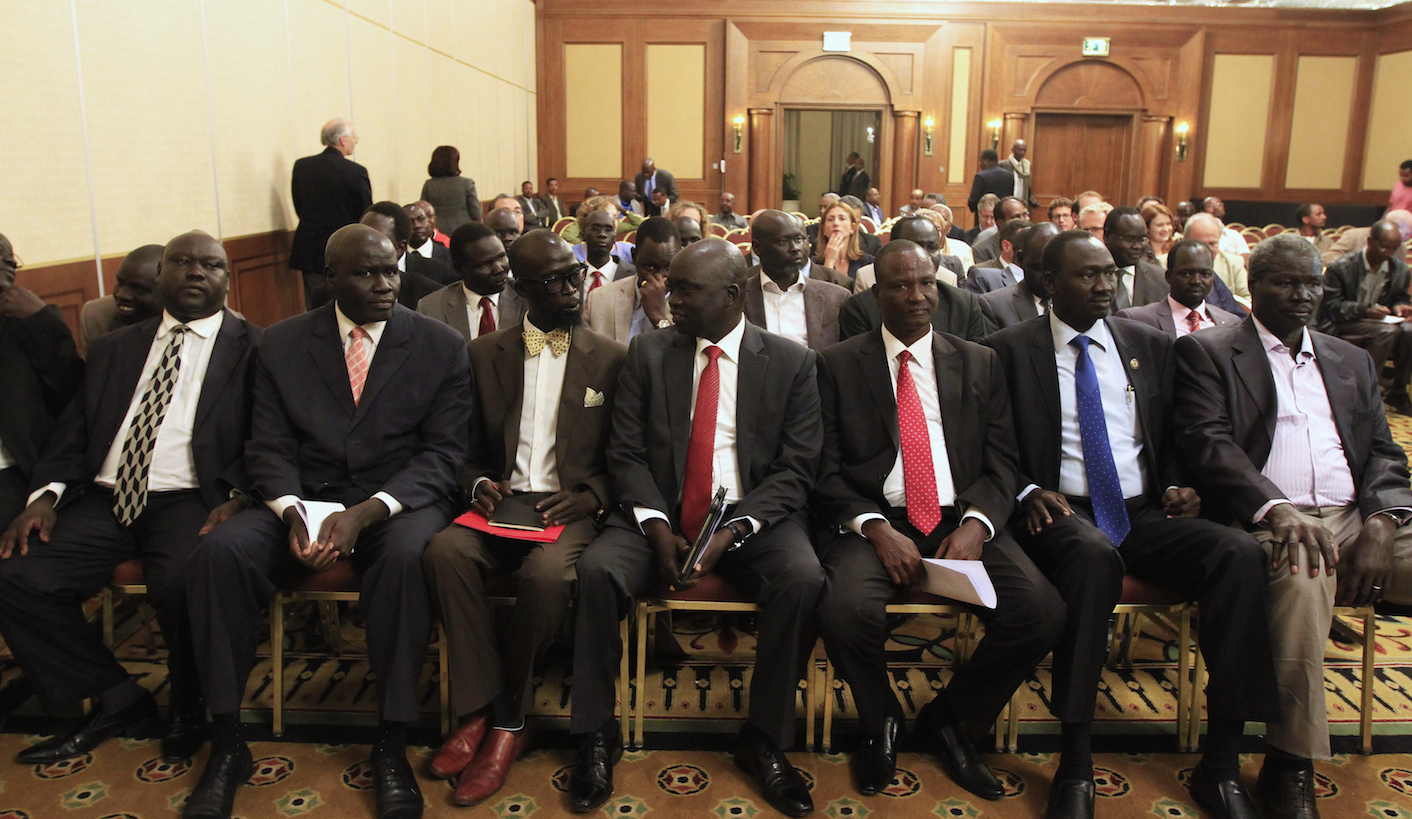 At the Daily Maverick we firmly believe that there is some merit in making like an ostrich and burying our head in the sand for a couple of weeks every year - the world being too much with us and all of that. But as we return to our lives and to be with the world again, we’d like to catch up with events that might have passed us by. KHADIJA PATEL rounds up the four most important stories coming out of Africa and finds that it’s been a bloody New Year for some parts of the continent.

A former Rwandan intelligence officer ex-Colonel, Patrick Karegeya, was apparently assassinated in a room in Sandton’s Michelangelo Towers Hotel last week. The circumstances surrounding Karegeya’s death remain unclear but a bloodied towel and curtain cord were discovered in the room’s safe. The 52-year-old’s body was discovered in the bed of the room on New Year’s Day, three days after he had booked into the hotel. According to the SA Police, preliminary investigations have revealed Karegeya’s neck was swollen, indicating a possibility that he might have been strangled. Police are also said to be investigating suspicion that Karegeya had been drugged before being killed.

Another Rwandan in exile in South Africa, former army chief General Faustin Kayumba Nyamwasa, has been quoted as saying there was evidence that “no less than three or four men” had been present at the killing.

While the Sandton police are investigating a case of murder, the repercussions of Karegeya’s death remain troubling. Karegeya had been living in exile in South Africa for a number of years. However, he is not the first enemy of the Rwandan state. Nyamwasa had also been the target of apparent assassination attempts in 2010 blaming the Rwandan state for the attempts on his life. Rwanda has emphatically denied any involvement in the murder.

Its high commissioner to South Africa, Vincent Karega, told The Star it did not make sense to blame his government for Karegeya’s death, considering the former intelligence chief had been in South Africa for a number of years.

“Why would we have waited six years?” he asked.

One of the biggest stories coming out of the African continent continues to be the parlous situation in the Central African Republic. There has been no respite in violence in the beleaguered country in the last three weeks. If anything, reports from the capital Bangui and outlying areas indicate a state that is teetering on the brink of collapse. One thousand six hundred French troops and 4,000 Africans have been deployed as peacekeepers to the country without much success.

More than 1,000 people are said to have been killed in the Central African Republic since December. According to Medecins Sans Frontiers (MSF), an estimated 300,000 to 400,000 people in Bangui have been displaced (out of a total population of 600,000). And the UN refugee agency (UNHCR) said on Friday that nearly a million people, a fifth of the population, has been displaced throughout the country.

A flare-up in violence between Muslim fighters and Christian militias has displaced more than 200,000 people in the past few weeks alone, leaving a total of 935,000 homeless.

In the capital, some 100,000 people have sought shelter in makeshift camps at Bangui airport (this number is increasing, and is up from 70,000 last week). Relief efforts are being hampered by the violence and many aid agencies have evacuated their staff. MSF is currently the only medical provider at the airport camp.

“While African Union forces and French army troops are present in Bangui, the situation nonetheless appears out of control,” the medical charity said in a statement on Friday. “Fighting and shooting is now taking place even within the confinements of the camps.”

The violence appears to be spilling over the borders of CAR: two soldiers were killed last Thursday at a border village in neighbouring Cameroon when unidentified gunmen from the Central African Republic reportedly attacked a military outpost. Five of the gunmen were also killed.

The interim government of the Central African Republic appear to have their heads firmly lodged in the sand – Reuters reports the government has called on citizens to return to work.

“The country has fallen and the national economy is at the bottom of an abyss — and that’s why civil servants should go back to work as early as 6 January to boost the country,” the minister of public works, Gaston Makozangba, said in a message played on repeat on state radio.

In the meantime, Senegal, Chad, Mali and Niger have all evacuated their citizens. France may be soon bolster its presence in the country – a recent poll showed that public support for a French military intervention in the country is increasing.

It certainly has not been a very pleasant start to the year for some parts of the continent. And the DRC, fresh from some success in pushing back rebel insurgents in the east of the country, was rocked by a daring attempt in the capital Kinshasa last week. Security forces killed at least 46 fighters after armed men opened fire on multiple sites across the capital.

The assailants launched a coordinated attack on the city’s airport, a military camp and the state television station RTNC last Monday in what appeared to be an attempt to seize power by supporters of Paul Joseph Mukungubila, a religious leader.

Speaking to the AP news agency from an undisclosed location, Mukungubila, an evangelical Christian pastor who has been critical of the government, said his supporters were behind the attacks, but that they had been armed only with sticks. He said they were angry after the military had attacked his residence in the early hours of Monday morning.

“My disciples were angry. And they took what they could which was a bunch of sticks. My disciples were never armed. They went to show what we are capable of. I am a man of peace, and this was not a premeditated action,” he told AP.

The South African government swiftly condemned the rebel attacks. A statement released by the Department of International Relations and Co-Operation last Tuesday expressed South Africa’s dismay with events in Kinshasa, saying South Africa rejected the use of force, which threatened to destabilise the DRC, and undermined peace efforts.

“South Africa will continue to support the role of SADC (Southern African Development Community), AU (African Union) and the UN (United Nations) in supporting the government and the people of the DRC in their efforts to consolidate peace, security and stability throughout the country,” Dirco spokesperson Clayson Monyela said in the statement.

The news for the DRC however has not gotten much better since the Kinshasa attacks.

On January 2, a government spokesperson revealed that the commander of government troops fighting rebels in the east of the country had been killed. Colonel Mamadou Ndala died along with two bodyguards in an ambush in North Kivu province, the spokesman said. Col Ndala was credited with defeating the M23 rebel group in November.

His death is said to be the work of the rebel Alliance of Democratic Forces and National Army for the Liberation of Uganda (ADF-Nalu), a Ugandan rebel group with an Islamist orientation.

The same group also saw South African troops in the DRC come out fighting on Christmas Day after it captured the town of Kamangu.

“South African helicopters in the UN intervention force were asked by FARDC (the DR Congo army) to give them support to recapture Kamango,” a senior officer with the UN mission to DR Congo (Monusco), has been quoted as saying.

And while the town has been recaptured, the battle continues.

More than 1,000 people have died, and at least 180,000 people have been displaced since an apparent civil war broke out in the world’s newest country on 15 December after the president, Salva Kiir, accused his deputy, Riek Machar, of attempting a coup.

Since then army units loyal to the president have been pitted against a loose alliance of ethnic militia forces and mutinous army commanders headed by Machar. The fighting then essentially involves two trained armies, as the rebel forces include former army units.

For his part, Machar has denied the accusation of a coup attempt, and in turn accuses the president of an organised campaign of violence against his rivals.

Meanwhile, direct peace talks representatives of the Kiir and Machar began on Sunday in Addis Ababa, Ethiopia. Key issues are establishing a ceasefire, and the rebels’ demand for the release of what they see as political prisoners.

But South Sudan spokesman, Michael Makuei, said the government would resist international pressure to free supporters of Machar arrested in Juba at the start of the conflict.

“Are we not risking the governments of Africa and the rest of the world to such attempts?” he asked. “We should not be arm-twisted because we are a new nation.”

Meanwhile, fighting in the Unity and Upper Nile states continued on Sunday.