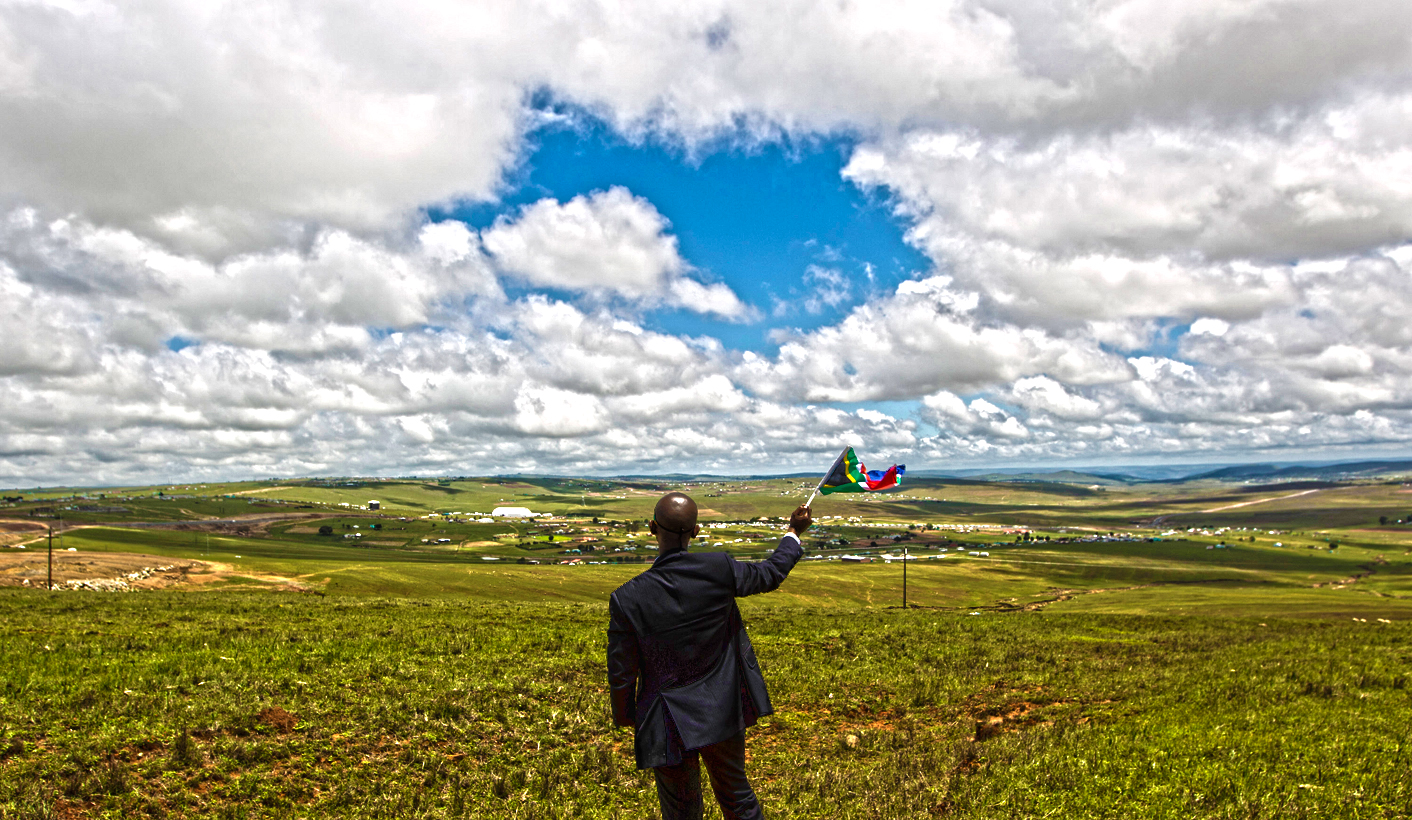 It was the end of the greatest love story, the one of Nelson Mandela and his people. His was a life dedicated to political struggle, to the fight for human rights, to a society free of discrimination, injustice and inequality. But it was also a love story that perhaps only now we are truly beginning to understand. Since Nelson Mandela’s death, the outpouring of grief and remembrance of his outreach and acts of love in South Africa and around the world has been unparalleled. His funeral and burial on Sunday was an impressive showcase by the South African government and the armed forces, interspersed with traditional rituals. Was that what Mandela had in mind though when he expressed his wish to be buried at his sprawling home village of Qunu? Did we give our Madiba the best goodbye? By RANJENI MUNUSAMY.

Around midday, the clouds gathered dramatically over Qunu’s impossibly big sky, casting shadows on the hillsides. The Last Post echoed over the valley. Thousands wept, some bit their lips. Through the clouds, military helicopters came into sight, the South African flag fluttering below them. A 21-gun salute shook the earth, billowing smoke. On a hillside overlooking the burial ground, abaThembu warriors in traditional dress marched and chanted in unison. A group of Gripen fighter jets thundered overhead; one broke away and soared straight up through the clouds high into the sky. The moment was perfect in its grandness and in its sadness.

It was done. Nelson Mandela was in his final resting place.

The planet continued to rotate on its axis, the wind swept the vast grasslands, the clouds floated gently by. Such is the way of the world that even so great an event that made millions pause for a while, the façade of normality takes over soon.

Yet Mandela was not ordinary. No ordinary being could love so much and give so completely. How does the earth bid farewell to a force of nature?

Nothing that could have been said or done over the 10-day period of national mourning would have been adequate for South Africa to send off its greatest son. Mandela’s 95 years of life was just too exceptional, too magnificent, too great to capture in memorials and tributes. He gave every part of himself in service to others, his love knew no bounds.

But it had to be done. Freedom fighter, founding president, global icon – all had to be reflected in a valediction like no other. According to General Bantu Holomisa, it took eight years of behind-the-scenes planning to arrange the funeral, taking into account the requirements of a state funeral with full military honours and the wishes of the family.

The end result was a display of grandeur, with the who’s who of South Africa’s political elite and high society housed under a giant structure which is apparently the great oeuvre of marquee design. The opulence was presented as a great exaltation of Mandela, and with a worldwide audience watching, perhaps it made sense that no expense was spared.

Still, the giant makeshift auditorium on the hill cocooned the elites away from the rest of the world, leaving the residents of Qunu to either stay home and mourn Mandela privately or navigate the hills to public screening areas.

Nelson Mandela yearned for Qunu when he was imprisoned and later when he was working his wonders as a free man. It is not difficult to see why – the rolling hills and valleys are achingly beautiful, the great stretches of pastoral land around his home define the meaning of idyllic.

But when Mandela expressed his desire that the place of his birth be his final resting place, was it the location he wished for or was it a desire to return to be among his people? He had even said repeatedly that he wished to breathe his last in Qunu, to be among his own in his final moments. But the superior medical care Mandela required did not allow this, and perhaps there will always be regret that he did not get what he desired.

The state, together with Mandela’s family, decided that the ordinary people were not worthy of being part of the funeral, and were barricaded away by the army and police. It was to be the preserve of the new political elite and the rich and famous. No freedom songs of yesteryear, no t-shirts and flags – nothing that would reflect that a revolutionary was being celebrated.

Like the national memorial service at FNB stadium on Tuesday, the funeral programme comprised prayers, family tributes, speeches by foreign heads of government and an oration by South Africa’s President Jacob Zuma. Fellow Robben Island prisoner Ahmed Kathrada was billed on the programme as “close friend”. From his speech, the depth of their relationship and that of the “A Team” of the ANC – most of which have now passed – is beyond understanding to an outsider.

His voice quivering, Kathrada told of the last time he saw Mandela alive. “I was filled with an overwhelming mixture of sadness, emotion and pride. He tightly held my hand until the end of my brief visit. It was profoundly heartbreaking. It brought me to the verge of tears when my thoughts automatically flashed back to the picture of the man I grew up under. How I wished I’d never had to confront the reality of what I saw,” Kathrada said.

His concluding line cut deep: Kathrada concluded: “When Walter (Sisulu) died, I lost a father and now I have lost a brother. My life is in a void and I don’t know who to turn to.”

Mandela’s granddaughter Nandi gave insight into the family man, with delightful anecdotes of banter and teasing with his offspring. She held back on the smarting and pain that always interlace commentary of his life by members of his family. She steered clear of the resentment of always having to share him with the world and having to take second place to his higher calling.

In the dearth of strong, inspirational political leadership on the continent and in South Africa, Malawi’s President Joyce Banda stepped up – speaking in her capacity as chair of the regional community, SADC. She said Mandela had inspired her to become the first female president in southern Africa.

It was Mandela who showed her how to become and act like a president, she said, and forgive those who had transgressed.

President Zuma had the biggest task of his life. He had to capture the moment in his country, in the world. He had to stand as the custodian of the ANC who produced a legion of legends and tell the world how it would keep the memory and legacy of Nelson Mandela alive. He had to rise to the occasion and say where he would lead Mandela’s country to, now that its True North had taken leave.

Zuma’s eulogy was in part directly addressing Mandela, thanking him “for being everything we wanted and needed in a leader during a difficult period in our lives”.

“Whilst your long walk to freedom has ended in the physical sense, our own journey continues. We have to continue building the type of society you worked tirelessly to construct. We have to take your legacy forward.

“One thing we can assure you of today Tata, as you take your final steps, is that South Africa will continue to rise,” Zuma said.

It was perhaps the right words. It just did not carry the weight they required.

Zuma’s concluding words were the sentiments prevalent throughout the week of mourning: “You will remain our guiding light, illuminating the path as we continue the long journey to build the South Africa of your dreams.”

But can it be done? If Nelson Mandela wishes for his death and his funeral could not be fulfilled, can the dreams for his country still be kept alive? Can South Africa, emerging from a vortex of grief and loss, now recalibrate and find its way?

For many, Mandela’s passing is an end to a golden age, of a romance of political accomplishment and enlightenment. The ANC has already strayed far from epoch of a heroic past; and South Africa is without proper direction. Perhaps Mandela’s death is the jolt the country needed to change path. Perhaps it is not too late to get back on course.

Mandela’s life, words and deeds are now immortal. It is up to the people he so loved to find meaning and direction from its beacon. But that light will only be visible if we keep looking up for it. DM

Photo: A man waves a South African national flag as he looks out toward the grave of former South African President Nelson Mandela in Qunu, December 15, 2013. REUTERS/Rogan Ward