Mandela's funeral: Teach your children well, so they ca...

Mandela’s funeral: Teach your children well, so they can learn from history 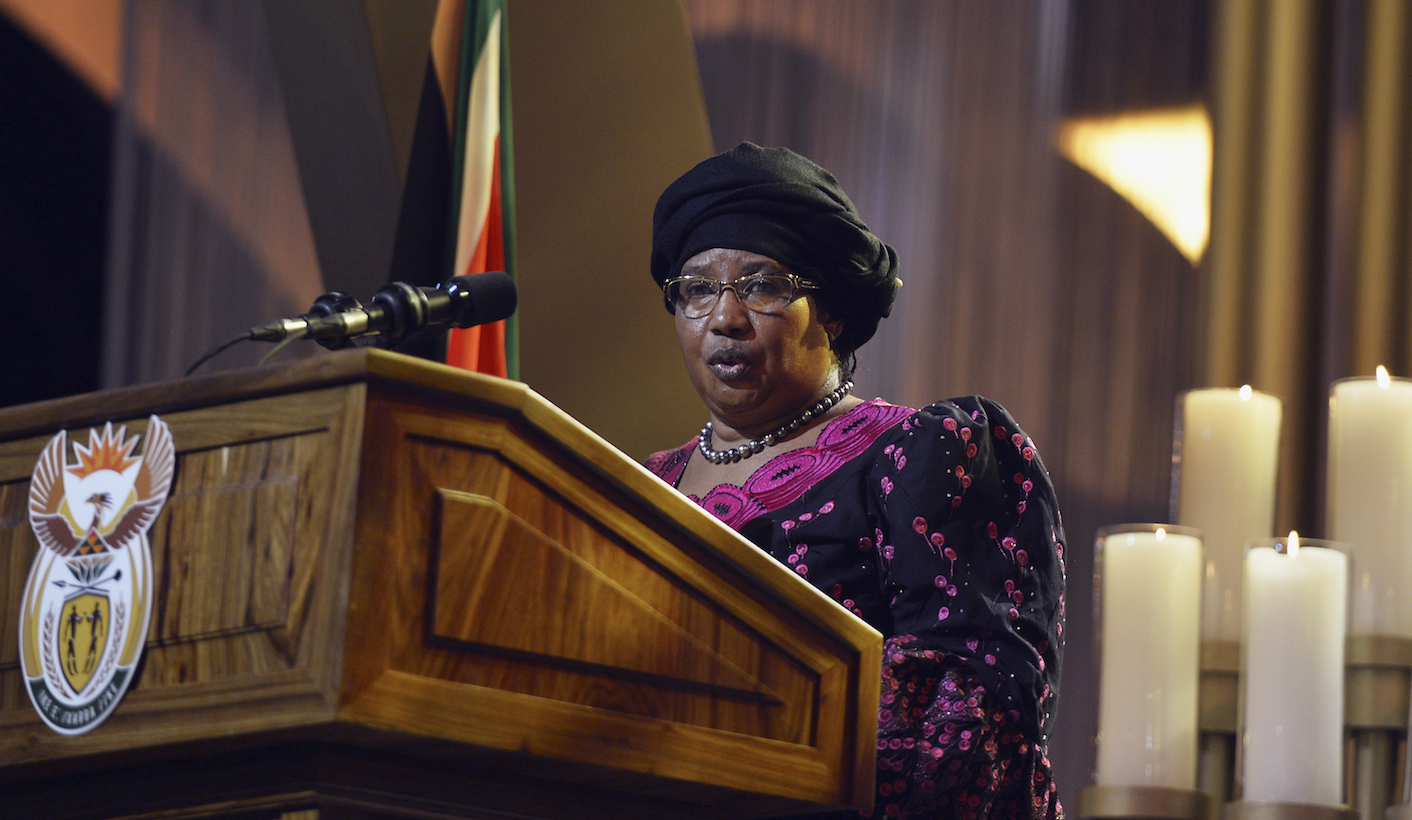 After a week of awkward missed cues and missteps amidst the national mourning of the death of the nation’s first democratically elected president at the age of 95, the final public funeral service on 15 December in Qunu became a history lesson to locate South Africa’s struggles squarely in the wider African context. J. BROOKS SPECTOR looks back at the day’s ceremony.

In the Tuesday memorial service at FNB Stadium in Soweto, most of the rhetoric (Archbishop Tutu, President Obama, and President Castro’s efforts excepted) had served up warmed-over, by-the-numbers efforts – with many acutely disenchanted by these efforts. Along the way, the boo-birds in the stadium, the schizophrenic gibberish-signing interpreter, the inclement weather, and the South African president’s own lacklustre – at best – eulogy had all contributed to a distinctly letdown feeling for many – a sense that the memorial service had not reflected accurately the nation’s feelings for Nelson Mandela.

But then, the more intimate (if close to five thousand people can be said to be intimate) service in Qunu on Sunday offered a summing-up of the meaning and purpose of a man’s life – recalling and honouring the late Nelson Mandela’s immense achievements. And, it also served to join South Africa’s own past with that of the history of the continent as a whole – and the many Africans who had aided and abetted South Africa’s own struggles.

After lifelong Mandela comrade-in-arms Ahmed Kathrada had delivered a heart-wrenching eulogy – explaining that if after the death of another struggle hero, Walter Sisulu, he had lost his revolutionary father, with Mandela’s passing he had now lost his brother and mentor – a series of African leaders explored how Nelson Mandela had been at one with the continent of Africa – and it with him. Kathrada had extolled his more than sixty-year friendship, saying of his friend, “Your abundant reserves of love, simplicity, honesty, service, humility, care, courage, foresight, patience, tolerance, equality, justice continually serve as a source of enormous strength to many millions of people in South Africa and the world.”

Then, AU chairperson and Ethiopian Prime Minister, Hailemariam Desalegn, Malawian President and SADC Chairperson, Joyce Banda, Tanzanian President, Jakaya Kikwete, and Zambia’s first president, Kenneth Kaunda, provided a four-part summary of Mandela’s crucial connetion to the continent throughout his own lifetime as a central figure in the ANC’s liberation struggle.

Ethiopia was, of course, the nation where Nelson Mandela had famously received his first real military training and that gift pistol from the then-emperor, Haile Selassie. (The pistol famously went missing in the midst of the police raid on Lilliesleaf Farm – it had been buried somewhere in the garden beyond the farm cottage. Ever since, it has been the subject of an intense search for what would be one of the most coveted of liberation struggle artefacts.) On Sunday, the Ethiopian prime minister had said, “Madiba’s life was the mirror image of the continent for whose liberty he so relentless fought…If we fight injustice tooth and nail, if we persevere in the face of difficulty, we can ultimately prevail against the evil, no matter what the odds stacked against us.”

President Banda then delivered a powerful speech that spoke to freedom for all people – male and female – and even managed to take the air out of Jacob Zuma’s faux pas some weeks earlier when, in defending the e-toll system – had said Johannesburg’s new highways not being like roads in some African countries like Malawi. Her eulogy quickly generated admiring social media commentary – favourably comparing her to her South African counterpart. Banda has famously banned bling bling expenditures on the part of her senior government officials – a point not missed in the minds of many in South Africa. In speaking of the living embodiment of reconciliation as state policy, in a phrase that will be quoted again and again in the years to come, she had said, “When I became president of Malawi, I had been isolated, humiliated and there was an assassination attempt on my life. I found myself in a situation where I had to work with those same people who had prevented me from becoming president of my country. I had to forgive and do so without any effort because my Madiba had prepared me.”

Following President Banda, Tanzanian president Jakaya Kikwete then took the podium to put a spotlight on his own nation’s sometimes under-appreciated role in supporting Southern Africa’s liberation struggles. He talked about the ANC’s schools, training camps and Radio Freedom operations in Tanzania back when the fragile Tanzanian economy could barely support itself. And he reminisced about Nelson Mandela’s possession of a Tanzanian travel document. But refusing to stay with the high-concept abstractions that so many have fallen back on in political eulogies, Kikwete also found a way to explore Mandela’s umbilical connection to Tanzania – and, indeed, to the entire continent – through the deceptively simple story of one ordinary pair of shoes.

As Kikwete told the story, Mandela had left a pair of boots in the home of Cyril Swai in 1962 in Dar es Salaam during his secret trip through Africa to build up support for the ANC. Kikwete said Mandela had intended to return to Dar later in order to retrieve his boots. But, of course, a quarter of a century of incarceration had intervened. Kikwete said, “In order to keep the visit discreet, he did not stay in hotels. He stayed at the house of Cyril Swai. On his departure, he left behind his boots in the hope that on his way back he would pick up his boots.”

Despite the apparent hopelessness of any retrieval of those Mandela boots, the Swai family faithfully preserved them for over thirty years and then returned them to Mandela in 1995 when, as South Africa’s president instead of being “The African Pimpernel”, he paid an official visit to Dar es Salaam.   Making that circle complete, Kikwete said that while Cyril Swai had died shortly after Mandela became president, his widow was attending this very funeral service.

Then, sentimental crowd favourite, Kenneth Kaunda, Zambia’s first president took his unscheduled turn at the dais to offer his spin on South Africa and Mandela’s connections to his own nation. Despite being chivvied by program chair Cyril Ramaphosa for him to speak briefly so that the actual burial ceremony could take place at the planned time, KK wove in a reference to his famous Victoria Falls railroad bridge meeting with the BJ Vorster in 1975, thereby using that meeting to hint at the fact that dialogue and reconciliation between black and white in Southern Africa had always been a tantalizing possibility.

Taken together, these four intertwined eulogies from Ethiopian, Tanzanian, Malawian and Zambian leaders and a former leader drove home the point that the road both Nelson Mandela and South Africa had travelled had not been something that had occurred exclusively to that country alone. In effect, it was a joint, four-part homily, teaching that John Donne had been right, all those many years ago, when he had so famously written:

No man is an island,

Every man is a piece of the continent,

A part of the main.

But the speeches gave one further lesson – that learning history is insufficient – unless one learns from it and applies those lessons. Or, as award-winning actor-playwright John Kani had said the other day at another memorial event: “Madiba is now an Ancestor; therefore we must now ask whether he would approve of whatever we do.”

The question is, of course, whether the new leaders will hear – and heed – this injunction. DM