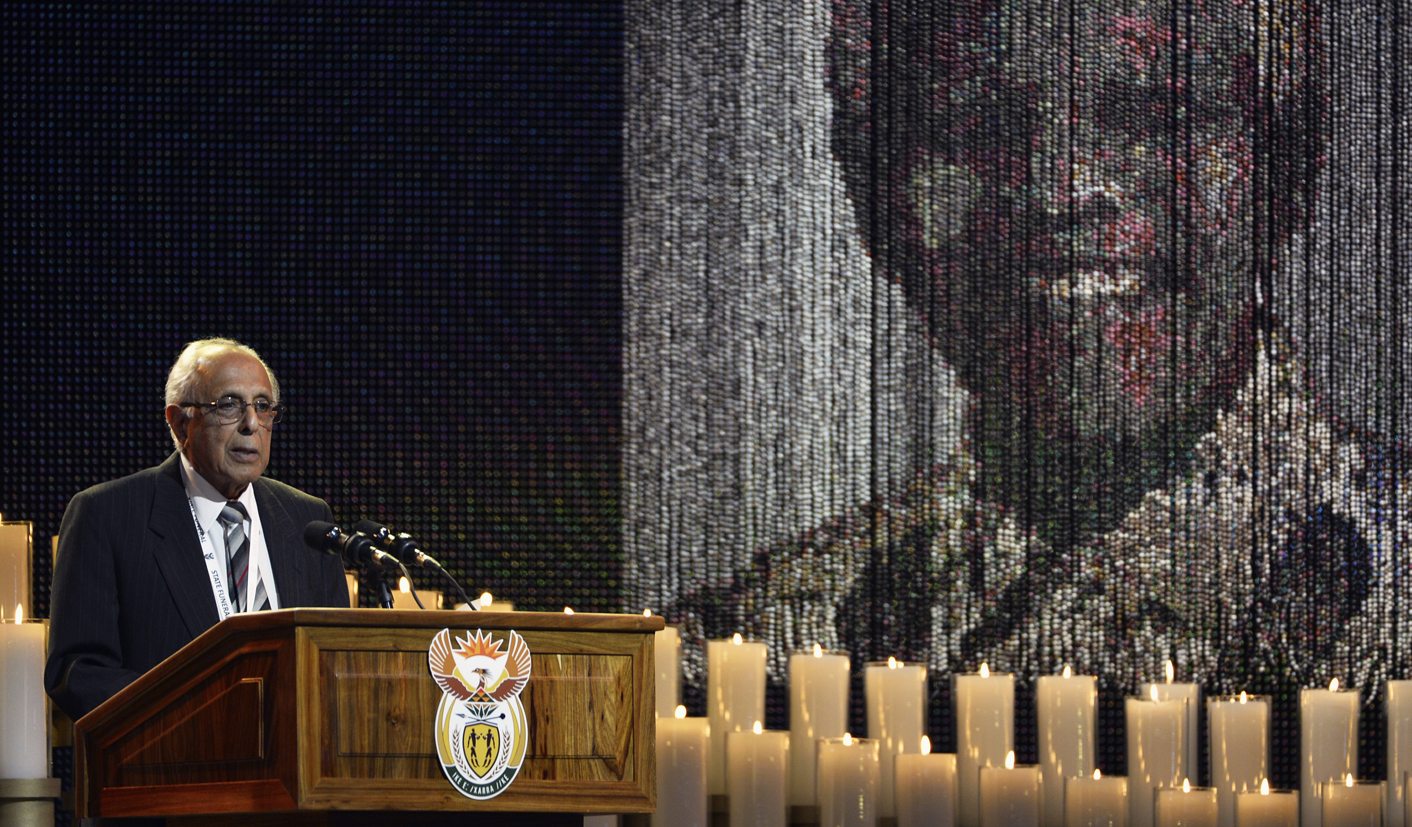 Nelson Mandela's close friend bids farewell to his 'elder brother' at the funeral in Qunu on Sunday.

The last time I saw Madiba alive was when I visited him in hospital. I was filled with an overwhelming mixture of sadness, emotion and pride. He tightly held my hand until the end of my brief visit. It was profoundly heartbreaking. It brought me to the verge of tears when my thoughts automatically flashed back to the picture of the man I grew up under. How I wished I’d never had to confront the reality of what I saw.

I first met Madiba in 1946; that’s 67 years ago. I recalled the tall, healthy and strong man; the boxer; the prisoner who easily wielded the pick and shovel at the lime quarry on Robben Island. I visualized the prisoner that vigorously exercised every morning before we were unlocked. What I saw at his home after his spell in hospital was this giant of a man, helpless and reduced to a shadow of his former self.

And now the inevitable has happened. He has left us and is now with the “A Team” of the ANC – the ANC in which he cut his political teeth; and the ANC for whose policy of a non-racial, non-sexist, democratic and prosperous South Africa he was prepared to die.

He has joined the “A Team” of his close comrades:

We have been blessed that under the collective leadership of the ANC, we can proudly proclaiming that “South Africa belongs to all who live in it, black and white”. We were mightily, and unexpectedly, blessed when the old, oppressive, undemocratic order succumbed and bowed to the inevitable. And then finally, we were truly blessed by the far-sighted wisdom of our collective leadership – with Madiba at the helm – that took us into a democratic future. For all of this and much more, we are deeply grateful.

We are fortunate that today we live in a noisy and lively democracy. We are eternally grateful that dignity has been restored to all South Africans. We are forever grateful that the lives of many are improving, although not enough yet. We are deeply grateful for a Constitution that encompasses all that is good in us and a constitutional order that protects our hard-won freedom. Finally, we are infinitely grateful that each and every one of us, whether we are African, White, Coloured or Indian, can proudly call ourselves South Africans.

Mindful of our gains, we nevertheless know that a long, long road lies ahead, with many twists and turns, sometimes through difficult and trying times. Poverty, ill-health and hunger still stalk our land. Greed and avarice show their ugly faces. Xenophobia and intolerance play their mischief in our beautiful land. Parts of the world out there find themselves in unhappy situations; economies falter and stagger; extremism and fundamentalism of all kinds are rampant; the earth reels from climate change, and the poor battle to survive. Ferocious struggles for democracy unfold daily before our very eyes and the numbers of political prisoners grow in step with rising intolerance. For instance, we think of the Palestinian Marwan Barghouti, who is languishing in an Israeli prison. All of these people and prisoners throughout the world will continue to draw inspiration from the life and legacy of Mandela.

And finally Mr. President, I wish to address myself directly to Madala, as we called each other. What do we say to you in these, the last final moments together, before you exit the public stage forever?

Madala, your abundant reserves of love, simplicity, honesty, service, humility, care, courage, foresight, patience, tolerance, equality and justice, continually served as a source of enormous strength to many millions of people in South Africa and the world. You symbolize today, and always will, qualities of collective leadership, reconciliation, unity and forgiveness. You strove daily to build a united, non-racial, non-sexist and democratic South Africa.

In this spirit, so exemplified in your life, it is up to the present and next generations to take up the cudgels where you have left off. It is up to them, through service to deepen our democracy; entrench and defend our Constitution; eradicate poverty; eliminate inequality; fight corruption, and serve always with compassion, respect, integrity and tolerance. Above all, they must build our nation and break down the barriers that still divide us.

Xenophobia, racism and sexism must be fought with tenacity, wisdom and enlightenment. Anything that defines someone else as ‘the other’, has to go. Tolerance and understanding must flourish and grow. In all these actions we are and will be guided by your wisdom and deeds.

Today, mingled with our grief is the enormous pride that one of our own has during your life, and now in your death, united the people of South Africa and the entire world on a scale never experienced before in history. Remarkably, in these last few days, the masses of our people, from whatever walk of life, have demonstrated how very connected they feel to you; how the story of your life is their story and how their story is your story. Madala, you captured this relationship beautifully on the occasion of Walter Sisulu’s death, when you said:

“We shared the joy of living, and the pain. Together we shared ideas, forged common commitments. We walked side by side through the valley of death, nursing each other’s bruises, holding each other up when our steps faltered. Together we savoured the taste of freedom!”

To Mrs. Graca Machel and the Mandela family, our love, respect and support go out to you. We wish there was a way that we could ease your grief and pain. These last few months, have been particularly hard, and we trust that in the ensuing weeks you will be able to find the rest and peace you need so much. We mourn with you and wish you strength in this time of need.

Madala, while we may be drowned in sorrow and grief, we salute you as a fighter for freedom to the end. Farewell my elder brother, my mentor, my leader. With all the energy and determination at our command, we pledge to join the people of South Africa and the world to perpetuate the ideals and values for which you have devoted your life.