SERI’s fight for justice and reconciliation: from the TRC to Farlam 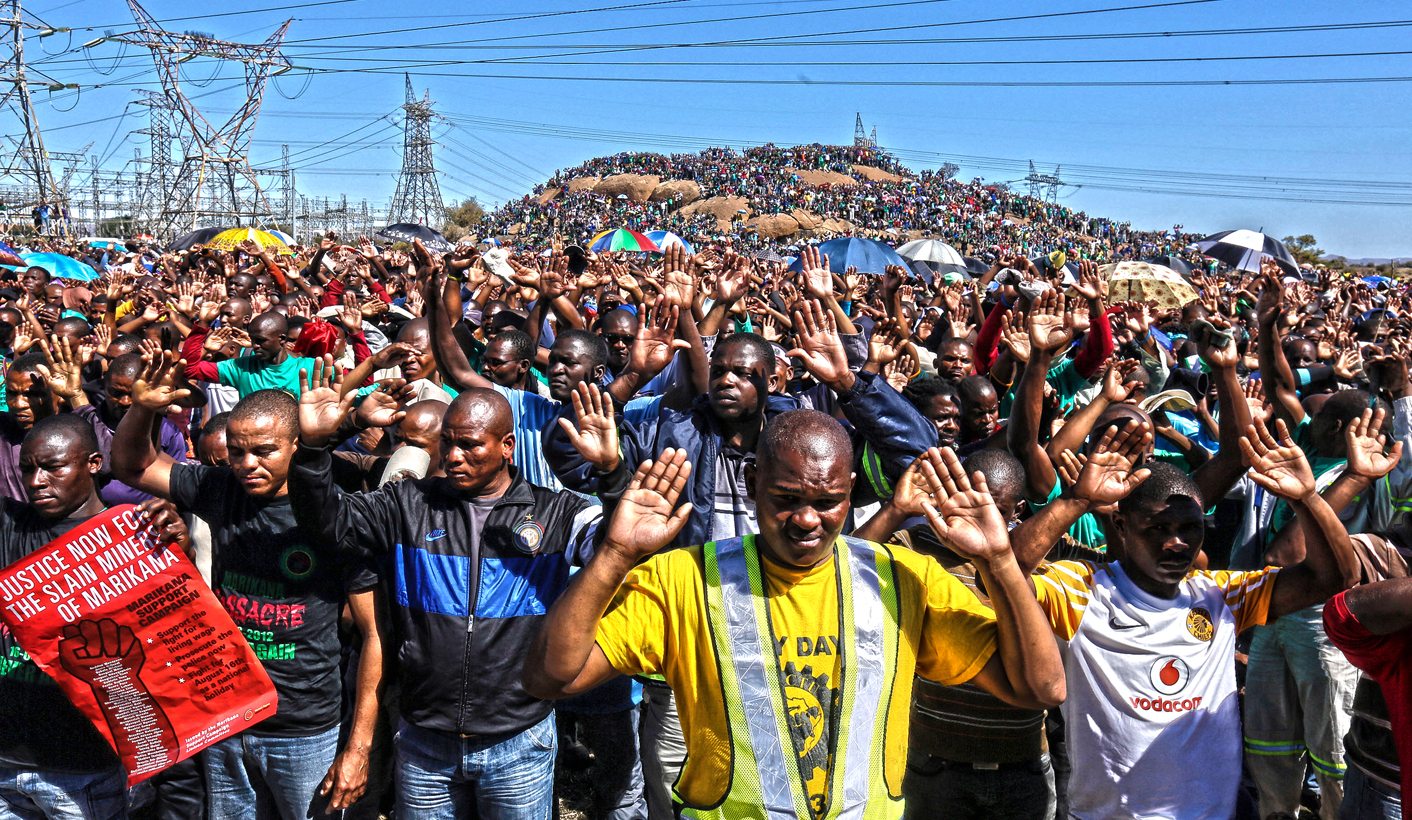 Comparisons between the TRC and the Farlam Commission into Marikana were the order of the day on Wednesday, when SERI (the Socio-Economic Rights Institute) was awarded the annual Reconciliation Award by the Institute for Justice and Reconciliation for “keeping the Marikana victims and their families on the national agenda”. Archbishop Desmond Tutu was on hand to deliver one of his increasingly pained laments on the state of the nation. By REBECCA DAVIS.

Khulumani has been raising these issues to government and the Department of Justice for the last ten years. In a letter to Parliament’s Portfolio Committee on Justice and Constitutional Development, the group wrote: “We are now entering 20 years since the election of a constitutional democracy in South Africa, yet despite many promises and structures aimed at providing redress for those people damaged by violations during our Apartheid past, our constitutionally elected government has not delivered restitution.” Instead, the group wrote, “government is now intent on dismantling even those incomplete structures that were created to provide such restitution.”

The spectre of the TRC and its unfulfilled mandate was invoked several times at a Cape Town ceremony on Wednesday, hosted by the Institute for Justice and Reconciliation (IJR), itself an organisation formed in the aftermath of the TRC. The occasion was the awarding of the annual IJR Reconciliation Award, given annually to “an individual, community or organisation in South Africa that has contributed towards reconciliation”. That seems awfully broad, and the diversity of past recipients testifies to that: from Judge Albie Sachs (2009) to musicians PJ Powers and Sibongile Khumalo (2002).

Against this backdrop, SERI – a non-profit which carries out public interest litigation – is arguably one of the most deserving of the prize’s recipients. It is SERI who is representing 36 families of striking miners killed by police at Marikana at the Farlam Commission, in a legal team headed by former TRC commissioner Dumisa Ntsebeza. (“He’s one of the biggest trouble-makers we have,” Wilson joked of Ntsebeza. “Tell me something I don’t know,” cracked back the Arch affectionately, wagging his finger at his old friend.)

The TRC and the Farlam Inquiry were both set up to investigate acts of brutality committed by the state. The fact that the former interrogated acts of the Apartheid government and the latter, acts of the government of liberation, was a point of poignancy not lost on the speakers at Wednesday night’s event. “The shock of Marikana is that we did go there again [after Apartheid],” Du Toit said. “It is clear that there was a military-style operation with overwhelming force where live ammunition was shot at South African citizens and killed them en masse.”

Author Zubeida Jaffer described her response to driving through her suburb last August and seeing newspaper placards announcing a “Marikana massacre”. Where could this have happened, Jaffer wondered: Kenya? Sudan? “Not once did I consider it could be in our country.”

One of the most important lessons to apply from the TRC to the Farlam Commission, Du Toit suggested, was the notion of victim-centred, rather than perpetrator-centred, justice. He paid tribute to SERI’s role in this regard, in ensuring the “proper focus” was placed on the families who suffered losses at Marikana. “It was clear from the outset that this should be a commission for victims,” Wilson said. He spoke of the importance of bestowing humanity and dignity on the miners who died at Marikana.

“In the press you hear a lot of stuff about muti, and violent miners,” Wilson said. “This dehumanises ordinary working people who were protesting for a decent wage.” Wilson said it was “very hurtful” for the families of the deceased to hear police and others referring to their loved ones as “violence-crazed muti-takers”, a reference to the ongoing reports that the strikers believed they were “invincible” due to the use of muti before the massacre.

SERI’s Director of Litigation Teboho Mosikili described the media preoccupation with the muti issue as “disrespectful”. Wilson agreed, citing as comparison the fact that as a lapsed Roman Catholic, he had been told weekly that he was being nourished by the body and blood of Christ when accepting Holy Communion.

“I have never been dehumanised for holding that belief,” Wilson said. “The use of muti, or traditional medicine, or traditional practices prior to the 16th of August has been used in the most shameful way to dehumanise and to stereotype in a highly racialised manner ordinary, decent working men who had a legitimate grievance against Lonmin.”

As many perceive to have been the case with the TRC, there is the fear that the outcomes of the Farlam Inquiry may be inadequate. It already seems to be the case that the promise of reparations to the families of Marikana victims are not being fulfilled adequately, Du Toit said. He pointed to Lonmin’s pledge that the children of victims would have their education paid for – but at the school of Lonmin’s choice. As a result, he claimed, some families have had little choice but to send children as young as four years old to boarding school. Du Toit also said that the talk from Lonmin of replacing breadwinners’ jobs within victims’ families appears to be coming to naught.

Tutu – the chairman of the TRC – freely acknowledged the flaws of the TRC. “We are among the first to have admitted that the TRC was not perfect. It had many weaknesses,” Tutu said. “One of the most serious was that we could grant amnesty but all we could do was recommend reparations.” Ntsebeza vocally agreed from his position in the audience. Tutu sarcastically condemned the “princely sum” of R30,000 given as a one-off payment to some Apartheid victims identified by the TRC.

As is Tutu’s wont these days, he combined his trademark wisecracks with visible distress about the state of the nation. “I thought after ‘94 we oldies would be sitting on the sidelines watching our youngsters really transform this country,” he said. “You don’t know the incredible ache it is for us.”

He continued: “I land in Cape Town and I go into an airport which could be anywhere in the world, it is such a posh place. Then I drive out of the airport to Cape Town…It is unbelievable that I can look on my left hand side and say: ‘What have we done, for goodness’ sake?’”

If he collapsed and died on the spot, Tutu said he would tell God: “Look here, really in a way you cheated us.”

“You gave us the promise of a fantastic country, we have the capacity to be one of the most wonderful countries in the world.” This promise, he implied, remains unfulfilled.

Accepting the Reconciliation Award from Tutu, Wilson said SERI’s work on Marikana and other matters was guided by the sentiments expressed by a woman who testified at the TRC, Charity Kondile, whose son was killed and burned by security police under the command of Vlakplaas commander Dirk Coetzee. When Kondile was asked if she would forgive Coetzee in the same spirit of forgiveness demonstrated by Mandela and Tutu, she replied: “It is easy for Mandela and Tutu to forgive…they live vindicated lives. In my life nothing, not a single thing has changed since my son was burnt by barbarians…nothing. Therefore I cannot forgive.”

SERI, Wilson said, is “in the business of vindication”. DM

Photo: Miners gesture as they pray during the one-year anniversary commemorations to mark the killings of 34 striking platinum miners shot dead by police outside the Lonmin’s Marikana mine, August 16, 2013. (Reuters/Siphiwe Sibeko)