Joburg’s informal traders vs. He Who Sweeps Clean 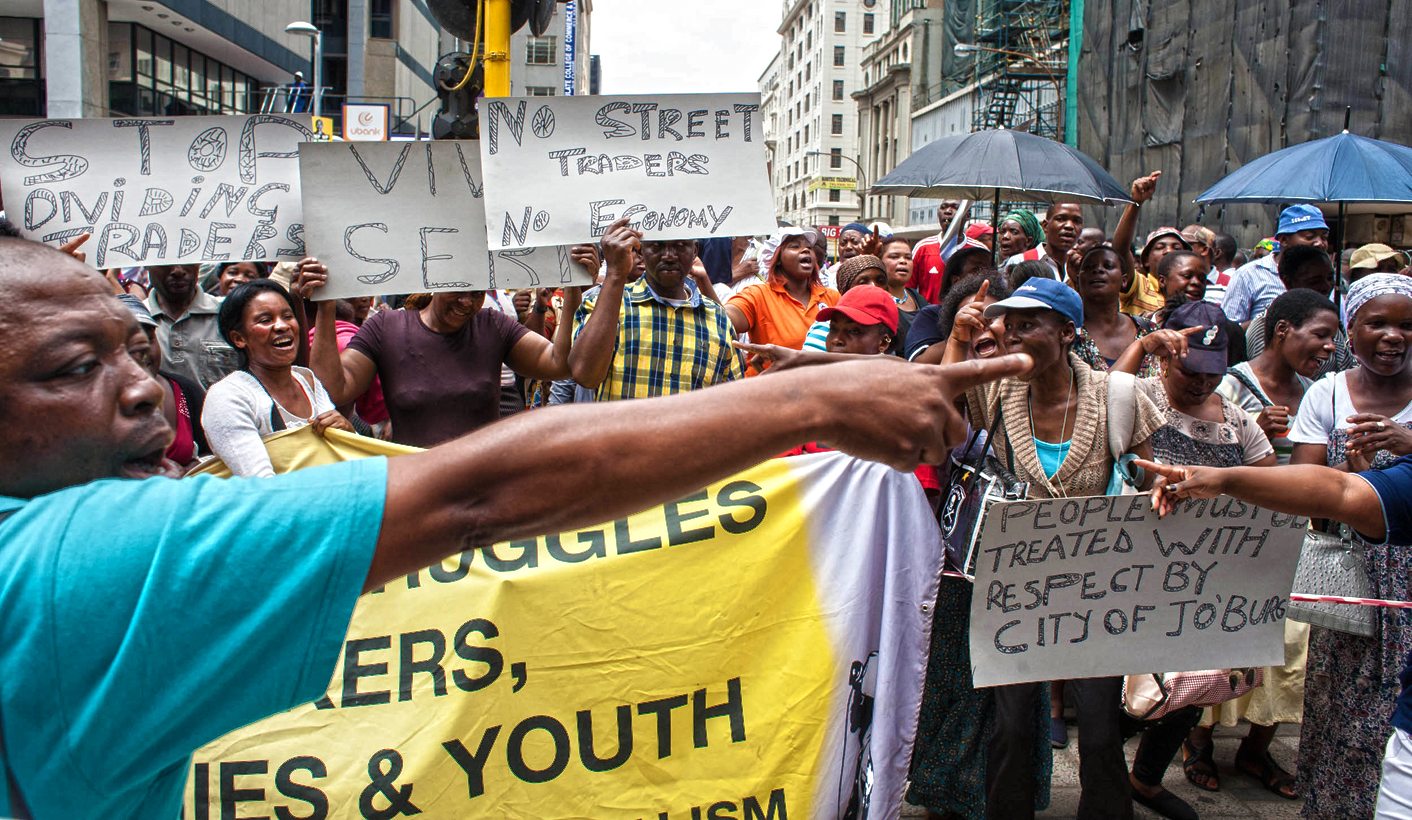 The South Gauteng High Court heard on Thursday that the City of Johannesburg has flouted its own rules during Operation Clean Sweep and left evicted informal traders destitute. The municipality's lawyers wouldn't deal with the meat of the case and continued their delaying tactics. Meanwhile, Clean Sweep is harming lives and the economy. By GREG NICOLSON.

Hundreds of traders gathered outside Johannesburg’s High Court in the morning as two cases were to be heard against the municipality. The Informal Traders Forum (ITF) and South African National Traders Association (Santra) both wanted an interdict against Operation Clean Sweep, which has put thousands of vendors out of work. The crowd of workers sang for their rights and waited eagerly to hear their fate ahead of the Christmas season. The court will determine whether they are able to buy their families presents, visit relatives, keep their homes and send their kids to school next year.

Thembeka Mathomane, 46, sold range of products in the streets around the Wanderers taxi rank, which was bustling with business but now is empty. “I was very, very affected,” she says of Mayor Parks Tau’s Clean Sweep. “Even now my stock is in my house. Some is rotting. What I am crying for is I don’t have a job. That was my job and paid for [my kids’] school fees.” Like many traders who were pushed off the streets, without any notice, she says, she walked around the city trying to sell what she could to get by. “When we were trying to sell like thieves the [JMPD] hit me with a sjambok.” She and her friends say the police refused to give them a receipt for the goods they confiscated, which breaches the law.

The aim of Tau’s Clean Sweep was to help reform what the municipality saw as lawlessness, filth and crime in the inner city. “Are we the rubbish as a people?” asks Mathomane’s friend. “They are calling us rubbish!” The ladies present the slips they paid to rent a trading stand, R100 a month, and the smart cards that show they are registered. They have since been through another verification process with the City but have not been allowed to return to work.

They will not be voting for the ANC in the next elections, they say. The rally was addressed by a number of political movements, including the Congress of the People, Economic Freedom Fighters and the Workers and Socialist Party.

Jones Mosime, 45, stood listening, holding aloft a copy of Nelson Mandela’s Long Walk to Freedom. Years ago, when he was unemployed, he started selling books on the street. A box of books from a neighbour made him R37 and he has sold books in central Johannesburg ever since. Mandela, says Mosime, helped South Africans achieve freedom, but told them they would have to work hard to make something of themselves. He says the municipality must recognise that traders, informal or formal, local or foreign, are providing for their families and the City must handle the issue with care. Mosime is angry that so many people were involved in the struggle against Apartheid, but those who were rewarded with political and government jobs have forgotten everyone else.

The municipality, meanwhile, has reached an agreement with some traders’ organisations. They are currently talking about guiding the relocation process and allocating stands. The City has consistently said it values the input informal traders have on the economy. But the problem with the current agreement, with only two of the informal traders’ organisations involved, is that many legal sellers will be excluded. The City’s current plans of verification and relocation only offer about half of the previous demarcated trading stalls.

The court hearing was delayed after the two applications against the municipality were combined. The key issue is whether the application is heard as a matter of urgency or whether it is added to the general roll and heard around March next year. Traders packed into the small courtroom, filling even the standing area and fanning themselves in the heat. Advocate Chris Georgiades for Santra, representing 1,200 registered and legal traders, argued that the municipality misled those on the streets. He said that when Clean Sweep began they were told they would temporarily be out of work while they were verified before they could return to the streets. Only later, when were they told certain areas demarcated for trading would no longer be permitted, they saw trading structures were demolished, and heard some legal traders would be relocated. He said his clients were not against cleaning up the city, but the City of Johannesburg completely flouted the Business Act and its own informal trading policies in the way it went about Clean Sweep.

“Our clients are destitute as a result of being moved,” he said, citing affidavits from informal traders who cannot pay rent or feed their families. Even the Constitution has been breached, said Kennedy.

The traders want a court order permitting those legally entitled to work on the streets to be able to continue selling. They want to be back in the spots they worked in. They want the structures they trade from rebuilt. If the City goes ahead with its plan, they want it to do so lawfully. “This is a crisis,” said Judge Ramarumo Monamo, who added that the case could have huge implications for Johannesburg.

Advocate Paul Kennedy for the ITF argued the matter has to be seen as urgent because although Clean Sweep started around October, the municipality’s plans were not informed to the traders until around 7 November. In fact, he said, no plan has been furnished from the City on what it actually intended to do with the traders. Early this month, it was considering making a plan, but was so vague on details to suggest it simply cleared the streets without considering at all what to do next with the sellers who had legal permits. The municipality had misled his clients and dragged out the process as long as possible, he said.

Advocate Gcina Malindi represented the respondents and decided not to respond to the real issues. Instead, in a sleepy speech, he argued the technicalities of urgency. He said the traders had ample time to launch a court action since the effects of Clean Sweep were being felt in October. They were simply trying to waste the court’s time, he argued, and even asked the traders to pay the municipality’s legal costs, a request Judge Monamo responded to by saying the traders have no money. “If the older people can do something wrong then the younger people will follow because they learn from that,” the judge advised.

Malindi said that the traders are out of work is nothing new in South Africa. “There can never be an appropriate time to act,” he counselled. If it’s not at Christmas time, it will be when children are starting school.

Outside the court, hundreds of informal traders waited for a decision on their livelihoods. What happened? We just want to return to work, they said. But judgment was reserved in the matter, without a date for delivery. Lawyers hope it will come today.

The effects of Clean Sweep, however, continue. Daily Maverick witnessed burly security guards, not police, confiscating belts and wallets from an informal trader. They then harassed a woman selling peanuts from a bucket. A young man selling cigarettes nearby kept his stock in a drain to avoid confiscation. Last week Friday, JMPD officers allegedly assaulted and arrested a female trader for taking pictures of their heavy-handed approach. The Socio-Economic Rights Institute (SERI), which is representing her case, calls her “Belinda”. “Throughout this ordeal, the traders were subject to xenophobic abuse. One trader was told that that the JMPD ‘would drag her with the car like the other guy from Maputo’. Belinda was told that ‘all of this is Mandela’s fault for having married Graca’,” said SERI.

Young men were still trading around the corner from the High Court, selling DVDs, socks, and other paraphernalia. In a city like Johannesburg, a hub of migrants from the continent and country, with everyone looking to make a living, it’s unlikely Clean Sweep will stop informal trading or even illegal trading. What it has done is put honest, hardworking people out of a job and opened up the streets to those who are brave or fast enough to take on the cops. DM

All photos by Greg Nicolson.