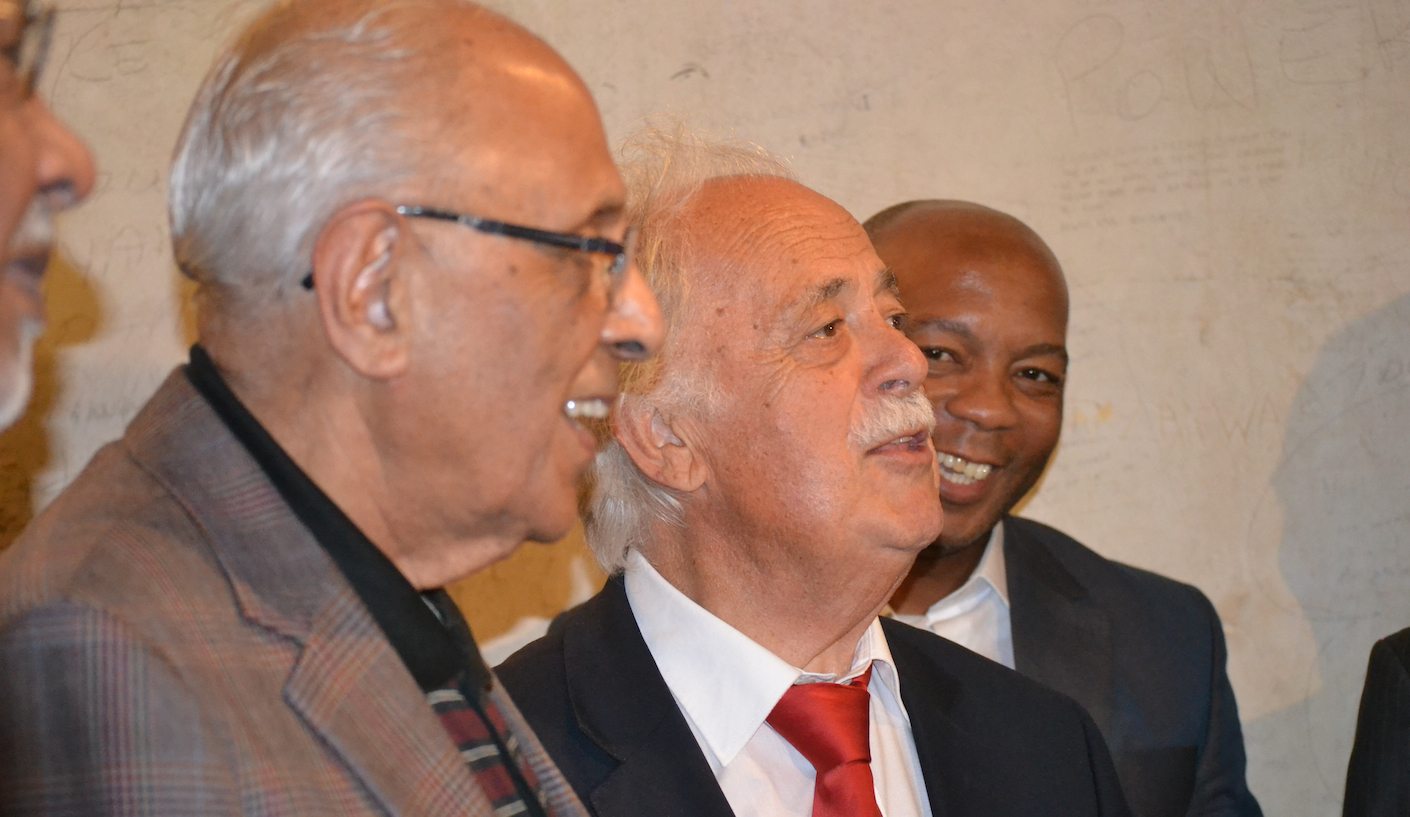 The 50th anniversary of the Rivonia Trial took place at the Palace of Justice in Pretoria last week. Such a commemoration is an acknowledgement of a vital turn in the destiny of South Africa. It ought also to be a moment for South Africa to reflect on the enormity of what it has overcome – and what must still be addressed. By KHADIJA PATEL.

Last week, the Ahmed Kathrada Foundation and the Tshwane branch of the African National Congress (ANC) commemorated the 50th anniversary of the Rivonia Treason Trial. Described as the “trial that changed South Africa”, the Rivonia Trial began in October 1963 and concluded with the sentencing to life in prison of eight of the ten accused. Among them were Walter Sisulu, Nelson Mandela, Govan Mbeki and Ahmed Kathrada.

An initial plan to host a mock-up of the trial as part of the commemoration was abandoned, as it was, after all, a trial that lasted for some months between 1963 and 1964.

Mac Maharaj, wearing an eye patch (which he said was to distinguish himself speaking in his personal capacity from his persona as presidential spokesperson) and who was tried in what is known as the “Little Rivonia Trial” which took place in November 1964 in Johannesburg, said the speech Mandela had made at the Rivonia trial was one of the most important speeches the icon ever made. He also noted that the author Alan Paton had testified in mitigation of sentence of the Rivonia trialists.

When the Rivonia Trial began at the Palace of Justice in Pretoria – after Justice De Wet agreed to a three-week postponement to allow the defence to prepare for trial – Nelson Mandela led the parade of defendants up a staircase that opened into the centre of the court, where a specially constructed dock had been built. Mandela lifted his fist in salute to the supporters who had gathered inside the courtroom and shouted, “Amandla!”

When the defence announced that Mandela would be taking the stand, prosecutor Percy Yutar appealed to the judge, “My Lord! My Lord, I think you should warn the accused that what he says from the dock has far less weight than if he submitted himself to cross-examination.”

Justice de Wet replied, “I think, Mr Yutar, that the counsel for the defence have sufficient experience to advise their clients without your assistance.”

In his autobiography, Long Walk to Freedom, Mandela writes of the speech:

“I had been reading my speech, and at this point I placed my papers on the defence table, and turned to face the judge. The courtroom became extremely quiet. I did not take my eyes off Justice de Wet as I spoke from memory the final words.

‘During my lifetime, I have dedicated myself to this struggle of the African people. I have fought against white domination, and I have fought against black domination. I have cherished the ideal of a democratic and free society in which all persons live together in harmony and with equal opportunities. It is an ideal which I hope to live for and to achieve. But if needs be, it is an ideal for which I am prepared to die.’

“The silence in the courtroom was now complete. At the end of the address, I simply sat down. I did not turn and face the gallery, though I felt all their eyes on me. The silence seemed to stretch for many minutes. But in fact lasted probably no more than thirty seconds, and then from the gallery I heard what sounded like a great sigh, a deep, collective ‘ummmmm’, followed by the cries of women.”

During the commemoration last week, Ahmed Kathrada returned to the holding cell at the Palace of Justice where Judge Jody Kollapen formally presented him with a key to the cell. Kathrada noted that while the Rivonia Treason Trial may be the best documented of South Africa’s political trials during Apartheid, there were many, many others that did not receive the same attention.

“The Rivonia Trial overshadowed many, many other trials,“ Kathrada said.

Inside the holding cell beneath the courtroom George Bizos said he would meet with the defendants of the in that very cell each morning during the trial. “We would consult with you, who are we going to call, what we are going to say, we knew that the place was bugged and we had paper on which we wrote key words and we would point to one another [and then the paper],” Bizos said, reminding Kathrada.

Kathrada then replied, “At the time George [Bizos] was involved in another case involving some bakery and every time he came from there he would bring us that long, French bread.”

Bizos interjected, “I didn’t pay for it. It was a well-wish.”

To which Mac Maharaj quipped, “So that’s where we learned to get things free?”

Bizos continued: “I just want to say the biggest mistake that the [Apartheid] government made was to try to characterise the accused in the dock and try to liken them to the gangsters of Germany, Italy.

“They got this man Yutar who was actually an incredible prosecutor but he made a fundamental mistake. He wanted to discredit the people in the dock as human beings. And particularly Walter Sisulu knocked him for sixes.

“He (Yutar) started his cross-examination with ‘Sisulu’, not ‘Mr Sisulu’. They started initially using only their first names and we put them right. ‘Sisulu you were brought to speak on behalf of the oppressed people of South Africa, how many members does the ANC have?’

“[Yutar]: ‘And you purport to speak for the benefit of all the people of South Africa?’”

To which Bizos said Sisulu had replied, “Mr Yutar, please tell me, how many members does the nationalist party have?”

Bizos added that Yutar had made frequent reference to “the so-called grievances of the African people”.

“Sisulu is the wisest man I have ever met politically, no doubt about it,” Bizos said, adding that Mandela too would first seek the counsel of Sisulu before making important political decisions.

“Walter lost his temper and said, ‘Mr Yutar, I understand you have a 15-year-old son?’

“’I also have a 15-year-old son, who came with his mother to the door of the court and he was taken to a police station that his mother and me don’t know where he is. I wish you were a black person for just one day and then you would stop talking about so-called grievances’,” Bizos quoted Sisulu.

Acknowledging Kathrada, thanking him for saving him from the gallows, Bizos said, “If anyone has to thank anyone for avoiding the death sentence it is the overzealousness of Yutar.”

Today, the South African Coat of Arms hangs in the courtroom in which the Rivonia Treason Trial took place. !ke e: /xarra //ke, “Diverse people unite”, the words inscribed on South Africa’s national symbol, call for the nation to unite in a common sense of belonging and national pride. Fifty years after the Rivonia Trial, it is remains impossible to understand the present without remembering the past. DM

Photo 1: The staircase leading to the courtroom.

Photo 2: The dock from which Nelson Mandela made his famous speech.