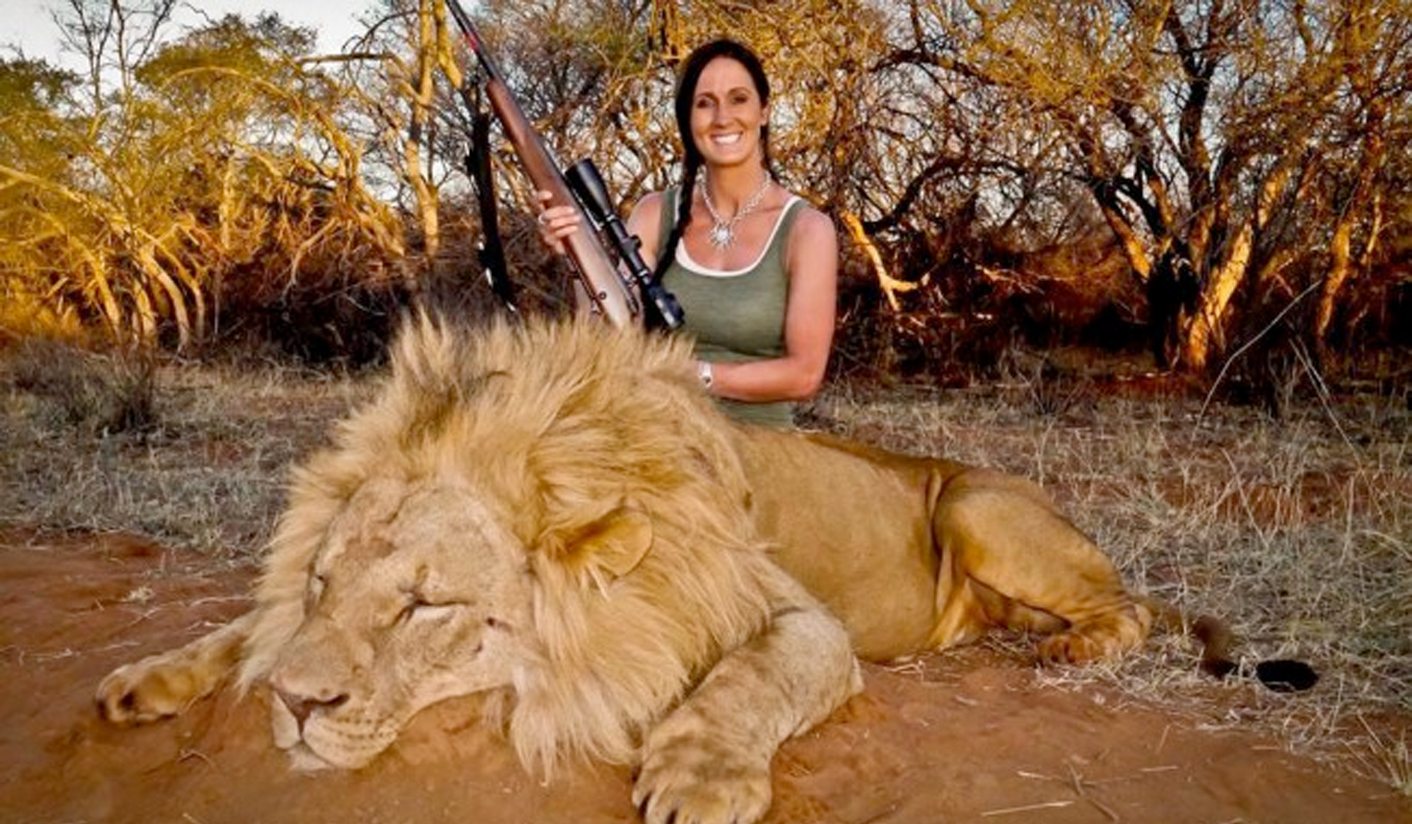 You may well find canned lion hunting morally repugnant. But responses to US hunter Melissa Bachman, photographed after shooting a lion in a Limpopo reserve, have been characterized by extraordinary violence and sexism. This vitriol is not even being aimed in the right direction. By REBECCA DAVIS.

“Never in my life have I been so disgusted by a human being.”

“A barbaric and disgusting blight to civilisation.”

“A disgusting disgrace to the human race.”

Who on earth could we be talking about here, folks? Adolf Hitler? Pol Pot? Queen Mary 1? Nope; these are social media responses to Melissa Bachman, an American TV presenter who posted a picture on Twitter and Facebook of a male lion she had allegedly just shot and killed in South Africa.

Let’s get a few things out of the way first. I have no truck with Melissa Bachman. For a start, she calls herself a “huntress”, which unless you are living in Ancient Rome is about as silly as me calling myself a “writress”, or Christine Lagarde calling herself the “Directress” of the IMF. From that alone, I’m pretty sure we’re not going to get along.

Then there’s the fact that she trots around the globe killing animals like it’s going out of fashion, which fortunately it very much is. Bachman sounds like a cross between Cruella de Vil and Sarah Palin, and the pleasure she appears to take in the senseless deaths of animals is distinctly nauseating.

But I have nonetheless been utterly unnerved by the responses to Bachman doing the rounds on social media over the last few days. Selected at random from literally hundreds more on Twitter:

“Someone needs to capture her and break every bone in her body.”

“I want to punch this bitch’s teeth out.”

“If I come across her I’ll rip off her fucking face.”

“I would happily blow her head off.”

“I hope she gets breast cancer and dies in pain.”

“I hope that c*nt gets vaginal herpes and dies.”

There have been calls for her phone number and address to be posted online, together with the address of her parents. The insults directed at Bachman are noticeably and predominantly gendered and sexualised: bitch, skank, c*nt, whore.

An “Open Letter to Melissa Bachman”, posted on a local blog, has been enthusiastically received and circulated online. It begins by explaining that although the letter does not intend to discriminate against all women, it must be acknowledged that Melissa Bachman is a “gross whore”, who “regresses the gender exponentially”.

You hear that, ladies? We thought we were doing okay. But apparently the actions of one woman have now set us all back. Exponentially. We’ll just have to hope that with concerted hard work we can claw our way back up the ladder of male opinion, but in the meantime it’s probably best just to hand back your vote.

Seriously, what is this bullshit? When GoDaddy CEO Bob Parsons released a video in 2011 of him killing a Zimbabwean elephant, there was also an outpouring of online concern. But I don’t recall a single person suggesting that thanks to Parsons, all the dudes in the whole world had just taken a giant collective step backwards. Neither do I remember anyone suggesting that Parsons’ predilection for elephant killing inevitably implied sexual promiscuity on his part.

(While reading about how Melissa Bachman has consigned every woman on earth to the naughty-box, I was reminded of the response last week to singer Lily Allen’s latest music video. That’s a subject for another day, but one blogger wrote of the ensuing controversy around Allen: “It’s oppressive to have to represent a whole sex in everything you do”. Quite.)

The “Open Letter” to Bachman proceeds to express the hope that she contracted HIV in South Africa before she returns home to recommence sexual conduct with her cousin. The author also sketches out his fantasy punishment for Bachman: “I’d shoot you right in the neck and mount your disgusting botoxed face on my wall. Wait. No. The last thing I’d actually need is your silicone-infested head dripping toxins into my fireplace. I’d turf the body.” He concludes by inviting her to visit Cape Town in order to be stabbed.

Can we just, momentarily, get a grip here? As repulsive as you may find canned lion hunting, Bachman has done nothing illegal. Let me repeat that: Canned lion hunting is not illegal in South Africa. Bachman practically came here with a gilt-edged invitation from our government. The tenor of the responses to her deed make it sound as if she crept across our border under cover of nightfall and hacksawed her way into the Kruger Park to embark on a Simba killing spree. A petition demanding that the government of the Republic of South Africa deny future entry to Bachman has been signed more than 40,000 times in the last few days.

This is, frankly, absurd. Firstly, I see no reason why Bachman would ever desire to set foot on our shores again: if she’s still online and hasn’t thrown all her internet-enabled devices into the sea, she’ll be under the justified impression that half of South Africa will be waiting at the airport to inflict unspeakable violence upon her.

Secondly, Melissa Bachman does not make or implement the laws in this country. If you want to see canned hunting done away with, then lobby your local MP, Tourism Minister Marthinus van Schalkwyk, and Environmental Affairs Minister Edna Molewa. You might also want to join calls to demand that the US bans the import of lion trophies.

Demonising Melissa Bachman further will achieve literally nothing. Neither will it bring that lion back to life. DM