Review: Aladdin should have wished for a better plot

Review: Aladdin should have wished for a better plot 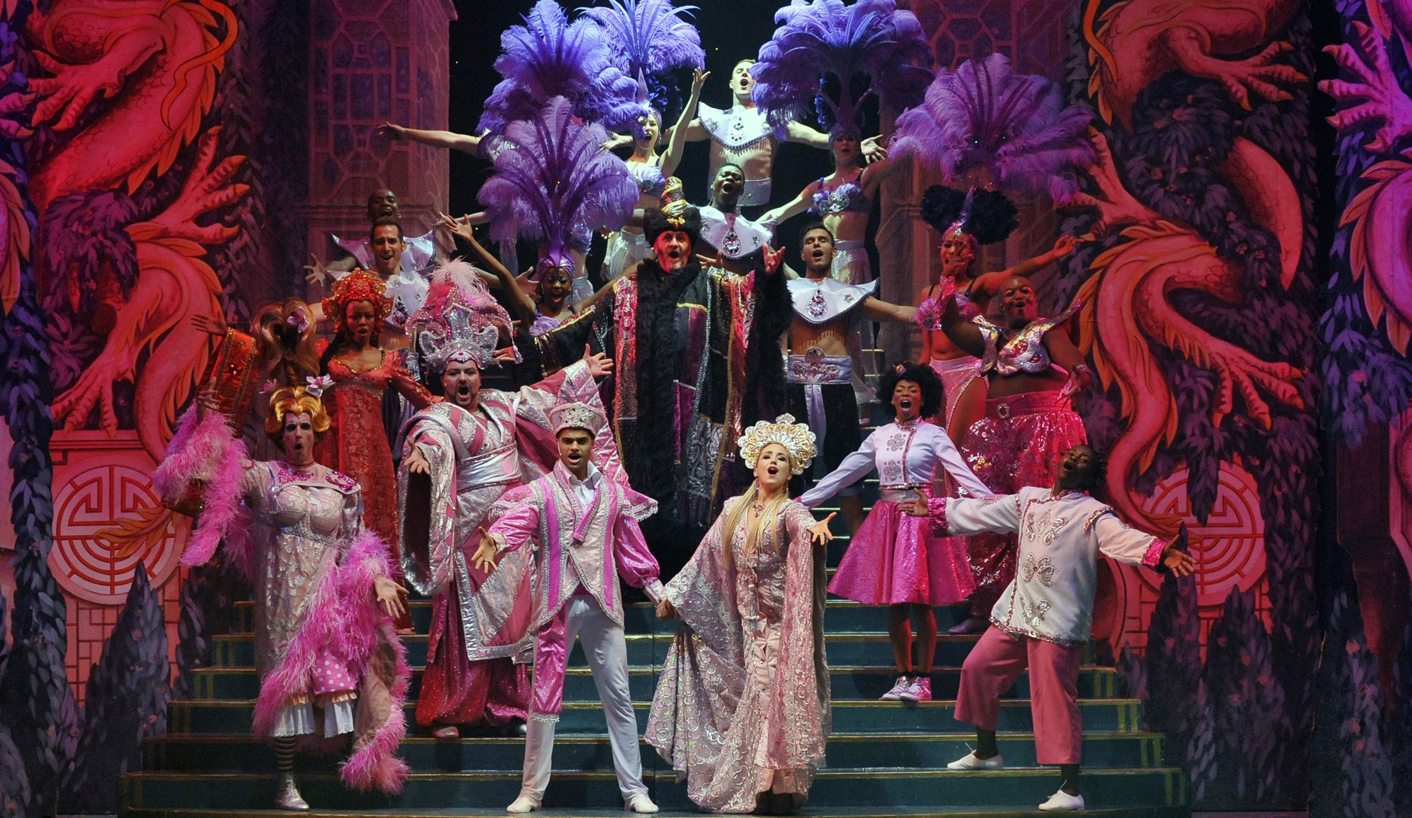 Janice Honeyman is back with another pantomime, this time in the form of Aladdin. As a visual treat it’s fabulous, but the acres of glamorous material struggle to disguise the threadbare plot. By LESLEY STONES.

Sumptuous doesn’t even begin to describe it.

The annual Joburg pantomime looks like an explosion in a jewelry factory, with every surface glittering and a supporting cast of itsy bitsy costumes and ostentatious feathers that could give the Moulin Rouge an outbreak of plumage envy.

There’s bling on wheels too, with a stretch limo pulling up in front of a stunning series of changing sets. It all creates a splendid fantasy world where cheerful dancing people fend off a slight threat of evil and all live happily ever after.

If it sounds familiar, it is, because writer and director Janice Honeyman has been staging these year-end extravaganzas for ages. But the same-iness is beginning to show.

The best thing to say about the plot is that there is one, then move on swiftly. Yet what makes pantomimes such an enduring success isn’t just the flash and the bang, the glitter and the special affects, which Aladdin has in heaps. The art lies in crafting a script that works on two levels, giving the kids lots of slapstick laughs and thrills while an undercurrent delivers innuendos and topical jokes for the adults, above the oblivious ears of the giggling nippers.

Aladdin falls short there, and no amount of rubbing the magic lamp will bring a shine to the lacklustre story.

At times it feels like everything is just going through the motions to tick off the requisite set pieces – a sing-along, some boos and hisses, and lots of songs with little coherency to hold it all together.

There are a few topical jokes and a nice skit on the Guptas, but often the gags rely on racial stereotypes rather than wit.

Familiar faces are missing this year and fresh blood has arrived, chiefly in the form of radio personality Jeremy Mansfield as the villain and Darron Araujo as the dame.

Mansfield was a disappointment, being nowhere near as evil as he ought to be. He walks rather than struts, talks rather than sneers. Maybe that’s a fresh style of playing a villain, but it’s bit too laid back to fill the role rewardingly.

Perhaps the cast should have been swapped, because Araujo is a little grating as the dame but throws his heart into it and maybe needs a meatier part to grab.

Timothy Moloi whoops it up well as the Genie, giving us some velvety black magic in his song and dance routines. Actor and model Christopher Jaftha makes a gorgeous Aladdin, but his toned body is more mesmerising than the words he’s delivering.

Bongi Mthombeni is lovely as Wishee Washee, Aladdin’s brother, and really packs in some personality. He’s the lonely one who everyone teases, and just about the only character who generates much emotional connection with the audience.

The singing and choreography is bright and breezy, and by the end the cast and the stunning spectacle manages to whip up appreciation from the audience.

As a visual treat it’s fabulous, but the acres of glamorous material struggle to disguise the threadbare plot.