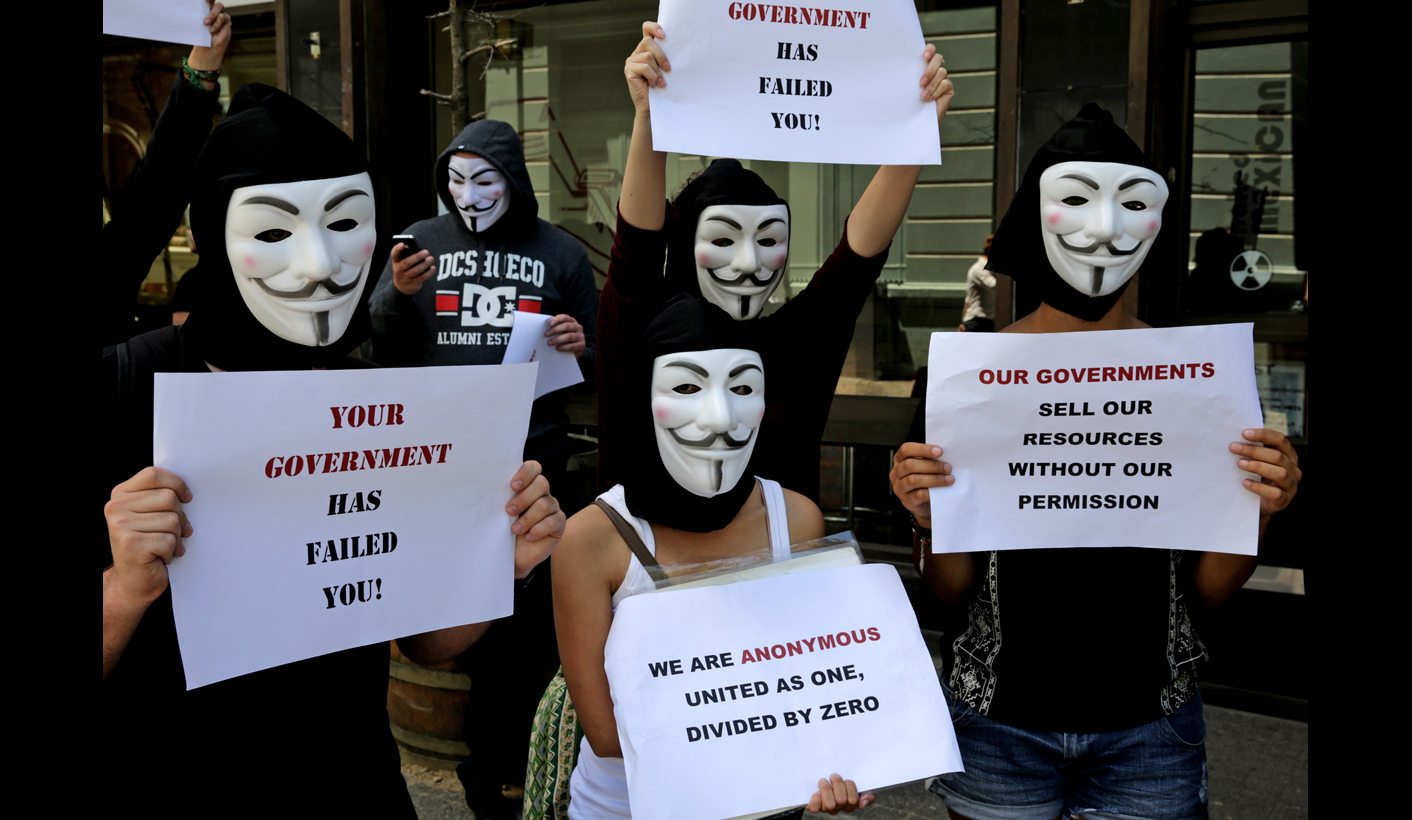 What do footballer Lucas Radebe, activist Rhoda Kadalie, ‘Paleo diet’-advocate Tim Noakes and Business Day editor Peter Bruce – to name a few – have to teach the South African public about ethics? This was the intriguing premise of a new ethics conference held in Cape Town on Tuesday: EthicsXchange. REBECCA DAVIS couldn’t resist being there.

It was perhaps fitting that Cape Town’s inaugural ethics conference was held on the same day that people around the globe participated in the ‘Million Mask March’, donning the Guy Fawkes masks popularised by the film V for Vendetta, and now associated with hacker group Anonymous, to protest – albeit in a vague sort of way – against corruption and the current status quo.

In Cape Town, an estimated 40 or so people apparently turned out for the march, with one protestor telling EWN: “We are protesting things such as the Secrecy Bill”. Photos of the Cape Town participants showed them holding posters with slogans like “Our governments sell our resources without our permission”, and “Without evolution there will be a revolution”.

The discussion on offer at EthicsXchange was at certain points about as specific as this as well – but then again, “ethics” is a pretty vast and tricky topic to cover over the course of 11 punchy short talks. The event was organised by Futuregrowth, an asset management company, in collaboration with the Asisa Academy, a training facility for asset managers. The organisers said in advance that they hoped the event would “involve South Africans in a national discourse on ethics”, and “inspire a different way of thinking when it comes to making ethical decisions”.

That sounds like a tall order in a country where we sometimes seem confronted by ethical blindness in every direction. It’s hard to know who the obvious picks would be to address a South African ethics conference, particularly if you didn’t want to include religious figures. Perhaps a moral philosopher; perhaps a prominent whistle-blower from either the public or private sector; perhaps a respected former jurist. Whoever you might have in mind, it’s probable that they didn’t feature on the EthicsXchange speaker programme.

In some regards this was to the organisers’ credit: they brought together a group of speakers from a wide range of sectors – business, science, academia, activism, sport, media – and the contributions were invariably pretty interesting, even if the ultimate effect was perhaps slightly more like a TED event than an ethics conference.

The importance of individual ethical choices, however insignificant these might seem at the time, was something of a running theme. The World Wildlife Fund’s Morne du Plessis, discussing the ethics of personal choices that impact specifically on the environment and climate change, employed the metaphor of individual actions as “droplets that team up to form raging torrents”. Louise van der Merwe, from a group called Compassion in World Farming, spoke similarly of the snowball effect that can result from individual consumers choosing differently when it comes to farmed meat.

Van der Merwe gave a talk which relied largely for its impact on brutal images of animals being farmed in horrific battery conditions. It’s definitely instructive to be reminded of the suffering that often occurs before a piece of meat ends up on our plate – particularly because the current chain is so sanitised that it’s easy to give this little thought – but it did leave one hoping that there are free-range facilities in South Africa which are a little less extreme than the battery farms Van der Merwe focused on. As always, it’s the poor who get the worst of it: the average budget pack of chicken feet, for instance, is “teeming with bacteria”, Van der Merwe said.

“I’m not about to ask you all to learn to love lentils,” Van der Merwe said; which to my mind begged the question: Why not, if conditions for farmed animals are as universally bad as she suggested? Van der Merwe did say, however, that one meat that you can generally rely on as being farmed humanely is ostrich. “In brutalising animals, we brutalise ourselves,” she warned.

Food choices were focused on in two further talks, which was possibly overkill given the range of potential ethical dilemmas facing South Africans on a daily basis, albeit that each speaker took a distinctly different tack. Science author and writer Leonie Joubert took on a wider structural issue, to do with the abundance of sugar-loaded, highly processed food made available cheaply in urban areas. Such food often causes people to put on weight but remain malnourished, which is particularly problematic when it comes to babies who require decent nutrition for the critical first 1,000 days of their life to ensure proper brain development.

Joubert’s proposal is that sugar should be treated similarly to tobacco, as both toxic and addictive, and should be regulated far more strongly. She also calls for legislation to be implemented on the topic, and research to be carried out, which is free from the influence of the powerful food lobby. In addition, Joubert proposes a “polluter pays” approach, similar to the treatment of oil companies and the like, which takes into account the hidden health costs on the state of highly processed food.

Professor Tim Noakes also calls for a different way of thinking about food, which involves shunning what he referred to in his talk as the “groupthink” which has characterised the consensus around the desirability of a high-carbohydrate diet. For some years, since developing diabetes himself and exploring different eating plans, Noakes has been advocating a low carbohydrate, high fat diet. The choice of Noakes as a speaker for this particular forum was an interesting one, given that the professor has recently attracted controversy for an article in the South African Medical Journal extolling the health benefits of cutting out carbohydrates based largely on anecdotal testimony.

One of his biggest critics has been UCT academic Jacques Rousseau (a former Daily Maverick columnist) – who lectures, incidentally, in ethics. Rousseau recently accused Noakes of encouraging “incompetent and pseudoscientific thinking” and abrogating his “responsibility as a scientist and an educator”. Against this background – and considering that Rousseau was actually in the audience at EthicsXchange – perhaps a more fruitful discussion for the conference would have been an on-stage debate between the two men on the particular issue of scientific ethics and research publication.

Taking a more specific look at the question of ethics was another academic, UCT’s Vice Chancellor Max Price, who broached the interesting question of whether ethical behaviour can actually be taught in any meaningful way, particularly by universities. It’s an especially timely notion given that a UK standards watchdog called on Tuesday for British MPs to be given “ethics training” to avoid abusing their positions – an idea that many might find appealing in a South African political context as well.

Price pointed out that whereas some forms of behaviour are widely known to be unethical – such as bribing a potential client to receive their business – there are other contexts which are far more blurry, such as offering potential clients tickets to a rugby match. He also noted that merely knowing what the appropriate ethical behaviour is doesn’t always predict whether ethical behaviour will be followed through. Our moral psychology is also driven by our emotional responses (for instance, if we find something disgusting) and also by the behaviour of our peers – if students’ friends are all cheating in exams, they may be more likely to cheat too.

Price said that there is contrasting research on whether ethics training actually works in the business world. Universities, he suggested, have more of an opportunity to make an impact. Among other factors, universities can foster the sense that deep critical thinking about issues matters; that reflection matters; and that there are vital moral lessons to be learnt from literature and history.

In the business world, though, how do you actually deal with unethical employees? This was the question tackled by clinical psychologist Dr Giada del Fabbro, who pointed out that there’s a personality difference between what she termed “situational fraudsters” and a second group who might engage in criminal behaviour regardless of context. Most of the first type commit workplace fraud because they are in debt, either because they live beyond their means or because they have some form of addiction problem. Such individuals can be worked with, via debt counselling or addiction help, and rehabilitated. For the latter class, she warned, no such rehabilitation might be possible. Might the same taxonomy apply to politicians?

Moving from the context of unethical behaviour in the workplace to the political sphere, activist Rhoda Kadalie railed against stealing politicians who go unpunished while “poor people who shoplift go to jail”. There are too few incentives to protect truly ethical behaviour, she suggested: whistleblowers are often treated badly and “goodie two-shoes” end up unpopular. But “the highest form of patriotism is to be critical”, Kadalie maintained. She went so far as to call for a “Moral Truth Commission” for South Africa, without going into detail as to what this might entail. Kadalie pulled no punches: “Zuma and Mbeki started a moral regeneration campaign but it failed because moral regeneration cannot be led by moral degenerates,” she announced.

The idea of a public ethics discussion seems like a valuable one, and it would be good to see the project developed. In future incarnations, it might be useful to stage discussions of more direct ethical issues which face many South Africans daily: the ethics of turning down the request of a beggar, for instance, or the ethics of not paying e-tolls. To live a consistently ethical life in South Africa sometimes seems like a terribly weighty task: as such, the conference organisers need not fear running out of material any time soon. DM

Photo: Activists participate in the Million Mask March in Cape Town, Tuesday, 5 November 2013 to demonstrate against issues such as government corruption and fracking in the Karoo. Picture: Nardus Engelbrecht/SAPA