Justice, of a sort, for Anene 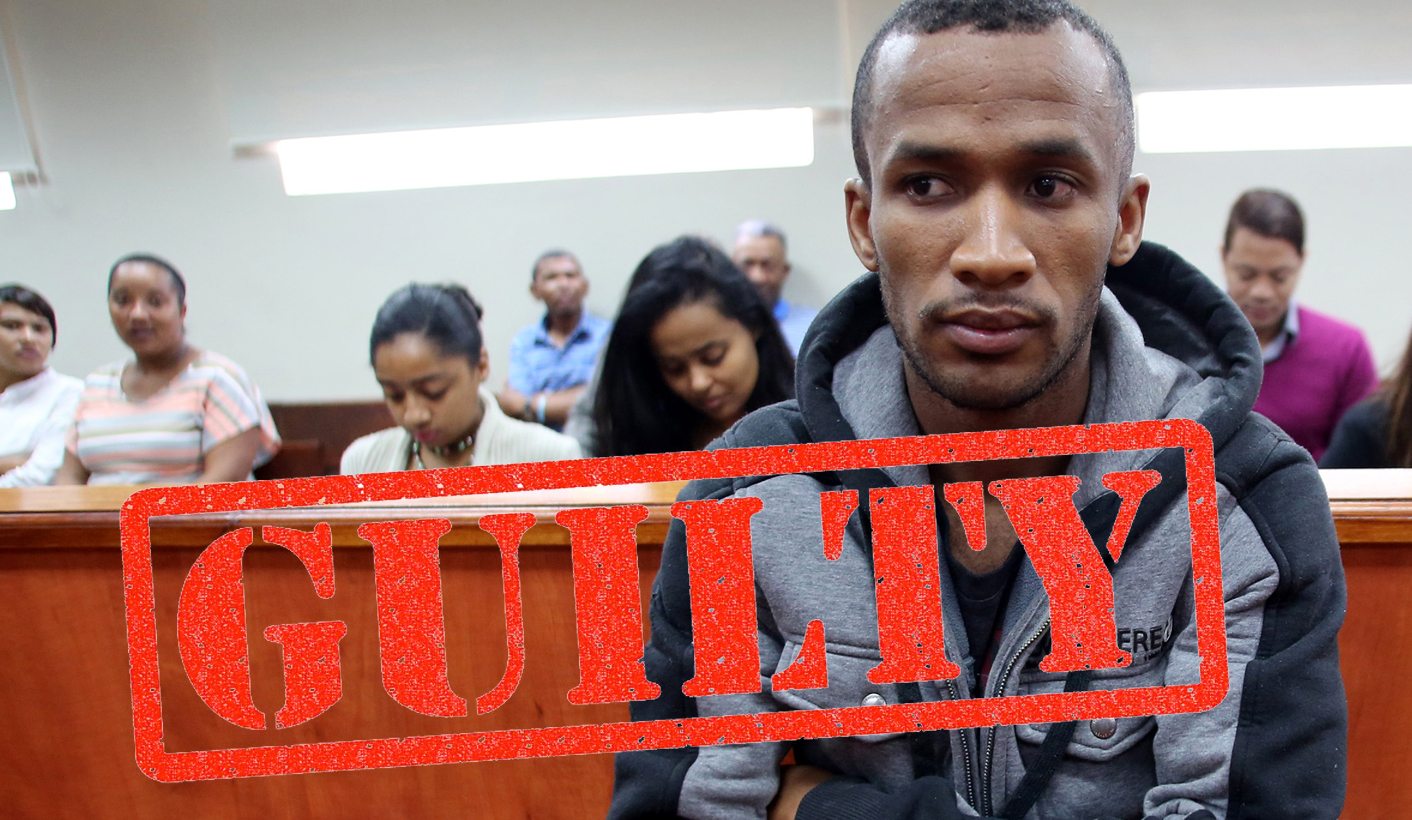 Anene Booysen would have been 18 years old today. Instead of celebrating her birthday, Booysen’s family and friends will hear what sentence the man ruled responsible for her gruesome rape and murder will receive. On Tuesday, Johannes Kana (21) was found guilty on both counts in the Swellendam Circuit Court. The verdict will be a relief for those who feared that yet another instance of procedural bungling by police may have allowed him to escape the murder charge. But questions remain over whether it was really Kana alone who took Anene Booysen’s life. By REBECCA DAVIS.

Little has been reported about what Johannes Kana, the man found guilty of one of South Africa’s most heinous recent sexual crimes, is really like. He had known Anene Booysen for about eight months before the crime took place, on 2 February 2013. The two were both school drop-outs, like an estimated 60 to 70% of Bredasdorp youth. Kana worked as a fireman for some time.

A Bredasdorp police officer told the court, based on early questioning, that Kana loved rugby. His family dynamics were reportedly difficult: the same police officer testified that Kana said he had no relationship with his father, and viewed his grandfather as a father figure. Kana also allegedly said he harboured resentment towards his mother, Lena Rickers, though she seems to have been a consistent presence in the courtroom.

At least two of Kana’s friends initially endeavoured to protect him, and then changed their testimony. Witness Chrisna Mentoor initially claimed that Kana had spent the night of Booysen’s murder with her. When later asked why she lied, the Cape Argus reported that she replied: “He is a person who protects women, he doesn’t allow men to hit women.”

Kana did not testify at his trial: something which Judge Patricia Goliath said may have worked against him, since he gave the court no explanation as to how it might have been possible for someone else to have committed the crime. It was reported at various times that Kana appeared relaxed and unemotional in the courtroom. When doctors and pathologists were testifying as to the extent of Booysen’s injuries, Judge Goliath reportedly had to ask Kana to pay more attention, as an interpreter said that he was clearly not listening. When judgment was about to be delivered on Tuesday, journalists in court reported that Kana was smiling and joking with his family.

Through the testimony of witnesses, the court was able to build up a picture of what happened on the night when Booysen died. Her foster mother, Corla Olivier, 41 – who, like her daughter, worked as a cleaner – told the court that she had given Booysen permission to go to the pub that night if she returned home by 10pm. Olivier said that she was surprised when Booysen had requested to go to the pub that night, as it wasn’t her normal style – Booysen preferred to stay home and watch TV. Witnesses said that Booysen had been in a happy, giggly mood.

Davids Sports Pub and Bar, a favourite local watering-hole, was reportedly packed that evening. Booysen went there with her friends Bernice Arendse and Engela Moos. They were all 17 at the time. The Western Cape Liquor Authority later criticised the pub’s owner for allowing minors on to the premises, but a witness said that Booysen had likely snuck past bouncers after being initially denied entry.

The three young women drank and danced. Johannes Kana and his friends arrived at around 1am, after allegedly drinking beer, Amarula, and smoking a hookah pipe. Booysen’s foster mother arrived at the pub at around 3am to try to persuade her daughter to return home. The two had an argument, whereupon Olivier left. The man who accompanied Olivier to the pub, Elryno Jameson, testified that both he and Olivier were very drunk.

Chrisna Mentoor, after she had changed her story, testified that she had seen Kana and Booysen leaving the pub together, but Kana’s lawyers attempted to cast doubt on her testimony through strenuous cross-examination in which it reportedly appeared that Mentoor was not sure which direction the pair had taken when they left the pub.

Another friend of Kana’s, Riaan Scheepers, gave the same testimony and was similarly grilled for allegedly initially trying to protect Kana and subsequently changing his statement. Scheepers also testified that Kana had confessed the crime to him.

On 10 October, Kana made his confession. He testified that he had indeed left the pub with Booysen. He said that when he tried to kiss her, Anene pushed him away. Then Kana said he kicked her, pulled down her pants and raped her – but, he says, did not kill her. After the rape he claimed he ran away and left her.

When paramedics arrived to help Booysen the next morning, they testified that she was in so much pain that she could not bear to be touched. Police constable Ricardo Merts testified that when he found Booysen the beating she had sustained to her face had caused her eyes to be swollen shut, and that her legs were bent under her body. The details of her injuries are unimaginably gruesome. Doctors reported that the disemboweling of Booysen left over a metre of her small intestines protruding from her vagina. An object had also reportedly been used to mutilate Booysen’s genitals.

There’s a strange aside, here. In late May, a meeting was held between SAPS and the Bredasdorp community, reported on by West Cape News. At that meeting, SAPS Hermanus Cluster Commander Phumzile Cetyana reportedly told the community that media reports of Booysen’s injuries were exaggerated. Cetyana said that the sole external injury Booysen sustained was a tear to her perineum.

This seems, simply, to have been untrue. A succession of doctors and pathologists testified in court to the horrific extent of Booysen’s injuries. Tygerberg Hospital doctor Elizabeth de Kok told the court that Booysen’s injuries were the worst she had ever seen. Another doctor, Liezel Taylor, reportedly testified that when she walked into ICU, “there was a smell like something had died”. It seems that Booysen’s death was agonising.

Booysen’s foster mother repeated her claim in court that when Booysen was asked, before she died, who carried out the attack, she replied: “Zwai and his friends”. Olivier said that Booysen never mentioned the name of Johannes Kana.

‘Zwai’ was the nickname of Booysen’s childhood friend Jonathan Davids, who was initially arrested and then released in May, with the NPA saying that they did not have enough evidence to tie him to the crime. The New York Times tracked down Davids just after his surprise release and found him “glassy-eyed and reeking of alcohol in the middle of a recent afternoon”, smoking marijuana and “fuming about the case”. He described Booysen as being “like a sister”, and said that the four months he had spent in jail had left him with a pain “so deep I can’t go any further”.

After Kana made his confession of rape during the court case in October, his relative Pieter Kana told journalists: “We feel hurt that he has to stand alone [for rape and murder] when there were others arrested and released… Also, what about Anene saying that it was Zwai [when she was] on her deathbed? We think [Kana] made a statement about something he didn’t do.”

The issue of whether Kana really acted alone is one likely to hang troublingly over the case even after his sentencing. In addition to Booysen’s deathbed testimony that there were multiple attackers, it was claimed in court that Kana weighed just 49kg, begging the question of whether he was capable of inflicting her gruesome injuries alone. When Dr De Kok was asked by Kana’s lawyer whether someone of his client’s size could have committed the crime alone, she reportedly answered in the affirmative, though she said that she couldn’t tell if the injuries had been inflicted by more than one person.

Another problematic aspect of the case’s investigation involved procedural mishandling by the police of a type we have become all too accustomed to. In February, Kana allegedly pointed out the location of the crime to police without having his rights explicitly read to him. The court was subsequently forced to rule evidence arising from this as inadmissible, as a result. Fortunately Judge Goliath deemed other evidence against Kana to be strong enough to warrant a conviction, but the problem yet again raises the issue of training for police investigators.

Johannes Kana will go to jail, likely for a long time. But one of the truest forms of justice for Anene Booysen would be a national undertaking to prevent the horror inflicted upon her happening to anyone else. That is a closure which, despite the outpourings of anger since Booysen’s rape and death, appears to remain tragically distant. The Witness reported last week that a total of 106 girls under the age of 12 were raped in the uMgungundlovu District Municipality in KwaZulu Natal within just three months this year. Cry, scream, the beloved country, once more. DM