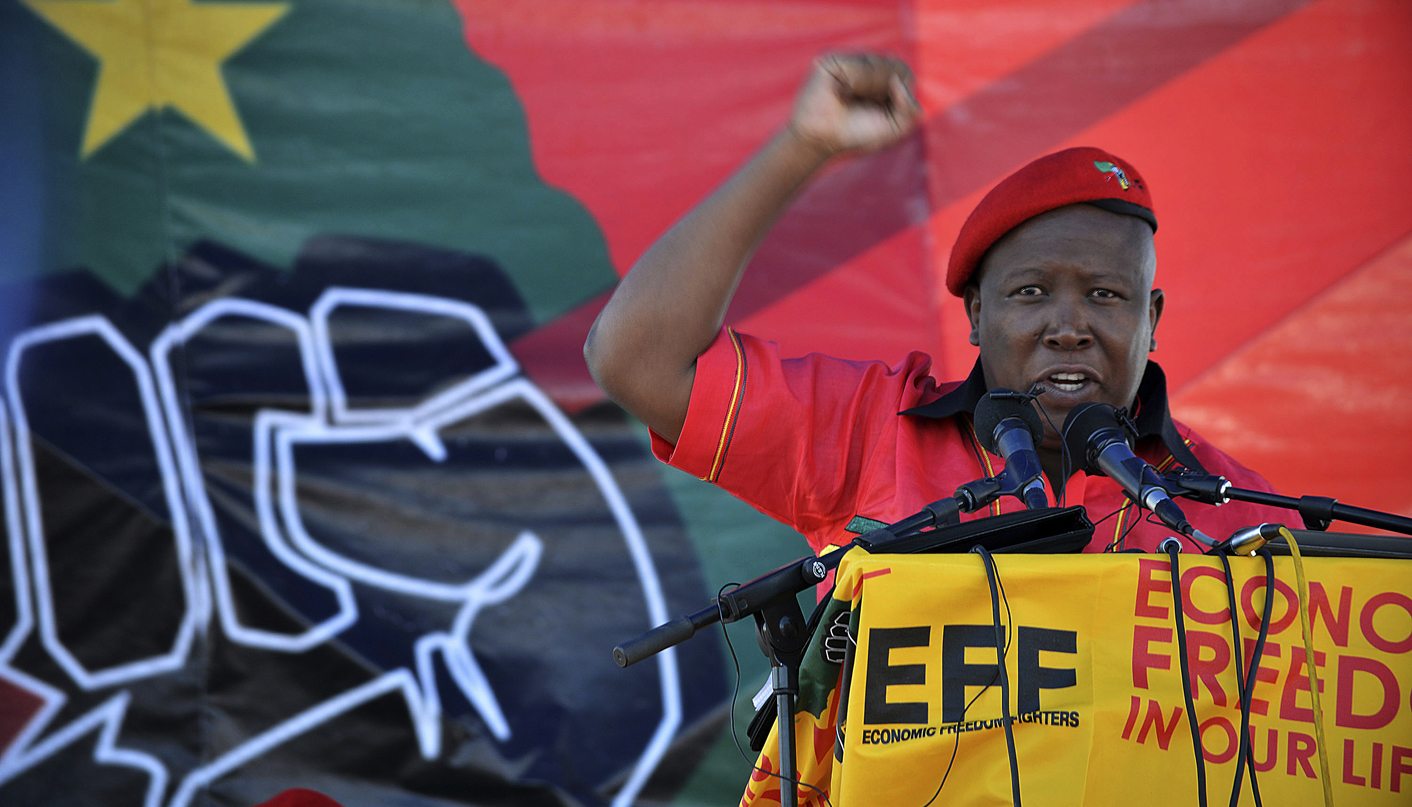 The past few days have seen activity on opposite ends of the political spectrum, agitating and enticing diverse constituencies disgruntled with the ANC government. The Red October marches last week played up fears about supposed targeted crime against white Afrikaners. The launch of the Economic Freedom Fighters on Sunday at Marikana, the site of a bloody massacre carried out by the police, ensconced the red berets as a radical left-wing party fighting against what Julius Malema says is an unjust, corrupt and murderous state. It would seem that playing on people’s fears and anger is as much a campaign tool in SA politics as free t-shirts and sloganeering. By RANJENI MUNUSAMY.

It says something about the state of South African politics that Julius Malema and Steve Hofmeyr are the faces at opposite ends of the political spectrum. Both are charismatic personalities whom people either love or revile. Their politics are based primarily on race and firing up their constituencies to believe they are under attack.

Malema, who once proclaimed that his blood is black, green and gold, has now come to represent the fiercest voice against the ANC and President Jacob Zuma’s administration. The launch of his party, the Economic Freedom Fighters (EFF) followed his expulsion from the ANC and being charged with corruption in connection with government tenders in Limpopo.

He has styled himself as a champion of the poor, advocating radical economic policies such as nationalisation and land seizures without compensation to address high levels of unemployment, poverty and inequalities in society. From his time as ANC Youth League president, Malema has been able to stir up fear and emotions, yank the chains of the middle class and rebel against authority. As leader of the EFF, Malema is completely unrestrained and has now set himself up as the voice of those frustrated, disappointed and whose patience with the ANC has run out.

The launch of his party at Marikana was a masterstroke. Marikana has come to represent the site of the ANC government’s biggest failure of a major constituency, the mineworkers who turned the wheels of the South African economy for generations. The wildcat strike at the Lonmin platinum mine in August 2012 and its aftermath, when police fired live ammunition at striking workers, has come to represent one of post-democracy South Africa’s greatest shames.

The mass killing of civilians by the state, some of which was captured in shocking media footage, thrust South Africa into the international spotlight, and the sham into which the commission of inquiry investigating the matter has been turned has provided little explanation or healing. If anything, the state’s handling of the inquiry has shown utter disrespect for the victims and their families.

Malema was one of the first political leaders at the scene after the Marikana massacre and was quickly able to translate the shock and disbelief of the killings into hatred for the ANC and the government. The ANC did not exactly reach out to the people of Marikana and surrendered the area, adding insult to injury by not attending the first anniversary commemorations of the massacre. Marikana is now somewhat of a no-go zone for the ANC and its allied trade union, the National Union of Mineworkers.

The launch of the EFF next to the koppie where many of mineworkers were shot is therefore Malema sticking up his middle finger to the ANC, clearly signalling that he intends exploiting the rage and disenchantment with the ruling party in Marikana and elsewhere in the country. It initially looked as if the EFF would target primarily the youth, particularly those with no political home after the collapse of ANC Youth League structures.

But Malema’s address at the EFF launch revealed that he has cast his net wide, from people discouraged through unemployment to workers who cannot break the poverty barrier and professionals frustrated with being unable to rise in the workplace. Malema even extended his red berets to Gauteng motorists defying the e-tolls, people offended by the liberties and arrogance of the Gupta family, as well as black journalists whose stories get badly subbed and the meaning changed by agenda-driven white editors.

The EFF was a home for orphans. “This is the home for the hopeless,” Malema said, declaring that he was not interested in occupying opposition benches in Parliament but saw himself as leading a government in waiting. He did not mention how his pending trial and tax problems might affect his prospective presidency, though.

Mindful of where he was standing, Malema said there was no difference between “Apartheid murderers and Zuma murderers”. But he made a clever distinction between the police officers on the ground and those who give the orders, obviously calculating that the large number of officers disenchanted with bad management of the police were also his potential voters. He said police officers should take off their uniform when instructed to kill innocent people.

“Give them their uniforms and weapons. Tell them you do not want a salary with blood on it,” Malema said.

His populist positions on land and nationalisation have now been supplemented by tapping into anger over crime. He wants a referendum on the death penalty, and according to City Press, says would advocate for hanging and castrating those who rape elderly women.

Most of Malema’s vitriol was directed at President Zuma, saying he apologised for giving South Africa “a mediocre non-thinker and non-reader”. He told the crowd to “refuse to vote for a singer and dancer”.

“We want a thinker to drive the policy of our country. We do not want an old man who dances like a teenager. Every time he dances older people look down with shame.”

Malema also vowed that should the EFF take power, they would “punish” Zuma’s friends, the Guptas for all their “wrongs”.

The EFF is, of course, not the only party trying to feed off disillusionment with the ANC. Mamphela Ramphele’s Agang, launched in February, is drumming up support based on highlighting corruption, poor leadership and delivery failures of the ANC government. But Ramphele appears to be appealing more to the highbrow in society, and competing in the same space as the Democratic Alliance (DA). The gaps between the DA, Agang and the Congress of the People (Cope) are in fact very narrow, and ideologically are manoeuvring in the political middle still dominated by the ANC.

With the SACP in virtual paralysis, and small parties in Parliament like the PAC and Azapo unable to grow further, there is very little contestation for the EFF in the left-wing space. Depending on whether Malema and his party can keep up the momentum and how much his legal troubles get in the way, the EFF has the potential to dominate left-wing politics. How this translates into votes also remains to be seen.

On the right, the only party still active in Parliament is the Freedom Front Plus. Right-wing parties have over time become inactive and leaderless through natural attrition and inability to sustain themselves. There are still pockets of discontent in white Afrikaner communities over crime and affirmative action.

Enter Sunette Bridges, an Afrikaans singer, who organised the Red October campaign to protest “white genocide” in South Africa. The flag bearer for this movement is former G-grade actor, singer and SA Idols judge Hofmeyr, a better known celebrity than Bridges in the Afrikaner community. Over the years, Hofmeyr has developed into a pseudo-political figure, going as far as meeting with Zuma over farm killings other fears in his community.

The Red October marches across the country were to protest the supposed “slaughter of white people” in South Africa. Their website declares: “No longer will we be silent about the oppression of White South Africans! No longer will we endure the killing of our people on our farms and in our towns and cities!”

At the march in Pretoria led by Hofmeyr, the Vierkleur flag of the old Transvaal and old South African flag were on display, clearly signalling the group’s nostalgia for Apartheid South Africa. The irony of branding the campaign Red October, used by communist parties who hold a month of activism after the 1917 October Revolution in Russia, obviously escaped the group – who released red balloons in tribute to those who perished in the “white genocide”. The SACP, which normally holds its own Red October campaign, either did not notice the hijacking of its term by the right-wing group or it is too disengaged to react.

It is not known whether this Red October movement will fizzle out or translate into a political voice ahead of the elections. Other than mass irritation on social media, the group does not appear to have made much of an impression. The next few months will show whether the targeted messaging has any resonance beyond the group of fundamentalists they have now attracted.

What is clear though is that the political landscape is becoming further polarised through disaffection. Discontent with the performance of the ANC is causing movement all over the political spectrum, but nothing drastic enough to challenge its dominance. There are now many more voices trying to catch the attention of the voting public than in the last election, and a lot more rhetoric in the air.

For now, red is en vogue. In a few months, it will have to stand next to the kaleidoscope of colours on the political spectrum. Only then we will know if the voters of South Africa are disaffected enough to trust their votes into the hands of radicals. DM

Photo: Julius Malema, president of the Economic Freedom Fighters (EFF), gestures as he addresses supporters during the official launch of his political party in Marikana. October 13, 2013. REUTERS/Mujahid Safodien