Abortion in South Africa: a conspiracy of silence 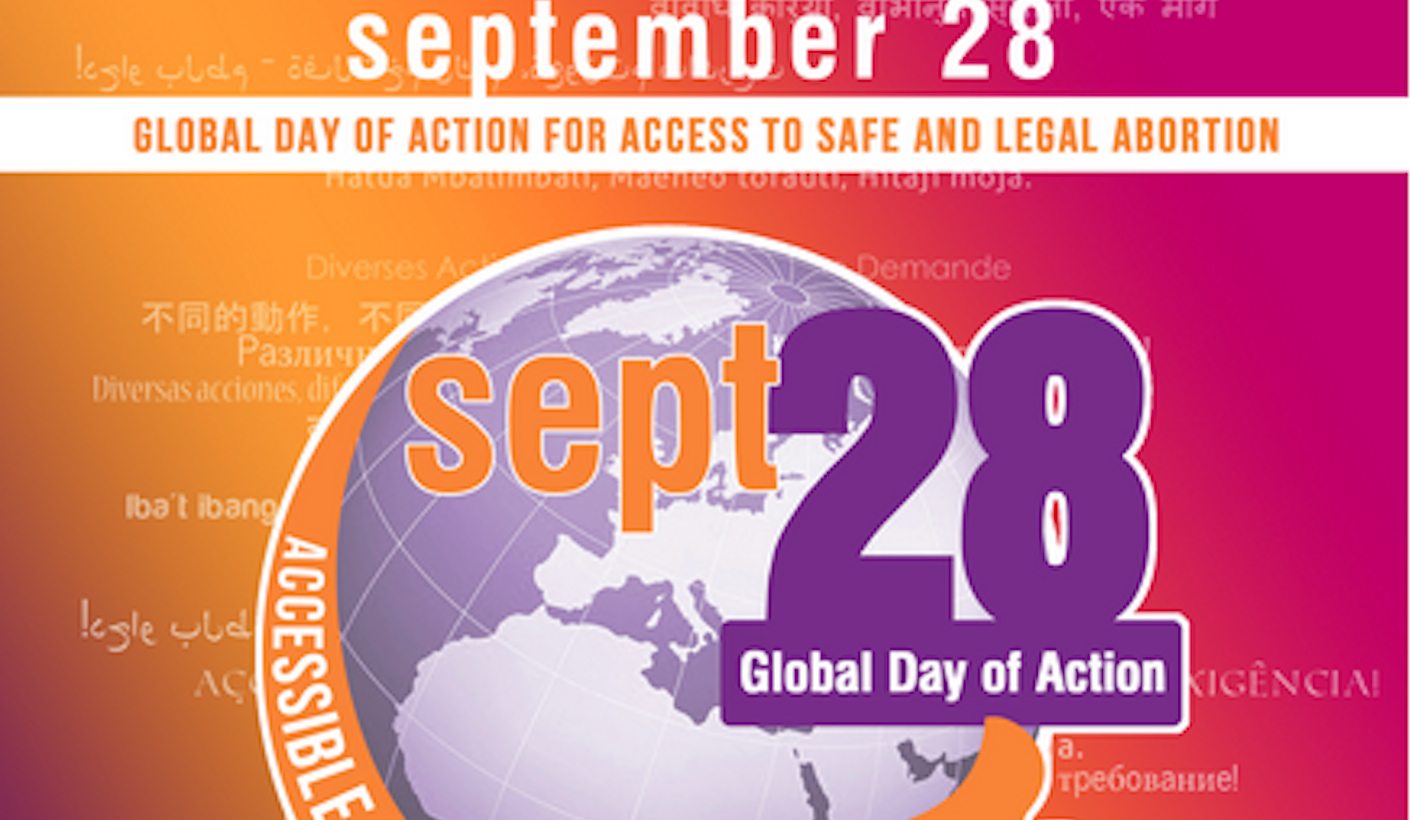 Saturday, September 28, was the Global Day of Action for Access to Safe and Legal Abortion. South Africa has one of the most liberal abortion laws in the world - on paper. Women’s health advocates are concerned, however, that less than half the abortion services supposed to be offered by government are operational. Meanwhile, various government officials have expressed worry at the number of abortions undertaken in South Africa annually. REBECCA DAVIS takes a look.

Marion Stevens, coordinator of WISH Associates (Women in Sexual and Reproductive Rights and Health), does not mince her words. “It is very concerning that this very fundamental feminist right does not seem to be on the agenda any more,” Stevens said. “In the over twenty years that I have been involved in women’s health, I have not seen this level of apathy, both on an individual and institutional level.”

Stevens, who is based in Cape Town, was talking to the Daily Maverick in the run-up to Saturday’s Global Day of Action for Access to Safe and Legal Abortion – a day which likely passed unnoticed by most South Africans. There’s a reason for this, Stevens says: people simply aren’t talking about abortion. It’s considered too controversial a topic. Politicians generally don’t want to touch it.

“There’s a conspiracy of silence that surrounds it,” agrees Dr Rebecca Hodes*, a medical historian at UCT who is carrying out research into South Africa’s past and present relationship with abortion. In 1974, she explains, South Africa passed the Abortion and Sterilisations Act. At a time when most Western nations were liberalising their abortion laws, South Africa’s act provided for abortion only under the most exceptional of circumstances. A woman could qualify for an abortion, for instance, if two state psychiatrists would testify that she was suicidal.

“That didn’t mean that women didn’t have abortions during Apartheid,” Hodes says. “They did, in their hundreds of thousands. But there was an abortion Apartheid in place, whereby affluent white women could get them from their private gynaecologists.”

Or they flew overseas: English-speaking South African women often took short “holidays” to the UK, while Afrikaans-speaking women visited Holland for the same purpose. Black women, who did not have the luxury of such options available to them, would visit “soap injectors”, where soap would be syringed into their uterus to initiate an abortion. They would then go to a public health facility. Medical Research Council (MRC) research suggests that in the final years of Apartheid, over 400 black women died during illegal abortions per year.

The year 1996’s Choice on Termination of Pregnancy Act marked the passing of one of the most progressive abortion laws in the world, entitling South African women of whatever age to a free abortion at a public facility.

“South Africa was really leading the space in the early 90s,” Stevens remembers. “There was a huge engagement with setting up support teams, and the nurses and doctors who provided abortions were well supported and well-regarded.”

But the liberality of South Africa’s law has not been matched in the long-term by the practical reality of women’s access to abortion. Four years ago, it was estimated that just 25% of designated abortion services in South Africa were available. Today, according to the NGO Ipas – which works to end preventable deaths and disabilities from unsafe abortion – there are less than 40%.

There’s also reason to believe that there is widespread public ignorance about abortion. A 2006 study found that at least 30% of South African women believed that abortion was still illegal. A higher percentage did not realise that there were time constraints on when one may legally seek an abortion (up until twenty weeks). Such confusion may have something to do with a dearth of clear public messages from government on the subject. In the government’s Confidential Maternal Mortality study, there is no separate category to count deaths from septic abortions.

“It’s like they’re putting a curtain over something,” Stevens says. “It’s deeply disturbing.”

In a space where women aren’t sure what they are entitled to, illegal abortion providers will inevitably flourish.

“I did some work last year for an international agency looking at young urban women,” Stevens says. “When we asked women about whether they had enough information about abortion, they said ‘Ja, we see it on every lamppost’.” Stevens was referring to the flyers which paper most big South African cities, offering cheap and simple abortions. There aren’t any firm figures on how many South African women seek illegal abortions each year, but it’s estimated that around 50% of all abortions carried out in the country are illegal.

Department of Health spokesperson, Joe Maila, told the Daily Maverick that the popularity of illegal abortion providers could be attributed to their misleading claims. “The promise of ‘safe, painless and quick abortion’ by the illegal abortionists is mainly responsible for most of the illegal abortions in the country,” Maila said.

But women’s health activists say it isn’t that simple. They say that the Department of Health could be doing more to crack down on such advertising, and more to provide the public with clear information about legal abortion. Then there’s the fact that women may seek out illegal abortions because the reception they receive at public facilities is chilly and moralistic. Abortion provider Marie Stopes’ reports from their clients suggest that young South African women seek abortions from illegal providers because “public sector nurses frequently chastise clients…for being sexually active, for being ‘irresponsible’, and for choosing to terminate the pregnancy rather than give birth”.

Maila expressed skepticism about this idea when the Daily Maverick put it to him. “I do not think that is entirely true,” he said. “But we are working very hard to deal with the issue of staff attitude. We believe that a change of attitude for the better will improve health care service delivery in our facilities.”

Yet a moralistic attitude towards abortion does not seem to be limited to some public sector medics. Leading figures within the government have also expressed disapproval. In July this year, Health Minister Aaron Motsoaledi was quoted as saying that young girls are “using abortion as contraception”. Women’s health activists are adamant that this claim is simply not supported by data.

“How do you explain a situation in which one person [undergoes] more than one abortion in a short space of time even though pregnancy is preventable?” Maila counters, though he did not provide any evidence of this. “It is this reality that makes us believe that there are people who use abortion as a form of contraceptive. This trend is worrisome as these people are equally vulnerable to HIV and AIDS and STIs.”

Department of Health figures show that between August 2012 and July 2013, 85,302 public sector abortions were performed in South Africa. (It should be noted that in 2011, the Health Systems Trust called the government’s abortion statistics “increasingly unreliable”.) Marie Stopes spokesperson, Palesa Khambi, meanwhile, told the Daily Maverick that Marie Stopes provided 43,500 abortions during 2012, and so far this year have provided 25,000.

Under the Zuma administration, a discourse of “moral regeneration” and “traditional values” has been cultivated which appears to sit uneasily alongside a frank discussion of the evident need among women for safe, legal abortion.

But perhaps it was ever thus. While Hodes’s research notes that abortion processes have taken place all over Africa for centuries, she says it’s also true that the ANC appears to have had an uneasy relationship with abortion since the dawn of democracy.

“There was never broad-based support for abortion within the ANC,” Hodes says. She points out that despite President Nelson Mandela’s explicitly-stated support for the Choice Bill, more than 80 MPs voted against it in October 1996, with over 50 MPs absenting themselves from Parliament on the day as a show of resistance. The DA fudged the issue by giving its MPs a free vote on abortion, the party explains on its website. “Ms Zille herself is a committed and church-going Christian,” the website states. “She believes that people should take responsibility before and not after they fall pregnant, and would not have an abortion herself.” However, on the basis of the number of deaths due to unsafe abortions, “Ms Zille believes that it is better to allow women the right to choose how to proceed, should they unintentionally fall pregnant”.

The political party most vocally opposed to abortion in South Africa is the African Christian Democratic Party (ACDP), which was the only party to vote against the adoption of the Constitution – on the grounds that it enshrined the right to abortion on demand. A number of private organisations also lobby hard against abortion, including the ‘Family Policy Institute’ of controversial pastor Errol Naidoo, who listed abortion on demand as one of the causes of Marikana.

But in various places throughout Africa, some of the people pushing hardest against abortion are not African, but American, or American-trained. Recently the Daily Maverick reported on the manner in which powerful, wealthy American evangelical groups are helping to fuel homophobia within Africa. These same groups are, if anything, even more concerned with abortion than with gay rights.

American groups like Heartbeat International have more than 120 pregnancy “service providers” spread within South Africa. One of their Western Cape affiliates is another American-led organisation called Baby Safe, which provides drop-off points (literally “baby safes”) throughout Cape Town where mothers can leave babies anonymously. “We staff the local hospital with a pre-abortion counselor for all women scheduled for weekly abortions,” Baby Safe’s website states. “We educate women; most women don’t know the consequences of abortion.”

But many women do know the consequences of giving birth to another mouth to feed in a situation of extreme poverty. “Women who seek abortions are frequently painted as feckless, in the public discourse, but many cite severe socio-economic deprivation,” Hodes says. “The decision is often the opposite of feckless – a gesture of responsibility.” DM

*Rebecca Hodes is an occasional contributor to the Daily Maverick