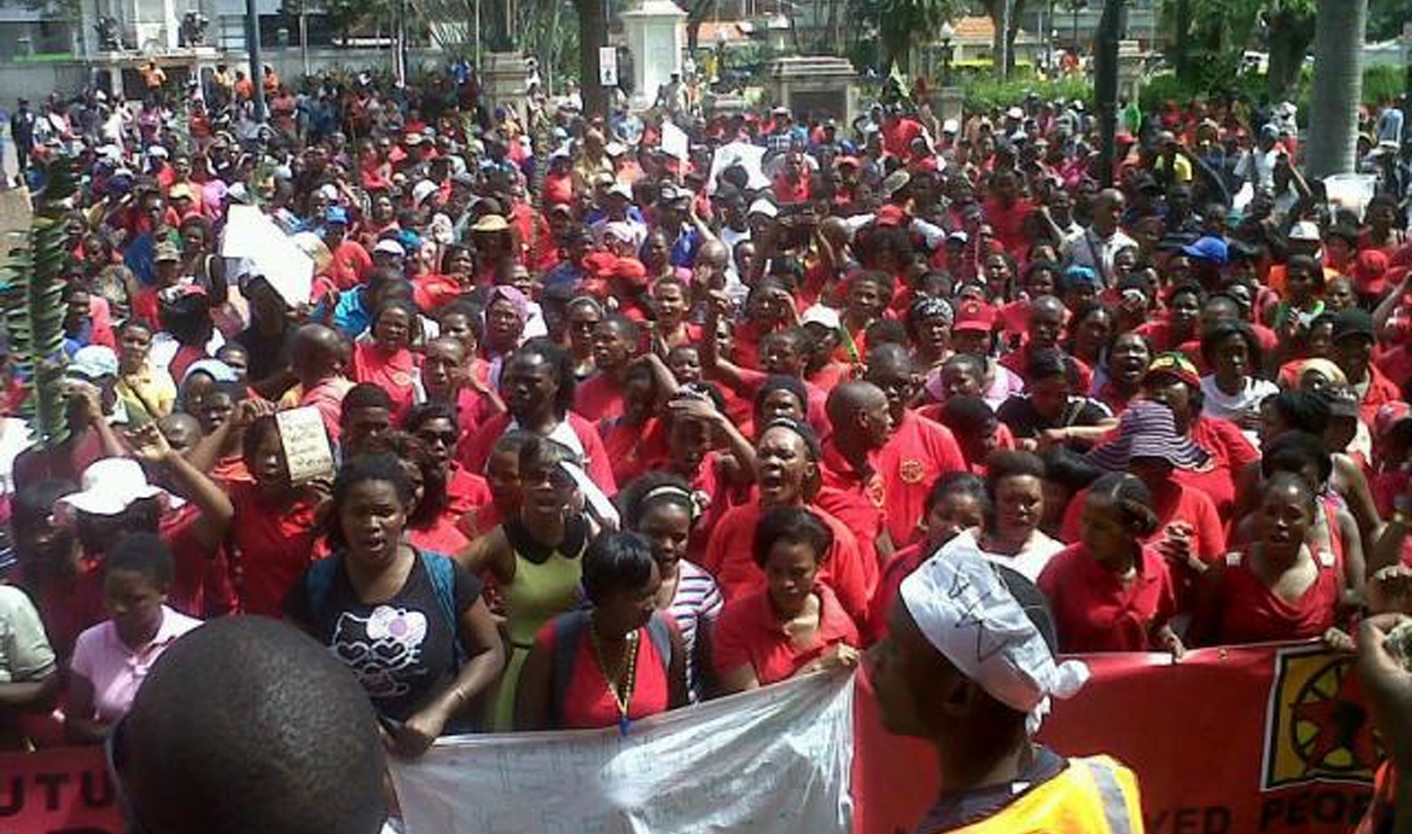 The shack dwellers’ movement Abahlali base Mjondolo is at the forefront of a new wave of mass political mobilisation. And the ANC in KwaZulu Natal, at least, has taken notice. By KHADIJA PATEL.

On Monday thousands of members of the shack dwellers’ movement Abahlali base Mjondolo marched to the Durban City Hall to “defend dignity and demand land and housing”. Simultaneously battling the eThekwini municipality on evictions and demolitions in court – and alleging persecution from the ANC in KwaZulu-Natal – the movement describes its current situation as a “very tough time”.

“[This march] comes at a time when we are not only beaten and repressed for raising our voices but also threatened with death and killed,” Abahlali said in a statement ahead of Monday’s demonstration. “Our crime has been to organise in shack settlements and to organise disorganised communities.”

And while Abahlali’s claim of persecution at the hands of the ANC is disputed, the movement is indeed at the forefront of a new wave of mass political mobilisation at the fringes of formal South African society.

After Abahlali members marched on Monday, some returned to the Durban High Court with the Socio-Economic Rights Institute to ask the courts to halt the current campaign of demolitions taking place in the Cato Crest informal settlement in Durban. The eThekwini municipality demolished homes in Cato Crest over the weekend, despite being interdicted by the court from carrying out any more evictions and demolitions in the settlement.

The court issued another interdict, its fifth in the last six weeks, against demolitions in Cato Crest on Monday. And on Tuesday the court will visit the settlement to identify and mark the homes of the applicants, in an effort to protect them from any further evictions or demolitions until the court hears an application to halt the eviction campaign entirely.

Ndabo Mzimela, the chairperson of the Abahlali branch in Cato Crest, says: “It all began on 13 August whereby they evicted about 30 shacks and then we got a court interdict after that demolition.

“On top of that interdict, demolition continued…” Mzimela says. “They were not showing any court order or any papers opposing the court order that we got.”

“An urgent interdict was granted by the court interdicting and restraining the municipality from evicting the named Cato Crest residents or demolishing their structures without a court order,” a statement from the Socio-Economic Rights Institute says.

The municipality was also ordered to construct “temporary habitable dwellings that afford shelter, privacy and amenities at least equivalent to those destroyed, and which are capable of being dismantled, at the site at which their previous informal housing structures were demolished to the residents whose shacks were demolished on 1 and 2 September”.

Thabo Mofokeng, a spokesperson for the eThekwini municipality, denies that shacks protected by the court order were targeted by the demolishers.

The municipality says the campaign in Cato Crest is driven by a zero tolerance approach to land invasions. Residents of Cato Crest are believed to have illegally occupied land and homes earlier this year.

Abahlali, however, stresses that many of the residents of Cato Crest were actually tenants in another settlement that was cleared for development.

“People were evicted from the original areas where they were tenants [for the purpose of development]. But they didn’t provide them with transit camps or anything that they used to do. So that’s when the people asked for the land but the councillor told them to go back where they came from,” Mzimela says.

While Mofokeng says the municipality is aware of some of the problems of the residents of Cato Crest, particularly those who were evicted previously without being provided alternate accommodation, he describes Cato Crest as a “prolonged battle”.

Abahlali members view the evictions as part of a politically motivated campaign to root out dissent against the ANC from the area.

“They are politically motivated,” argues Mnikelo Ndabankulu, a spokesperson for Abahlali. “You’ll find that when these demolitions take place the mayor of Durban and the chair of the Human Settlement and Infrastructure committee Nigel Gumede are within the area of illegal evictions. And the Red Ants pronounce that the order came from them. Because we ask them, ‘Where is the court order?’ They say, ‘No court order, but the orders came from above’.”

Abahlali has accused the local ANC councillor and city bosses of being behind the evictions, which it says started because the people involved were Xhosas, before it assumed political motivations. They allege the evictions were discussed by the executive of the local ANC branch before they were carried out.

Significantly, the organisation of residents in Kwazulu-Natal under the Abahlali banner brings a new dimension to South African politics. It proves that mass mobilisation is no longer the sole preserve of the workplace. And with the country’s largest trade union federation embroiled in an unseemly fight for its own relevance to the country’s political needs, social movements like Abahlali embody the discontent in the country that is often manifested in service delivery protests.

“With the road blockade as its primary weapon, it has drawn considerable attention to the worsening urban crisis and exposed the limits of the assumption, widespread inside and out of the ANC, that the workplace is the central site, and the trade union the central organisational form, for popular political engagement,” Rhodes University’s Richard Pitihouse recently wrote.

In June a demonstration in Cato Crest by residents picketing the municipality for land whilst to build shacks culminated in residents venting their anger against the ANC, burning the offices of two councillors.

“People got angry and went straight to the road and started to burn tyres, protesting,” Mzimela says. “This whole thing is because of the housing project that is going on here in Cato Crest. It’s only allocated to people who are politically connected with the councillor or with the ANC.

“If you are not an ANC member you can’t get a house.”

A few days after the protest, Nkululeko Gwala, a member of Abahlali in Cato Crest, was found dead.

Gwala had told Durban’s Daily News that he had received death threats.

At the time of his death, Qumbelo had been trying to get the eThekwini Municipality to allocate council houses to shack dwellers whose homes were demolished to make way for the housing development in Cato Crest.

The killing came just hours after eThekwini mayor James Nxumalo and Health MEC Dr Sibongiseni Dhlomo – who is also chairman of the ANC in the city – met residents at the Cato Crest Community Hall to discuss tensions in the settlement.

Abahlali describes both deaths as “assassinations”.

Thabo Mofokeng, a spokesperson for the eThekwini municipality, vehemently denies that the evictions are influenced by politics.

“We don’t look at the political affiliations of any people before dealing with land invasions,” he says.

In the meantime, Ndabankulu says Cato Crest residents are prepared to fight to the death for their right to housing.

“They say it would be better to die once than to die slowly,” he says. DM