Catalans Form Human Chain To Press For Independence From Spain 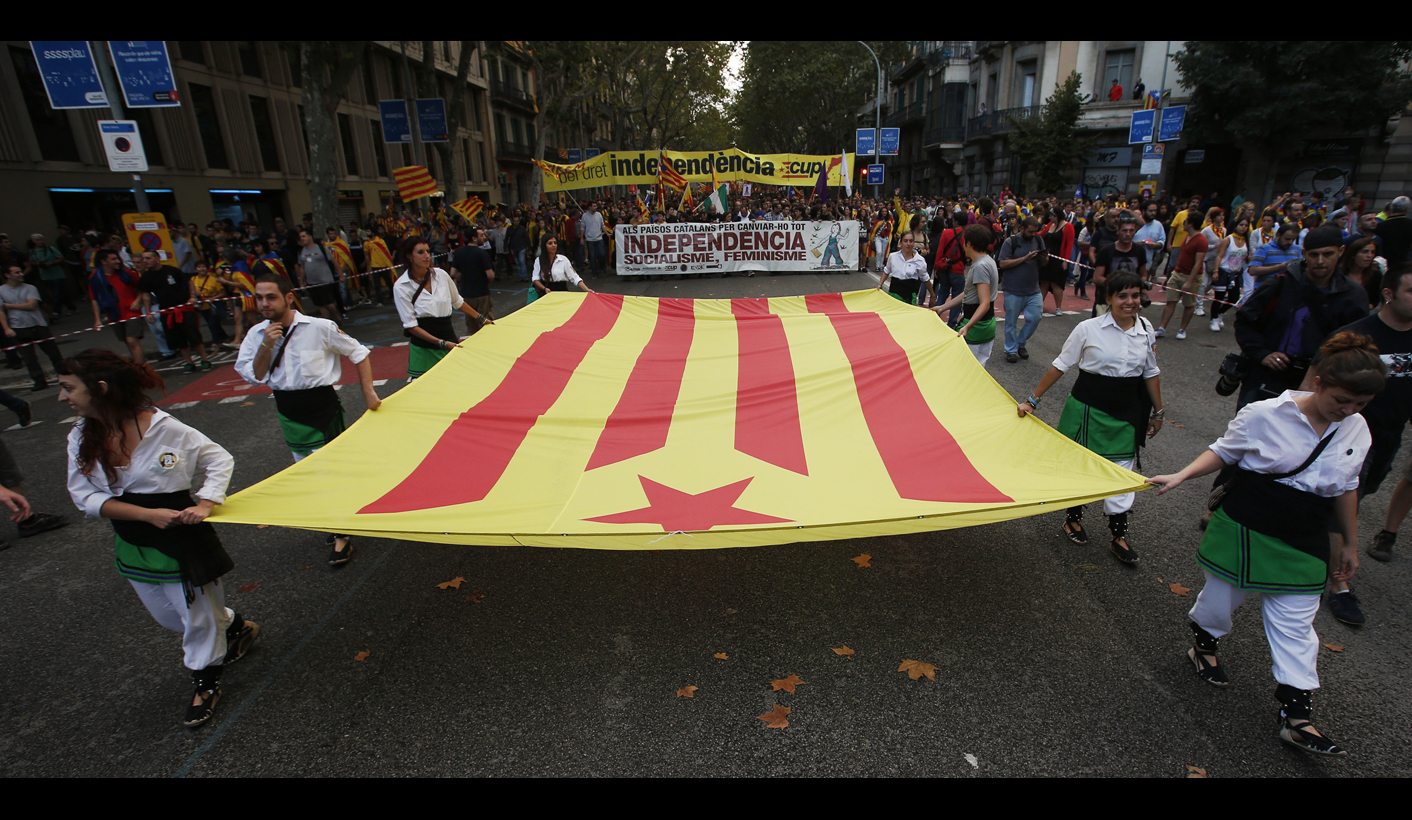 Hundreds of thousands of Catalans held hands in a 400-km (250-mile) human chain across their region on Wednesday to press the Spanish government to let them vote on breaking away and forming their own country. By Julien Toyer.

Demonstrators in yellow T-shirts and draped in blue, red and yellow separatist banners raised their joined hands through cities and along rural roads, jumping and shouting in celebration when the chain was completed.

“We want a referendum to see whether there’s majority support for independence. The problem is Spain won’t listen. Our only hope … is that Europe and the rest of the world put pressure on the Spanish government,” said Ester Sarramona, a 39-year-old civil servant.

Sarramona, her husband and their children joined the chain in the heart of Barcelona, Catalonia’s capital. Like many other Catalans, they said their region was treated unfairly over taxes and cultural issues such as the Catalan language, despite having significant self-governing powers.

A deep recession and cuts in public spending in Catalonia, a wealthy industrial region in the northeast that accounts for a fifth of Spain’s economic output, have stirred discontent with the central government in Madrid.

Polls show backing for secession has risen steadily in Catalonia, with some registering support as high as 50 percent.

Growing separatism in the region of 7.5 million people has become a headache for Spanish Prime Minister Mariano Rajoy, who is mired in a corruption scandal and trying to pull Spain out of recession while pushing through unpopular spending cuts.

The demonstration, on Catalan national day, aimed to draw international attention to the independence movement.

Spanish Prime Minister Mariano Rajoy and Catalan President Artur Mas met in secret in August and have indicated they could continue negotiations to end a year-long standoff over the referendum and greater tax powers for the region.

Rajoy says a referendum on Catalan independence would be unconstitutional and has pledged to block it in the courts.

“If we don’t get a referendum people will just get more frustrated,” said Bernat Cabero, a sculptor who lives in France and travelled home to Catalonia for the demonstration.

Organizers said more than half a million joined in and accomplished their goal of forming an unbroken line from the Pyrenees in the north to the border with Valencia in the south. Television footage showed huge segments of the line of people.

Traffic clogged highways as police cut some roads. After the chain was formed, the peaceful demonstration quickly broke up and everyone headed home.

The only reported trouble came when around 20 far-right demonstrators, shouting slogans in favour of Spanish unity, set off a teargas-like substance at one Catalan celebration, said local media. Five people needed treatment.

The human chain inspired by a similar event in 1989 that helped the Baltic republics of Estonia, Latvia and Lithuania win independence from the Soviet Union.

Catalan separatists are also watching closely a planned September 2014 Scottish referendum on independence from the United Kingdom, hoping it will promote the idea of self-determination for regions within European Union countries.

Catalans have nurtured a separate identity for centuries, but an independence movement surged recently as many became disillusioned with limitations on the autonomy they gained in the late 1970s after the Francisco Franco dictatorship, which had suppressed Catalan nationalism.

Opponents of independence argue the region has never been an entirely separate state. The Medieval Principality of Catalonia came under the Crown of Aragon, though it was allowed to run its own affairs through an institution known as the Generalitat.

The human chain linked up on Wednesday at exactly 17:14, symbolizing the year 1714 when King Philip V abolished the Generalitat after the War of the Spanish Succession.

Catalan President Mas has threatened to call an early election and use it as a plebiscite on secession if Rajoy uses the courts to block a referendum. This is seen as a risky move as his political alliance has lost ground while a more leftist separatist party has won support in the past year.

Mas is in a delicate position because the Catalan budget hole is so big that the central government had to bail out the region last year.

“We are talking with the Spanish government but I have a lot of doubts over whether it will be fruitful,” Mas told foreign journalists on Wednesday morning.

Rajoy has limited room for manoeuvre as any offer to Catalonia of better fiscal treatment or more autonomy could spur protests in other autonomous regions such as the Basque Country. DM

Photo: Separatist protesters carry a Estelada flag (Catalan Separatist flag) as they demonstrate during “Diada de Catalunya” (Catalunya’s National Day) in central Barcelona, September 11, 2013. A deep recession and cuts in public spending in Catalonia, a wealthy industrial region in northeastern Spain that accounts for a fifth of the country’s economic output, have stirred discontent with the central government in Madrid. REUTERS/Albert Gea