Shouting from the rooftops: the DA ramps up its election campaign and goes high-rise 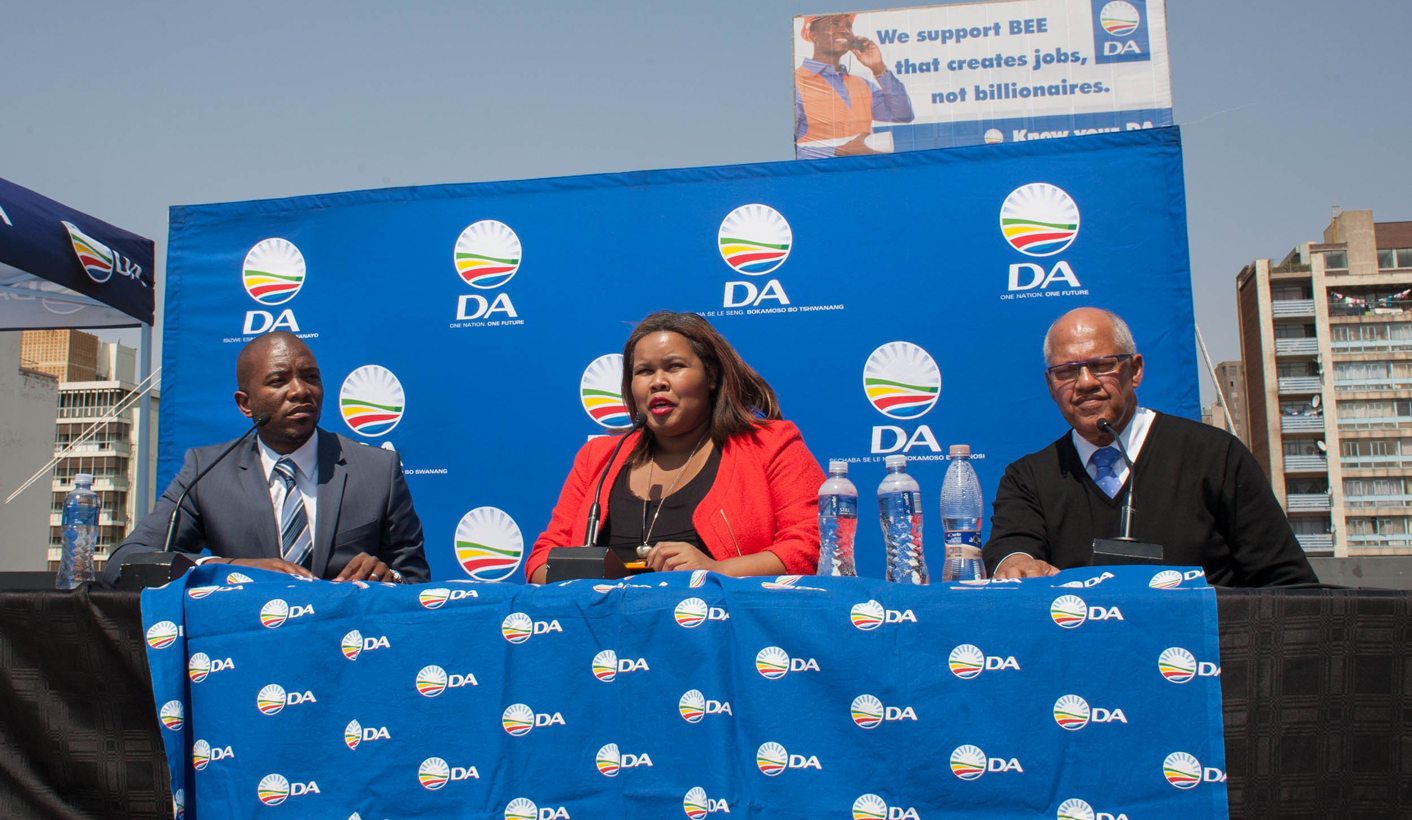 Political parties are counting down to the 2014 elections and on Monday the Democratic Alliance (DA) launched the second phase of its “Know Your DA” campaign. The message: the party supports social grants, land reform and BEE “that creates jobs, not billionaires”, as its new billboard declares. The party will continue to push the campaign, but whether it will make any difference is anyone’s guess. By GREG NICOLSON.

Few DA members will forget the confrontation with Cosatu members at the party’s march for the Youth Wage Subsidy in 2012. The ill-fated attempt to reach Cosatu House erupted into a running street battle between the two groups, and ended with DA members being chased back into Johannesburg’s CBD. In the aftermath, Cosatu held a mini-rally where DA leader Helen Zille was mocked for being a woman who leads a party that speakers claimed “aims to defend and strengthen white privilege”.

The “Know Your DA” campaign was launched in April to respond to that narrative. That month, a Pondering Panda survey found that 52% of young black respondents thought that if elected, the party would bring back Apartheid. Hardly promising statistics if the DA wants to eventually govern the country. The DA decided that it needed to tell its own story, and the first phase of the campaign emphasised the role of some DA figures in the struggle against Apartheid.

Launching the second phase on Monday, Wilmot James, DA shadow minister of trade and industry, joined Mmusi Maimane, candidate for Gauteng premier and Lindiwe Mazibuko, the party’s parliamentary leader, on the rooftop of a rundown Johannesburg high-rise overlooking the party’s new billboard wrapped across the top three floors of another downtown building.

It reads: “We support BEE that creates jobs, not billionaires”.

“Today is the day that we launch our campaign to put right the lies and propaganda which our political opponents have for too long peddled about the DA’s policy response to the all-important questions of redress and reconciliation in our country,” said Mazibuko. She acknowledged that the legacy of Apartheid continued to “hold the people of our country in its grip” and that the policy had had created ongoing economic and social problems.

James unpacked the DA’s position on BEE saying the party wanted the Broad-Based Black Economic Empowerment (BBBEE) Amendment Bill, currently with the National Council of Provinces, to change the empowerment scorecard, which determines a company’s empowerment status. The DA is of the opinion that the scorecard is too focused on ownership transfers and racial targets, and instead should move towards being non-racial by awarding status according to a company’s diversity of ownership and management, whether it will create jobs and whether it will develop people’s skills. The modified scorecard, the party believes, will result in empowerment deals that help benefit the economy and reduce the likelihood of only benefitting the politically connected, he said.

Across the political spectrum, most organisations acknowledge the limited impact of BEE. In 2010, President Zuma said, “In the main, the story of black economic empowerment in the last 15 years has been a story dominated by a few individuals benefiting a lot … This is a state of affairs that can no longer be tolerated.”

Fronting and misrepresenting facts to claim empowerment status will be made illegal, but the DA wants the amendments to go further.

Its ideas are not new, but follow proposals related to building an open economy that includes rather than excludes individuals. The DA supported a review of BEE in 2008, saying, “broad-based economic empowerment will be an integral part” of expanding the economy. The DA’s plan to boost growth and jobs, released last year, calls for a review of the BBBEE scorecard.

Writing in June this year, Helen Zille said, “We support black economic empowerment when it is genuinely broad-based and productive.”

These ideas have been refined and the party is determined to make them known. Much of the DA’s budget for the 2014 elections will go towards winning Gauteng, and it was no surprise that the second phase of “Know Your DA” was launched in downtown Johannesburg. In the run-up to 2014, the DA will continue to campaign heavily in the area, arguing that it is pro-transformation and the best party to improve service delivery and clampdown on corruption.

The “Know Your DA” campaign has been ridiculed and criticised, much like the party’s ill-fated attempt to appeal to voters with a caricature of a young, black South African called Thabo. Twitter users have mocked the assertion that DA leaders were also part of the struggle and the ANC has accused the party of trying to rewrite history and capitalise on the fame of Mandela, who, well, was an ANC leader.

On Monday, political analysts questioned the campaign’s success. “It’s too early to tell,” said Helen Suzman Foundation fellow Aubrey Matshiqi. Elements of the campaign could backfire, he added, such as claiming Madiba.

Vice chancellor of the University of Witwatersrand and professor of political science, Adam Habib, believed it would strengthen support in the DA’s voter base, but doubted it would convince others to choose the party in 2014.

While the DA accepted the criticism, it views the initiative as a success. “In any campaign you run the risk of people commenting about it,” said Maimane. Mazibuko added that talking about the party’s history opens a space for the “opposition’s lies”.

Overall, however, the DA is happy with the initiative. “It’s become clear to people that this narrative peddled by the ANC that you cannot vote for the DA because it will bring back Apartheid is untrue,” said Mazibuko.

Whether you support “Know Your DA” or not, you’ll be hearing a lot more about it. This week Maimane launches his bus tour of Gauteng. “Know Your DA” could be coming to a town near you. DM

Main photo: DA leaders Mmusi Maimane, Lindiwe Mazibuko and Wilmot James addressed media on Monday at the launch of the second phase of the Know Your DA Campaign and the launch of the party’s new Johannesburg billboard.