Is SA’s water too precious to frack with? 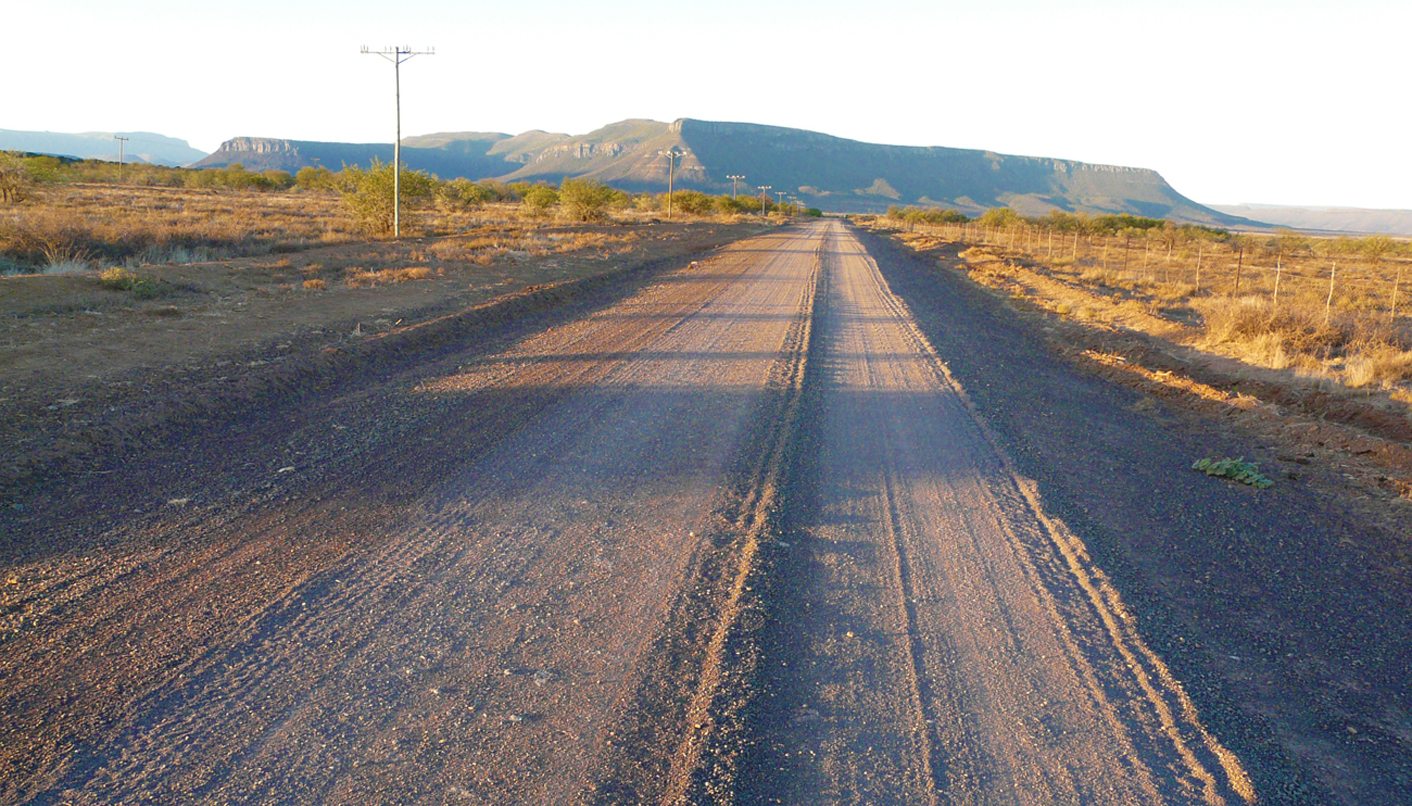 This week, Water Affairs Minister Edna Molewa confirmed that a notice of intention to declare hydraulic fracturing – fracking – a controlled activity, had been gazetted for public comment. Other cabinet members have said recently that shale gas exploration could be authorised before the 2014 elections. And while Molewa says she wants to ensure fracking won’t damage South Africa’s water resources, critics believe this is impossible. By REBECCA DAVIS.

In South African writer Karen Jayes’ critically-acclaimed novel For The Mercy of Water (2012), water has become the single most valuable commodity in a drought-ravaged country, protected by the guards of a sinister “company”.

When the poor didn’t pay for the water, the company guards shut the pipes off at peak times, or denied them entry into the pump areas and the dams were fenced and put under heavy guard, a character explains. But closer to the towns, the company placed stoppers – they look like little plastic buttons – inside all the taps so that the water dripped through two tiny eyes and it took seven hours to fill a bucket. People entered into awful bargains so that each family member might drink and, occasionally, wash. Those who had the money to bribe the guards for more did. Others were more violent. Some got shot.

It’s a chilling dystopian vision, and it’s impossible to read the novel without suddenly feeling intensely thirsty. Jayes’ work is fiction, but South Africa is already a water-stressed country. It’s also one of the few countries in the world that formally recognises access to water as a human right. It’s feared that rising water scarcity could become a big political issue, and we saw a little taste of that recently in the response to Grahamstown’s water crisis, where township residents complained that water outages were only taken seriously when they affected the town’s well-resourced university, Rhodes.

Water scarcity is one of the reasons why fracking has attracted such controversy in South Africa, since the process will be extremely water-expensive in an already water-stressed area (the Karoo). It is also feared that fracking might contaminate the Karoo’s existing groundwater. As such, even though it will be the Department of Mineral Resources’ task to issue exploration licenses to successfully-bidding oil and gas companies, fracking is obviously also going to be the baby of the Department of Water and Environmental Affairs.

“I have taken the decision to issue a notice of intention to declare fracking a controlled activity in terms of section 38 of the National Water Act,” Edna Molewa announced to journalists on Tuesday. This means that companies exploring for natural gas in the Karoo will require a “water use license”, enabling a greater degree of departmental control and oversight during the extraction process.

Though this step has been welcomed, fracking remains an endlessly controversial and emotional issue, with the potential to become a political hot potato. A letter to the Mail & Guardian in January expressed the author’s decision to stop voting for any party which supported the practice. “I do not know whether we have a green party, or whether it is any good,” the author wrote. “But if we do and it is, then it will have my vote until such time as either the DA or the ANC stops its support of fracking and other anti-environmental activities and starts being serious about saving this country from the imminent impact of global warming.”

Nonetheless, it’s become clear that there is hearty support for fracking from the highest political levels in South Africa. A fortnight ago Trade and Industry Minister Rob Davies seemed to express unequivocal support for fracking at a press briefing. EWN quoted him as saying that the government wants shale gas exploration underway before this administration’s term ends. Deputy President Kgalema Motlanthe referred to fracking as a “game-changer” a few days previously before Parliament.

The DA’s stance on the matter has been one of qualified support too, although they appear to be fence-sitting for as long as possible on the issue. In November last year, after the party’s federal congress, it was reported that the DA had come out in favour of  responsible, well-regulated fracking. In January, DA MP Geordin Hill-Lewis denied this, saying that the party had not made up its mind on fracking, as it was “no simple matter”.

Molewa, conscious of her position as an environmental custodian, was careful not to express too enthusiastic an endorsement of fracking on Tuesday. When asked if she was personally in support of fracking, she prevaricated. “I’m not saying I want this personally,” Molewa said. “I want what’s best for our country, including in the water sector and the protection of our environment.” Molewa said that they would be seeking out the best mechanisms to take the country forward without impacting on water resources.

But critics say that fracking cannot fail to have an impact on water resources. The Environmental Monitoring Group’s Taryn Pereira told the Daily Maverick that the issue was not simply the amount of water required by the process. “Shell says they will find alternative water – but they mean they will either go for deep aquifers with brackish water which needs to be treated, or they’ll use sea water and truck it from a desalination plant.” The major problem with this idea, Pereira maintains, is that it would use up water reserves which might be invaluable in the future. “Our argument is that they are locking up future water – water that we’re not currently needing but will soon be the cheapest alternative available, and in future might be the only one.”

A report on the topic of water and fracking released by the EMG last September makes the same point. It holds that the waste water which companies like Shell might make us of in the fracking process “may be the only resource that municipalities can tap into to augment supply”.

At Tuesday’s media briefing, the Department of Water’s chief director of regulation Deborah Mochotlhi was asked whether the stories of problems created by fracking in the USA were cause for concern. Mochotlhi argued in response that the Karoo situation was in “various ways” different from the US, and that technology had improved since the US embarked on fracking.

Someone who isn’t convinced by this argument is filmmaker Jolynn Minnaar, who has spent 18 months conducting research on all sides of the fracking debate over three continents for her documentary ‘Unearthed’, to be released in early 2014. “Methods around the entire process of shale gas extraction have improved,” Minnaar concedes. “However, the high-volume slickwater horizontal hydraulic fracturing being proposed for the Karoo has only been around for just over a decade, and many would argue that the technology is in its nascency.”

Minnaar agrees that it’s difficult to compare the US to the Karoo due to the latter’s different – and very complex – geology. She says we don’t know enough about the Karoo basin yet to quantify the potential damage of fracking on water in definite terms. “The little we do know isn’t too rosy,” Minnaar says. “Even if we assume you could use ‘green chemicals’, you’re still drilling down into the ground past drinking water aquifers and into shale rock that contains heavy metals and in some cases radioactive elements.” The drilling creates a pathway for contaminants – whether pre-existing or introduced by the process – to move either down or up: past the aquifer or to the surface.

But like Pereira, Minnaar’s concern is not solely with the potential contamination of existing water but where the water will come from to service the process of fracking. “The question is where are you going to source the water from – millions and millions of litres per well – and how are you going to treat that water when it returns to the surface so that it never comes into contact with the environment?”

Something all parties are in agreement about is the need for scrupulous monitoring and regulation of the process. The EMG wants to see the Department of Water oversee everything from the sourcing of the water used for fracking, to the compensation for communities potentially affected by water contamination. Minnaar says that the regulatory capacity will need to be vast: “to ensure that on every well, someone was inspecting every single step of the process to make sure that best practice was followed and that the integrity of the well remains intact over decades to come”.

It will still be while before any drilling takes place in the Karoo. Among the international oil companies which have applied () for shale gas exploration licenses in the Karoo thus far are Shell, Falcon Gas & Oil and Chesapeake. As soon as the Department of Mineral Affairs issues the first exploration licenses, they are likely to be legally challenged by bodies like Treasure the Karoo Action Group, which will probably delay the process.

It’s argued that it is essential to start exploring in order to bring some rigour to the fracking fight, as arguments from both the pro-fracking and anti-fracking camps have thus far taken place with a paucity of reliable Karoo-specific evidence. “It is hard to make sense of the fracking debate,” wrote Kerry Gordon for Groundup this week. “There is big money in fracking and companies with vested interested are trying to sway public opinion… But anti-fracking groups also make wildly exaggerated claims. Credibility on both sides is close to zero.” DM