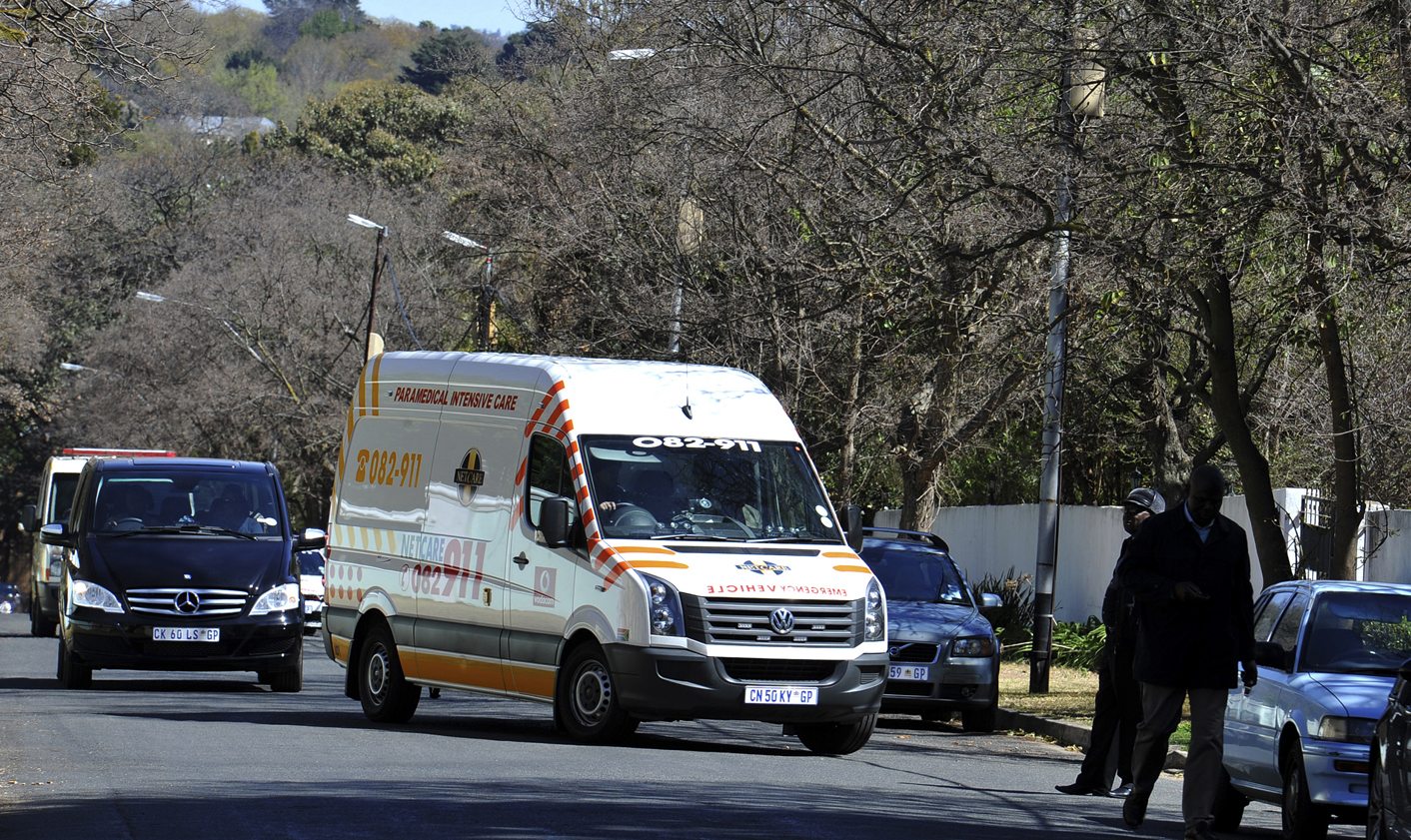 Former president Nelson Mandela is back in Houghton. After almost three months at Pretoria’s Mediclinic Heart Hospital he will continue to receive treatment at his own home. The presidency wants everyone to give him space, but unless his health improves, the public’s interest in his condition will not wane. By GREG NICOLSON.

For 12 weeks I’ve wondered why Mandela’s Houghton home has been the place to visit. Since the former president was admitted to hospital on 8 June for a recurring lung infection, school children have come to sing their respects. Tourists have taken pictures of the rocks painted with words like “I love you tata” that sit beside the fence. Policemen outside the house have had to take inside the bouquets of flowers left for Madiba.

Mandela isn’t even there, I thought; he was in a Pretoria hospital. Even his esteemed wife Graca Machel wasn’t there as she reportedly kept vigil by his bedside. The overflow of emotion as his “condition remains critical”, however, had to spill out somewhere and Mandela’s Houghton home became one of the places the public could pay tribute to the former ANC leader who spent almost three decades in prison for standing against Apartheid.

If his health allows, Mandela may now hear some of those praise songs. The presidency announced his discharge from hospital on Sunday. “Madiba’s condition remains critical and is at times unstable. Nevertheless, his team of doctors are convinced that he will receive the same level of intensive care at his Houghton home that he received in Pretoria. His home has been reconfigured to allow him to receive intensive care there. The health care personnel providing care at his home are the very same who provided care to him in hospital. If there are health conditions that warrant another admission to hospital in future, this will be done,” said President Jacob Zuma’s spokesperson Mac Maharaj in a statement on Sunday.

“During his stay in hospital from 8 June 2013, the condition of our former president vacillated between serious to critical and at times unstable. He has received full medical support and continues to do so. He has also received visits from family, friends and colleagues. Despite the difficulties imposed by his various illnesses, he, as always, displays immense grace and fortitude.”

The ANC welcomed the news on Sunday. “We have noted that his health still remains critical and we are happy that the same medical team that has been treating him will continue with the good work. We believe that receiving treatment at home will afford him continuous support from his family and loved ones,” said party spokesperson Jackson Mthembu.

The announcement was surrounded by controversy, as have been so many of the issues during Mandela’s time in hospital as the state tries to control the flow of information to local and foreign media. The BBC reported the discharge on Saturday after reportedly speaking to a family member. CNN and Sky News followed. “The presidency has noted incorrect media reports that former president Nelson Mandela has been discharged from hospital. Madiba is still in hospital in Pretoria, and remains in a critical but stable condition,” responded Maharaj. CNN’s sources later said they had made a mistake.

Madiba’s grandson Mandla Mandela welcomed the release. “It is a day of celebration for us that he is finally back home with us,” he said, adding it is “particularly heartening because it flies in the face of those who have been busy spreading lies that he was in a ‘vegetative state’ and just waiting for his support machines to be switched off”. His comments were an attack on the former president’s daughter Makaziwe Mandela, whose lawyers are said to have submitted a statement from doctors claiming the family was advised to turn off life support machines.

While Mandela was in hospital, Makaziwe, along with Machel and other family members, won a court order forcing Mandla to return the remains of three of Mandela’s children to be buried in Qunu. Mandla had them moved two years ago to his village Mvezo where he has built a visitor centre. Mandela is expected to be buried with his children in Qunu when he passes away.

Since the former president was taken to hospital, there has been little information on his condition. Maharaj’s updates have continually referred to his condition as “critical but stable” but no doctors have addressed the media and no detailed information on Mandela’s health or treatment has been released. The state failed even to mention the ambulance taking Mandela to hospital in June broke down on the side of the road.

The dearth of information is likely to lead to questions on why he was discharged. Maharaj, who at times has seemed to want to prepare the public for the reality that one day Madiba will pass on, did not say on Sunday that the 95-year-old statesman’s health has improved. Media, particularly the foreign media which considers the issue one of the world’s most newsworthy, has been rapacious on the story and some will likely view the discharge as a sign Mandela may pass away soon, but would prefer to do so surrounded by loved ones at home.

“We now call on all to allow the former president and his family the necessary private space so that his continuing care can proceed with dignity and without unnecessary intrusion,” finished Maharaj’s statement on Sunday.

People were already gathering outside the Houghton property. The media and well wishers were present while Mandela, for the first time in months, was actually inside. The public’s interest in his health will not wane. One only hopes the media shies away from ridiculous sensationalism while the Mandela family lets him recover in peace, allowing his legacy to dominate headlines rather than their attempts to capitalise on it. DM

Photo: An ambulance, believed to be carrying former South African President Nelson Mandela, arrives at his house in Houghton, Johannesburg September 1, 2013. Anti-apartheid leader Nelson Mandela returned to his Johannesburg home on Sunday where he will continue to receive intensive treatment and care after spending three months in hospital with a lung ailment. Mandela, 95, had spent 87 days in a Pretoria hospital after he was rushed there in early June suffering from a recurring infection in the lungs – a legacy from his time in jail under apartheid – that has dogged him for years. REUTERS/Stringer