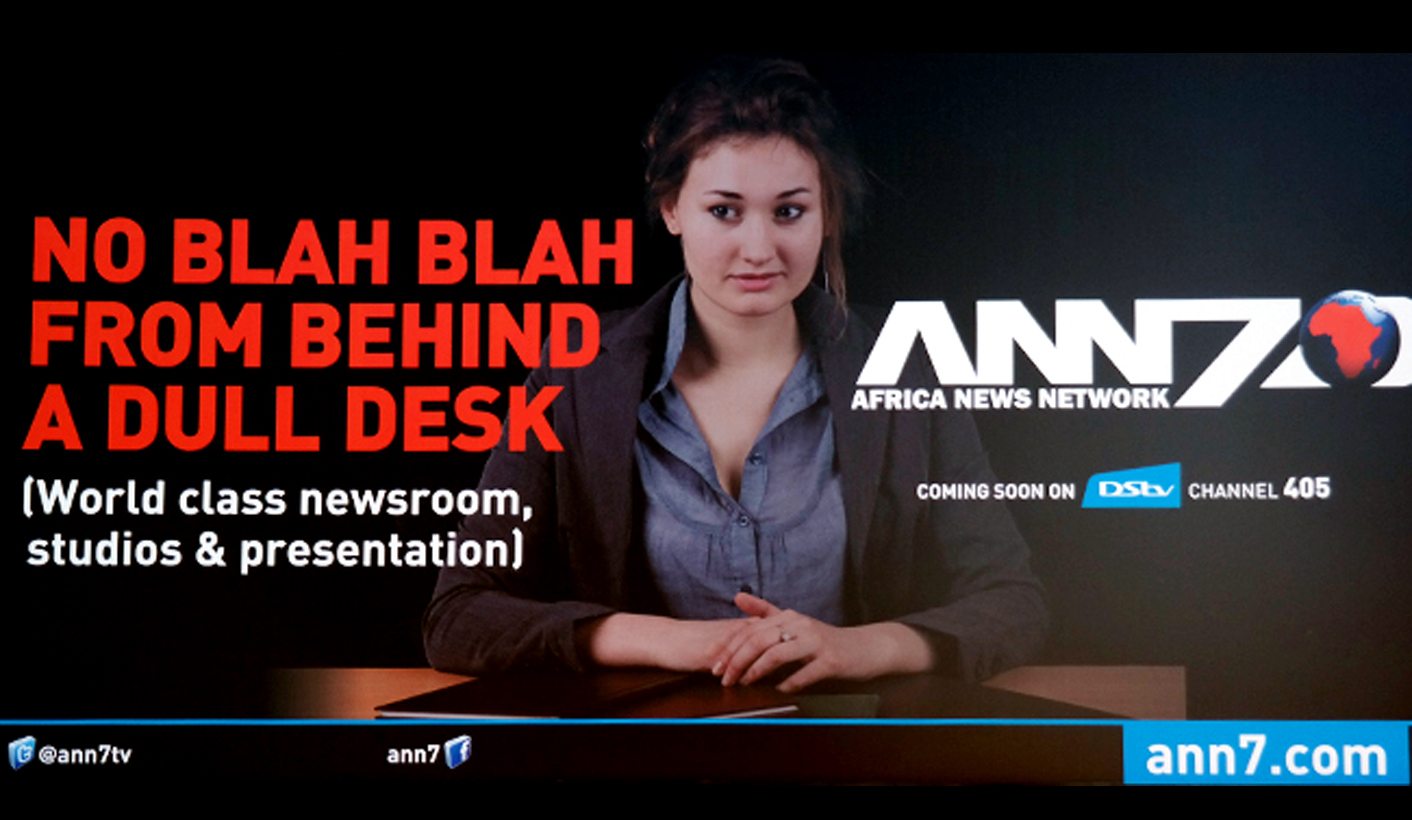 What do you get when you combine Gupta money, supposedly cutting-edge technology, and a bunch of beautiful young models acting as news anchors? What you get is the omnishambles that is ANN7. At least, that’s what the first few days of its broadcast life have suggested. There are those who will say that it’s too early to judge the new 24-hour channel. We beg to differ. By REBECCA DAVIS.

Here at the Daily Maverick, we’re huge believers in admitting to our mistakes and apologising for them. Consequently, we’d like to say sorry for the mixed review we gave to the SABC’s new 24-hour channel a few weeks ago. Because the arrival of ‘Gupta TV’, as ANN7 had predictably been dubbed, makes the SABC channel look like the slickest operation ever and a contender for the Pulitzer.

We would have posted links to the videos mentioned above, but over the course of the weekend most of the videos disappeared from YouTube, replaced by a notice that they had been removed for infringing copyright. The notice was posted by Aiplex Software, an Indian company which has attracted controversy in the past for trying to silence unfavourable reports. It’s an indication that Infinity Media – ANN7’s holding company, a joint venture between India’s Essel Media and the Guptas’ Oakbay Investments – don’t seem to be finding the critical savaging of their channel funny. Another indication is that a Twitter parody account operating under the handle @ANN7news has suddenly been suspended, though others are still up and running.

We’re not ones to bandy around the ‘C’ word – censorship – too loosely, but it must be said that this approach is pretty rich for an operation with the slogan “Truth unfolds”. That’s a weird-sounding phrase, grammatically speaking, but if we’ve learnt anything about ANN7 over the past days, it’s that they’re not “strictlers” for grammar. It’s also weird because it suggests that said process of truth-unfolding is organic, and takes place without human intervention. If the truth is busily unfolding all by itself, you may well think, why do we need another 24-hour news channel?

Still, it was a bit of a relief to discover that “truth unfolds” was ANN7’s chosen slogan, after editor-in-chief Moegsien Williams told reporters last week that the channel would practice with “no fear or favour”. As far as we’re aware, that’s the slogan of a rival channel.

An alternative slogan that ANN7 might consider would be “Not for the Faint-hearted”, because the viewing experience currently is exceedingly nerve-racking. One can never really put one’s feet up, so to speak, because the atmosphere is fraught with danger. Mistakes are occurring so frequently at the moment that if you were to play the ANN7 drinking game that one commentator suggested, you’d probably be vomiting by the second hour.

The mind boggles at what the scenes backstage must be like at the ANN7 offices. The proliferation of technical errors suggests it might be a bit like the control room at the nuclear reactor where Homer Simpson works. A favoured tactic is to leave an anchor’s mic on while they cross to a package. On Sunday, this left a panicked sports anchor clearly audible, hissing “Where’s my script? What’s happening? Where am I going? Where am I going?”

It’s a question that must be on the mind of more than one ANN7 journalist at the moment. The channel claims it has over 70 journalists with international broadcast backgrounds, but so far the likes of the experienced and professional Chantal Rutter Dros have been decidedly in the minority. Over the weekend, at least one experienced journalist is known to have tendered their resignation already – less than four days after the launch. The remainder of the seasoned hacks must be sweating, because their colleagues appear to have been assembled at random from the call list at a Boss Models shoot.

To claim that many of ANN7’s news anchors are models is not an attempt at snark. They literally are. Abigail Visagie is a model and B Com student who recently applied to be a Top Billing presenter. Before Lebogang Keagile landed her job at the channel, she was a part-time model and full-time air hostess. Cleopatra Simelane trained as a “news compiler” but is also an actress and model, and a former Miss Soweto runner-up. Afrika Gola is a model. Taryn du Plooy is a model. Avumile Qongqa is a model.

At other channels, the prestigious news anchor position is generally filled by a journalist with substantial field experience. What ANN7 is proving daily is that there is a gaping chasm of difference between “being able to read” and “being able to read the news live on national TV”. No doubt the channel’s young women will improve with time, but at the moment their delivery is in some cases almost incomprehensible, as if they were reading a recipe in Klingon.

Their weather girls may need additional tuition in geography; one gave the temperatures for both Polokwane and Pietersburg on Sunday. Another allegedly pointed firmly at Botswana while discussing Mpumalanga. They specialise in gently caressing the weather map in a non-specific sort of way, letting their hands airily drift around about five different provinces at once. Perky Lebogang Molefe proceeded to exhort the burghers of two separate South African cities to capitalise on Monday’s good weather by having a picnic, which may have been a trenchant observation about unemployment rates.

But it is not these young women’s fault, and it’s hard not to feel sorry for them. Both ENCA’s and SABC’s 24-hour channels took years of planning, with months of dry runs. ANN7 reportedly had only a few weeks of practice, which suggests either ignorance or massive hubris. Many of their on-camera staff are clearly inexperienced and nervous, being let down by shoddy technical work, and they are being fed to the wolves. (That would be us.) An “insider” told the Sunday Times that ANN7 had hired models as news anchors because “they believe that men will enjoy watching the news when they see pretty girls”. In that case, why not dispense with the news element altogether, and simply air a scrolling catalogue of tits and ass? They could call it MANN7.

One of the more irritating aspects of the channel is that in the absence of paid advertising (for now – more on this anon), they screen a succession of boastful promos hyping up ANN7 and taking potshots at the competition. One particularly surreal promo, which features pictures of scantily-clad female celebrities for absolutely no discernible reason, welcomes the viewer to “our wholesome world of news”. Another complains that other media outlets are continuously “pushing someone’s agenda”. Not us, says the channel that President Zuma secretly visited 48 hours before launch.

These promos are still marginally more bearable than the continuous public service announcements warning about the evils of drugs and corruption, which turn the viewing experience into something like a school assembly. The channel also runs regular reminders to the country to stop abusing women. “What does the word ‘women’ mean to you?” it asks, and the obvious answer – the plural form of ‘woman’ – is not one of the multiple choice options. “Human”, however, is, which is nice.

Among their most-hyped offerings is the talk-show hosted by former government spokesperson Jimmy Manyi. The show’s slogan is “No comment is not an option”, which is gut-burstingly funny if you’ve ever had any contact with government spokespeople. (See, for instance, City Press of 2 March 2011: “Manyi has no comment on Manuel’s letter”.) Manyi was presumably selected for this position due to his reputation as a “straight talker”, which in South Africa is often a euphemism for “racist”. In his inaugural interview with Water Affairs Minister Edna Molewa, he certainly gave it to her straight. If by “gave it to her straight” you mean “handed her a gilt-edged invitation to parrot government policy without being challenged”; Manyi’s opening gambit was a request for the honorable Minister to “allay our fears”.

There have been grumblings on social media about the hostility that the “liberal media”, and its representatives thereof, have shown to ANN7. (We hope we’re liberal media, since we’d hate to be conservative media.) Yes, as has been said repeatedly, the insular South African media scene is notoriously unfriendly to new entries, and turf is jealously guarded. But when it comes to ANN7, there’s more at stake than professional rivalry.

Let’s not forget that the Guptas’ other media investment, The New Age, reportedly bagged over R75 million of government advertising in its first year, despite the fact that the publication doesn’t even have any audited circulation figures. We don’t yet know if the same will be true of ANN7. But it’s certainly a good reason to keep a skeptical eye on the channel. The Guptas have shown that they are not afraid to utilise their friendship with Jacob Zuma for personal benefit, even when such benefit is at odds with due process. Inevitably, particularly since Guptagate, their TV channel will attract some jaundiced glances.

There can also be no sugar-coating the fact that the channel is currently experiencing some major problems. To point this out is not intrinsically ungenerous; it is merely factual. Perhaps, in time, it will right itself. We hope so, because more good media is better for everyone. But we hope so not for the sake of the Guptas, but for the sake of the journalists who took a chance on them. DM