US Corporations can’t be sued for Apartheid, court rules 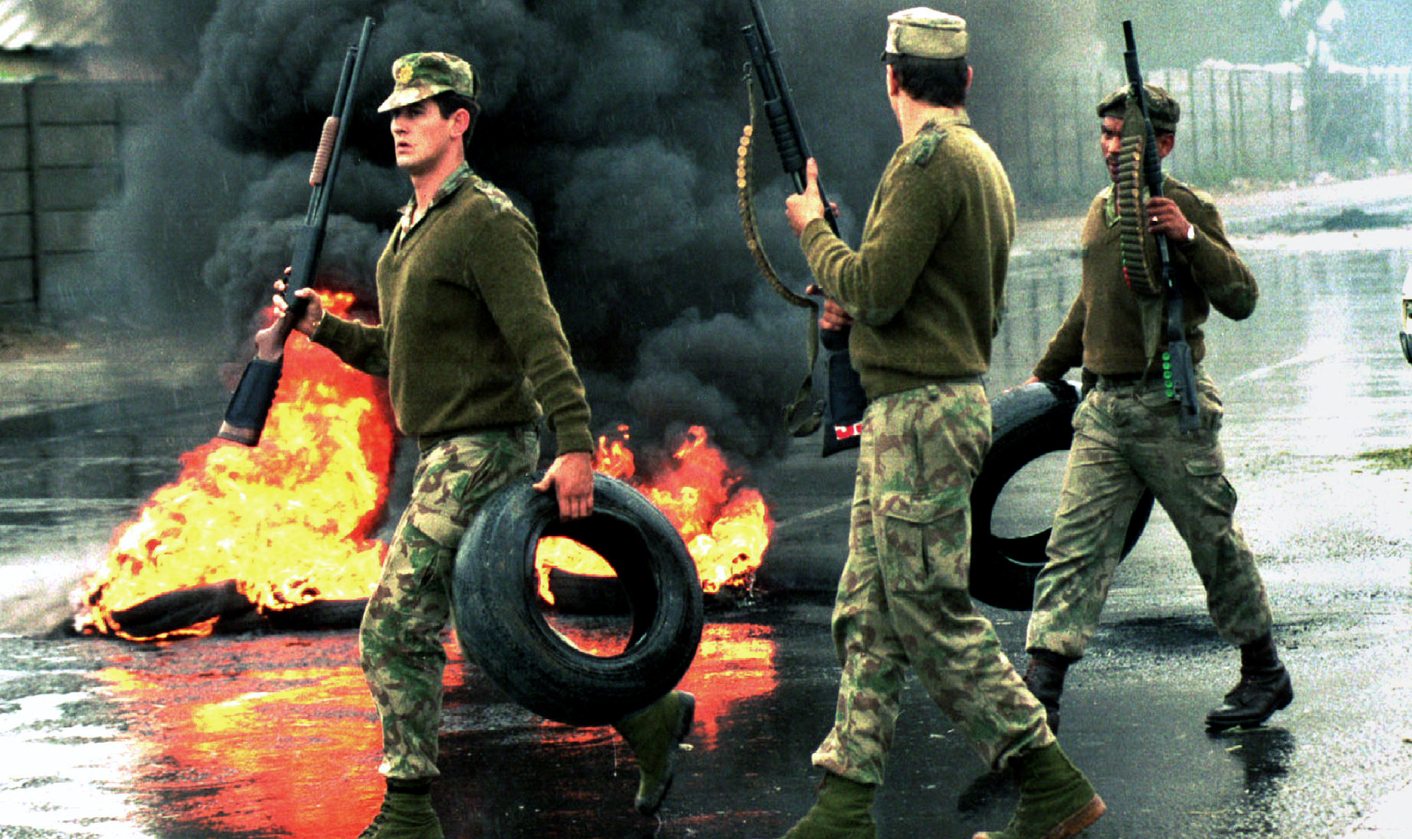 After more than 10 years, a quest to sue multi-national corporations for their role in supporting Apartheid seems to have met with failure. The South African Apartheid Lawsuit filed cases in the US in 2002 against motor companies, banks and technology providers on the grounds that they provided services that propped up the infrastructure of Apartheid and facilitated breaches of international law. The ANC, oddly, may be relieved by the lack of success; the litigation seems to have made them distinctly uncomfortable. By REBECCA DAVIS.

It was a lawsuit that didn’t receive a huge amount of publicity in South Africa, despite its potential implications. Perhaps this was because it dragged on for so long, or because it was complex. Or perhaps it was because the ruling party greeted the litigation with a fascinating ambivalence, despite the fact that you might think that the ANC would leap at the chance to have victims of Apartheid receive lucrative payouts from international corporates.

But this wasn’t the case at all, in fact. The cases were filed in New York in 2002, and a year later erstwhile president Thabo Mbeki came out strongly against the lawsuit. Why? Because no foreign court was going to decide how to deal with Apartheid’s lingering effects. Mbeki said that the lawsuit interfered with “the sovereign right to determine, according to internal political and constitutional order, how best to address Apartheid’s legacy”. They were so against it that Mbeki’s justice minister Penuell Maduna filed a declaration with the US District Court urging that the case not be heard. At that point, a more pragmatic reason was advanced: the government feared it would discourage foreign investment in South Africa.

Let’s pause here to note that what the Apartheid litigants – mobilized by the Khulumani Support Group – were proposing to do is not an unprecedented idea. There has been lobbying for years in the States for the right to hold France’s SNCF rail company accountable for its role in transporting Jews to their deaths in the Holocaust, for instance. The state-owned rail company helped deport 75,000 French Jews to the gas chambers during World War II, even though the company has claimed that it did so under duress.

Surely there could have been no convincing duress arguments for the corporates targeted by the South Africa Apartheid Lawsuit. The eventual aim was to sue General Motors (GM), Ford Motor Company, IBM and Daimler. Originally the lawsuits took in 18 other multi-national oil companies and banks, but these cases were dropped because another US court ruled that these companies had provided normal services during the Apartheid years, and hadn’t only helped provide the infrastructure relied on by security agencies.

Dismissing the cases against the banks in 2004 in New York, district judge John Sprizzo said that no direct link could be proved between the firms’ actions during Apartheid and human rights violations of the era. “At most, by engaging in business with the South African regime, defendants benefited from the unlawful state action of the Apartheid government,” Sprizzo said. At the time, the Apartheid plaintiffs’ lawyer Ed Fagan said it was “sad” that the court had chosen not to recognize that “the rights of Africans should be treated in the same way as the rights of Holocaust victims”.

So the banks and the oil companies went free, and the plaintiffs stuck with the remaining motor and technology companies. The automakers, it was claimed, must have been aware that the customized vehicles they were providing to the Apartheid security forces were being used in townships to brutally quell resistance. IBM, meanwhile, should have known that their computers were supplying the requisite technology to implement the Pass Laws.

Back to the ANC. Zuma was more warmly disposed to the legislation than Mbeki; in 2009 justice minister Jeff Radebe expressed the government’s support for the case to the US courts. But only up to a point: the government seemed to prefer a mediated settlement, and offered Radebe’s services as mediator. (The corporations didn’t go for this.)

Writing about the lawsuit in March 2012, we suggested that one potential reason for the ANC’s equivocation around the lawsuit might be that support for the case could seem a tacit acknowledgement that the victims of Apartheid did not receive sufficient reparations (a bill that the current government would be liable for, however unfair that might seem). At the time, Khulumani director Marjorie Jobson told Daily Maverick: “I think there is a deep denialism in the country around the issue of reparations for gross human rights violations”.

Regardless of the ANC’s hesitancy, the lawsuit received a boost last year when GM opted to settle with the 25 Apartheid claimants. Crucially, the company did not have to admit liability, and the settlement ($1.5 million in shares in the new GM) would only come into effect when GM emerged from bankruptcy. But the move was seen as positive by Khulumani, who urged the other companies to consider settling as well, in light of the fact that three of the plaintiffs had died by this point and a number of others were frail.

But a major blow to the lawsuit’s chances came in April this year. The Apartheid plaintiffs had brought their cases under the Alien Tort Claims Act (ATCA), which allows for civil actions brought by foreigners to be heard in the US in cases of violations of international law. Their lawyers always knew, however, that their chances of success were closely linked to the outcome of another case: Kiobel vs Royal Dutch Petroleum Co. This case was brought by 12 Nigerians from the Ogoni area who argued that Shell was instrumental in the Nigerian government’s crackdown against protestors who were opposed to oil exploration between 1992 and 1995.

In April this year, it was bad news for the Nigerians. The Supreme Court ruled that a federal court in New York couldn’t hear the claims if the conduct occurred “in the territory of another sovereign”. Without a clear indication from Congress, the majority decision stated, statutes should be assumed not to apply outside the United States. “Mere corporate presence” in the US, of the companies being sued, was not enough to justify the case being brought in the US. “In sum, [the Kiobel decision] is likely to make it far more difficult for human rights activists to sue US corporations based on the corporations’ overseas activities,” concluded Forbes.

In light of this ruling, on Wednesday the federal appeals court ruled that the US Supreme Court decision “plainly bars” lawsuits like the South African Apartheid Lawsuit, and that consequently IBM, Daimler and Ford could not be held liable. Reuters reported that the ruling said that these companies could now request the dismissal of the case in district court.

A press release from the claimants seemed resigned to the fact that it might be the end of the road for the lawsuit. Attorney Charles Abrahams looked on the bright side, saying that the Apartheid cases “have contributed to the development of international law related to processes of holding corporations accountable for gross human rights violations. Corporations are increasingly aware that any human rights violations as a result of their operational conduct could attract international law liability.”

But others involved in the case sounded a more doleful note. Former TRC commissioner Dumisa Ntsebeza, a long-time supporter of the lawsuit, lamented: “The dismissal of the cases, after so many years, once again leaves open and unresolved the unfinished business of the Truth and Reconciliation Commission”. Khulumani Director Jobson said, “organized business has yet to account and take responsibility for their role during Apartheid”.

The small amount of money won from GM will go into an Apartheid Reparations and Rehabilitation Trust Fund for the benefit of the claimants, although several died without seeing any money. From the perspective of the Apartheid claimants, the court’s decision now turns the pressure for dealing with Apartheid’s legacy back on the government.

“The focus returns to the failures of the South African government to adequately and effectively deal with the provision of an inclusive programme of reparations to all victims and survivors of Apartheid gross human rights violations,” their statement read. They point out that the Mbeki-era government said that the lawsuit was unnecessary because the government was competent to handle this requirement. “All those disappointed by this latest development, expect delivery on these assertions by the South African government,” the statement concludes. But in reality, of course, that’s highly unlikely.