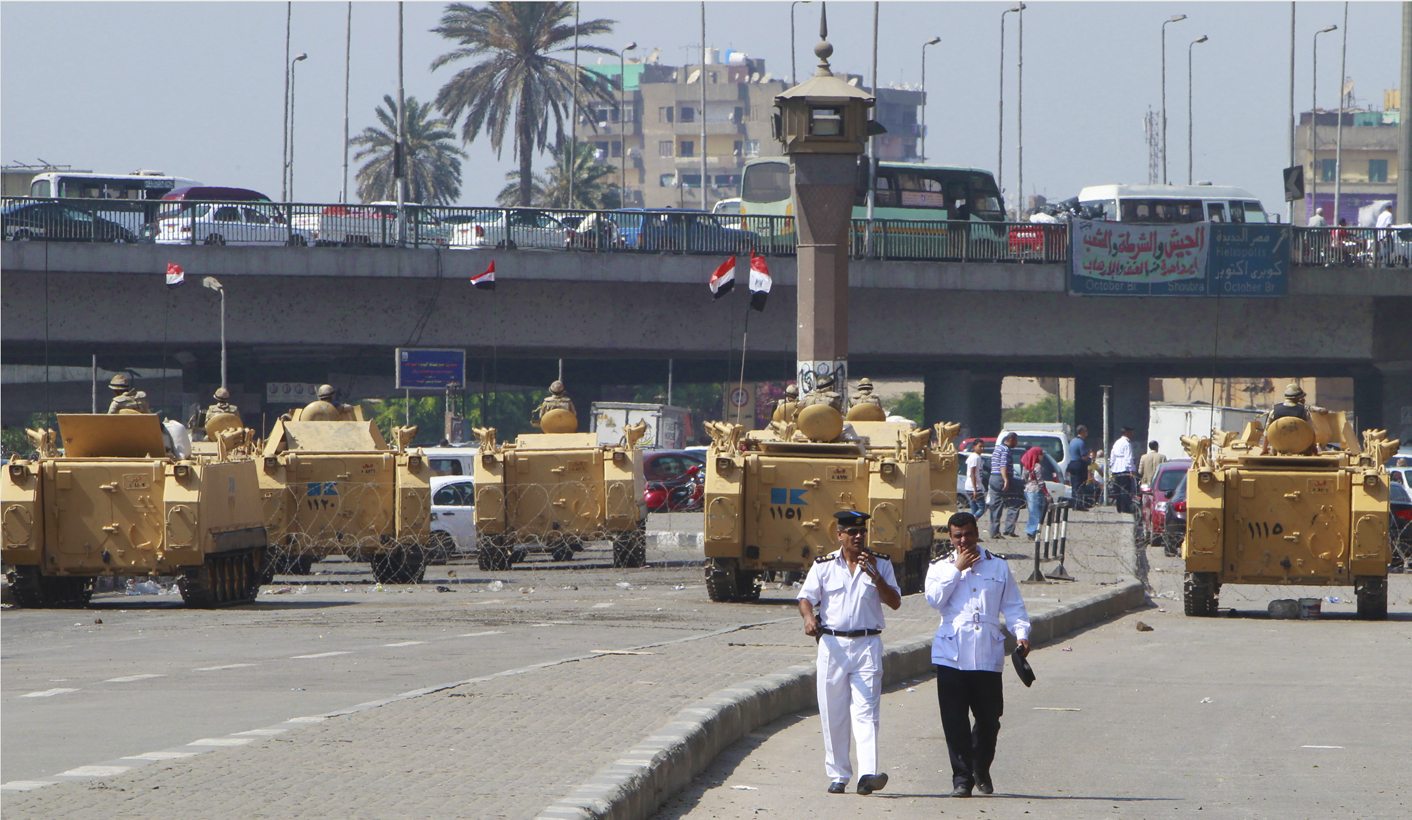 It’s taken just two years for the revolution to come full circle. Elections failed and democracy was a bust, so Egypt is reverting to the only government it really knows: repressive military-backed authoritarianism, fuelled this time round by an influx of Saudi petrodollars. By SIMON ALLISON.

I gave up hope for Egypt the moment I saw the images of millions and millions of people gathered in Tahrir Square on 30 June, begging the military to forcibly remove President Mohamed Morsi and his elected government. There’s only one thing worse than a military coup, and that’s a military coup with a popular mandate that gives the generals the keys to power and tells them they can do what they like with it.

Not that Morsi was a paragon of democracy and enlightened governance. After so long in the political wilderness, the Muslim Brotherhood movement from which Morsi comes revelled in their newfound power, forcing through its own narrow agenda and feeding the secular opposition nightmare that the revolution’s hard-won gains would disappear into the new dictatorship of an Islamic state.

And so the secular opposition, along with everyone else who felt threatened by the Muslim Brotherhood’s petty rule – the Copts, the Mubarak-era bureaucrats, the policemen, the military itself – gathered under a single banner and called for the generals to rescue them. And the generals came.

From there, the rapid deterioration of events was all too predictable as tempers frayed and the country became more and more unruly. Even now, the Brotherhood remains the most popular and best-organised single political force in the country. Its members and supporters were never going to accept sudden disenfranchisement without putting up a fight, as anyone with even a rudimentary grasp of Egyptian politics must have known, especially the millions who gathered in Tahrir Square and demanded that the generals crack the whip. They asked for this.

After last week’s massacres, there’s no going back. Too much blood has been spilt for the battle lines to be un-drawn, although it’s a battle that only the army, with the full armoury and treasury of the state on its side, can win.

“With the overthrow of Morsi by the army on 3 July and the massacre of Muslim Brotherhood followers on 14 August, the Egyptian army is gambling that it can win an outright victory and crush the Brotherhood, eliminating it permanently from Egyptian political life,” wrote Patrick Cockburn in the Independent, in a bleak analysis that questions whether anything other than a repressive, Mubarak-esque military state is now possible. “Just how far General Abdul-Fattah al-Sisi and the Egyptian army and security forces deliberately planned a massacre in order to rule out any future compromise is not clear. Probably the generals were not worried if they provoked a bloody confrontation. If ordinary peacetime politics are replaced by battles in the streets, guerrilla warfare or even civil war, then this merely reinforces the primacy of the armed forces and police. This process is already underway.”

Cockburn’s logic is blunt but inescapable: conflict situations favour the men who have guns and are trained in their use. The worse the conflict (or perceived threat of it), the more comfortable the military.

Lurking in the shadows are the paymasters, for whom Egypt is just another front in their own proxy war fuelling conflict across the region. In the days after the military coup, money started flooding into near-bankrupt Egypt from Saudi Arabia, and then from Saudi pawns Kuwait and the United Arab Emirates.

Ponder, for a moment, the contradictions inherent in this situation. The world’s most conservative Islamic state is supporting an avowedly secular army to brutally suppress people who want to create an Islamic state. It would be absurd if Egypt wasn’t already so far down the rabbit hole. This has become a country where Tahrir Square’s young revolutionaries cheer on Mubarak-era policemen as they gun down unarmed protestors; where Morsi is held incommunicado on trumped-up charges while Hosni Mubarak himself might get released from prison; and where America promotes democracy by throwing cash and weapons at the generals who brought down an elected government.

Ideological inconsistencies aside, the funding from these Arabian Gulf countries (in the form of loans, grants and gifts) is enough to keep Egypt functioning for at least a few months longer. This is desperately needed – the whole revolution business has hit state coffers hard, with the country burning through about $1-billion of its foreign reserves every month. Pre-revolution, these foreign reserves were at a healthy $34-billion; now they’re down to under $14-billion and after last week’s violence an economic recovery seems further away than ever before (especially because Egypt’s major industry is tourism, and right now it’s not exactly a holiday destination).

For Saudi, propping up a military-ruled Egypt is a more than worthwhile investment. The petro-theocracy is currently engaged in a diplomatic power struggle with its much tinier (but much pluckier) neighbour, Qatar, to see who gets to control the post-Arab Spring Middle East. For a while, with Qatar sponsoring the Muslim Brotherhood government in Egypt (to the tune of $8-billion), the Qatar-sponsored rebels making inroads in Syria, and the Qatar-sponsored Al Jazeera news channel carving out a global reputation (not to mention Qatar-sponsored Barcelona winning La Liga, again), it looked like they had upstaged slow-moving Saudi.

For Saudi, this is more than a diplomatic issue; it is an existential threat.

“At the core of the regional rivalry between Saudi Arabia and Qatar are fundamentally different strategies of self-preservation,” explains scholar James Dorsey. “While the royal families of both have sought to buffer themselves by lavish social spending, Saudi Arabia has opted for maintenance of the status quo where possible and limited engagement with the Muslim Brotherhood in Egypt and Syria, toward which it harbours deep-seated distrust [fearing dilution of its own religious authority].

“In contrast Qatar seeks to be on the cutting edge of history and has exercised a sophisticated soft diplomacy with its winning bid to host the World Cup, positioning itself as global hub by developing a comprehensive sports sector, creation of world class museums and sponsorship of the arts. In effect, Qatari support for the Muslim Brotherhood and popular revolts in the region constitutes an integral part of its foreign and defence policy, designed to embed itself in the international community so as to enhance the chances that other nations will come to its aid in time of need.”

Whether this works or not is Qatar’s problem. Saudi’s is to make sure this liberalisation does not impact its own delicately balanced polity, and its support for Egypt is part of this. Better a military state in Egypt than a moderate Islamist government, which might give all those poor and marginalised Saudi citizens some dangerous, subversive ideas.

For Egypt, it’s yet another nail in the coffin of the revolution, which is now set to be replaced by a military state in the mould of the one Mubarak created. With a supposedly popular mandate, a monopoly on the use of force and a steady flow of Saudi petrodollars, there’s very little in the generals’ way. DM