Protea South protests, from the inside

Protea South protests, from the inside 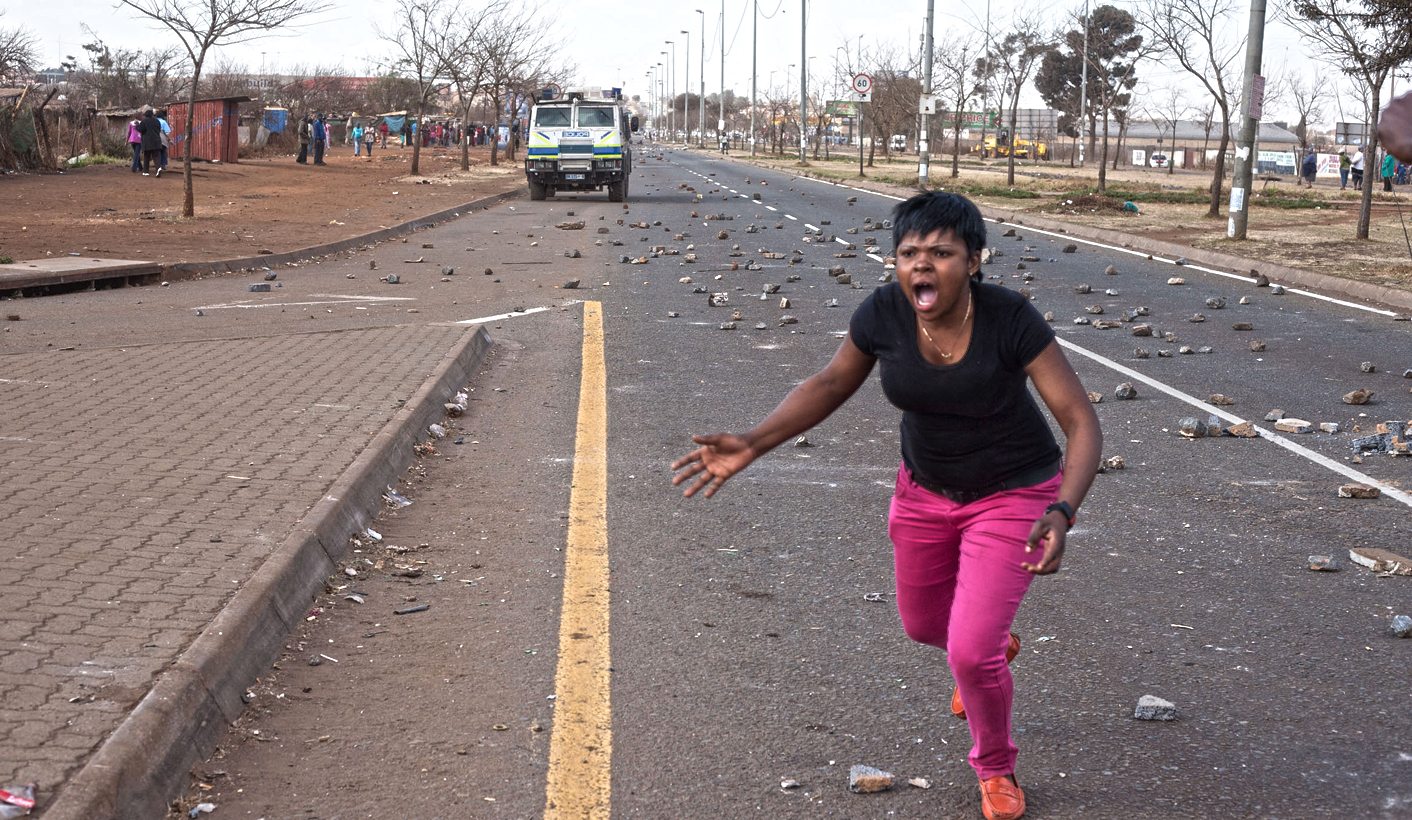 In the early hours of Thursday morning, residents of Protea South, Soweto, started protesting, demanding electricity and other basic services. The protest raged through the weekend. Local resident and Daily Maverick intern BHEKI C. SIMELANE explains the anger behind the burning tires. While reporting on the protest, he was hit with two rubber bullets.

It is nothing new that the life of a shack dweller here in Protea South is reminiscent of the days of Apartheid. Some people here have never used electricity in their lives. They do not know the feeling of lighting up one’s room at the flick of a switch. Mothers who came here as early as 1982 have given birth to children who have given birth to their children in dark, cold shacks. Some people here would be delighted at the efficiency of cooking on an electric stove.

Protea South is divided into three sections. There is a section with smart houses that are bank-financed with bonds. This part makes up about one-eighth of the whole community and rarely experiences power cuts. There are also the RDP houses. These are not so attractive but provide almost all the basic needs like electricity, toilets and water. These people also hardly experience power cuts and they also make for about one-eighth of the whole community. The third and by far the biggest section is made up of shacks: the people who live in them make up three-quarters of the Protea South.

Here, when it rains people stay up all night with empty bowls and buckets to collect water that leaks from the roofs. They throw out tens of litres when the rain is incessant. It is the same with flooding. People have to trot around to save their household goods from getting wet. When it is windy, people stay up at night to save their children when their shoddy roofs blow off. The life of a Protean shack dweller is misery and hardship.

Photo: Workers at a Protea South bulk grocery store sit in their shop the day after it was looted of R50,000-R60,000 worth of goods. (Greg Nicolson)

The shacks come in different sizes and shapes but they are all dark and cold. As the community was protesting to be provided with solutions to their electricity problems, fierce winds swept across the dusty township. Each morning after a windy night, you can hear the sound of nail and hammer as residents repair their damaged shacks. At times, whole mornings can be dedicated to this task. The lives of these people are miserable, and it is surprising that they have never really complained about their living conditions the way they are complaining now.

There is nothing normal about the lives of shack dwellers, for what ‘normal’ is worth under these circumstances. The conditions here are terrible. But the people here are friendly, with the exception of a few nyaope addicts who, over time, have lost touch.

The issues that eventually led to the standoff between the police and the community arose from the events of the past three weeks. For a long time residents have been stealing electricity from the supply to the local clinic, leading to an overload and subsequent power cuts. At times, the clinic would go for several days without electricity. It was decided in a meeting that the clinic would be temporarily closed, pending finalisation of the talks around the electricity problems. Such closure resulted in scores of sick people being turned away or referred to Chiawelo Community Health Centre, which is about 10 kilometres away.

Photo: A man walks past the electricity box powering the local mall. Protestors burned the box on Thursday. (Greg Nicolson)

The community eventually took its grievances to the streets as early as 3.30am on Thursday. Residents woke up to barricaded streets and a hostile crowd. The people had become angry. Thursday’s protests became nasty as police indiscriminately fired rubber bullets and teargas at the crowd. The community members fought back by throwing stones at the police and taking cover in the crowded shacks. Residents also destroyed traffic lights by simply forming groups of about six people each and physically felling the robots. In some cases they hung burning tyres around the indicators.

They burnt tyres and burst out singing in unison, visibly furious. Later in the day, they broke into the storeroom of an Indian-owned store and helped themselves to cases of cold drink and car batteries. In the evening, after a meeting to forge the way forward, they went back to the same store and looted it clean. (According to the owners, they suffered a loss of between R50,000 and R60,000.) Other foreign-owned shops were looted later that same night.

Friday passed without many incidents of violence. On Saturday, it was back to the streets since no one suitable from government came forward to address the community’s concerns. Community members fought with police for the better part of the day. Police Nyalas entered the community, sending residents in different directions and shooting at them with rubber bullets through the windows of the armored vehicles.

At about 16:00 in the afternoon, Julius Malema’s EFF convoy drove though the kasi to the local sports field where they hoped to address residents. Malema himself was not among them, something that annoyed residents, who were looking forward to an address by the former ANC Youth League boss. As the EFF left the crowd, people soon rushed back to their hotspot to carry on with the protests. Protea Gardens, the local mall, was not spared. The centre has been closed for business for days. A huge electricity box that distributes electricity to the whole centre was torched and completely destroyed.

Though the destructive anger of the people – and its consequences – cannot be condoned, it is important to acknowledge what caused the wave of frustration. There are underlying issues that triggered the people’s fury; residents now feel they were sidelined when some were relocated to smarter houses in Luferheng, near Dobsonville. Some say local ANC councillor Mapule Khumalo promised that they would all be moved, but a year after the relocations, nothing has happened. Residents also say that they are aware that there are no more new houses being built in Luferheng.

The other issue concerns electricity. Some shack dwellers had electricity installed legally by Eskom in their shacks while many still remain in darkness. There was never an explanation why this service was only provided to a few, only that the rest of the community would have their electricity installed at a later stage. The people do not know when this will happen. Many people were critical of this action from the beginning, accusing Eskom and the local council of exercising preferential treatment.

The third issue concerns the lack of service delivery in general. The community here has by and large remained calm at the height of serious challenges to their social wellbeing, but it appears the days of silence are over. The community here is demanding that they be provided with electricity and other basic services. They demand that these problems be addressed as soon as possible and that if not, they will be forced to fight on, something that they have already shown they can do in the ugliest of fashions. Protea South’s future could be violent indeed. DM