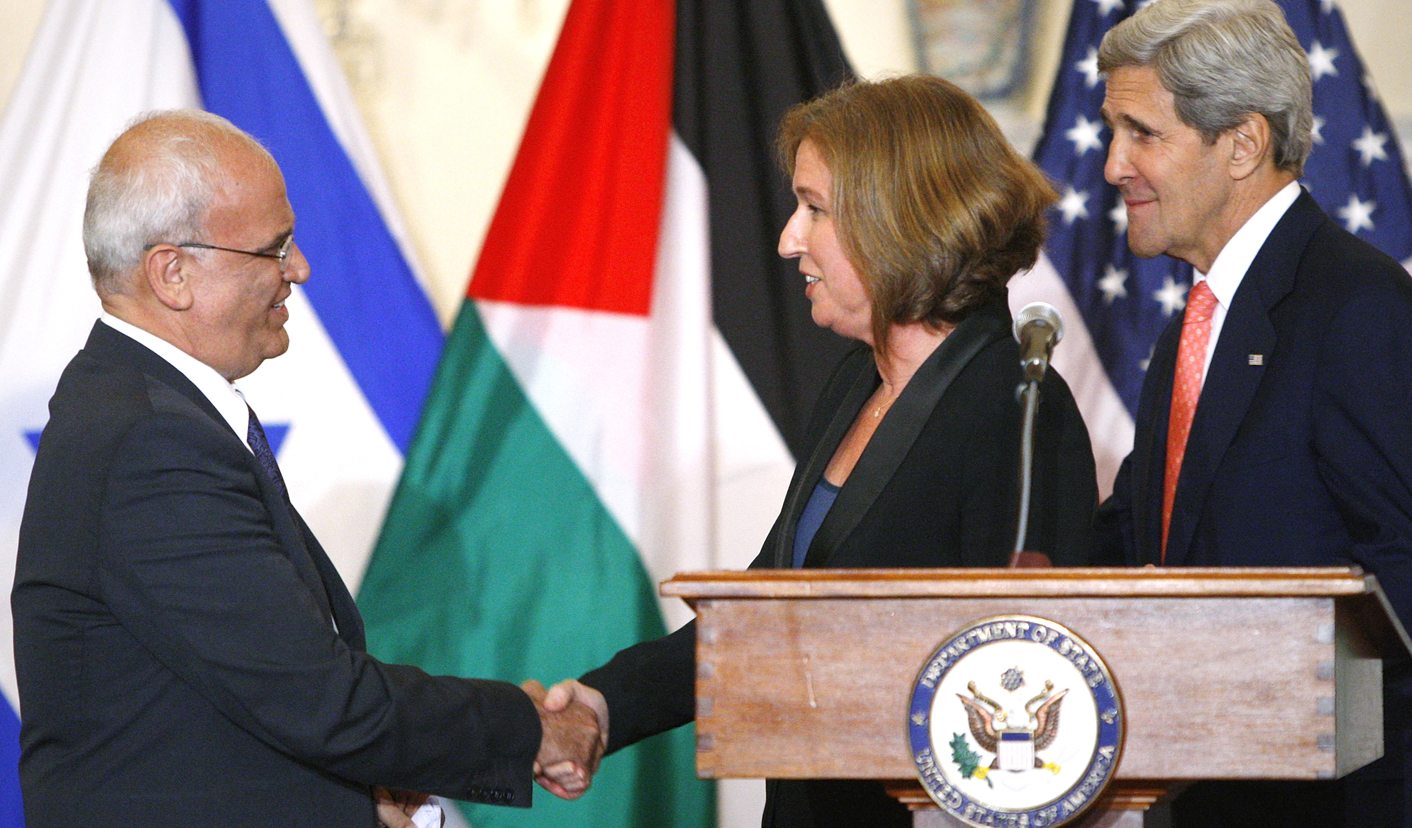 Israeli and Palestinian negotiators on Tuesday gave themselves about nine months to try to reach an agreement on ending their conflict of more than six decades in U.S.-brokered peace talks. By Arshad Mohammed and Lesley Wroughton.

The two sides held their first peace negotiations in nearly three years in Washington on Monday and Tuesday, a diplomatic victory for Secretary of State John Kerry, but one that foreign policy analysts believe has low chances of success.

Flanked by the chief negotiators for both sides, Kerry said he was well aware of the doubts but described the initial talks, which appear to have focused on process rather than substance, as “constructive and positive.”

Speaking after the meetings, which included a session at the White House with President Barack Obama and Vice President Joe Biden, as well as talks between the two sides without U.S. officials present, Kerry said he believed peace was possible despite the obstacles.

“We have had constructive and positive meetings,” he said, as Israeli Justice Minister Tzipi Livni and Palestinian chief negotiator Saeb Erekat stood at his side, noting that all so-called final-status issues to end the conflict were on the table.

“While I understand the skepticism, I don’t share it,” Kerry said. “We cannot pass along to another generation the responsibility of ending a conflict that is in our power to resolve in our time. They should not be expected to bear that burden, and we should not leave it to them.”

The talks will go to a second round by the middle of August.

The resumption of negotiations is a rare moment of good news in the Middle East for the Obama administration, which has struggled to formulate a policy to try to end the civil war in Syria or to facilitate a democratic transition in Egypt.

Kerry, who has prodded, coaxed and cajoled the two sides to resume negotiations in a flurry of visits to the Middle East during his less than six months in office, urged the Israelis and Palestinians to embrace “reasonable, principled compromise.”

However, Palestinian President Mahmoud Abbas struck a sour note on Monday, saying that no Israeli settlers or border forces could remain in a future Palestinian state and that Palestinians deem illegal all Jewish settlement building within the land occupied in the 1967 Middle East war.

“In a final resolution, we would not see the presence of a single Israeli – civilian or soldier – on our lands,” Abbas said in a briefing to mostly Egyptian journalists.

The United States is seeking to broker an agreement on a two-state solution, in which Israel would exist peacefully alongside a new Palestinian state created in the West Bank and the Gaza Strip, lands occupied by the Israelis since the 1967 war. The last direct negotiations collapsed in late 2010 over Israel’s construction of Jewish settlements in the occupied territory.

The major “final-status” issues to be resolved include borders, the future of Jewish settlements in the West Bank, the fate of Palestinian refugees and the status of Jerusalem.

Foreign policy experts voiced deep doubts about the odds of success for the peace talks, the latest in a long series of U.S. brokered efforts that have failed, including former President Bill Clinton’s 2000 Camp David push.

“The initial indicators are not overly encouraging: that U.S. Secretary of State Kerry had to invest so much time and effort just to get Israelis and Palestinians to agree to meet suggests that he may want the talks more than them,” said Rob Danin, an analyst at the Council on Foreign Relations.

“So far, what the parties have mainly agreed to is a process, not to a deal,” he said in an opinion piece for CNN.

Kerry said Israel had agreed to take unspecified steps to ease the lives of Palestinians in the West Bank, which is ruled by a Palestinian Authority dominated by Abbas’ Fatah faction, and the Gaza Strip, where the Islamist Hamas group holds sway.

Among the many obstacles to any agreement are split opinions within both the Israeli and Palestinian publics.

Resuming talks is unpopular among some of Abbas’ supporters in Fatah, let alone Hamas, which has condemned the effort. The politics are also difficult for Israeli Prime Minister Benjamin Netanyahu, with some of his coalition partners opposed to creating a Palestinian state.

Livni, the chief Israeli negotiator, sought to cast the talks in a positive light. “We are hopeful, but we cannot be naive. We cannot afford it in our region,” she said.

“It’s going to be hard, with ups and downs. But I can assure you that … in these negotiations, it’s not our intention to argue about the past, but to create solutions and make decisions for the future.”

Erekat said it was time to end the conflict. “Palestinians have suffered enough, and no one benefits more from the success of this endeavor more than Palestinians,” he said. “It’s time for the Palestinian people to have an independent, sovereign state of their own.” DM

Photo: Chief Palestinian negotiator Saeb Erekat (L) shakes hands with Israel’s Justice Minister Tzipi Livni near U.S. Secretary of State John Kerry after announcing further talks at a news conference at the State Department in Washington July 30, 2013. Israel and the Palestinians will seek to reach a peace agreement within nine months and negotiators will meet again within two weeks after holding a “positive” first round of talks, Kerry said on Tuesday. REUTERS/Jonathan Ernst