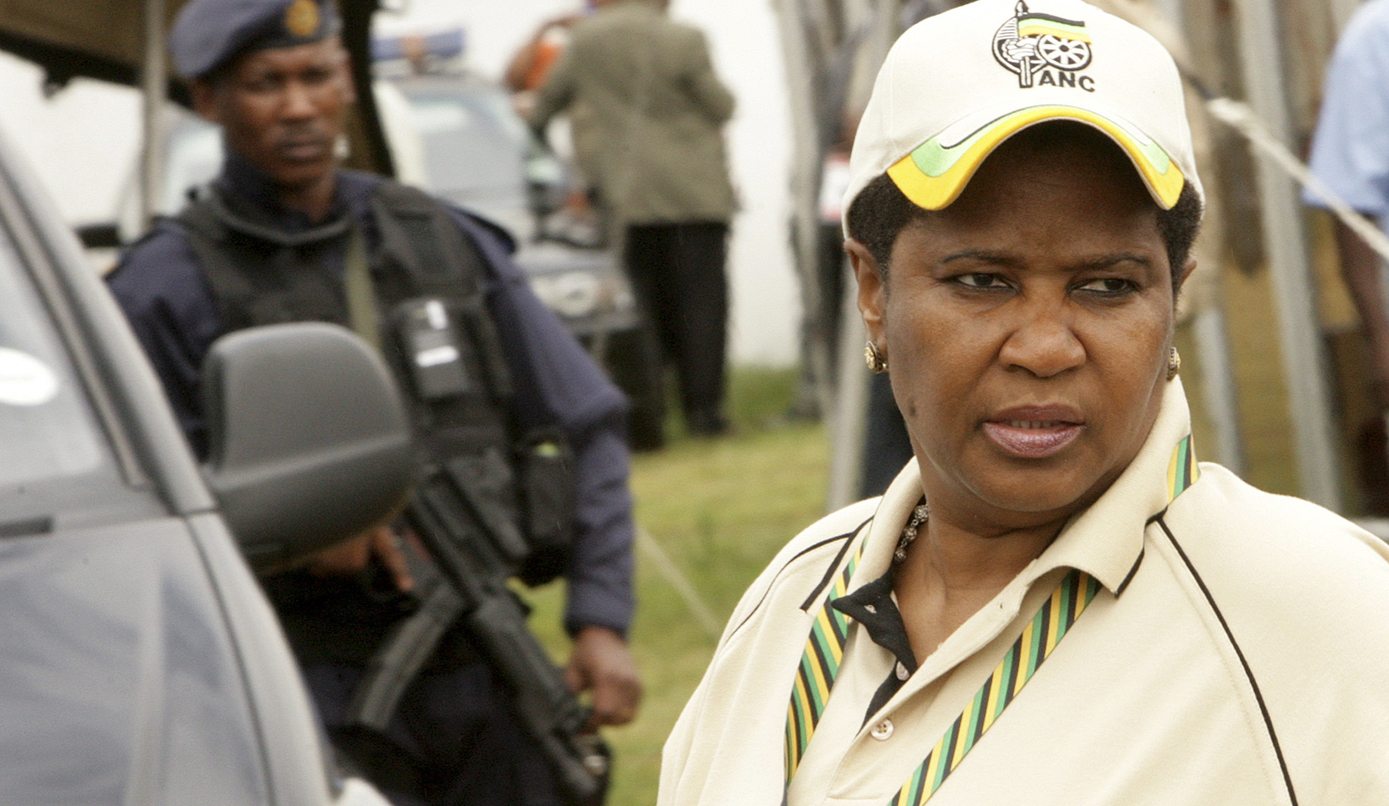 Female ministers who left government following Mbeki’s resignation in 2008 seem to be doing pretty nicely elsewhere. Phumzile Mlambo-Ngcuka is to join the ranks of South African women taking up powerful roles on the global stage, in her new role as Executive Director of UN Women. The examples of the likes of Mlambo-Ngcuka and Geraldine Fraser-Moleketi seem to suggest that South Africa’s female politicians can do rather well outside South African party politics. By REBECCA DAVIS.

Mlambo-Ngcuka will attempt to fill the shoes of popular Chilean politician Michelle Bachelet, who announced her resignation in March to head back to Chile for another bite at the presidential apple. Since Bachelet’s resignation, there has been much speculation as to her successor. India’s Lakshmi Puri, who served as Deputy Executive Director under Bachelet, was thought to be close to the top of the running. Other names bandied around were those of Rwandan Foreign Affairs Minister Louise Mushikiwabo and Tanzania’s Asha-Rose Migiro, a former UN Deputy Secretary-General.

If the recruitment process for filling Bachelet’s position was similar to the one which saw Bachelet appointed, Mlambo-Ngcuka may have been in for quite a rigorous time of it. For the first Executive Director appointment, 26 candidates from around the world were shortlisted, who were then screened by a selection panel of senior advisers and the deputy secretary-general. Three finalists were then interviewed by Ban himself.

For Mlambo-Ngcuka to have been selected out of what would certainly have been a shortlist of highly accomplished women internationally is therefore no mean feat. She also faces a meaty task; Bachelet has been criticised in some quarters for having achieved too few practical outcomes from her time in office. Then again, perhaps this is more down to the nature of the status of UN Women rather than any failing on Bachelet’s part. Bloomberg wrote, upon her resignation: “At the UN, where she enjoyed a high profile, she does not leave much of a legacy as her office carried no executive powers and her role was confined to raising awareness about the condition of women”.

In addition to the difficulties inherent to the job, Mlambo-Ngcuka will enter office at a time when the body is already facing a severe funding shortage. Discussing Bachelet’s hypothetical successor in March, UN spokesman Martin Nesirky said: “We need someone who is an incredibly strong advocate for women’s rights, someone who is going to take on leadership of this organisation at this moment when we are facing a financial crisis and when the gains that we have made in so many countries are at risk of being eroded, in part because of the financial crisis”.

A big job, in short, but the UN clearly feels that Mlambo-Ngcuka is the woman for it. Announcing Mlambo-Ngcuka’s appointment, the UN paid tribute to her “wealth of experience in advocating for women’s issues with a combination of strategic leadership, consensus building and hands-on management experience”. President Jacob Zuma called her appointment “a true measure of recognition…of her contribution to the advancement of women in South Africa”.

That’s a gracious acknowledgement from Zuma, with whom Mlambo-Ngcuka may not share the closest of relationships, considering that her husband (Bulelani Ngcuka) was responsible for bringing charges against Zuma during his time as head of the NPA. Then there’s the fact that Mlambo-Ngcuka consequently replaced Zuma in the position of deputy president. Erstwhile president Thabo Mbeki was a vocal champion of Mlambo-Ngcuka, and at one stage it seemed like she had a real shot at the top job.

“Mlambo-Ngcuka’s close association with Mbeki is both a blessing and a potential disadvantage,” wrote William Gumede in 2005’s Thabo Mbeki and the Battle for the Soul of the ANC. “She stands to benefit from the economic successes notched up during his presidency, but should a rebellion against Mbeki’s leadership style erupt at the 2007 national conference, her proximity to the president could severely hamper her aspirations”.

It happened virtually as Gumede predicted. Polokwane saw Zuma victorious, and Mlambo-Ngcuka’s top 6 position taken by Mathews Phosa. When Mbeki resigned on 20 September 2008, Mlambo-Ngcuka’s resignation followed. In an interview with Fiona Forde in 2009, Mlambo-Ngcuka explained that it was not her wish to leave the ANC after Polokwane. She returned to her ANC branch in Milnerton, Cape Town, and intended to “just work myself out and not sulk. But there just wasn’t room for that.”

Mlambo-Ngcuka went on to join Cope. Shortly after hitching her wagon to the fledgling party, Mlambo-Ngcuka was offered a position on its congress national committee, a gesture which she said “humbled” her, but she turned it down in July 2009 on the grounds that her frequent travel obligations would not enable her to take up an office-bearer’s appointment.

In 2010 it was reported that there was strong lobbying within Cope for Mlambo-Ngcuka to take over leadership of the party. During the Cope leadership tussle between Mbhazima Shilowa and Mosiuoa Lekota, however, Mlambo-Ngcuka – reportedly a Shilowa-supporter – apparently quit the party in late 2010.

And so Mlambo-Ngcuka was lost to South African politics. “The ANC once brimmed with interesting, complex and sophisticated female leaders,” wrote Ferial Haffajee, following the Polokwane shake-up, in 2008. She bemoaned the fact that the ruling party had “snuffed out the potential of female politicians, painting them all in shades of grey”.

Haffajee cited then-Minister for Public Service and Administration Geraldine Fraser-Moleketi as an example of a minister whose talents were being squandered: “[Fraser-Moleketi] should be unshackled from the important but dim world of public service to do something interesting, like intelligence”, Haffajee wrote. Fraser-Moleketi, Gumede suggested in 2005, is “highly intelligent and politically astute…her abilities are beyond reproach”.

But Fraser-Moleketi was one of Mbeki’s “power women” too, and Mbeki’s exit in September 2008 saw Fraser-Moleketi and her husband – Deputy Finance Minister Jabu Moleketi – both call it a day as well. Although Fraser-Moleketi tendered her resignation only after Mbeki’s fall, there were inklings that she was looking for an out some time earlier. In May 2008, academic Richard Calland wrote in the M&G: “I have it on good authority that at least two Cabinet ministers—Geraldine Fraser-Moleketi and Sydney Mufamadi—have applied for or are actively pursuing positions in the United Nations”.

If this was true, Fraser-Moleketi’s pursuit paid off (though Mufamadi’s, it appears, did not). In January 2009 it was announced that Fraser-Moleketi would be appointed to another plum UN role: as democratic governance director in the UN Development Programme’s Bureau for Development Policy. At the time, she said of her relationship to South Africa: “I will still contribute from wherever I am as a patriot.”

Fraser-Moleketi has been in the role ever since; but last week – coincidental with the announcement of Mlambo-Ngcuka’s job – it was revealed that Fraser-Moleketi would be leaving the UN at the end of August to join the African Development Bank as Special Envoy for Gender.

It is said that Mbeki is still held in high regard on multi-lateral platforms, so it is possible that the likes of Fraser-Moleketi and Mlambo-Ngcuka owe some of their post-politics success to his influence. Nonetheless, it is surely a sobering thought that the same women who are held in sufficiently high esteem internationally to take up powerful global roles were essentially discarded by the ruling party which once was their political home.

This is not to say that either woman had an unimpeachable record during her ministerial tenure. In addition to a number of financial scandals of which she was later cleared by the public prosecutor, Mlambo-Ngcuka suggested in August 2005 that when it came to land reform South Africa had “lessons to learn from Zimbabwe – how to do it fast”, prompting an objection from the DA. In 2006 she angered free speech advocates by suggesting that South Africa needed laws to prevent organisations from “spreading panic”, after environmental activists called for an investigation into workers who fell ill at a nuclear installation.

Fraser-Moleketi, meanwhile, made enemies for her attempts to downsize the welfare department and cut child grants. She was booed by unionists in 2004 following her efforts to scale down the public service.

Despite this, that the capabilities of both women should be recognised and rewarded by bodies like the UN surely highlights the fact that the ANC’s system of alliance-driven politics is often wasteful of talent. On the other hand, it must be said that not all of Mbeki’s female favourites have been left out in the cold. Former Agriculture Minister Thoko Didiza made a comeback to the ANC NEC at Mangaung last year: further proof that in South African politics, it ain’t over till it’s over. DM