Daily Maverick interview: On the frontline of initiate deaths 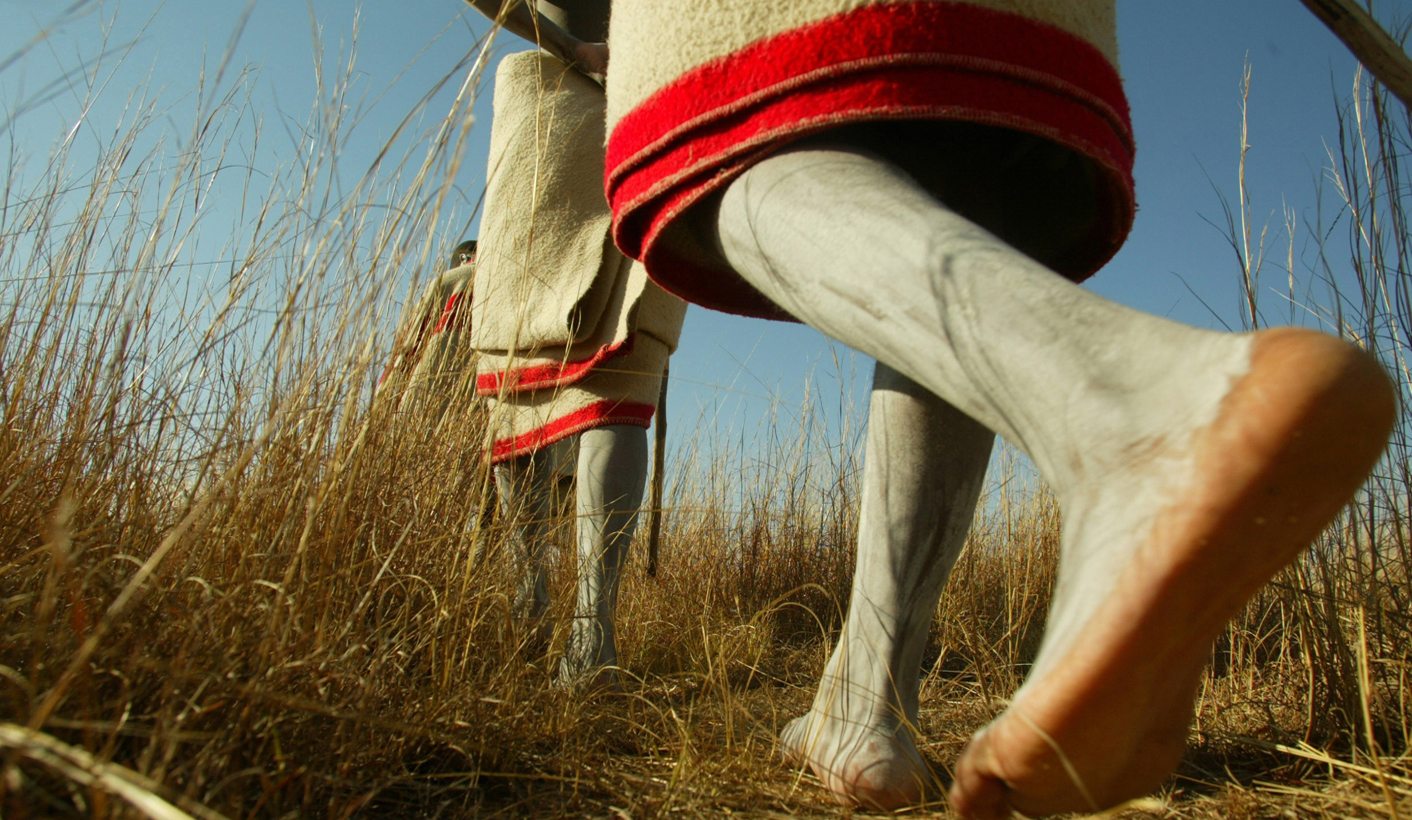 The number of fatalities at initiation schools continues to rise. At least 30 initiates are dead and over 300 hospitalised in the Eastern Cape. Another 36 died in Mpumalanga in May. To understand the catastrophe, GREG NICOLSON speaks to Nkululeko Nxesi, an activist and founder of the Community Development Foundation for South Africa, who is working with the Department of Health to safeguard initiates by monitoring schools in Eastern Cape. Rescuing boys in danger and providing daily updates to Health Minister Aaron Motsoaledi, Nxesi is on the frontline of the crisis.

Tell me about the work you’re doing around initiation schools.

I’m working in Eastern Cape in partnership with the House of Traditional Leaders, local initiation forums and the Department of Health doing the monitoring and compliance, going to the initiation schools, checking if they are legal and then also checking if the initiates are in good condition. Those that are not in good condition we take them to hospital for a check-up.

Is it difficult to get access to the initiates as an outside monitor?

It’s difficult in the sense that the schools are throughout the province and the province has many villages and some mountainous areas. Most of the initiation schools are far away and are very difficult areas to get to. However, with the support of the Department of Health and the House of Traditional Leaders the (monitoring) teams have got 37 cars that are 4x4s distributed throughout the province. These teams work with those cars to get to those areas.

However, it is quite difficult. In terms of getting the entry, the monitoring teams have got local traditional chiefs who are part of the teams so they are well aware of the areas where there are initiation schools.

Describe what you’re finding at these initiation schools.

Our findings are very clear. In the Eastern Cape we are sitting with 30 initiate deaths. The majority of these deaths are in OR Tambo and parts of Alfred Nzo municipalities. The common denominator between these municipalities is they are happening in the areas of the amaMpondo. These areas have been afflicted by criminal entities. This is not culture because culture is not done in the way they are doing it here. Firstly, they snatch boys as young as 12. They abduct them. They take them to initiation schools without the consent of their parents. They threaten the community. It’s like they operate like gangsters or a syndicate of some sort. They call themselves traditional surgeons but most of them are not experienced. They do this thing for the money. They threaten the parents and are targeting the vulnerable. In the main, what is happening is they find vulnerable communities and then try to advance their economic benefits under the guise of culture.

There is legislation in Eastern Cape that stipulates clearly who can go to the initiation school – you must be above 18 – and there are papers that need to be signed by doctors, by parents, chiefs and so on. Most of these initiation schools don’t have these things that are legal. In most cases these deaths happen in those areas where these papers are not there.

Up until the law enforcement is strong and the police come in and the Department of Justice arrest these people and charge these people this is not going to go away. But what we’ve found is this thing must be reclassified. It cannot be called traditional initiation when criminal elements have taken control of the initiation procedure.

Have you come across these illegal schools?

Yesterday we rescued 10 boys in Mbizana and that school was purely, purely illegal. There was not even a single paper. It was in a very steep area next to a river and a forest. We went there with the team in two 4x4s and took the kids to hospital. As I’m speaking to you now I’m in the hospital. We came to check them. They are saying, “Thank you very much; you saved our lives. We were vulnerable. We couldn’t fight back because we didn’t know what was happening.” They were badly injured in their private parts.

So we do visit these illegal schools and when we need to act in terms of saving the lives we take the children to hospital and then after taking them out of hospital we take them to rescue centres so they can heal properly and continue with the initiation practice until they are ok.

Can you describe the injuries of these boys you rescued?

Some have septicemia. Others have gangrene. Some are badly circumcised because these criminal elements don’t even know how to circumcise. They are badly circumcised so they have wounds. That’s the kind of very traumatic experience. Others have been assaulted. I remember one boy with a swollen knee and then another one with a swollen leg. In the hospital they cut him and water just came (out of the wound). You find that even their groins are in a bad shape and they can’t urinate properly.

Tell me about the people conducting these illegal initiation schools. Do they have an understanding of traditional practices?

You see that’s the problem because here – you must understand the social phenomenon of the whole area. For many years in Pondoland this culture was not practiced in the manner that it is now. We are told that for many years people have been quietly going to hospital, but suddenly there has been this influence from other areas – Matatiele, Mthatha and the Basotho. The parents, the older men, don’t know this culture. As a result, this thing is in the hands of young children. Even the traditional nurses staying with the boys on the mountain are usually young children. You can’t have young children taking care of other children. That’s the problem we’re having. The fathers and grandfathers have taken a backseat. The children are in cohorts with these traditional surgeons to torment our society, to kill our children.

Where we went yesterday we told them that we’re taking these boys. They tried to resist. Then we took the boys to the hospital.

How do communities come to trust these illegal operators and put their children’s lives in their hands?

That’s a very interesting question because the question would be, “Why would you subject your kids to this if you know that each and every year and each and every season there are deaths?”

One, it’s because of peer pressure at school. These boys are being bullied at schools. They are told they can’t use this toilet. They can’t sit at that desk. They can’t date that woman and so on. It becomes worse in the communities during the weekends and holidays. These young boys are looking for a social identity because of this pressure nowadays and succumb and subject themselves to this.

Now, when they go to their home there are two scenarios I’ve picked up. One, they will speak to their mothers because their fathers are against this practice so their fathers will (say no). Their mothers, under duress, will agree and fund them. But the majority of these boys, they actually steal the IDs of their parents and then they forge the signatures as if their parents have actually given them permission.

There are whole lot (of issues) and when you follow them (you see) these boys are being pressured at school and in their communities, but they are also being touted and enticed by these criminal elements. What I’ve heard is that if I bring a boy to be a potential initiate I am paid something between R150 and R500. So just by bringing a boy and touting I get paid.

It’s a whole range of issues in a complex situation. I’m convinced that health alone cannot address this problem. Health, the House of Traditional Leaders and the Department of Local Government – they are not going to address this problem. What you need is a cluster. You need a multidisciplinary approach where you bring the security cluster – like the Department of Justice, police, intelligence – then you bring social development, you bring education, you bring health, and local government and traditional affairs.

The Health Department has been doing a great job and the Department of Traditional Affairs is doing the same thing, but with the current approach it’s not going to work.

Is there enough political will on this issue to bring the different stakeholders together to tackle the problem?

I think there’s an opportunity for the parties to come together and the reason these parties were not coming together is the analysis of the cause of the problem was not accurate. People thought that they are dealing with a purely traditional issue and left it to traditional leaders and the Department of Traditional Affairs. Now that we know there are criminal elements that are involved, there are issues of psycho-social support, issues of peer pressure, issues of law enforcement, it means we must involve other departments and that’s where we come in to coordinate those processes.

Is the situation improving or should we expect more and more deaths each initiation season?

If these (interventions) were not here in Eastern Cape you could be talking more than 1,000 initiate deaths. The fact that currently we are sitting at 310 initiates admitted to hospital is a clear indication that the campaign is yielding positive results because you could easily count those among the dead if they were not taken to hospital. I’m saying the campaign is yielding positive results, but we can do better than this.

One of the reasons that the number is where it is is because these cases are being reported. In the past years there was an inaccurate recording of what was happening. The fact that we are seeing (these figures) does not necessarily mean that we are losing the battle but it means that we are (collating) stats properly and also we are bringing kids to hospital.

Hopefully, in December (the next Eastern Cape initiation season) the situation is going to be better than this because we are saying immediately we must start the campaign of social dialogue, of community mobilisation, of engaging school learners, of engaging out-of-school youth. Dialogue with them and say government has allowed people to go to initiation schools and government has set the legal framework and this is how you must utilise that framework. We are going to focus on education so we hope in December things are going to be much better than this. DM