South American Leftists Rally To Bolivia’s Side In Snowden Saga 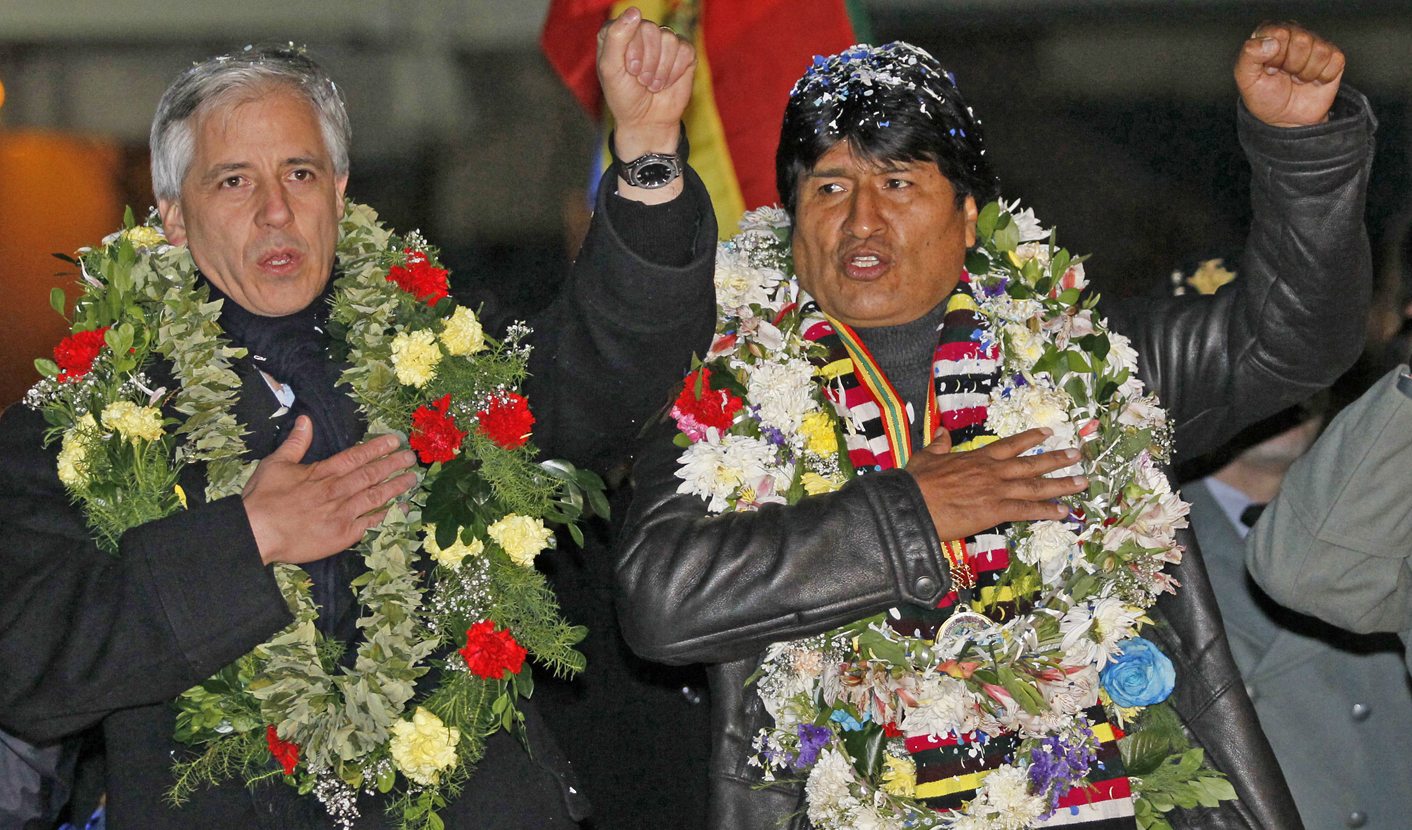 South America's most outspoken leftist leaders will meet in Bolivia on Thursday to rally behind Bolivian President Evo Morales, whose plane was diverted in Europe this week on suspicions that fugitive U.S. spy agency contractor Edward Snowden was aboard. By David Mercado.

The presidential gathering in Cochabamba, Bolivia – where Morales began his political career as the leader of coca leaf farmers – is aimed at expressing outrage over his “virtual kidnapping” and the U.S. pressure they believe spurred it.

“Latin America has to react,” Ecuadorean President Rafael Correa said before departing for Bolivia. “Imagine for one second if this had happened with a European president or the U.S. president – it probably would’ve been grounds for war. And here they think they can infringe and crush international law.”

Despite the rhetoric, no Latin American country has offered asylum yet to Snowden, who is wanted by Washington for disclosure of intelligence secrets. Two radical leftist governments – Venezuela and Cuba – are in a cautious rapprochement with the United States that would be jeopardized if they gave him sanctuary.

Russia is growing impatient over Snowden’s stay in a Moscow airport and officials have urged him to leave.

Bolivia said Morales was returning from Moscow on Tuesday when France and Portugal abruptly banned his plane from entering their airspace and it was forced to land in Vienna. Austrian officials said they inspected his plane there, but Bolivia’s defense minister denied this.

This unusual treatment of a presidential plane upset leaders in Latin America, which has a history of U.S.-backed coups.

Noticeably absent would be presidents from regional heavyweight Brazil and three countries that are close U.S. allies: Peru, Chile and Colombia.

Bolivia and Venezuela said they had received extradition requests for Snowden from the United States, which they repudiated. Bolivia called it “illegal and unfounded” since Morales never even met with Snowden, much less took him aboard.

“While we were flying (home), the U.S. government gave our foreign ministry a scrap of paper asking for the extradition of this young man, Snowden,” said Venezuelan President Nicolas Maduro, who returned from Russia on Thursday after attending an energy conference with Morales.

“They don’t have the moral standing to demand the extradition of a young man who was alerting to the illegality with which the Pentagon, the CIA and the U.S. act,” he said.

U.S. State Department spokesman Jen Psaki, when asked about the request made to Bolivia, said: “We’ve broadly asked for Mr. Snowden to be returned from any country where he may be, where he may land, where he may transit.”

To ally the anger of allies over reported U.S. spying that came to light in the Snowden scandal, U.S. President Barack Obama has agreed to talks with the European Union, and also agreed to bilateral talks with Germany after speaking on Wednesday night with Chancellor Angela Merkel. “I made clear spying on institutions within the European Union is not how we would expect those we consider friends to treat us,” Merkel said.

President Dilma Rousseff, who warned on Wednesday that the diplomatic clash would hurt dialogue between Latin America and the European Union, sent her international affairs adviser and a deputy foreign minister to the meeting.

“We expect the meeting will issue a harsh statement. There will be an elevation in the tone,” an official in Rousseff’s office said. He said the incident could hinder slow-moving free trade talks between the European Union and South America’s Mercosur trade bloc, which Bolivia is in the process of joining.

“We show solidarity with Evo Morales because it is unprecedented what they did to him, but we will not allow this to turn into a diplomatic crisis between Latin America and the European Union,” Santos tweeted on Thursday.

Morales arrived home to a hero’s welcome late on Wednesday with cheering, fist-pumping crowds greeting him at the airport.

“A simple apology from a country that didn’t let us enter its territory is not enough. A lot will depend on the legal and political debate,” Morales said on Thursday.

Bolivia is among more than a dozen countries where Snowden has sought asylum, and Morales has said he would consider granting the American refuge. But he said earlier this week no request had been made.

The 30-year-old Snowden, who worked as a contractor for the National Security Agency in Hawaii, has been trying since June 23 to find a country that will offer him refuge from prosecution in the United States on espionage charges.

But his options have narrowed since he arrived in Moscow from Hong Kong with no valid travel documents after the United States revoked his passport.

Moscow has made it clear Snowden is an increasingly unwelcome guest because the longer he stays, the greater the risk that the diplomatic standoff with Washington could cause lasting damage. DM