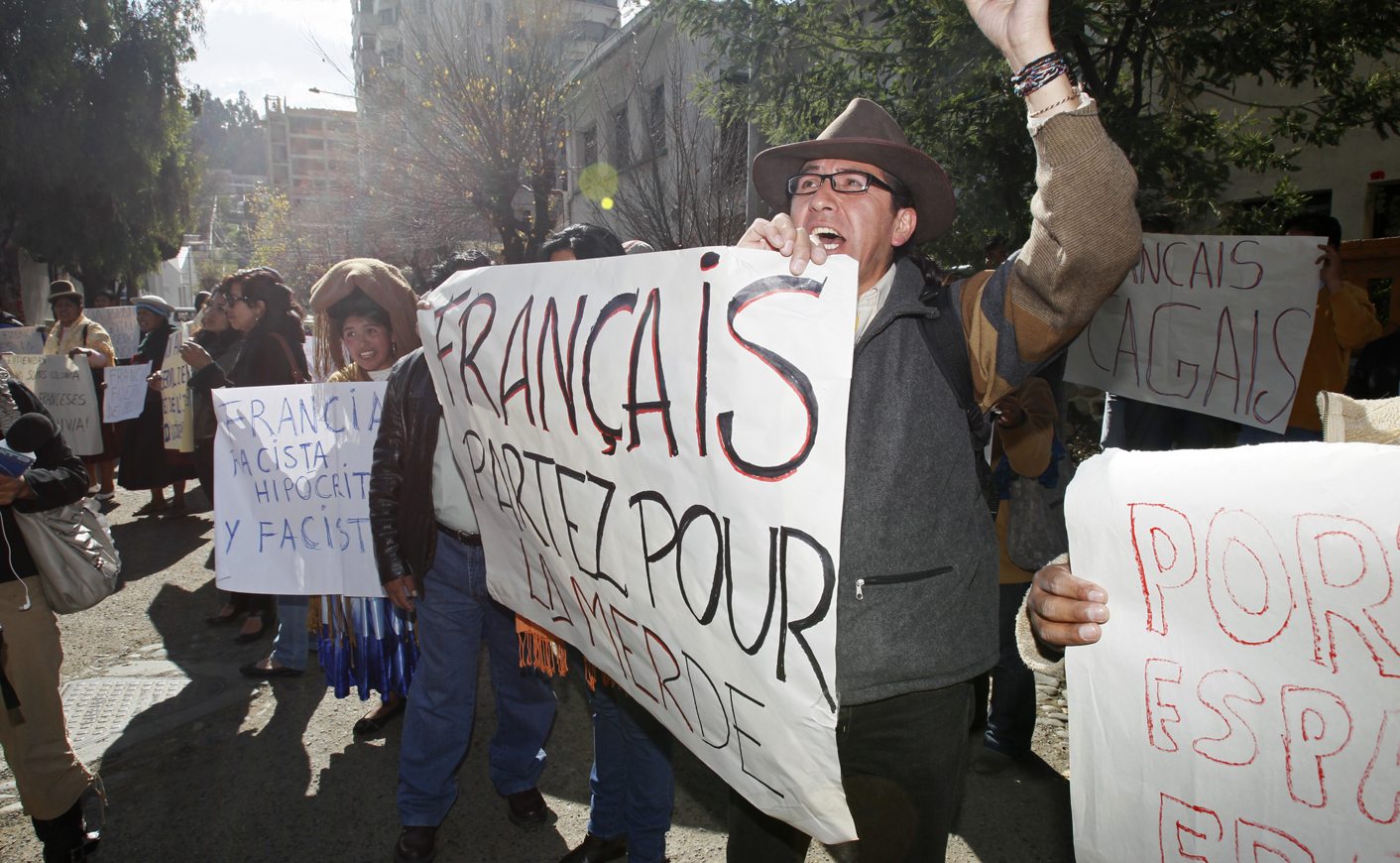 Bolivia said Morales was returning from Moscow on Tuesday when France and Portugal abruptly banned his plane from entering their airspace due to suspicions that Snowden, wanted by Washington for leaking secrets, was onboard. Italy and Spain also banned the plane from their skies, it said.

The unusual treatment of the Bolivian military aircraft touched a sensitive nerve in the region, which has a history of U.S.-backed coups. Regional leaders, particularly from the left, rallied behind Morales, Bolivia’s first indigenous president and a former union leader of the country’s coca farmers.

“(These are) vestiges of a colonialism that we thought were long over. We believe this constitutes not only the humiliation of a sister nation but of all South America,” Argentine President Cristina Kirchner said in a speech in Buenos Aires.

Heads of state in the 12-nation South American bloc Unasur denounced the “unfriendly and unjustifiable acts” and called an emergency meeting of foreign ministers to take place in Lima on Thursday. A smaller group of like-minded presidents also planned to get together on Thursday in Bolivia in a show of support for Morales.

Unasur includes close leftist allies of Bolivia like Venezuela, Ecuador and Argentina as well as more centrist governments like those in Chile and Brazil.

“Latin America demands an explanation,” tweeted Ecuadorean leader Rafael Correa, who said he was one of several presidents who would meet in Cochabamba, Bolivia. “If what happened to Evo does not merit a Unasur summit, I don’t know what does.”

Dilma Rousseff, president of regional economic powerhouse Brazil, issued a statement repudiating the European countries that denied Morales access to their airspace based on what she called the “fanciful” notion that Snowden might be on board.

The Chilean foreign ministry issued a statement saying it “lamented” what happened to Morales and that more clarity was needed on the facts.

Much more blunt was the statement from Mexico’s Congress condemning what it called the “disgraceful and discriminatory” treatment Morales had received in Europe.

Bolivian officials were quick on Tuesday to accuse the United States of strong-arming the Europeans into denying access to their air space in an “act of intimidation” against Morales for suggesting that while attending an energy conference in Moscow he would consider granting asylum to Snowden if requested. Morales said earlier this week no request has been made.

The White House declined to comment on the assertion that it was behind the plane scandal.

A spokesman at France’s foreign ministry blamed “an administrative mishap,” saying France never intended to ban Morales from its airspace and that there were delays in getting confirmation that the plane had fly-over permits.

Morales was expected back in Bolivia Wednesday night.

Snowden is believed to be still in the transit area of a Moscow airport, where he has been trying since June 23 to find a country that will offer him refuge from prosecution in the United States on espionage charges.

The Bolivian government said it had filed a formal complaint with the United Nations and was studying other legal avenues to prove its rights had been violated under international law.

Legal experts say Bolivia could take its case to the International Court of Justice in The Hague if Austrian officials had boarded Morales’ plane in Vienna, presumably to search for Snowden, without his consent.

Bolivian Defense Minister Ruben Saavedra said authorities did not board the plane, contradicting an Austrian official who said the aircraft had been boarded and checked.

Morales has yet to restore full diplomatic relations with the United States after expelling the U.S. ambassador in 2008.

In May of this year, Morales expelled a U.S. development agency from Bolivia in protest after U.S. Secretary of State John Kerry referred to Latin America as Washington’s “backyard.”

The comment was a stark reminder of the United States’ history exploiting South America’s natural resources and supporting some repressive right-wing regimes. DM

Photo: Demonstrators shout in front of the French embassy in La Paz, in protest against the French government’s ban of Bolivian President Evo Morales’ plane in its airspace, July 3, 2013. South American leaders, outraged by the diversion of a Bolivian presidential plane in Europe over the Edward Snowden affair, weighed on Wednesday whether to hold an emergency summit to denounce what some called a U.S.-led act of aggression. Morales was en route from a conference in Moscow to his home on Tuesday when France and Portugal abruptly banned his plane from their airspace on suspicions it was carrying fugitive U.S. spy agency contractor Snowden, who is wanted by Washington. The poster (C) reads, “Fuck you, France”. REUTERS/David Mercado