From collectivism to CEO: the transformation of China’s President Xi 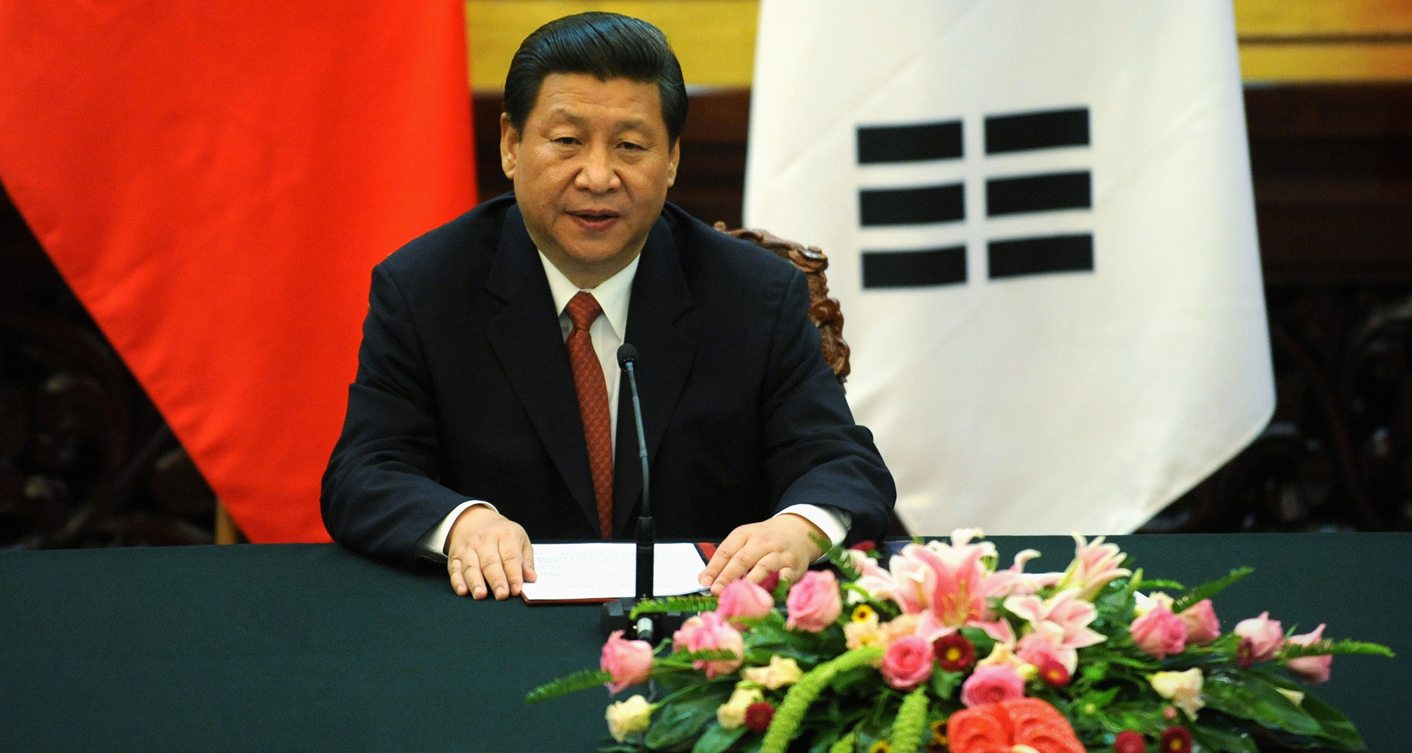 Under President Xi Jinping the old tradition of collective leadership in Beijing is about to go, although the complexities of contemporary China preclude a return to Mao-style helmsmanship. By establishing himself as ultimate leader Xi could yet grasp the chance to break the back of corruption in both the Communist Party and state-owned enterprises. By FRANCESCO SISCI (Asia Times).

China’s top government body, the Politburo of the Communist Party, late last month held an almost unprecedented three-day meeting at which Party General Secretary Xi Jinping did not attack a foreign enemy or internal dissidents, but rather the party members themselves.

Xi argued against the formalism prevailing in the party. He said that it wasn’t enough for senior officials to “strictly abide by party discipline and act in strict accordance with policies and procedures,” but that they should also “strictly manage their relatives and their staff and refrain from abuse of power”. Xi underscored that “the sole pursuit” of party leaders should be “to seek benefits for the Chinese people as a whole”, which is “the Party’s cause and interests”.

As Russell Moses astutely noted after the June 22-25 meeting: “It’s extremely rare for Politburo proceedings to be spoken of in such detail and openness. And it’s unprecedented in modern times for the Party boss to start taking swings at his colleagues at the top by so directly reminding them of their responsibilities – a move that suggests he might be planning something even stronger soon.”

Xi held the meeting shortly after another extremely rare event. On June 7 and 8, he met US President Barack Obama at Sunnylands in California for an eight-hour, one-on-one talk. Historically, only Mao Zedong and Zhou Enlai have held such freewheeling talks with a US president. Even Deng Xiaoping did not have long, free-flowing discussions with the American presidents he met. That is to say that on average Mao and Zhou each spoke with President Richard Nixon for about the same amount of time that Xi spent with Obama.

Moreover, the three-day Politburo meeting, with scolding remarks from senior officials, is not totally unprecedented in party history. During Mao’s times, the Great Helmsman would tell off his colleagues for this or that shortcoming. This huge power vested in Mao was the main cause of the disaster of the Cultural Revolution, according to the people who arrested the Gang of Four in 1976 and established the system of collective leadership with Deng at its core in 1978. These two meetings in June are certainly not enough to make us believe that Xi is posing as a new Mao with Cultural Revolutionary trappings, but they are enough to show us that Deng’s old tradition of collective leadership is gone or about to go.

Contemporary China is too complex and diverse to withstand a concentration of power of the Mao type, which worked in a country that was extremely simple and made even simpler by draconian and cruel land reforms, closure to the outside world, and extreme poverty in the cities and countryside.

Present-day China is the world’s largest trading country; in recent years it has been the single largest contributor to global growth, its peasants are swarming out of the countryside, and within a decade, according to plans drawn up by Prime Minister Li Keqiang, only about 20% of the population will be left in rural areas. The rural population in China was over 90% in Mao’s day.

At the same time, this complex world is also unfit for Deng’s cumbersome system of collective leadership. The system worked in practise in two dimensions: a group of younger leaders would manage the country – around Hu Yaobang in the 1980s; Jiang Zemin in the 1990s; Hu Jintao from 2003 to 2013 – while a group of elderly leaders, guided by Deng until 1995, held veto power over the “managers” and decided on broader strategic issues.

The group led by Jiang Zemin was virtually alone in power after Deng’s serious sickness in 1995 leading up to his death in 1997, but that proved some kind of an exception due to extreme circumstances – Deng’s illness. Yet Jiang’s power was not boundless; it was limited by his peers – Qiao Shi, Li Peng and Zhu Rongji.

The system may have had its virtues. At a time of extreme fragility in China, when the country was crossing the line between underdevelopment and the future, the division and fragmentation of power might have been useful to avert the temptation to revert to a risky Mao-style dictatorship.

Now, times have changed. A huge concentration of power in the hands of one man is impossible as it is very unlikely, for instance, that Xi will carry on holding on power after his two terms in office end in 2023. Yet, in a very diverse world, too much fragmentation of power makes all decisions impossible – or worse, decisions can be hijacked by powerful groups, such as state-owned enterprises (SOEs), that have agendas that might be limited and in contrast to the general interest of the country.

This is where the threat of corruption really comes in – not from the small bribes passed on to petty officials to speed up a license.

The March plenary session of the National People’s Congress was supposed to severely curb the number of ministries and the profits SOEs could keep as their own. There was some progress, but far from enough. Many ministries managed to hold their ground and defended their survival as independent institutions. Meanwhile many SOEs managed to retain their profits and monopolistic powers by deterring breakups.

Both fronts of resistance give rise to systemic corruption. SOEs have billions of dollars to distribute to advance their agendas. On the other hand, the ministries, divided and at odds with one another, are all too keen to accommodate SOEs’ requests. In a nutshell, SOEs are too powerful, rich, and central, while ministries are too weak and competitive between themselves and powers vested in localities.

This combination makes possible a huge waste of resources and also strong resistance to the spirit of the policies decided by the top leadership. This is the real corruption the party is talking about. The means for this corruption is to engage in formalism: using the letter of law and the rules against their spirit – and this is what Xi is addressing now. He wants to have a grasp on the spirit of rules by imposing broad, almost theological, guidance. He could do that by establishing himself as the ultimate leader for a period of time, without the burden of elderly leaders breathing down his neck.

It is still unclear whether this will work. Despite official rhetoric opposing a division of power such as is found in the West, China’s powers are even more divided than those of Western democracies. Some claim that each Politburo member represents a different constituency of interests, and they all have to be mediated and compromise with each other. In this situation, a Western-style division of power could be a simplification. Xi then has to fight these entrenched interests that each have a strong desire to maintain their power.

Xi has a chance because his predecessor, Hu Jintao, decided to retire completely, and thus blocked interference from anyone else. If Hu, the person most entitled to tinker with his successor’s policies, abstains, then nobody else is allowed to interfere – at least in theory. And at least in theory, Xi has a chance to change the power structure in China, starting by concentrating powers with himself. In practice it is impossible to thwart attempts to coordinate opposition against Xi’s leadership. Mobile phones, secretaries, and WeChats are all easy instruments to bypass party rules and discipline in order to try to withstand the change.

We shall see who will prevail, but for sure these are just the first broadsides of the battle. A first important battlefield is the announced plan to revise criteria to promote officials. These will no longer be base on strict gross domestic product performance, but on broader criteria.

In fact, GDP performance was a standard useful for a collective leadership where different officials may have had different views on whom to promote. Moreover, it stressed the need to pay attention to economic growth, of paramount importance in the past 30 years. The drawback of this system of selection is evident. Brighter and more concerned officials have been brushed off in the promotion cycle in favor of more cynical ones.

Moreover, GDP performance prizes short-term results and punishes long-term investment. Now just the opposite is necessary. Besides, fast economic growth by all means is no longer too relevant, and a more empowered leader will want to decide whom to promote on broader considerations, which may be more “arbitrary” than GDP results and more relevant for the future of the country and the world. DM

Photo: China’s President Xi Jinping gives a speech during a joint declaration ceremony with his South Korean counterpart Park Geun-Hye (not pictured) at the Great Hall of the People in Beijing June 27, 2013. China’s president welcomed his South Korean counterpart on Thursday as an “old friend of China” and agreed to make a push for new talks with North Korea on Thursday as two of Asia’s newest leaders met for the first time. REUTERS/ Wang Zhao/Pool