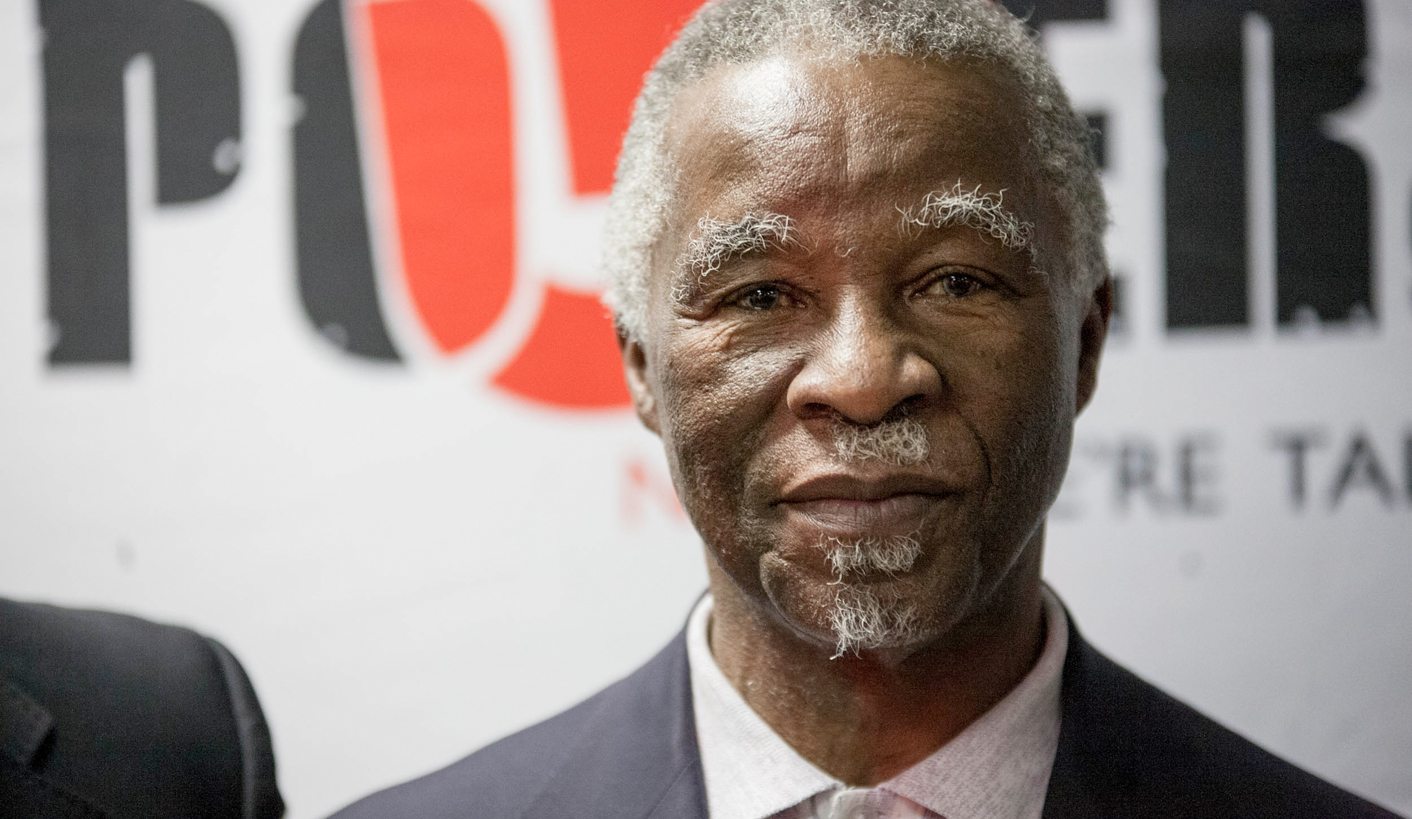 In a wide-ranging interview on Thursday night, former president Thabo Mbeki admitted he could have done a better job at communicating his position on HIV and Aids. It wasn’t an admission of failure – nutrition is very important, he said – but it shows some sanity has returned to his view on the issue. Unlike his speech last year effectively questioning President Jacob Zuma’s leadership, Mbeki was careful to dance between straight talk and criticism of the ANC. By GREG NICOLSON.

Mbeki arrived at Power FM’s Houghton headquarters shortly before his 21:00 interview with host Tim Modise and quickly settled in. He sat his tiny frame in the studio, legs dangling from the chair, and started with comfortable questions relating to the African Renaissance before tackling a few of the tougher issues. He wore a large ring on his right ring finger (“I think he got it in Sudan,” said one of his handlers).

Interviewing Mbeki, who rarely responds to media requests, was a coup for Power FM in only its third day on air. The focus on the former president, however, doesn’t come as a surprise. The station launched on 18 June, Mbeki’s birthday, and is a black-owned, managed and controlled business. CEO Given Mkhari interviewed Mbeki during his career on radio and when he left his extremely popular show on Metro FM in 2005, Mbeki, president at the time, called in to thank Mkhari for the good times. The former president seems just as taken with the new venture, telling listeners to tune into Power if they want the truth.

Always known for retreating into his books and working in the background, Mbeki has immersed himself in issues of internationalism and achieving peace in Africa since being recalled as president. He generally stays away from government and ANC events: he attended the ANC’s centenary celebrations in January 2012 but skipped a lecture by President Zuma in his honour last November.

In the lead-up to that event and only months away from the party’s national elective conference, Mbeki broke his silence to comment on the state of the nation. Delivering a lecture in honour of Oliver Tambo, he said he was “deeply troubled by a feeling of great unease that our beloved Motherland is losing its sense of direction, and that we are allowing ourselves to progress towards a costly disaster of a protracted and endemic general crisis”. Despite pleas to media to take the lengthy speech as a whole, his misgivings made for perfect quotes on the state of the nation.

“My feeling of unease is also informed by what I sense is a pervasive understanding throughout the nation that there is no certainty about our future with regard to any of our known challenges and therefore the future of the nation,” the former president told the audience at the University of Fort Hare. “In this context I am convinced that it would be treacherous to hide our heads in the sand and behave as though we remain on course in terms of the achievement of our shared and various national objectives.” It was the kind of analysis that has been missing from South African politics since Mbeki’s departure and featured the reflection which led author Allister Sparks to call him “one of the sharpest and brightest analysts” he had met.

His comments came as South Africa was taking an international bashing after the Marikana massacre and strife across the mining industry. Cosatu’s Sidumo Dlamini took issue with the negative tone and ANC Secretary General Gwede Mantashe said Mbeki was focusing on “old problems” but if he wants to believe the country lacks direction “it is up to him”.

The ANC took a different tack this week on Mbeki’s 71st birthday. Zuma sent birthday wishes and thanked Mbeki for his contribution to the “liberation and the creation of a united, democratic, non-racial, non-sexist and prosperous South Africa, a better Africa and an equitable world order”. The ANC sent “revolutionary greetings” to “this distinguished son of the ANC” while thanking him for his role in fighting poverty and his ongoing efforts to establishing positive leadership on the continent.

During his hour and a half interview on Power FM on Thursday night, Mbeki was reflective but cautious not to cast doubt on Zuma’s leadership. In a wide-ranging discussion with Modise and callers, the former president shared his views on South Africa and the continent’s relationship with China and the rest of the world, divisions in SA, his upbringing, who he finds inspirational, Nelson Mandela (he assures us his Madiba’s condition is improving), unemployment, economic growth, and what he is reading (Dancing in the Glory of Monsters was the first of three books he listed).

“I really don’t want to insert myself into the current partisan politics of this country,” he remarked, tapping his fingers on the desk. He didn’t criticise the current government but said the public needed to hold leaders to account and many of the systems established to transform the country had not worked well enough. One concern to watch out for was “the troubling resurgence of tribalism”, he said.

When asked about the HIV/Aids crisis which spiralled out of control under his presidency as he continued to fight activists and scientists on the cause of Aids and the provision of treatment, Mbeki clarified his stance and somewhat admitted his failure on the matter. Immune deficiencies can be created by a number of factors, including “persistent malnutrition”, and they need to be addressed along with HIV, he said. “Perhaps we could have presented the matter in a different way,” he added, responding to claims that he is an Aids denialist.

The idea that things could have gone better ran through many of his comments. Despite the economic growth achieved under his administration, poverty and unemployment persisted at high levels. Insufficient investment hampered growth while skills shortages meant many South Africans aren’t qualified for work, said Mbeki, adding that he regrets the slow progress in addressing unemployment. “We did not move fast enough to achieve the eradication of poverty.”

He was quick to add that hundreds of years of colonialism and Apartheid cannot be undone overnight. The reference wasn’t aimed at deflecting criticism but conveying the reality of the entrenched power relations and social problems wrought by the country’s past. South Africans and the government must still take accountability for the situation and transformation has not been sufficient, he remarked.

Once the interview was over, Mbeki posed for photos with Mkhari and the Power staff. “Always tell the truth,” he wrote on the radio station’s message board. One imagines that Mbeki might have been holding his tongue on where he thinks the country is going under Zuma and he was not asked about controversies like the Arms Deal, Zimbabwe, or the Jackie Selebi case.

Insightful, reasonably frank, and sometimes lighthearted, it’s unlikely his comments will draw a reaction similar to the October speech. He managed to leave without infuriating Zuma’s ANC. Meanwhile, Power FM proved it can pull the highest-profile interviews. DM

Centre for Analytics and Behavioural Change • 30 mins ago