Fixing China’s image, one African student at a time 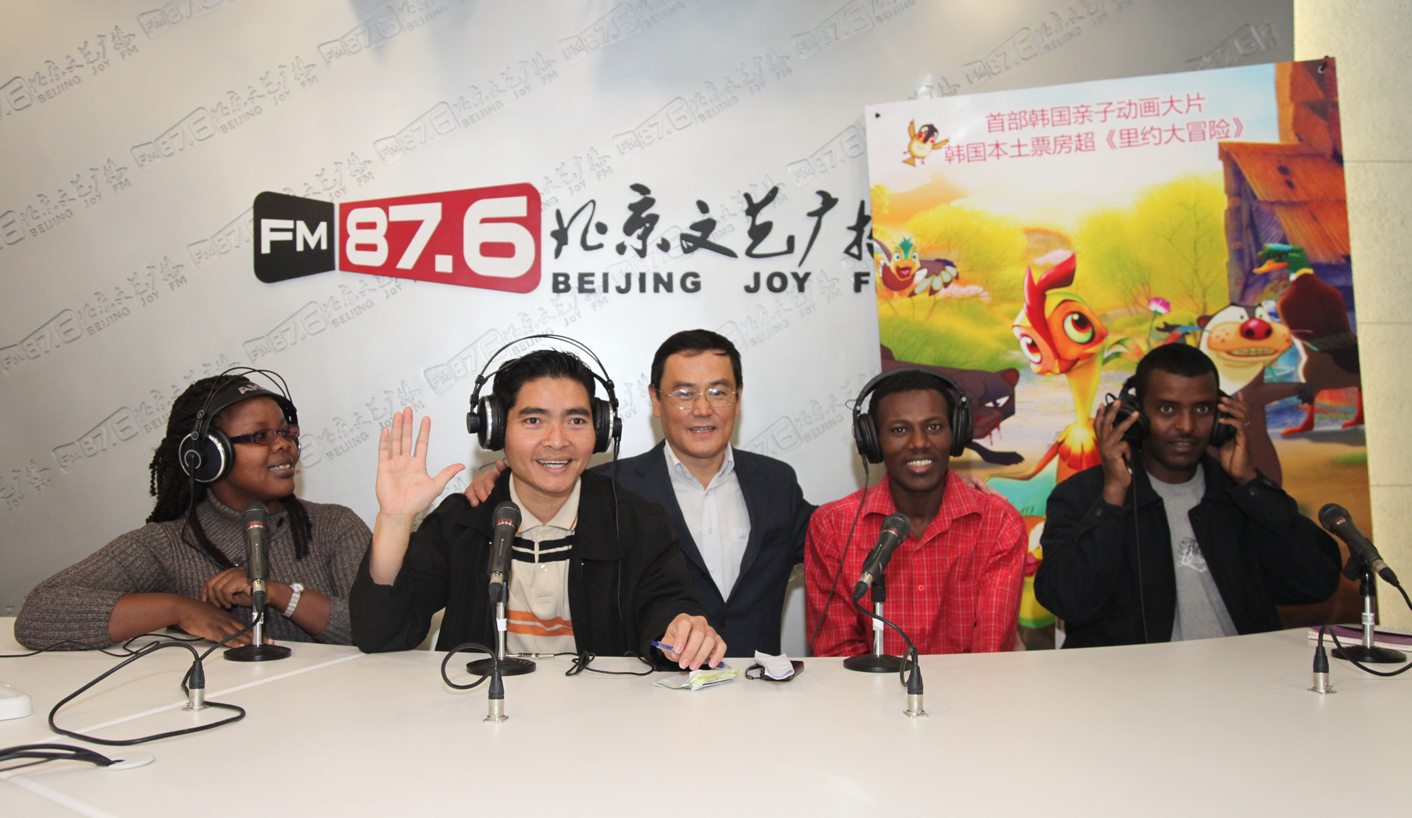 Thousands of Africa’s best and best-connected students have been lured to Chinese universities with free degrees, luxurious accommodation and generous monthly allowances. Thousands more will follow in what is an immense and sustained attempt to repair China’s reputation and expand its sphere of influence. In a Daily Maverick special feature, SIMON ALLISON goes to Beijing to examine the scholarship programme first-hand – and figure out if it’s going to work.

In Africa, China has an image problem. You’ve read the headlines: China is flooding our markets with cheap fakes; it is callously poaching our rhinos; it is building stadiums and roads that don’t last a decade; it is undercutting our labour; it is stealing our diamonds; it is coming to colonise us all over again.

Some of this is sometimes true. Much of it is not, or not completely, the product of nervous imaginations and a well-founded fear of foreign nations who take from Africa more than they give. But image is not about substance, it is about perception; and, after decades of doing things its own way – consequences be damned – China is wising up to the importance of fixing its controversial image in Africa.

A few initiatives are worth noting. The expansion of Chinese media into Africa can’t be ignored. State news agency Xinhua has become the largest wire service operating in Africa, while the Chinese public broadcaster’s new Africa channel (CCTV Africa) is headquartered in Nairobi with a full complement of African staff. Likewise, there has been a significant cultural investment in the form of Confucius Institutes (cultural and language centres designed to rival the British Council or Alliance Française) sprouting all over the continent.

In the long term, however, perhaps the most influential and certainly least examined initiative is the Chinese government’s mammoth scholarship programme, which has grown exponentially over the last decade. There are an estimated 12,000 African students studying right now in China with the support of the Chinese government. This is an astonishingly high figure, dwarfing scholarship programmes offered to African students by any other country.

So, questions need to be asked: What are African students doing there? How are they being treated in China? And who really benefits?

Coming in from the cold

To figure this out, I thought I’d better ask a few African students who are actually there.

Sydwell Mabasa welcomes me into his room at the Communication University of China. He’s clearly happy to see a fellow South African, and over a hot cup of Rooibos – “The taste of home,” says Mabasa – we chat about politics and Oscar Pistorius and why exactly those textbooks aren’t being delivered in Limpopo, his home province. I’m just happy to be inside. Beijing in winter is cold and blustery, the air so thick with smog that you can scrape trails of grime off your face with a fingernail. This is about as far from the warm, blue skies of Africa as it is possible to get.

Mabasa, who works in provincial government at home, is one of 21 African students on a new master’s programme in international communication (almost all the scholarships are awarded at post-graduate level; the idea is to get people who are already well-educated and established in their home countries). He hasn’t contributed a cent to his postgraduate studies, because China is footing the bill. The course is paid for, as are flights, accommodation, food and even a monthly stipend of $250 (R2500). Not too shabby. Neither is his room, a spacious studio with two single beds, a desk, a couple of chairs and an en-suite bathroom (on some mornings, students are even woken up with tea delivered to their door). It’s housed in the 10-storey International Students Centre, a former hotel on campus where all the foreigners stay. “To prevent them infecting the citizenry with their foreign liberal ideas,” jokes a colleague.

It’s a flippant remark, but it’s a serious issue: what kind of education can Africans really get in China, a country where censorship is rife and Facebook and Twitter are still banned? “The education system is good,” Mabasa says. “Most professors who are part of this programme, they studied in the US and Canada and other areas. We get to explore both sides of the world.”

His sentiments were supported by other students I spoke to, all of whom noted that the course presented both Western and Chinese theories, allowing the students to choose what they think works best. “There is a kind of framing sometimes, trying to push you into viewing the world in a certain light,” said Saleh Yussuf Mnemo, from Tanzania. He’s a journalist with experience at the state-owned Zanzibar Broadcasting Corporation, and also a lecturer at the Zanzibar Journalism and Mass Media College. Saleh says this “framing” is not unique to the Chinese: “Our education in East Africa was mostly influenced by the British, the French, the Germans. Now we are here we get a real insight into what the Chinese perspective is.”

For many of the students, understanding China is just as important as the education itself. There seems to be a recognition among young Africans that China is going to be around for a while, and that there are relatively few Africans who can relate to China at all. Europe and America are known entities, with deep cultural or historical ties to African societies, but China is still a mystery. To understand China – to be a China expert – is therefore a marketable skill which is valuable regardless of the content or quality of the degree.

This is encouraged by the university, which includes Chinese language, culture and history courses as part of the core programme. “It’s kind of a life-changing experience for them,” comments Professor Zhang Yanqiu, director of the African Communications Research Centre at CUC. She’s also the resident coordinator for the African students in the communications programme, and helps organise trips and cultural experiences – excursions to Shanghai or the Great Wall, for example, or tours of Chinese broadcasters. “They know more about China. Now they know it, they know China personally.”

Yanqiu, however, is the first to admit that there’s an element of self-interest in this as far as China is concerned. “Between China and Africa they do a lot of business and there is a lot of misunderstanding and misinterpretation of each other. But this programme offers a new channel for Africans to know what’s happening in the real China… For us, it’s a successful programme. The students work like a bridge between the two countries. I think we achieved our goal to let people understand China more, to know the real China.”

But the real China is flawed, and it can, at times, get in the way of the education. I went with the students to a lecture on new media, a fascinating topic in today’s digital world. The lecture, in English, was sharp, and the discussion freewheeled between analysing the influence on public opinion of US political dramas like West Wing to the skills needed in crafting 140-character tweets. Except they weren’t tweets, of course, because Twitter is banned; they were entries on China’s heavily censored home-grown equivalent, Sina Weibo. Homework for the students, along with an impressive amount of reading, was to set up a Weibo account and start micro-blogging.

Photo: Soldiers guard the main entrance at the University of Peking (Simon Allison)

Easier said than done. “Whatever I say, they delete most of it,” said one student, referring to the army of censors working in real-time to monitor the social network. Mabasa refers to the restrictions as “social networking with Chinese characteristics”, a clever riff on the “socialism with Chinese characteristics” that forms the basis of the Chinese state’s ideology.

Not that Twitter and Facebook are completely off-limits. Getting round the censors by using a proxy server is slow, but not difficult. I was able to access my Twitter via a simple Google search for “free proxy server”, and students have even more sophisticated ways to evade the Great Firewall. Even some lecturers – employed by the state – have no qualms about telling foreign journalists like me to connect with them on Facebook.

Still, teaching a course on new media when the most influential new media sites – including Facebook, Twitter, YouTube, and WordPress – are technically off-limits necessarily compromises the course. As does teaching classes in international journalism when media in China is similarly controlled and driven by the central government, and international news heavily restricted (the New York Times, for example, is unavailable in China).

When put to her, Professor Zhang accepts this criticism, but is quick to point out that the West has its own, different problems when it comes to the media. “We can see that Western media reports on China and developing countries are not very balanced. For both the teacher and the student we need to balance the coverage. I think the developing countries are in one camp, they are not in the camp for Western countries, so we should understand each other, pay attention to each other, produce coverage on each other and keep the information flow very balanced. Although it’s hard to achieve, we have to help each other.”

This is a refrain I hear again and again from Chinese academics and government officials: China and African countries are in the third world together, they are all countries discriminated against by the West; they are brothers or partners or whatever other word describes a friendly, mutually beneficial partnership between two regions of equal stature and development.

Walking around Beijing, it’s hard to buy this narrative. The city is modern, clean and efficient, with world-class public transport. The sheer number of glistening skyscrapers here is overwhelming, more than in the whole of sub-Saharan Africa combined, and they’ve all got electricity and running water. There is a conspicuous absence of the kind of obvious poverty that blights most African cities. Even the smog points to an industrial capacity that Africa can only dream of. Sure, this is just one city, but China’s got plenty of other developed, industrialised metropolises: Shanghai, Shenzen, Guangzhou, Chengdu, Chongqing, to name but a few. Africa, as continent, has a lot of catching up to do.

“When I came here, actually it’s quite different from home,” says Saleh. “China has gone very far ahead. My expectation is that Chinese themselves can feel like maybe they are in heaven.” Heaven might be stretching it, but the point remains: China and Africa are, quite conspicuously, not at the same level of development, no matter how often African and Chinese leaders express their fraternal solidarity.

This cognitive dissonance between the image projected by China in Africa and the reality experienced by students can generate feelings of wariness and caution. Gloria Magambo, who is a manager in the performing arts section of the National University of Rwanda (which is state-run, naturally. There is a theme here), found that her perceptions of China changed dramatically when she arrived in Beijing. “Before I came here, I didn’t know much about China and didn’t even fear China at all and didn’t even care. But now when I know China and actually get to discover who they are and what they are doing that is when my fear is rising instead. Now I know more about China. I have discovered the strength of the Chinese, they are very determined people, and by studying their history I know that whatever Chinese want they can get it… People with such determination, if their inner motive is colonisation, we’re in trouble, we cannot beat them.”