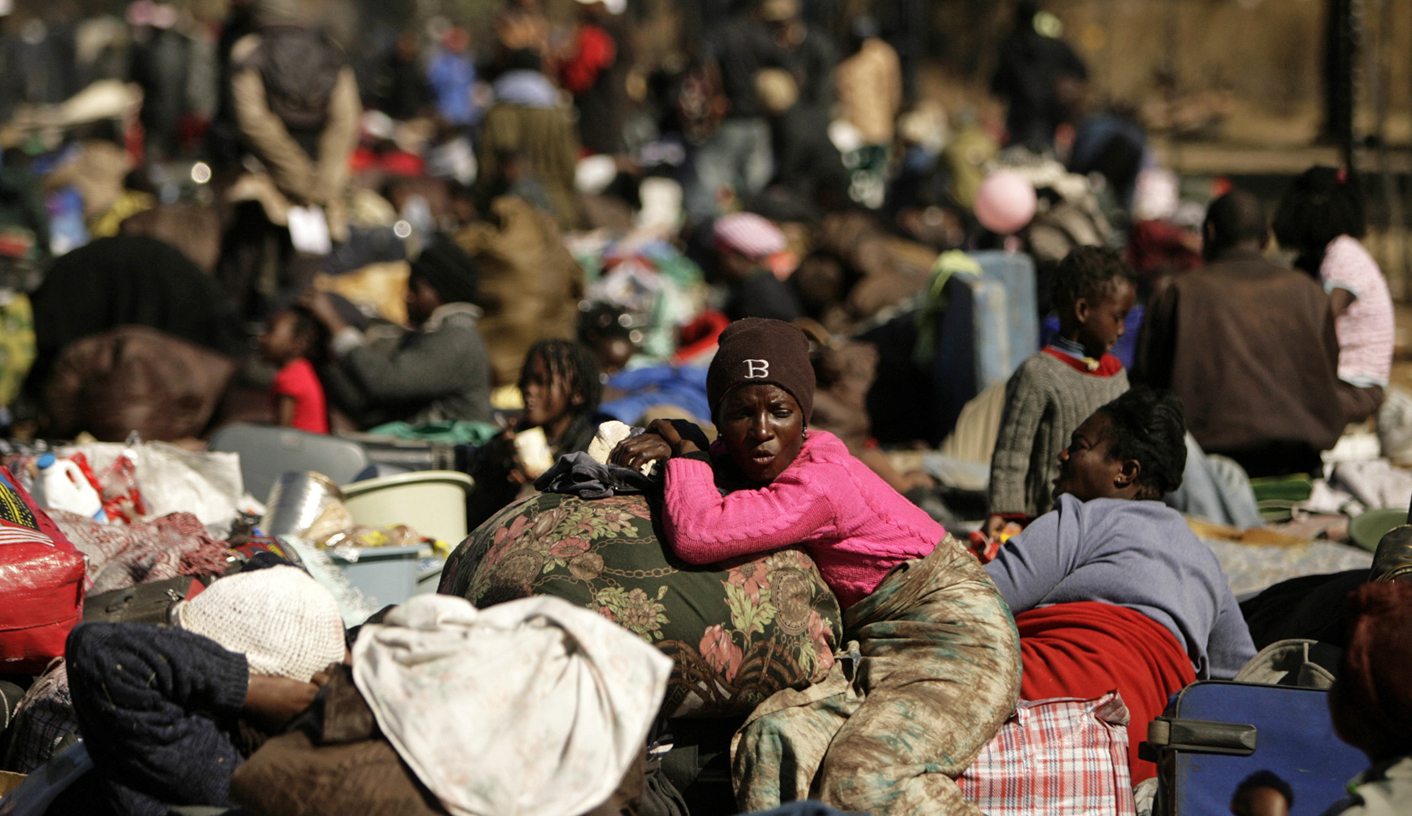 On Monday night, foreign-owned stores in Diepsloot were once again looted. Police were deployed to halt the attacks, but fears remain of a further spike in violence against foreign nationals in South Africa. KHADIJA PATEL parsed through some of the literature on the rise of xenophobia in South Africa to place the current surge of violence in context.

Most dictionaries agree on a definition of “xenophobia” as a “hatred or fear of foreigners”, combining the Greek xenos (foreign) with phobos (fear). In South Africa, we’ve come to understand it as the often violent dislike of foreigners, the “makwerekwere”.

Unfortunately, violence is not restricted to the so-called xenophobic hotspots, where localised competition for political and economic power is a trigger for violence. It is not unique to Diepsloot or Sebokeng. The vast majority of South Africans may not be driving out Somalis from their neighbourhoods, but xenophobic attitudes are more pervasive than many are ready to admit.

In May 2008, tens of thousands of migrants were displaced, amid mass looting and destruction of foreign-owned homes, property and businesses across the country. Xenophobia became a buzzword, traded over glib repartee in elegant conversation with the same frequency it peppered government statements expressing shock and outrage at the incidence of violence against foreigners. And while the scale of that spate of violence has not yet been repeated in a single campaign of violence since, attacks on foreign nationals have continued anyway. The violence usually comes in the form of high-profile mob attacks, like those we’ve witnessed in Sebokeng and Diepsloot in the last week.

According to the Consortium for Refugees and Migrants in SA, attacks on foreigners have continued, with national statistics showing that, in 2011, one person a week, on average, was killed, while 100 were seriously injured and over 1,000 were displaced.

Crucially, it was found that foreigners were particularly targeted during service delivery protests. Scalabrini Centre outreach manager Sergio Carciotto told the Cape Times last week that about 200 foreigners had been killed in South Africa last year through common crime and xenophobic violence.

And as xenophobic violence continues to grip the country, we’ve come to attribute the causes of the violence to various historical, social and economic factors. One of the most frequently cited explanations of the incidence of xenophobia in South Africa is Apartheid – the discriminatory attitudes learned during Apartheid have not yet left us, not by a long shot.

Another explanation of the violence is based on criticism of the ANC government’s service delivery record – what Apartheid didn’t mess up, the ANC did.

South African xenophobia has also been explained by the rate of socio-economic inequality in the country. Not for nothing has it been pointed out that the greatest scourge of xenophobic violence has been perpetrated in margins of formal society, where foreign nationals compete with the poorest South Africans to eke out a menial living.

And then finally, the country’s immigration policies are also blamed for aggravating the problem.

Academics warn that while the discriminatory attitudes, poor policy and socio-economic pressures are definitely precursors to xenophobic violence, they do not sufficiently explain when and how xenophobic violence is used in communities like Diepsloot and Sebokeng.

“First, there is a lack of trusted and effective conflict resolution mechanisms within these locations.

“Second, there is a culture of impunity that makes people who attack foreign nationals feel that there will be no negative consequences for them.

“Finally, there is a political vacuum or competition for community leadership so that unofficial, illegitimate and often violent forms of leadership emerge. Such leaders then mobilise residents of the area against foreign nationals in order to strengthen their own power base.”

The authors also say, “Mirroring the three key triggers above…interventions could include strengthening local conflict resolution mechanisms such as conflicts over scarce resources, maintaining respect for the rule of law and reducing vigilantism by effectively and publically prosecuting perpetrators, and supporting and monitoring accountable local leadership.”

They note as well that while President Zuma’s administration has not failed in recognising the fault lines, addressing xenophobia will not miraculously erase underlying structural faults. A failure to address xenophobia, however, only serves to further entrench these faults.

In South Africa, foreigners, especially black foreigners, have come to be perceived as a direct threat to the future economic health of the country. They are seen to be sponging off public services while diligently chipping away at the economy for their own selfish survival. There is a belief that the socioeconomic burden created by the influx of African migrants is unsustainable.

And while xenophobia is a destructive and reactionary force wherever it is found – in France, in Indonesia and in India as in South Africa, the 2006 Xenophobia Survey found the extent of xenophobic attitudes to be particularly excessive. But before one section of South African society assumes a sense of superiority over the other, the survey also found xenophobic attitudes to be stronger amongst whites than blacks and stronger amongst the poor and working class and the wealthy than the middle class.

The xenophobic violence of 2008 did not come out of nowhere. Nor did the current wave of attacks on foreign-owned businesses – in May 2009, local businesspeople sent letters to Somali traders in Khayelitsha threatening them if they did not move out of the area within a week.

As the 2006 Survey confirmed, xenophobia and hostility to (particularly) other Africans is not the preserve of a lunatic fringe. Xenophobic violence stems from the xenophobic convictions of the majority of South Africans.

The ongoing attacks of foreign-owned businesses around Johannesburg in the last week have shown that xenophobic violence, even a repetition of May 2008, is almost inevitable without the implementation of policies that adequately address the xenophobia in all its ugly complexity. DM