Analysis: After NPA’s epic loss, Glynnis Breytenbach must return to ALL her cases 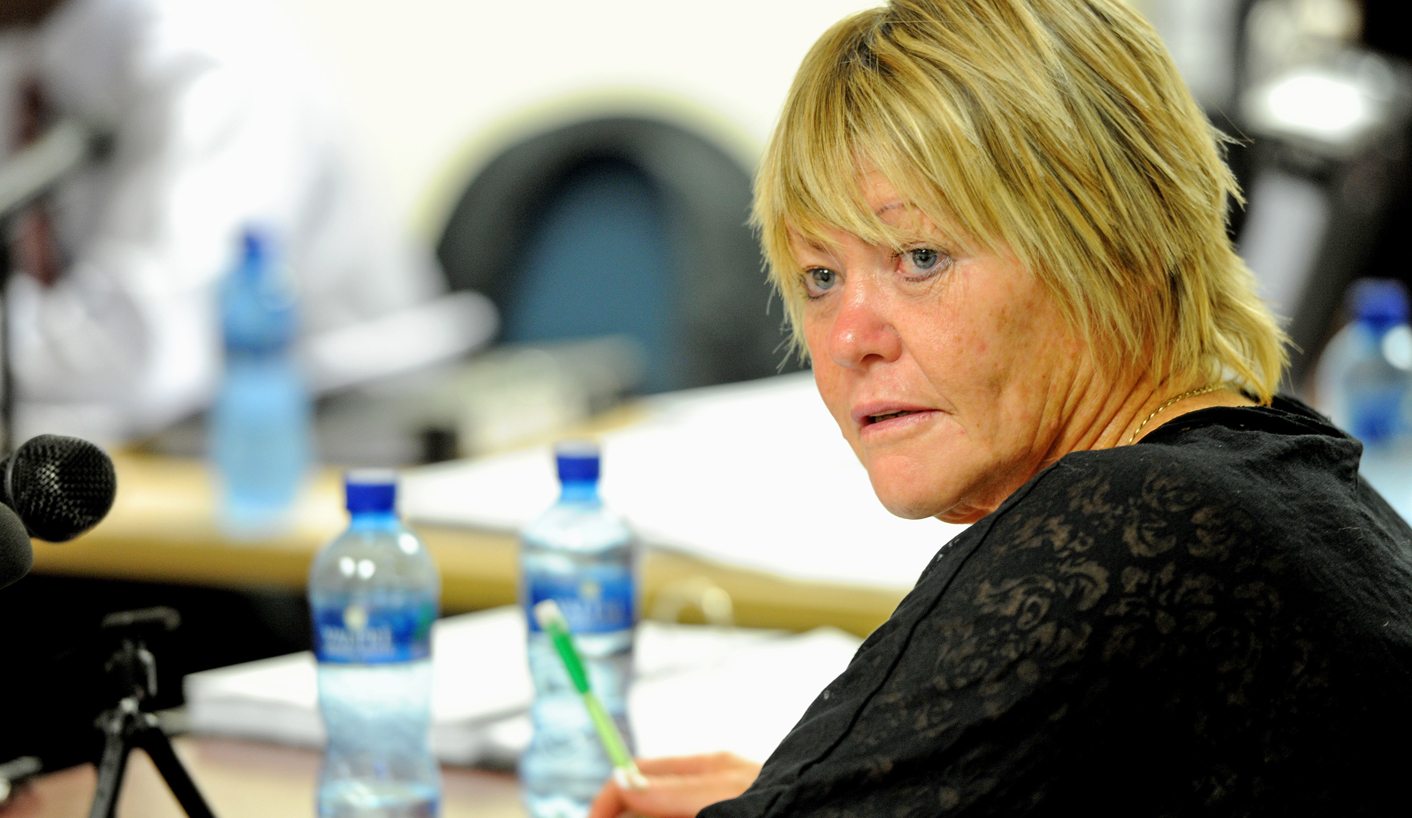 The reputation of the criminal justice system is in tatters following the repeated failures of the NPA in high-profile matters and prosecutor Glynnis Breytenbach’s suggestions of abuse of power and political interference. On Monday Breytenbach was cleared of all disciplinary charges brought against her by her employer, the NPA. Furthermore, it was ruled she had been victimised and her constitutionally-enshrined right to privacy violated during the official investigation of the complaint against her. For justice to be seen to be done, however, the NPA now faces a test it dare not fail if it is to begin restoring its credibility and integrity: it must allow her to continue with all of her cases. By MANDY WIENER.

As advocate Selby Mbenenge handed down his ruling in prosecutor Glynnis Breytenbach’s official disciplinary inquiry yesterday, her colleagues in the VGM building watched the score tick over on Twitter from GB 1 – NPA 0 all the way to GB 15 – NPA 0, the final score.

It was a whitewash, a love game, in a year long clash which has seen no love lost between employer and employee. Mbenenge delivered the death blow, “In all these circumstances, the guilt of the employee on this plethora of charges has not been proven” and prosecutors fist-pumped the air in delight. Some had even snuck into the passage alongside the room where the judgment was being delivered, to eavesdrop on the verdict and hear it for themselves. For many at the National Prosecuting Authority, this decision was as much about them as it was about Breytenbach.

Her legal team put it most succinctly and appropriately in the very first paragraph of its final heads of argument to Mbenenge:

This is not an ordinary disciplinary enquiry. It does not merely concern the relationship between employer and employee. It concerns a conflict between a prosecutor who has acted with integrity and courage in the performance of her functions without fear, favour or prejudice, and some of her superiors bent on subverting the rule of law by protecting a senior police officer from prosecution. It thus does not merely concern Ms Breytenbach’s right to be vindicated. It also concerns the public interest in the vindication of the rule of law.

The case of Glynnis Breytenbach is famously complex and over the year that I spent reporting on it, I dubbed it #SAsMostComplicatedStoryYouShouldCareAbout. In short, Breytenbach, the regional head of the Specialised Commercial Crimes Unit (SCCU), was accused of showing bias towards Kumba Iron Ore in the Sishen mining rights case in Kimberley. It was an ugly mining brawl involving a politically connected mining house, clandestine tape recordings, private investigators and forged documents.

She was suspended on the basis of a complaint laid against her by the Gupta/Zuma associated Imperial Crown Trading, the accused in the matter. But Breytenbach, a feisty and abrasive customer, believed the acting head of the NPA, Nomgcobo Jiba, and the national head of the SCCU, Lawrence Mrwebi, were merely using that complaint as an excuse to get her out the way so she wouldn’t pursue the prosecution of their friend, former Crime Intelligence head Richard Mdluli. The trio have a long history and debts were being called in.

According to Breytenbach, there was gross abuse of power in pursuit of political interests and an undermining of the very principle that underpins prosecutorial independence – to prosecute without fear, favour or prejudice. She reckoned she was being hit by trumped up charges to keep her out the way and it looked bad.

While Mbenenge didn’t make a direct finding on Breytenbach’s claim that she was suspended because of her handling of the Mdluli case, his outright dismissal of the NPA’s entire case against her is telling. He also found that Breytenbach had been victimised and her constitutionally-enshrined right to privacy was violated during the official investigation into the complaint against her. This lends credence to the allegation that a case was concocted against her and the spotlight must now fall on the leadership – or lack thereof – at the NPA. Jiba and Mrwebi must explain whether the rule of law was indeed subverted and for what cause.

This latest blow to the NPA could not have come at a worse time. Last week the Council for the Advancement of the South African Constitution (Casac) issued a statement saying the organisation’s credibility “lies in tatters in the wake of a spate of seemingly botched cases” including those of Anene Booysen, Andries Tatane and J Arthur Brown. Chairperson Sipho Pityana pointed to the Breytenbach case as an illustration of the bleak picture of the NPA which “suggests a toxic mixture of undue political influence and the incompetence of prosecutors”. The NPA responded with a statement of its own, insisting it was not in crisis as claimed. “Our track record on high convictions speaks for itself, and more interventions are in place to take this performance to even higher levels. This is [not] something remotely close to what could be regarded as a crisis. Suggestions that there is low morale at the NPA are devoid of any truth. They are but empty claims intended to create consternation.”

The NPA’s communication strategists can issue statements every day insisting all is well in Silverton and they can endlessly engage journalists on social media debating the merits of CASAC’s verbiage – but this does not win over public opinion. It is what plays out in the country’s courtrooms that wins confidence. Repeated failures by the NPA in high-profile matters and Breytenbach’s suggestions of abuse of power and political interference have badly dented opinions of the country’s criminal justice system. The faith of the people is in doubt and as Lord Chief Justice Gordon Hewart said from the King’s Bench in Rex v. Sussex Justices ex parte McCarthy in 1924, “Not only must justice be done; it must also be seen to be done.” It is a firm precedent in law that the mere appearance of bias is sufficient to overturn a decision.

Mike Hellens SC is a silk with decades of experience in the criminal field. He was central to the complaint laid against Breytenbach. Hellens acted for Kumba in the ICT/Sishen matter and the two were accused of having an improper relationship. He reacted to yesterday’s judgment by calling it a vindication, but more importantly, he believes it is a watershed for the rule of law. “I would hope that the judgment in this matter would be the turning point and the beginning of the restoration on behalf of the public in confidence in the objectivity of the criminal justice system and the National Prosecuting Authority. Putting it differently, had it gone the other way and permanently remained so, it would have been a very, very sad day for the public’s expectation of objective justice at the hands of the National Prosecuting Authority,” says the man who likes to refer to himself as “Murdoch”.

While the NPA battles to reclaim its reputation, Breytenbach’s victory shows us that there are still dedicated, determined prosecutors in the trenches, pursuing justice. They are in the courtrooms demonstrating how justice can be seen to be done and are among those who would have punched the air in satisfaction yesterday. They are chipping away at cases every day, sacrificing of themselves at great cost.

In the hours after the ruling, as Breytenbach enjoyed a glass of champagne with her legal team and answered an endless stream of calls of congratulation from legal luminaries, one of her colleagues sent me this message:

There are many people in our country who are unfairly treated by their employers, and that is always an injustice. But when a prosecutor is unfairly treated because she was doing her job and doing it well, fighting to uphold justice and the very integrity of the prosecutorial service itself, then it is the kind of case that impacts on everyone.

Glynnis’s fearless response to the campaign against her showed us that inside the NPA you still find brave women and men with the strength of character and resources and bloody-minded resilience, to fight crime, and to do so effectively. It gives us hope knowing that there are still people who fight the good fight against corruption, and win. I will sleep safer tonight knowing that we haven’t lost her as a prosecutor.

Glynnis Breytenbach wants to return to her post and continue with all of her cases. And by all, she means all. She says she wants to continue to prosecute without fear, favour or prejudice – if she is allowed to. If the NPA does allow that to happen, it will ensure that justice is being seen to be done. DM

Wiener is an Eyewitness News reporter. She has been following Glynnis Breytenbach’s case since she was suspended last year and she is currently writing a book about the last legitimately appointed head of the NPA, advocate Vusi Pikoli, which is due out in October.