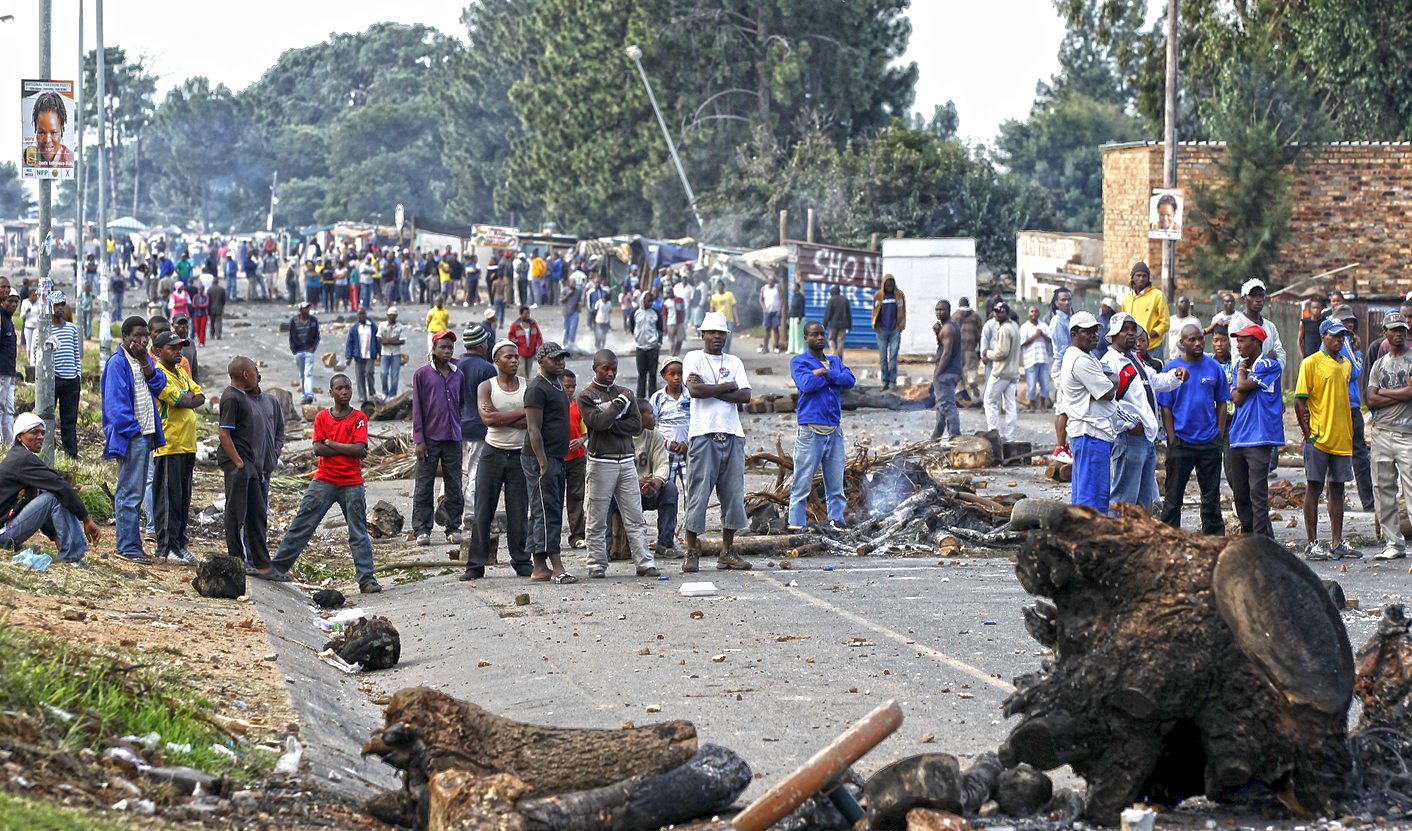 This week, Gauteng Commissioner of Police Mzwandile Petros announced that 560 protests had taken place in Gauteng between 1 April and 10 May this year. Petros warned that his charges did not have the resources to adequately police these protests. State Security Minister Siyabonga Cwele has also been talking about the issue in Parliament – he’s vowed to stamp out the incidence of violent protest. By KHADIJA PATEL.

South Africa’s reputation as the “protest capital” of the world has come into sharp focus this week. The Gauteng police commissioner Mzwandile Petros shocked many people on Monday when he said that there had been 560 protests in the province within a period of 40 days – and 40 of those protests were deemed “violent” by police. By any standard, these numbers point to a very high incidence of protests in the province. And while it is unclear what exactly drove these protests – what exactly had sent people into the streets of Gauteng 560 times in 40 days – these statistics fall into the growing discourse in government around South Africa’s culture of protest, particularly violent protests.

“Let us be upfront and loudly state that in terms of our law, it is a crime to incite or participate in acts of violence during protests,” State Security Minister Siyabonga Cwele told Parliament on Tuesday. “Both the organisers and participants must take full responsibility for the consequences of such violent action, including destruction of life and property.”

He warned, “As a state we can no longer tolerate such abuse.”

Referring to President Jacob Zuma’s 2009 State of the Nation Address, Cwele said Zuma had called on the security service to restore the authority of the state.

“The whole security cluster is increasing its capacity to focus on this scourge. We now have a plan and are ready to deploy the full capacity of the democratic state to identify, prevent or arrest and swiftly prosecute those who undermine our Bill of Rights by engaging in acts of violence,” Cwele said.

He called on all South Africans to join hands with the security forces and law enforcement agencies to ensure that “these perpetrators” did not gain the upper hand against law and order.

In Gauteng, however, Petros has sought to emphasise that the rate of protest in the province is placing a strain on the resources of the SAPS, to the detriment of the SAPS’ ability to prevent crime.

“What we are saying is that ordinarily the police are supposed to be dealing with crime prevention. And you would know that the strategy of the police in Gauteng talks to the deterrence of crime through the visibility of police,” he told Daily Maverick.

“Now the police are visible when it comes to public unrest – we are not talking about the peaceful marches. You see, of the 560 protests, 40 of them were violent, meaning each and every day we are having a violent protest which presents us with a problem, because there is the challenge that the resources we would have used there, we need to use to go and beef up the capacity to stop the violent protest that is there,” he explained.

Petros stressed that the police were unable to determine if a protest was likely to turn violent.

“What happens is you deploy [police] first and you put on standby [others] because we have to anticipate that it might be violent,” he said. “So we need to be in a position in terms of calling up the people at short notice.”

Petros further explained, “For example, if there is a protest in Lenasia, we don’t know if it’s going to be peaceful or not peaceful. We first send in for a peaceful protest, but immediately [if] it turns out to be violent, on standby around Soweto there will be police officers doing crime prevention that can be called on short notice to go and beef up what is happening.”

Some analysts believe that Petros’ assertions of police resources being stretched by the rate of protest in the province are a wily attempt to secure funding from his superiors. Others caution that the police in Gauteng, as elsewhere in the country, are battling to cope with the number of protests taking place.

“The police are genuinely under pressure in terms of resources,” Professor Peter Alexander from the University of Johannesburg said.

Alexander, who is the Director of the Centre for Sociological Research, is in the process of studying the incidence of public protests in South Africa. While he is surprised at the number of protests recorded by police in the last six weeks in Gauteng, he agrees that the police are ill-equipped to facilitate adequately the right of South Africans to protest.

He points out that an overstretched police force with dwindling resources, forced to face the wrath of people who feel ignored by their government, often will have no other recourse but to use rubber bullets – and then live ammunition.

The massacre in Marikana and before that, the death of Andries Tatane in Ficksburg during a service delivery protest that turned awry, stand out as examples of a police force ill-equipped to deal with the demands of public order policing, while still facilitating the rights of people.

Petros, however, says that his charges do receive training.

“There is a training that gets given,” Petros said. “You would know that after Marikana, there was talk of [more] training. But I think if you speak to the national commissioner, she would be in a better place to talk about that…there is training that is ongoing, that gets given to those who deal with public unrest.”

Petros, for one, believes that as the elections draw nearer, the number of protests are set only to increase. And how exactly the police will rise to the challenge, or not, may prove crucial to how the next election is contested. DM

Photo: Township residents stand near barricades during protests over the lack of housing, electricity and sanitary water supplies in Zandspruit, north of Johannesburg April 26, 2011. Police used rubber bullets to disperse the crowd and 16 people were arrested for public violence, according to local media reports.  REUTERS/Siphiwe Sibeko