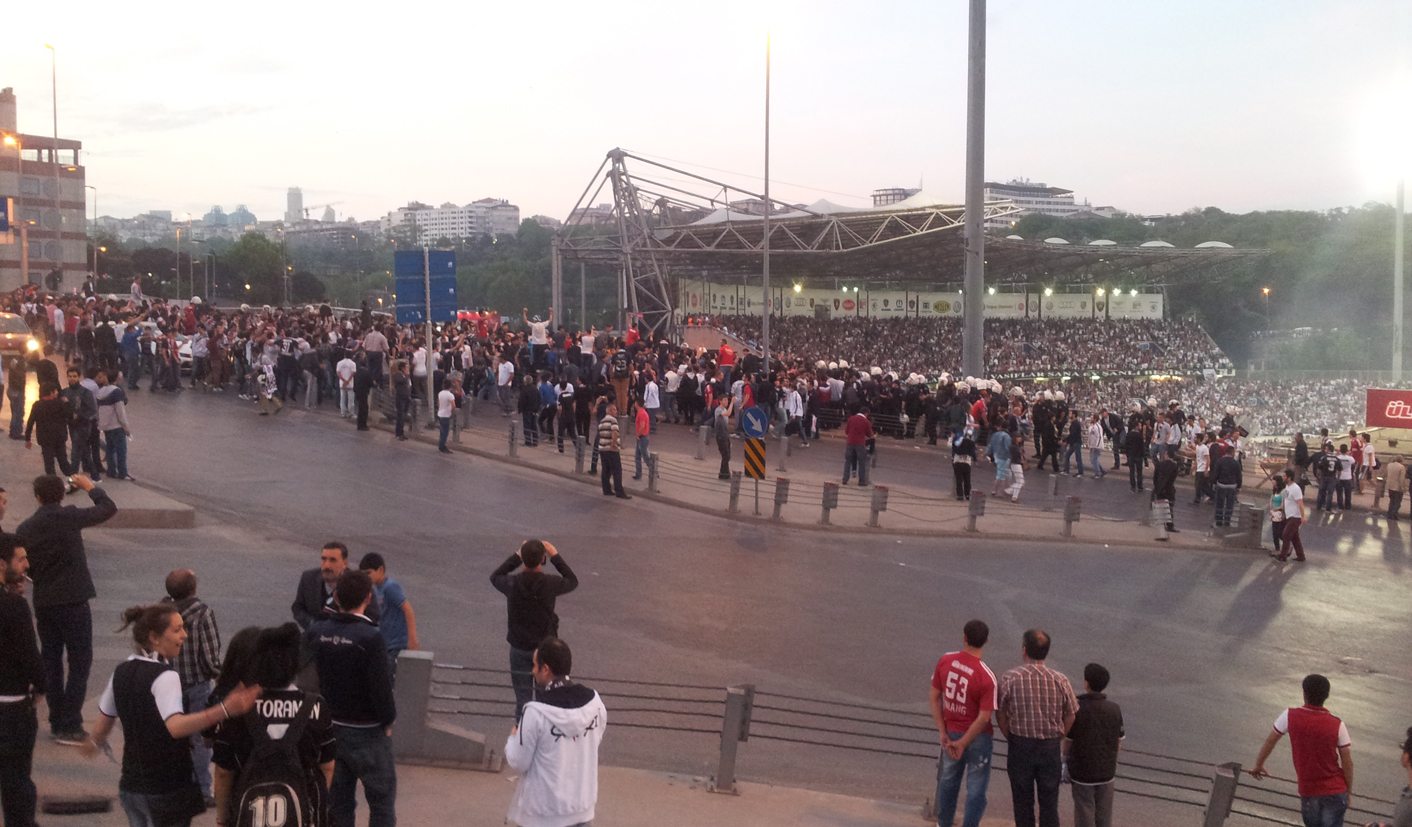 Football in Turkey is something quite extraordinary: whether it’s the presence of riot police and teargas or the atmosphere of a sold-out 32,000 seat stadium full of chanting. ANT SIMS was in Istanbul for Besiktas’ last match and got to experience it all first hand.

Whenever anybody says they’re going to watch football in Turkey, those who have heard only the bad stuff will stretch their eyes wide and typically take a deep, disapproving breath. But perhaps it’s not unlike the typical fearmongering that accompanies a visit to South Africa: the nay-sayers are only aware of the bad things. In the common perception of Turkey, fans riot (often for no reason other than losing), flares are set off and everything in the fans’ path is destroyed as they march on in rage or celebration.

The reality is a bit different. On Saturday night, Besiktas played their last game at their current stadium. The historic BJK İnönü Stadiumic stadium will be flattened and a new one will be rebuilt (just 23 meters from the current one) with the current expected completion date being October 2014. It was a pretty big occasion, and the fans went equally big.

The stadium is incredibly well-connected and well located, in the heart of the Besiktas district, and unlike in other parts of the world, those who support the side tend to hail from the district. The whole crowd immerses itself in chanting and the singing – there’s no dedicated “singing” stand. The whole stadium becomes a celebration of the team.

The game was a sell-out, and even the touts weren’t willing to haggle, refusing to budget from their 200 Lira asking price (over 100% mark-up). Their opposition, Gençlerbirliği, even went so far as to give up their allocated away seats.

From above the Eksi Açık stand, people were throwing tickets down to those below as everybody desperately tried to get inside, to soak up the atmosphere and perhaps to say: “I was there”. It didn’t take long for the cops to get wind of what was happening, though, and armed with riot shields and helmets, they marched along to disperse those who were sneaking tickets form up above.

Those who couldn’t get inside the stadium had gathered around it – wherever they could. A heavy police presence ensured that there was no way for anybody to get inside or even close to inside. The towering hill on the left side of the stadium was packed with black and white shirts, all trying to get a glimpse. The pavement-gatherers had started to spill over onto the streets, causing traffic to be jammed – a fact that the drivers accepted amazingly calmly. No honking or rage, simply waiting for soccer fans to finish their chant and move along.

Behind the stadium, across the road, lurks a sprawling grass bank – one which had filled up with families trying to soak up the atmosphere. Some had brought drinks, others had brought braais and it all seemed like a peaceful gathering of a football-mad country simply trying to enjoy the atmosphere for one last time.

As game started to flow, so did the passion and, to an extent, the taunting of police. Underneath their riot helmets lurked teargas masks, and about 10 minutes into the first half, a cop gestured to the foreigners that was probably time to get out of the way. Police then gathered their masks and headed for the now heaving corner of pavement where fans had started to set off flares.

The fans dispersed towards the grass banks with more chanting (mostly about Besiktas, sprinkled with a bit of police-taunting). The police charged again, and the fans simply shifted along while those families who were hoping to have a braai decided it was probably a good idea to pack up and leave. Most misfits had now moved along to the back of the grass bank with a few brave ones still clinging to the fence. This, by the way, was approximately 30 minutes into the game.

While it might all seem out of the ordinary, brutal and crude to an extent, most of it was simply a game of chicken. Many of the fans gathered outside were there to try and connect with a piece of history. Sure, there was taunting and gesticulating at the police, but there was no harm, no foul.  Fans taunt police and the authorities play along, a game of cat and mouse – but the mouse is there voluntarily. Fans also closed the traffic on route to the stadium, a traditional welcoming gesture to the team members that are supposed to pass by ahead of home games.

The police were immensely effective. While they were harsh and merciless and stopped for no ordinary civilians, their goal was to ensure the crowds dispersed early on and to keep potential trouble-makers away. Those inside the stadium ripped out seats, climbed the goal posts and ripped the lettering from the front of the stadium afterwards – behaviour that was probably expected, but early patrolling ensured that the chaos was kept to a minimum.

Besiktas won the match 3-0, a good result, but insignificant in the greater scheme of things – as Galatasary had clinched the title a weekend ago (which resulted in another riot). Fans invaded the pitch afterwards and the pre-match clashes came just a few days after the same two groups went head to head at the same spot ahead of May Day celebrations. In any ordinary city, it was chaos; in Istanbul, it was a way of life.

From the outside looking in, or getting caught in that kind of chaos unexpectedly, might be unnerving to some. In Turkey, it’s all part of the fun, it seems. DM