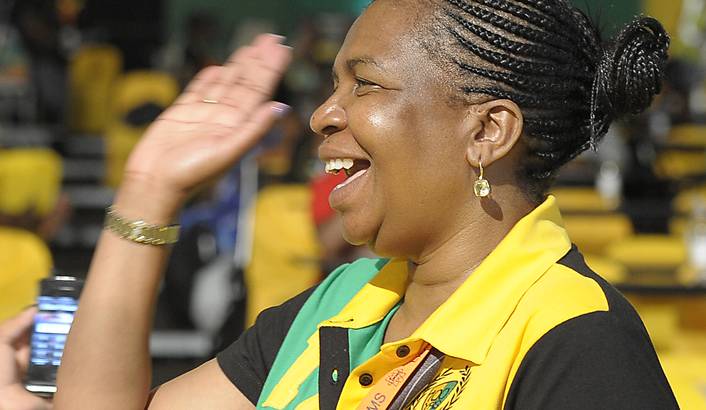 Dina Pule is being investigated by the police for alleged corruption in departmental appointments, based on an affidavit submitted by the Democratic Alliance. The minister’s boyfriend ‘engineered’ the appointments of friends to the boards of various state-owned entities, according to the Sunday Times. Should the police find evidence that this indeed happened, there will be a very strong case to answer for corruption. By SIPHO HLONGWANE.

About a month ago, the Democratic Alliance shadow minister for communications Marian Shinn asked the police to investigate allegations made in a Sunday Times story that the Dina Pule’s boyfriend was interfering in departmental process to ensure that his friends were getting onto the boards of state-owned entities. They have now formally agreed to launch an investigation, which will determine whether or not to lay charges.

According to the Sunday Times, the communications minister’s boyfriend Phosane Mnqibisa became something of a centre of power at the department, and enjoyed the right to appoint people to positions on the boards of the SABC, the SA Post Office and other SOEs.

The paper’s investigation “uncovered evidence of an internal audit showing that Mngqibisa engineered getting friends and relatives on the boards of the Post Office, Sentech, Usasa and the SABC with the full knowledge of Pule – offering decisive evidence of just how unsuited the minister is to her job.”

Not only did Mnqibisa have this powe, but he used it to appoint his friends to these positions. The DA’s affidavit states that Mngqibisa engineered getting friends and family appointed onto the boards of the Post Office, Sentech, USAASA and the SABC, including the appointment of close friend Lulama Makhobo to the post of SABC CEO, and Gugu Duda as chief financial officer.

The report was based on information from several sources, including Duda’s former business partner  Nomakhaya Malebane, who said, “I was at Gugu’s house on December 8 2011 when she was informed that Phosane was arranging a secret meeting between her and the minister. A series of meetings took place before all parties went on Christmas holidays. Phosane gave Gugu three choices: to be a CFO at either the SABC, the Post Office or Post Bank, and she chose the SABC.

After Duda’s appointment to the board, she approved a R3-million sponsorship for an ICT Indaba organised by the communications department without the approval of the rest of the board. Mnqibisa earned R6 million in management fees from the event, while hiring Makhobo’s son Lefa Chakela and Duda’s sister Dudu Moloi to do work as well.

After investigators said that Duda’s “zeal and zest in driving the ICT Indaba matter to the extent of flouting all the procedure is questionable”, the SABC suspended her.

The ICT Indaba controversy sparked investigations from the public protector and parliament’s joint committee on ethics, which are still underway.

The investigation by the police is a separate one.

“The other investigations are about probing the ICT Indaba, while this one is about the flouting of process,” Shinn said to the Daily Maverick.

The police were not approached because the minister refused to step down after calls for her head were made. “Whether she resigned or not is irrelevant. We are duty-bound to expose corruption,” she said.

Two weeks ago, Pule called a press conference where she launched a furious attack on the Sunday Times and its investigative reporters, accusing them of trying to entrap her and of being the lackeys of ‘powerful business interests’ who were looking to be awarded huge tenders by the department.

ST editor Phylicia Oppelt hit back immediately. She said, “We find it unfortunate that rather than dealing with the essence of the claims against her, she proceeds to attack the messenger of the stories. We also find it disturbing that the minister would use her office to call an ‘important’ press conference, as she did today, to launch a personal attack on both the Sunday Times and its journalists.

“The numerous articles this newspaper has written about Pule in the last year have been in the public interest, with no other motivation in mind. If the minister has any evidence to the contrary, we invite her to give this to the newspaper so we can deal with it appropriately.”

Despite protesting her innocence, the investigations into the ICT Indaba contracts and deals by parliament and the public protector, and the SAPS investigation into Mnqibisa are proof that Pule should not be communications minister. Instead of bowing out, she attacked the people exposing her.

President Jacob Zuma has been slow to pronounce or make a decision when it comes to firing a cabinet minister, and he isn’t expected to act differently in this case. But his silence and that of the African National Congress is telling. So far, Pule has not been backed by her comrades. DM