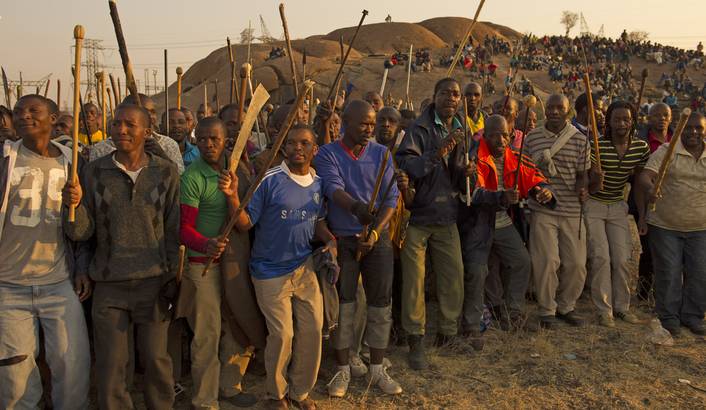 The deaths of two police officers at the hands of protesters at Marikana were laid on the hands of North West deputy police commissioner William Mpembe by his colleagues, and some of them were prepared to murder him for it. This is according to evidence heard at the Marikana Commission of Inquiry. By SIPHO HLONGWANE.

In the time that Major-General Charl Annandale has been on the stand at the Marikana Commission of Inquiry, we have learned that at least one very senior police boss warned that a tactical operation to end the wildcat strike at Lonmin’s Marikana operation last August would end in bloodshed. At the end of the cross-examination session by George Bizos SC, he read from a statement by Luitenant-Colonel Solomon Vermaak, who said that some police officers blamed Major-General William Mpembe for the deaths of two police officers on 13 August, and wanted to kill him.

The police shot and killed 34 protesters at Marikana last year following a violent wildcat strike that saw 10 people die in the days preceding the 16 August operation at Marikana. Some of the deaths were a result of a bloody clash between protesters and the police on 13 August. The cops attempted to apprehend a marching group of protesters that were carrying weapons, but were outnumbered, and eventually attacked. Warrant officers Tsietsi Hendrik Monene and Sello Lepaaku were hacked to death at the scene.

A statement by Lt-Col Joseph Merafe that was submitted to the commission shed light on the 11 August incident. He was present at the scene, and observed Mpembe’s attempts to stop the march. After the handful of police found the marching crowd, the North-West deputy commissioner told them that it was illegal to march with weapons.

Merafe’s statement continues: “When I saw that the miners were not going to listen to Maj-Gen Mpembe and lay down their weapons, I spoke to the general and informed him that we should disarm the miners and stop them continuing seeing as they were headed to the direction of the informal settlement, and were very aggressive. Maj-Gen Mpembe disagreed with me and other officers, and said that he does not want another Tatane incident, which means that he doesn’t want us to confront the people. I informed Maj-Gen Mpembe that I disagreed with him.”

Merafe was not at the point where the violence began, and couldn’t shed light on how it started exactly.

This is the incident that the police officers were referring to when they said that Mpembe ‘would lie down and die with the officers the strikers had killed’. Vermaak advised that the deputy commissioner be removed from the operational area for fear of his life, but that didn’t happen.

Bizos asked if the threats made against Mpembe made him less able to fulfil his duties.

“I had no reason to believe that he had been affected,” Annandale replied.

Vermaak’s statement supports the claim by Bizos that the Marikana operation was made to exact revenge against the killers of police officers, rather than to disarm and disperse a violent crowd. In his opening statement when the commission began, Bizos said that a police officer “has come very close to saying that he shot to kill striking mineworkers in Marikana on August 16 because they had killed two of his colleagues days earlier”.

“I will lead expert evidence according to which the police’s handling of the situation on the day, when they shot dead 34 striking miners, was unheard of all over the world… They may have been influenced by irrational statements made by senior officials of shoot to kill.”

Earlier, Bizos also argued that Mpembe was sidelined on the day of the operation because he was against it and thought it would lead to bloodshed. Though Annandale disagreed, Bizos said that the decision to send up the deputy commissioner in a private helicopter with poor communications meant that at the instance he was unaware of what was happening on the ground. (Mpembe is yet to testify.)

Vermaak has featured before at the commission. He was the man who is heard speaking over the radio, ordering the police to engage with running protesters. He orders the police entering the small koppie area to get out of their armoured trucks and engage as a protection measure, and then says: “do not shoot while they are running unless they are targeting you”.