E-tolls: Final countdown? Or not so… final… countdown? 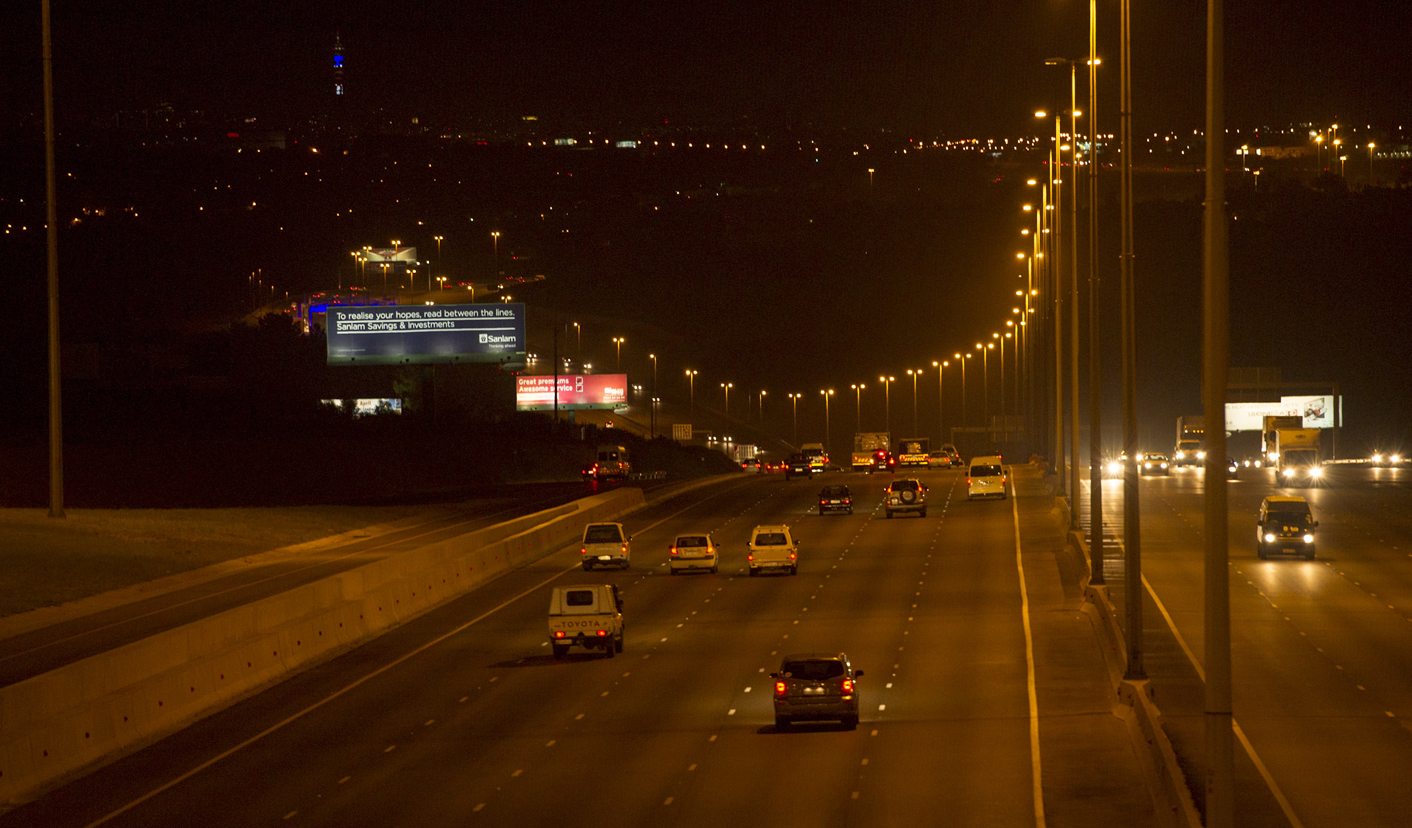 Roads agency Sanral says e-tolling will be launched before July, once a required bill is driven through Parliament. Those opposed to the controversial system are sceptical this will happen. Now, sources with intimate knowledge of the behind-the-scenes facilities have revealed a series of problems which raise serious questions about Sanral’s promises. ALEX ELISEEV examines the pressing concerns in this Daily Maverick and EWN Investigation.

Sanral says it’s ready to launch e-tolling, and could do so tomorrow if required.

It claims that it will switch on its gantries around Gauteng within weeks and has presented its own research to convince motorists that paying to use the highways won’t hit their pockets as hard as they think.

At the same time, new routes across the country are being considered for tolling while a court case over the existing one – in an effort led by the Opposition to Urban Tolling Alliance (Outa) – is around the corner.

So it’s an important time to explore some of the concerns raised by sources with a deep understanding of the system and how it works. Sanral has provided a detailed response to questions about its systems and infrastructure and claims the problems are being exaggerated.

Daily Maverick and Eyewitness News have been told that the number of motorists who will refuse to pay e-tolling bills could cripple or collapse the system, which has already been hard-hit by bad maintenance and faulty equipment.

The first issue raised involves expensive electricity generators. Sources say that, due to slow repairs of power lines, these have been run for months at a time and some are already in need of replacing or complete overhaul. Worse, some were handed over having already been used, amounting to being “second-hand”.

Sanral – commenting on behalf of its e-Tolling operator ETC (Electronic Toll Collection) – argues these claims are false. It says ETC took over “brand new facilities and equipment” and any snags or defects were fixed before the handover. It says no generators have been replaced due to run-time (a life-cycle of 10,000 hours) but two are undergoing refurbishment.

The second issue involves UPS (uninterrupted power supply) units, which were accepted without certain bypass switches, which allow them to be repaired or serviced. UPS units ensure that maintenance can be done without any data or transaction loss.

Sanral says this defect is being handled at no cost, because it forms part of its facilities contract.

“There is no risk of any data loss due to the UPS installations,” it claims.

The roads agency also denies that it’s missing occupancy and electrical compliance certificates for some of its sites. It says the last four sites were only recently completed and it’s only at that stage that they are issued with the relevant certificates. Sources claim changes were made to electric circuits without the relevant amendments to the paperwork.

One of the most serious issues raised involves ETC’s Violation Processing Centre (VPC), which deals with motorists who fail to pay for using the highways. Sources say that with around 200 staff members, the centre is geared up to handle a violation rate of about 60%. With millions of drivers in the province, the implication is that this centre will become swamped and won’t be able to handle the volume of transactions. The VPC’s role is to secure payments or refer cases for prosecution.

“If the violation rate is 80% the centre will not be able to cope,” a source says. “There’s going to be a lot more than 60% of motorists who don’t pay.”

But Sanral says these assumptions are incorrect.

“There is adequate staffing for the anticipated violation rate. ETC has built into their system and operations scalability and flexibility in order to accommodate fluctuations related to road user behaviour.”

Sanral also defends its IT system against claims that it won’t be able to handle the digital traffic and that additional storage servers have had to be purchased.

“It is important to note that the presence of defects does not render the system inoperable. The system is ready to operate and is operating [at Bakwena] in a live environment.”

Where Sanral does make a concession, it is regarding ETC’s struggle to secure sub-contractors to carry out crucial on-going maintenance of equipment. Sanral’s reply is worth quoting in full:

“The statement regarding ongoing battles to find subcontractors is unfortunately correct. The recent (unfounded) negative publicity (specifically that related to procurement and subcontractor involvement), as well as project delays, has resulted in some degree of “caution” when doing business with ETC or being associated with the project. Publication of ETC’s subcontractor list (insinuating under-handedness) in newspapers last year is a typical contributor to such caution.”

Sources have also raised a red flag at the turn-around of senior staff at ETC, including systems executives and a facilities manager. They say managers are not given resources and are asked to “fight wars without weapons”.

Sanral says “staff attrition is normal” and while some have left over the past three years, the core team has remained intact and new talent has been recruited.

In essence, the argument is that all these problems suggest that the system is not ready for full-scale operation, especially given the public response to e-tolling. It comes down to this claim:

“There are too many faults. Too many glitches.”

The test will come soon, once e-tolling is launched. Then we will soon determine whether these concerns are small stones in the road or sharp nails that can pierce tyres and, collectively, bring even the mightiest vehicle to a halt.

To round off, we asked Sanral several direct questions about these issues:

Is all infrastructure being maintained properly?

ETC is responsible for and manages all GFIP [Gauteng Freeway Improvement Project] – related facilities and equipment through a team of facility management specialists – this in terms of their contact with Sanral. ETC ensures that the facilities and equipment are being maintained in accordance with the contract requirements, specific equipment service manuals and safety regulations. Maintenance activities are overseen by Sanral’s engineering team who assess and evaluate performance on an ongoing basis.

Is all infrastructure (sites/buildings) compliant with safety and building regulations?

ETC is responsible for and manages all GFIP-related facilities and equipment through a team of facility management specialists – this in terms of their contact with Sanral – and all safety and building regulations.

Have legitimate sub-contractors been hired to manage maintenance? If so, can you provide details?

Sanral has previously explained that there is no direct relationship between Sanral and subcontractors that ETC may use to provide specialist maintenance in terms of their contract with Sanral. ETC tendered to provide the said services to Sanral, executed by themselves and selected specialist service providers. ETC complies fully with Sanral’s procurement policies where specialist subcontractors are required to be procured in terms of the contract. Disclosure of ETC’s subcontractor database was made last year to the media and to Parliament as response to a parliamentary question.

How much money has been lost to cable theft? We are told it’s over R5-million.

This is correct. ETC does however maintain adequate insurance to cover for these events. Installation methods attempt to mitigate such occurrences, but cannot eliminate such occurrences completely. Incidents of cable theft are unfortunately prevalent across all industries and are not unique to this project. All authorities including Eskom, Telkom, and municipalities suffer from cable theft and it impacts on service delivery in general. We appeal to members of the public to report any suspicious activities.

If there was no holdup with the bill in Parliament, would Sanral be ready to launch tomorrow?

Yes, ETC is ready to operate and already operating the system on Bakwena.

Is Sanral confident e-tolls will be launched by June?

Sanral previously indicated that we respect parliamentary processes. In this regard, Sanral provided the public with an estimated date in order to provide sufficient time to members of the public to become e-toll ready. We believe our timelines are correct.

“We are of the opinion that, after Sanral’s claims in court begged to have the temporary interdict be set aside, so they could start tolling within two weeks to generate the much needed revenues, seven months later they have not launched.

“This would indicate that they have not been able to launch. We maintain the system is too cumbersome and almost unworkable, but more worryingly, too costly and fraught with a lack of transparency and trust. This will drive users away from support and high non-compliance is expected, ultimately being their biggest hurdle.” DM

Alex Eliseev is an EWN reporter. Send him an email at [email protected] or follow him on Twitter @alexeliseev