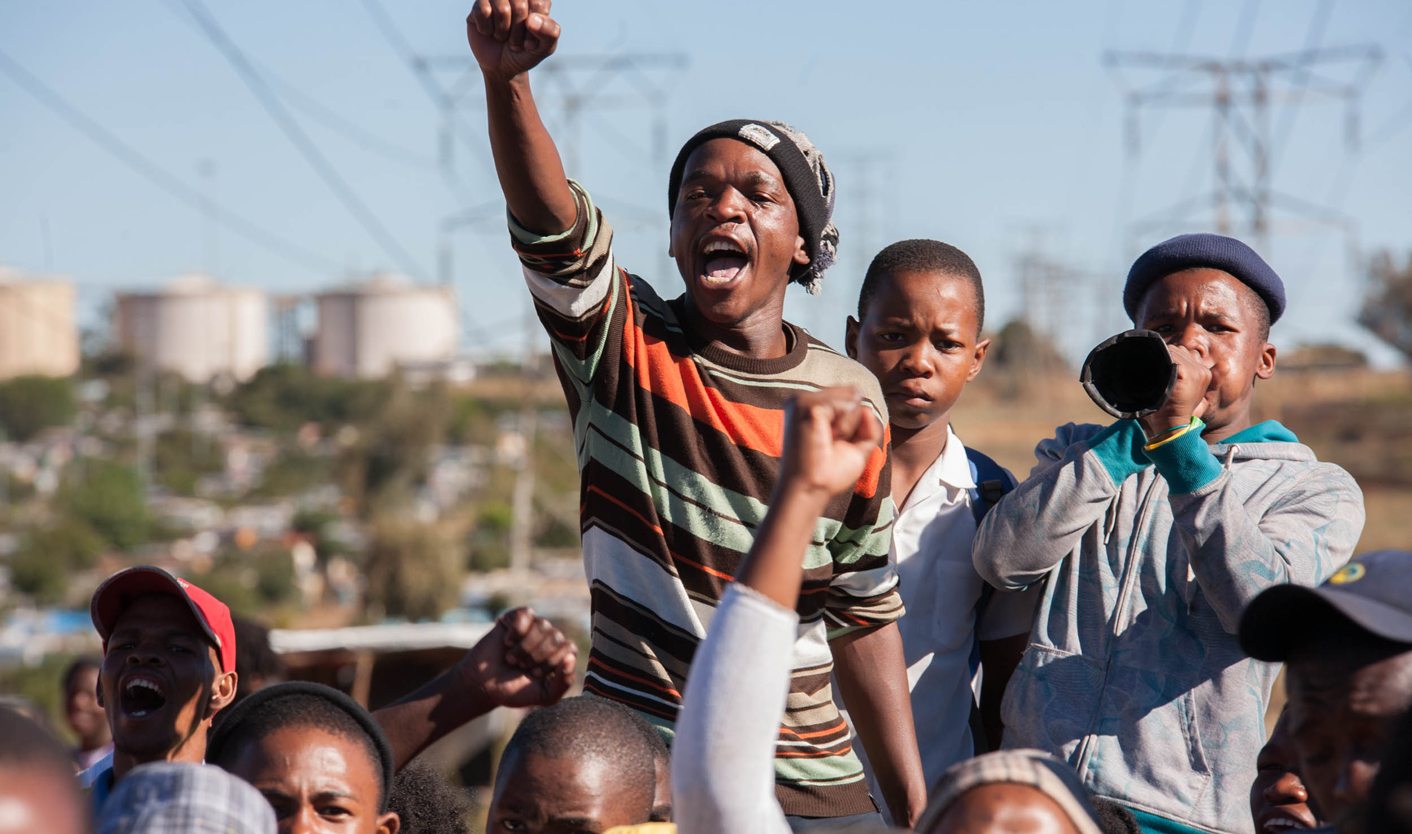 A week after protests began to simmer in Soweto’s Elias Motsoaledi informal settlement, things boiled over on Sunday evening. The demonstrators were tired of promises being made for housing and electricity and accused local leaders of neglecting them. Johannesburg MMC Dan Bovu arrived on Monday with a timeline to address grievances, but that was after the local Kentucky Fried Chicken was burnt to a crisp. By GREG NICOLSON.

Photo: The KFC was set alight at 19:15 on Sunday evening after residents had fought with police throughout the day. It was simple, they said; there was little security, unlike surrounding stores, most of which have metal roller doors. The restaurant was looted. “People took chicken, crates of cold drink, even ice cream,” one protester told Daily Maverick. They attacked the KFC, which sits just outside the informal settlement on Chris Hani Road, a Soweto thoroughfare, after the police dispersed.

Photo: Monica Kossa has lived in Elias Motsoaledi since 1996. She shares her shack with nine people and has no electricity. She collects water from a tap 200 meters away, one of the number of taps shared by thousands of residents. The anger was obvious among residents on Monday, with everyone Daily Maverick spoke to complaining about the lack of delivery on housing, electricity and water services.

Photo: A toilet in Elias Motsoaledi.

Photo: The informal settlement was turned into a conflict zone. Large rocks were placed in the road and trenches dug to prevent police nyalas from passing. The SAPS said one person died from a stabbing on Sunday night but it was unrelated to the protests. Protest leader Johannes Latedisa questioned that claim, saying the deceased was shot with rubber bullets and residents were arrested when they went to see the body.

Photo: Some of the young male protesters in their early 20s spoke of growing up in settlement and the difficulties they have faced. Many of the young men said they have young children and they do not want them to grow up in the same conditions.

Photo: Residents briefly toyi-toyied on Monday but were peaceful due to the heavy police presence and promise that a government official would visit. Police arrested 19 people in relation to Sunday’s violence: 18 adults and one juvenile.

Photo: Johannesburg MMC of Housing Dan Bovu, in the centre foreground, spoke to the community and explained a timeline to improve issues in the area. His department will meet soon with residents to explain what contractors have been signed to build houses and when. He also said he will try to speed the process of delivering electricity.

Photo: Traffic lights on the corner of Chris Hani Road and Nicholas Street were pushed over by protesters. It took only four men to push over a robot, said protestors.

Photo: After a run up, a man jumps over the creek that separates the two tides of Elias Motsoaledi. It’s prone to flooding and residents complained at what they have to go through everyday just to move around their own area. DM

Main photo: Residents shout “awethu!” before MMC Bovu speaks. The protest was suspended on Monday evening but demonstrators will gather at the Protea Magistrates Court on Tuesday morning to demand the release of their comrades who were arrested for public violence. All photos by Greg Nicolson