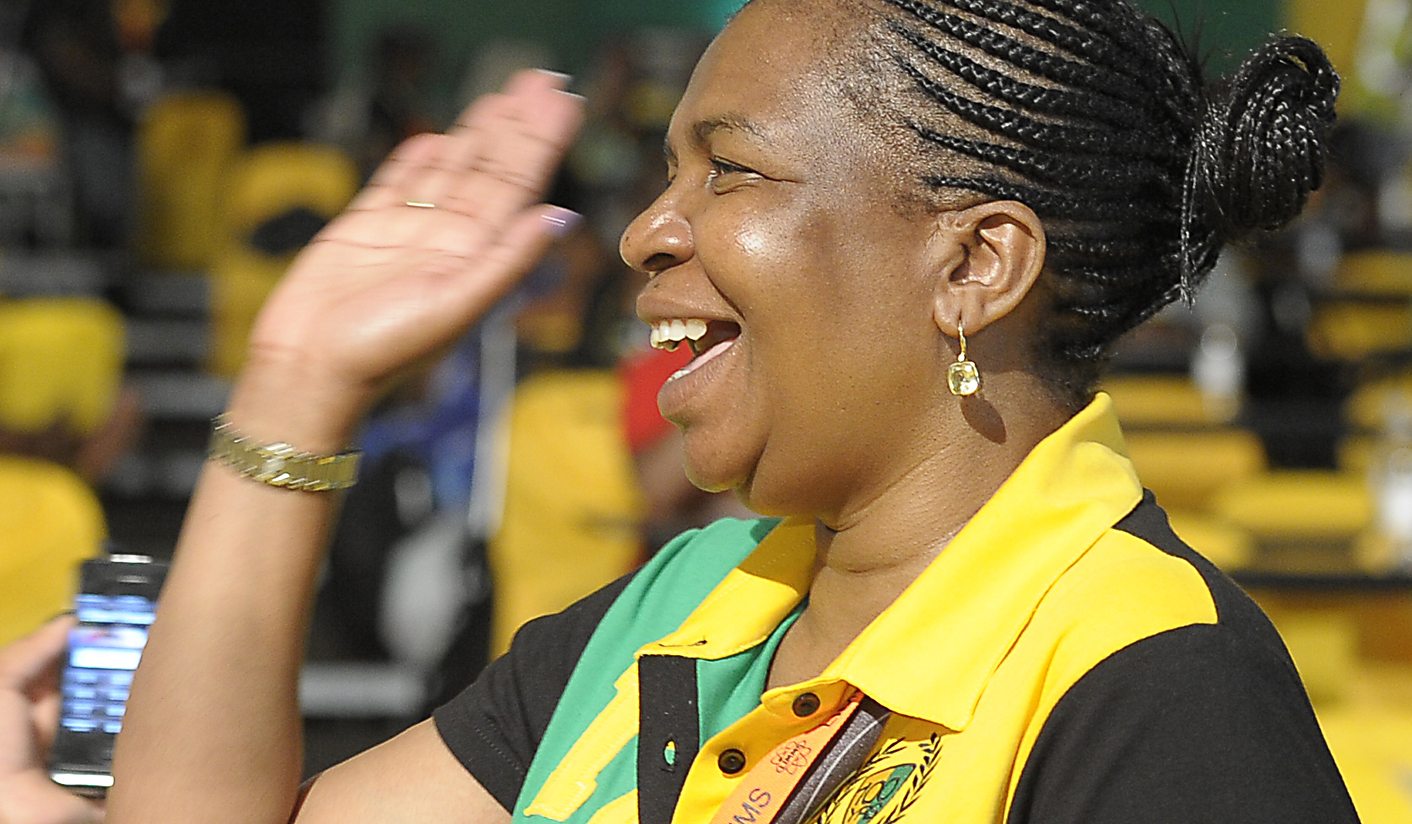 On Monday, communications minister Dina Pule finally responded to a 10-month long series of investigations and articles by the Sunday Times, alleging that she had a hand in awarding lucrative contracts to her boyfriend. Her response was a blistering ad hominem attack against the newspaper and its investigative journalists, accusing them of blackmailing her and being the lackeys of business and political interests wishing to obtain a multi-billion rand tender for the migration to a digital television signal. If the point of the exercise were to raise suspicions even more, then she accomplished that with aplomb. By SIPHO HLONGWANE.

The late, great writer Christopher Hitchens famously said that what could be asserted without evidence could be dismissed without evidence. Though the epistemology means that a statement made without any evidentiary basis is worth no more or less than any other statement similarly made, the communications minister seems to believe that claims made without the backing of the full and indisputable weight of fact open the claimant up to ad hominem attacks.

The basis of her defence against a series of stories published by the Sunday Times is that the paper is in bed with corrupt businesspeople and politicians who are seeking to pervert the department’s tender process for their benefit, and also that its investigative journalists are dishonest and downright criminal in their conduct. She has set up her word against that of the paper, and has asked South Africa to believe her because the ST is a rotten apple.

At the Monday press conference, the minister repeatedly denied all wrongdoing, and claimed that ST investigative reporters Mzilikazi wa Afrika and Stephan Hofstatter had tried to blackmail and bribe her, and also attempted a honeycomb trap on two separate occasion to extract information from her.

The story that finally seems to have tipped her over the edge after ten months is one that ran on 24 March 2013, with the headline: Fire Pule Now, Mr President, saying that the minister’s boyfriend, Phosane Mngqibisa, had infiltrated state-owned companies and other entities under Pule’s authority.

“A Sunday Times investigation this week uncovered evidence of an internal audit showing that Mngqibisa engineered getting friends and relatives on the boards of the Post Office, Sentech, Usasa and the SABC with the full knowledge of Pule – offering decisive evidence of just how unsuited the minister is to her job.

“The evidence is supported by five independent sources – several of whom serve on these boards, executive committees and top communications department posts. All spoke on condition of anonymity,” the ST said.

Other ST stories have accused Pule of helping her boyfriend benefit from contracts related to the 2012 ICT Indaba to the tune of millions of rands.

The claims made against the ST, Wa Afrika and Hofstatter are extraordinary.

Pule said that Wa Afrika was clearly being ‘handled’ by businesspeople within the industry. She said: “You will recall that a few years ago, Wa Afrika was fired by the former Sunday Times editor Mondli Makhanya for conflict of interest because of his tendency to develop unsavoury ties with sources. While he was out of work, Wa Afrika became involved in many business ventures and pursued various business opportunities. It is these extensive business networks that Wa Afrika pursued that have now come back to disgrace the Sunday Times.

“We have established that one of the business opportunities Wa Afrika pursued involved importing cheap cellphones from China. The Department oversees the regulation of the cellphone industry. At the centre of the cellphone venture were these prominent business people who have developed an insatiable appetite in the set-top-box tender.

“Officially, Wa Afrika is supposed to be no longer involved in business. However, he has maintained networks with prominent business people. Wa Afrika’s return to the Sunday Times as a journalist has given his network of associates and friends a media ally whom they use to further their financial interests,” she said.

Before the first story was published last year, the same associates contacted Pule to offer to make the story disappear. They allegedly said: “Minister, we can help you manage that young man, Mzilikazi, because he is our man. We raised him.”

Pule said that Wa Afrika’s associates were people who were currently bidding to win the set-top-box tender, which migrate television signals from an analogue to a digital system. The plan requires a big infrastructure rollout, and there are billions of rands involved.

She also claimed that a “brother” of Wa Afrika repeatedly called her to say that he could prevail upon the ST journalist to abandon the investigation. The man apparently made a sexual advance, which she rejected.

After that, she began getting calls from people offering to get the newspaper off her back, she said. One of the calls came from a woman who said she knew Wa Afrika’s partner Stephan Hofstatter well, and could convince him to let the communications investigation go if she appointed her to be a special advisor. A government official then overheard her speaking to Hofstatter on the phone. She agreed to meet with the woman anyway.

“After this meeting, I managed to confirm that the real intention of this woman and Hofstatter was to plant her in my office as Special Adviser with the hope that they would be able to find some wrongdoing on my part,” Pule said.

She continued: “We [are] also equally aware that Sunday Times journalists have friends within my department and in the various state-owned entities, some of whom have an axe to grind for whatever reason.”

The Sunday Times responded to Pule on Monday afternoon, denying that Wa Afrika initiated meetings with the minister, or offered to suppress information he had, or indeed used a relative to get to her.

“We find it unfortunate that rather than dealing with the essence of the claims against her, she proceeds to attack the messenger of the stories. We also find it disturbing that the Minister would use her office to call an ‘important’ press conference, as she did today, to launch a personal attack on both the Sunday Times and its journalists,” the ST said.

Last year, Mngqibisa appealed to the press ombudsman, but his case was dismissed in December. The ombud ruled that “in light of their silence about the nature of their relationship, the newspaper cannot be blamed for thinking that the facts pointed to a personal one”.

It is not just the press that has taken an interest. Pule’s own colleagues in government believe that she has a case to answer for. The parliamentary joint ethics and members’ interest committee will hold a hearing on May 2 and 3 on the allegations levelled at her. The public protector has also launched a separate investigation.

Despite claiming that she was offered bribes, and blackmailed in order to serve a certain business interest, Pule said that she had not contacted the police. She promised to approach the press ombudsman at some point.

When asked if she would resign, Pule said: “I am not thinking of resigning. There is not a shred of evidence against me.”

In an interview with Radio 702 on Monday midday, Wa Afrika said that there was no smear campaign against the minister, but that new information kept springing up from many sources as it unfolded.

“Week in, week out we get additional information from people. We have dozens of sources… this is not a focus on one person. We keep following it up till it is over. That is how you do an investigation,” he said.

In spite of Pule’s contention that she is not under pressure, her counterattack seems to be motivated by a fear that her career could be in danger. She is facing various probes, and the issue simply will not go away.

“She has every reason to look elsewhere to avoid responsibility for these allegations,” political analyst Ralph Mathekga said to Daily Maverick. “She feels like her job is on the line.

“The allegations against the Sunday Times do not change anything. Irrespective of the issues she has raised [about Wa Afrika’s record], there are telltale signs within the department and state-owned entities like the SABC.

“In my opinion she is not a fit and proper person to lead this department,” Mathekga said.

Pule explained her decision to wait for so long before responding to the ST by saying that she had been happy to wait for the outcomes of the parliamentary and PP probes before making pronouncements, but the paper was not. She therefore decided to “do to them what they did to me”. However, she failed to explain why she chose to tell the press that two journalists tried to blackmail her at the behest of powerful business interests and not the police. After all, if the claims against her are spurious, while those she makes are serious, should she not let some law enforcement body know?

Pule may have not meant it that way, but her actions have invited the ST to prove her wrong. The next place she will be asked to explain herself is Parliament, where she may not have the luxury of accusing the MPs of having it in for her based on nothing but her word, as she did with the press on Monday. DM