Marikana Commission: Another ‘I don’t know’ marathon from Riah Phiyega 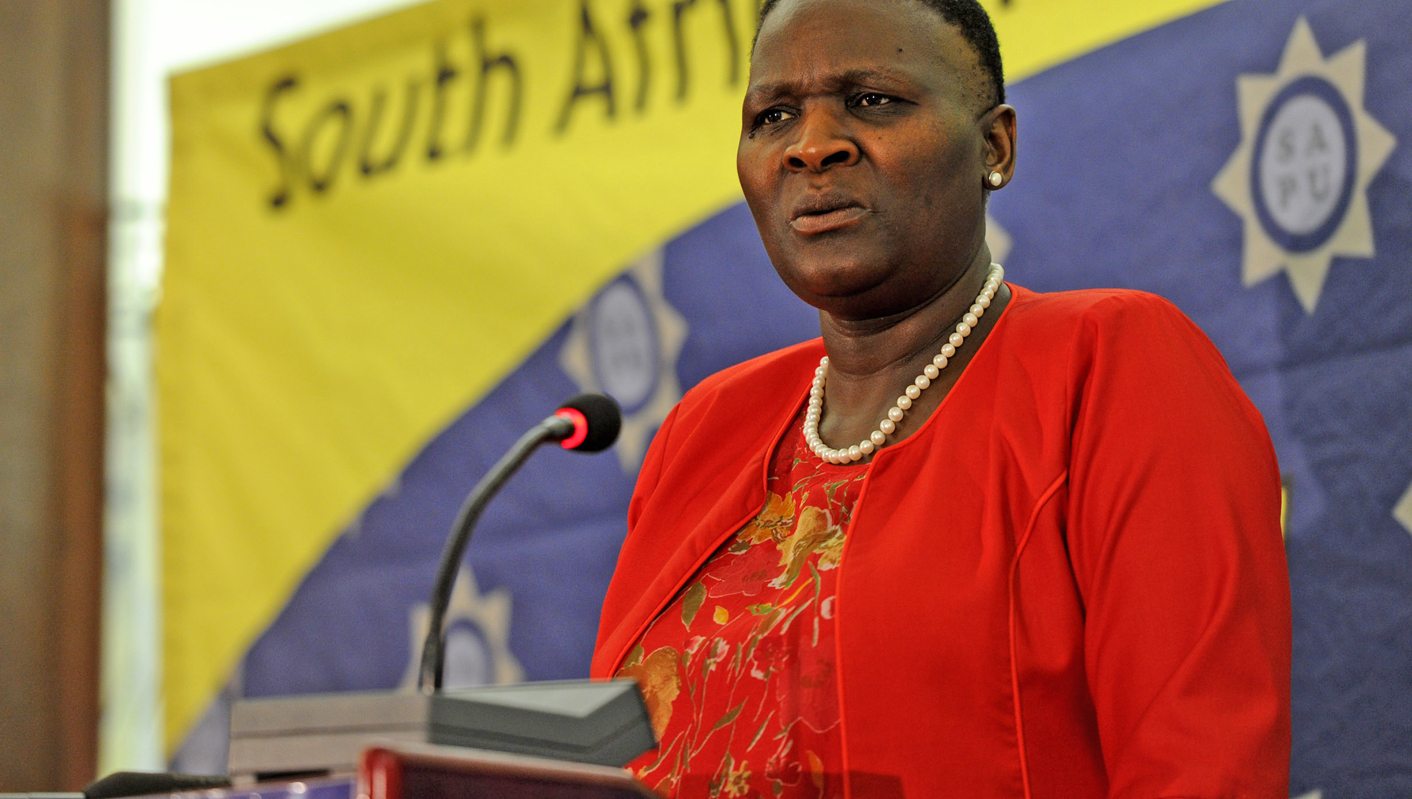 The hearing regarding the killing of 34 miners in Marikana last year wound down for the weekend after another long week of police commissioner Riah Phiyega facing cross-examination from lawyers. She has never been comfortable, resorting to linguistic gymnastics to avoid certain questions. It has seemed from the beginning that if there is to be a big scalp, it will be hers. Perhaps that is why she has been so evasive – by playing dumb, she may lose her job, but at least she will avoid culpability if the police should be found guilty of murder. By SIPHO HLONGWANE.

The Phiyega that took the stand on Thursday morning was different to the one that began her marathon testimony before the Marikana commission more than a month ago. She was very quiet at first, always taking great pains to answer each and every question as lightly as possible, and even requiring the assistance of a SAPS lawyer to find her way through the thick binders of documents before her. Various lawyers, and the commission chairman judge Ian Farlam, have found her manner irritating. But those that have questioned her have extracted steadily a picture of a person hopelessly out of her depth, and pliable to both her political bosses in the national cabinet and the police bosses she was appointed to lead. Of late, she has begun to exhibit the anxiety of someone cornered. This week she (with some help from her ally amongst the legal experts, Ishmael Semenya) has pushed back against the line of questioning. The change in tactic hasn’t helped deflect the barbs, but it is a difference.

On Thursday morning, Dumisa Ntsebeza SC (acting for the families of 21 of the deceased miners) made Phiyega explain the statement she submitted to the commission about the deadly operation. He put it to her that she adopted a ‘tough luck’ attitude to the miners that were on strike.

“The families of the deceased understand that you think those who were killed were not angels, and that police were protecting themselves. If any of those miners died in the process, tough luck,” Ntsebeza said.

Phiyega rejected the claim emphatically. She said, “Words such as tough luck were far from the statement I made… As a leader, I had no intention of applauding death; neither [sic] did I ask the police to applaud the tragedy… What I [was] saying was that you’ve been here many days, worked overtime and we’ve experienced this tragedy. They were equally traumatised like all citizens. They too needed to be spoken to.

“The nation was mourning, we were mourning too. The de-contextualising of what I said [telling police to applaud themselves] is the saddest thing of this commission. Being a human being, I would never applaud death.”

Ntsebeza wasn’t being difficult: Phiyega has courted incredible controversy since the Marikana massacre thanks to a series of misstatements, blunders and untrue statements that she has made to the public and before the inquiry. She was photographed apparently laughing while footage of the deaths of the miners was viewed (subsequent denials and apologies didn’t garner as much public attention) in the Rustenburg auditorium where the meetings are held, and she repeatedly claimed either not to remember or not to have understood certain details about the planning of the operation.

In a statement she read to the commission before her testimony began, Phiyega said that her well-trained and suitably equipped police were faced with something that they had never come across in their training, and were therefore forced to act in an unexpected manner.

Ntsebeza then asked why she never took the opportunity to send any tokens of her sorrow to the families of the deceased miners if their deaths were so regrettable. Unsurprisingly, she couldn’t reconcile the disparities in her narrative.

The pattern has repeated itself many times over the last months.

Phiyega has deflected many questions about her leadership and management of the police in August last year by saying that she was both only 65 days into her new position, and obviously that she only became a cop on the day that she was appointed to lead the SAPS. Both defences still leave her open to the charge that she was dangerously ignorant in a job that requires massive experience and skill.

That may be the point all along, of course. So far, we have seen Phiyega accept responsibility for the operation by admitting that she green-lighted it. She also submitted that she was the one who contacted the police minister to inform him of the crisis at the time. Not only is she the link between the political leadership and the police, but she is the head of the police even on an operational level. If they are found to have planned and executed murders that day, then there is a good chance that she will find herself implicated. If she is, then there is a direct link to the very top political leadership in the country.

So in spite of the generous success that the lawyers at the Marikana commission have enjoyed in getting in exposing Phiyega as ignorant, she may yet be making exactly the right kind of ground.

From our perspective, Phiyega has two choices: she can either accept alongside her colleagues that the SAPS shot and killed 34 people under questionable (and increasingly unanswerable) circumstances last year, or plead ignorance and walk away with her reputation in tatters, but her freedom still preserved. Has she decided that being evil is worse than being clueless, perhaps?

As her testimony winds down, we are likely to hear her repeat the same, deflecting sound-bites. The lawyers have nowhere else to go with her, but repeatedly point out that she was sent out to do a job and she was never whittled down to her size.

What will be much harder to show is that her strange actions shield the police minister and the top political leadership from blame, even if that becomes apparent. DM