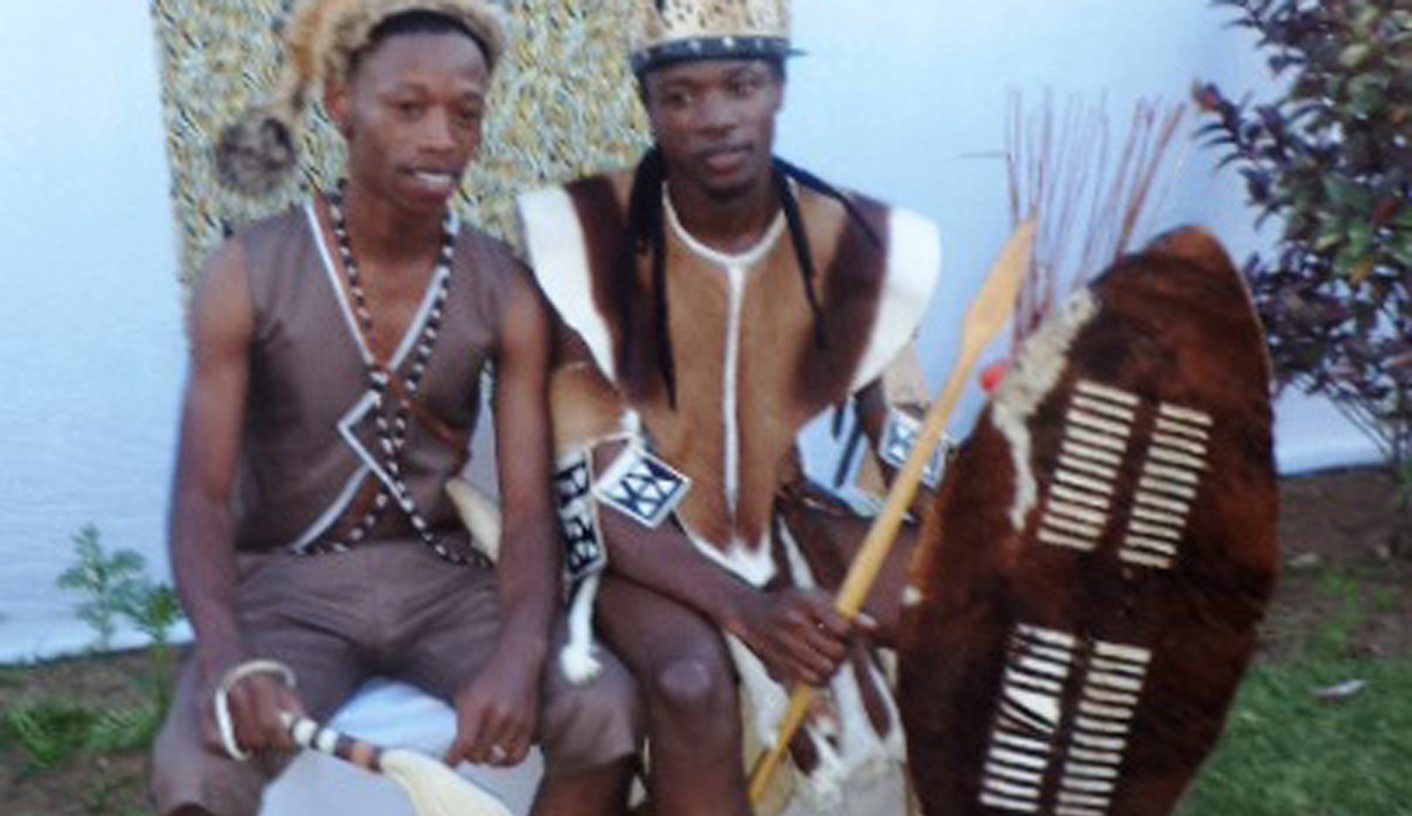 In KwaDukuza, 27-year-old Tshepo Modisane and Thoba Sithole claim to have made history – they say they are the first gay men to be married in a traditional, rural ceremony in KwaZulu-Natal. MANDY DE WAAL speaks to the happy couple.

In the town where one of Africa’s greatest warriors and military strategists was laid to rest, two courageous men are redefining what traditional masculinity is all about. In KwaDukuza (Stanger), where a memorial of Shaka kaSenzangakhona stands proud, Tshepo Modisane and Thoba Sithole became the first gay men in the province to celebrate their nuptials with a traditional, rural marriage on Saturday 6 April 2013, and invited the town to come and celebrate with them.

“This is the 21st century – society has changed and evolved. It is about time that gay rights are upheld and gay people are accepted, particularly by black people living in rural communities,” Tshepo told Daily Maverick on the phone from Durban. “We just want to lead happy and productive lives. We are gay but we are still African, and we want to live our lives in an African way following our traditions and beliefs,” he said.

At their wedding, the pair was joined by family and friends in a traditional ceremony that saw the doors of the Stanger Siva Sungam community hall flung wide open to the local community, who turned up in droves to celebrate the couple’s union. The ceremony included the slaughtering of a bull to ensure that the nuptials would be blessed in terms of ancestral traditions, and witnessed the exchange of customary gifts.

“We decided on a traditional wedding not only to keep in line with our customs and traditions, but we also wanted to show the people of this country that, yes – it is possible to have a traditional African gay wedding,” explains Modisane. “There is this idea that being gay is an ‘unAfrican’ phenomenon, that homosexuality is something to be ashamed of – that it is a Western thing. Thabo and I wanted to go against this notion by showing South Africans that being gay is indeed African and is very much a part of the African culture. We wanted people to know that a gay union can be accepted and celebrated by friends, family and the broader community,” he says.

Modisane’s husband, Sithole, says that initially the community of KwaDukuza expected to come to the wedding and to see two men draped in wedding dresses. “People can have strange notions about what it means to be gay because for the most part prejudice is based on ignorance. But when the people from KwaDukuza arrived at our wedding they witnessed two very ordinary men in love, and they celebrated with us.”

The wedding was aired on eNews and there’s a heart-warming moment that shows the pair walking into the ceremony dressed in their respective traditional garb – Modisane in his Tswana regalia and Sithole dressed in Zulu garb. As the two arrive and the crowd gets sight of them, the open skies fill with the sound of ululating and cheering.

Modisane picks up the story: “We had over 300 people who witnessed our wedding. The response was amazing because people were so excited and looking forward to the wedding. On the day people came out in their numbers, which was so unbelievable,” he says excitedly.

The pair say that they were overwhelmed by the affection and the joy displayed by the crowd. “It was a remarkable experience to be surrounded by so many people who were so accepting and warm and loving towards us,” says Sithole. “For us it was important to normalise gay marriages in the community – for people to come and witness, and see that there’s nothing strange or scary about what we’re doing. That we’re just two guys in love.”

Modisane and Sithole first met in Durban when they were both at university. “We were just friends then, but I had to come back to Johannesburg and we lost contact,” says Modisane. “Some time afterwards Thabo got a job in Johannesburg and started to work here on a full time basis in 2011. We started out as gym partners and the relationship grew – soon we were lovers and then knew we wanted to be each other’s partners. We got engaged in June last year – that’s when we decided we wanted to get married.”

Today the couple live together in Johannesburg where Modisane is an IT specialist and Sithole an audit manager at PWC. “Yes, we could have got married in Johannesburg, but it was important for us to be brave enough to have our wedding in a rural area,” says Modisane, adding: “Besides, that’s where my partner was born, grew up and went to school. It is where he comes from.”

Modisane explains that it is important to the couple that they are a positive role model for what it means to be men and to be gay. “There is so much media coverage that focuses on hostility and violence against gay people, and while we respect that it is crucial to highlight these issues, we also want to show another side. We want to show that gay people are also accepted, respected and loved in their rural communities,” he adds.

“What is remarkable for us is that this was the first gay wedding that we know of in KwaZulu-Natal and, we think, the first traditional gay ceremony in this country, and at the ceremony all we felt was love and appreciation. It was so meaningful to us because of the courage we think we showed in having this traditional, but very public, ceremony. We think it is important for others to come forward and realise their rights – as gay people we too have a right to participate in traditional ceremonies as well and to reclaim our heritage.”

The pair say that because they are men they did not pay lobola – a dowry that is customarily paid by a prospective husband to his bride’s family. Part of the reason why the couple have married is that they want to start raising a family and they say they will look to engaging a surrogate to take this next step.

“The media needs to write more stories about positive gay role models – people who are getting married, who contribute to their society, and who are raising a family. It may not be headline news, but it is important in terms of normalising our society and growing the acceptance that being gay is just another part of life.”

The wedded couple will henceforth be known as Mr and Mr Sithole-Modisane, and as news of their union started to travel the globe, the world celebrated with them. On Huffington Post comments under the story about the duo were welcoming, and one read: “Blaze the way my brothers blaze the Way. Very proud that you kept your traditions too. Unlike in the United States gays have been allowed to marry in South Africa for a while.”

At LGBTQ Nation, America’s most followed LGBTQ news service, the story received headline status, was ‘liked’ by thousands of readers, and trailed by a plethora of cheering comments. Like a warm ray of sunshine in a frosty winter, the tale of the Sithole-Modisane wedding was a rare and much welcome good news story from the most southern tip of Africa. DM