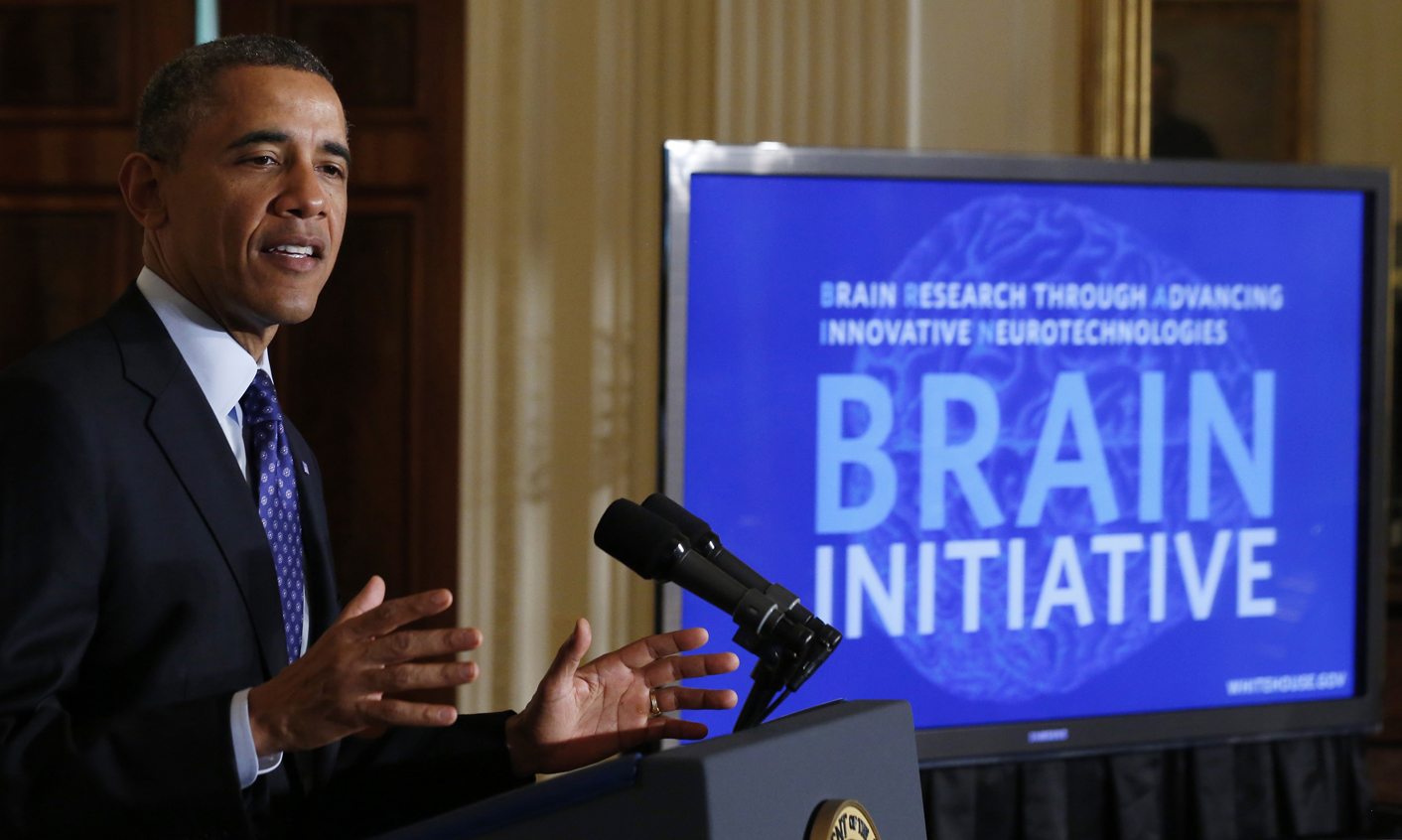 The White House unveiled a sweeping new initiative on Tuesday to map the individual cells and circuits that make up the human brain, a project that will give scientists a better understanding of how a healthy brain works and how to devise better treatments for injuries and diseases of the brain. By Jeff Mason and Julie Steenhuysen.

“There is this enormous mystery waiting to be unlocked,” said President Barack Obama of the ambitious project unveiled at a White House ceremony packed with scientists.

Called the Brain Research through Advancing Innovative Neurotechnologies (BRAIN) Initiative, the program will be funded with an initial $100 million from the president’s fiscal 2014 budget, which the White House is slated to release next week.

Dr Francis Collins, director of the federally funded National Institutes of Health, likened the initiative to mapping the human genome, a $3.8 billion effort he helped to lead as former director of the National Human Genome Research Institute.

“The human brain is at the present time the most complicated organ in the known universe,” Collins said in a conference call. “We aim through this ambitious – some would call it audacious – project, to try to unravel those mysteries.”

Collins said the NIH plans to assemble a “dream team” of 15 scientists who will set the priorities for the research. Initially, scientists will try to learn the language of how the brain operates.

Ultimately, Collins said, the effort should allow researchers to understand such complex diseases as epilepsy, autism, schizophrenia, Alzheimer’s disease, traumatic brain injury and a long list of conditions “that collectively affect 100 million Americans and cost us $500 billion each year in terms of healthcare costs.”

Collins conceded that the initial investment of $100 million in the first year is just a start for this project, which likely will take many years to bear fruit. But he noted that the Human Genome Project started off with a $28 million investment.

“Even if you throw in an inflation factor, it’s a pretty good start,” said Collins, who noted that NIH spends a total of $5.5 billion for all of its neuroscience research efforts.

Of course, there is no guarantee that the Democratic president, who is in a standoff with Republican lawmakers over how to reduce the U.S. deficit, will be able to get a $100 million proposal through a highly divided Congress. But the president said that investment in areas such as education and development should be critical even as spending cuts are needed to address the country’s fiscal woes.

“We can’t afford to miss these opportunities while the rest of the world races ahead. We have to seize them. I don’t want the next job-creating discoveries to happen in China or India or Germany. I want them to happen right here,” Obama said.

Although the funding requires congressional approval, agencies have some discretion to start working on the program ahead of time, a White House spokesman said.

The main thrust of the BRAIN Initiative “is to be able to study the brain at a large scale to see how lots of neurons work together to produce high-level functions like learning, memory and creativity,” said neuroscientist John Donoghue of Brown University. Today’s brain imaging, such as functional magnetic resonance imaging or fMRI, “can’t see the activity of individual neurons,” he said: “it’s like reading the newspaper at two arms’ length.”

But by monitoring activity in individual neurons, researchers hope to see, for instance, “how the brain produces language, including how the visual cortex interacts with speech and language areas so you can read a word, speak it and understand it. It’s a big network of neurons all communicating with each other,” Donoghue said.

“But because we don’t currently have the tools for this, the first step will be to develop them. That will involve, for instance, bringing in neuro-engineers to figure out how we can take advantage of advances in wireless technology” to place multiple probes in the brain to measure activity at the level of individual neurons, he said.

Initial winners from the push will likely be information companies, said Tom Kalil of the White House’s Office of Science & Technology Policy. Kalil told the briefing that insights from understanding how the human brain works could inform the design of next-generation computers.

“It could have a big impact on the entire information and communication technology industry,” he said, adding that ultimately, the push will improve the ability to diagnose, treat and ultimately prevent diseases and disorders of the brain.

The effort may also attract fresh interest from drug companies, which have largely abandoned neuroscience because of costly, failed attempts at developing drugs using incomplete or faulty models of how the brain works.

Dr. Christer Nordstedt, vice president of neuroscience research and clinical development at Eli Lilly and Co, which has nine potential new brain drugs in the works, likened the task to trying to fix a broken engine without knowing how it is supposed to work.

“We’ve been handicapped by the fact that we have been studying diseases in animals that don’t really exist in animals. Mice don’t get depression. They don’t get schizophrenia. They don’t get Alzheimer’s disease,” he said, adding that efforts like the BRAIN mapping project are “incredibly important” to the search for better treatments.

The program drew praise from many groups advocating for brain research, including the Society of Neuroscience, which said the project could lead to “revolutionary advances” that could affect more than 1,000 diseases and disorders of the brain.

Harry Johns, president and chief executive of the Alzheimer’s Association, said in a statement: “The federal government has realized incredible success when it invests in tackling challenges of this magnitude, and Alzheimer’s will be no different.”

Researchers said in February that the number of U.S. residents aged 65 and older living with Alzheimer’s would nearly triple to 13.8 million by 2050, drawing attention to the need for further study. DM

Photo: U.S. President Barack Obama announces his administration’s Brain Research through Advancing Innovative Neurotechnologies (BRAIN) Initiative at the White House in Washington, April 2, 2013. The White House unveiled details on Tuesday on a new initiative to study the human brain with the goal of treating or curing Alzheimer’s disease and other disorders. REUTERS/Jason Reed