Curiouser and curiouser as CAR goes down the rabbit hole 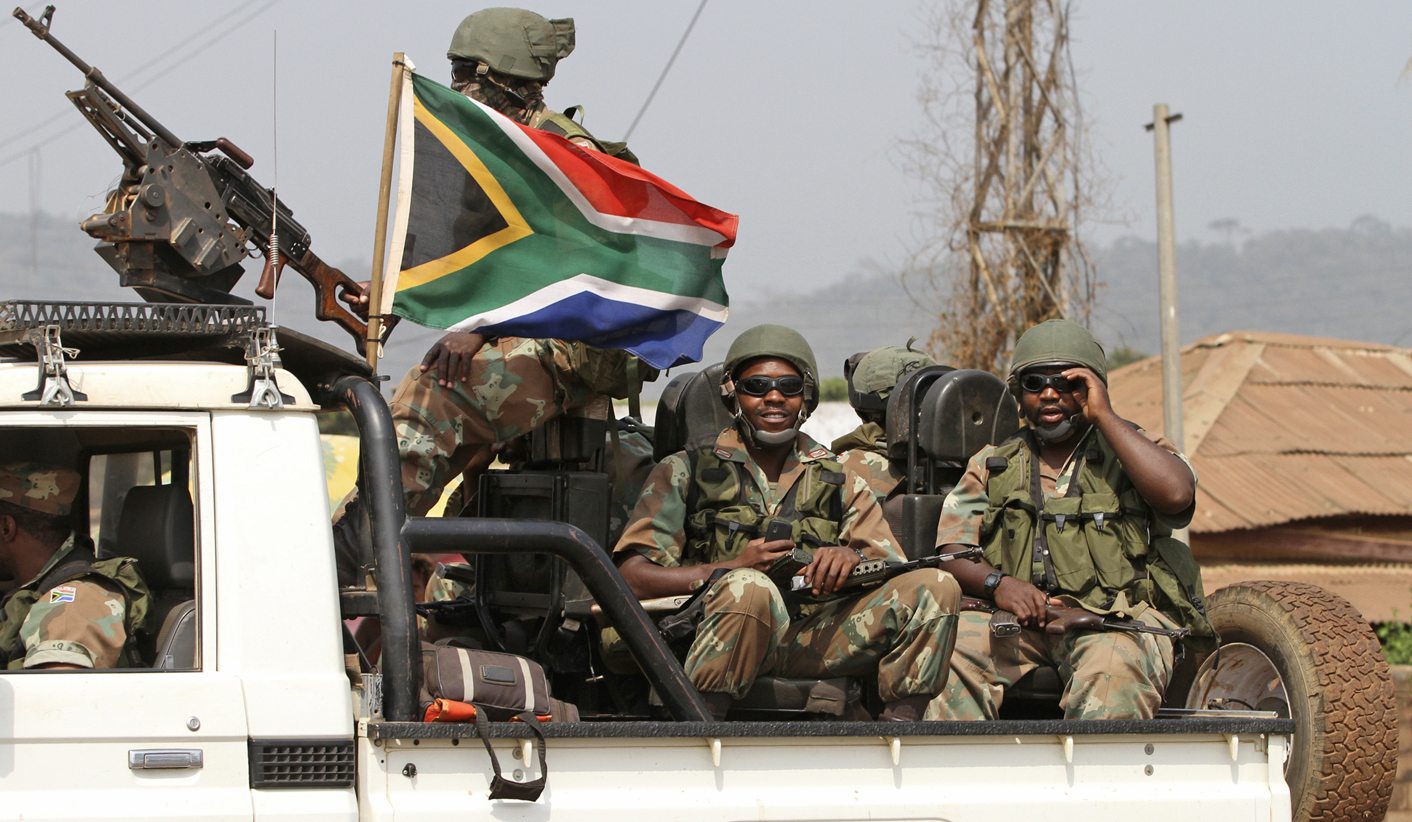 The South African government’s version of what transpired in the Central African Republic last weekend continues to be found wanting. There are still more questions about what exactly happened, where exactly the troops were when they were attacked and why they were there in the first place. At the same time, the members of SANDF in South Africa feel demoralised about their colleagues' engagement and lack of understanding of its very purpose. By GREG NICOLSON, KHADIJA PATEL and THAPELO LEKGOWA.

Information from troops who fought in the bloody battle in Bangui continues to emerge, casting doubt on the CAR mission and the state’s version of events. SA National Defence Union (Sandu) National Secretary Pikkie Greeff is in contact with the troops deployed to the CAR, who told him they had been misled. “What’s pretty clear is at least not during the firefight we were not protecting our base,” Greeff told Daily Maverick in his Pretoria office.

“What exactly is so important?” asked Greeff, questioning why troops were fighting away from the SANDF base and not protecting the deposed president Francois Bozize.

The questions being raised by the union have not been welcomed by the South African National Defence Force (SANDF). The Defence Force released a statement on Wednesday evening condemning the union’s statements on the “CAR debacle”.

Moreover, the SANDF has cast aspersions on the integrity of the union.

“We all know Sandu was created to fight transformation…” the military said in its statement.

Officials from Sandu, who describe the union as the largest in the SANDF, have condemned the statement from the SANDF. Greef said the union would demand a retraction of the statement, failing which it would file a defamation lawsuit against the military.

But as South African troops continue to be transported to Uganda for the eventual deployment to CAR, the national debate surrounding the “CAR debacle” must urgently question the wisdom, and the necessity, of deploying yet more troops to the CAR.

On Wednesday, the ANC rushed to defend the decision to deploy troops to CAR.  In a statement, the Chief Whip Mathole Motshekga said the party’s founding values supported the struggle for a humane, just, equitable, democratic, and free world.

“In particular, the development and prosperity of Africa remains the central objective of the government’s international perspective and policy for purposes of advancing the African Renaissance,” Motshekga said.

And yet South Africa’s deployment of further troops to CAR comes as rebels enlist the help of French troops to bring order to Bangui. Reporting for France24, Sarah Sakho says confusion reigns in the streets of the capital, as patrollers are overwhelmed by a deluge of men purporting to be Seleka rebels, rogue elements from within Seleka and looters making the most of the upheaval.

“Some 150 French soldiers are present in the city. Their priority to ensure the security of French and are active with respect to the evacuation of people from their homes,” Sakho said.

These French troops have also been instrumental to the welfare of the South African troops in the CAR.

Unions say South Africa turned to the French for help when they ran out of ammunition during the battle last weekend. Members of the SANDF were captured by the rebels, but the French came to the rescue and negotiated their release. This particular statement of the union is consistent with rumours that alleged over twenty South Africans had been abducted by rebels.

France, however, is said to be fed up with playing policeman in Francophone Africa. With the French crying off, it remains to be seen who exactly will remain in CAR to ensure whatever semblance of government is in place.

And it is a not so remote possibility that the CAR could implode into another civil war in which factions of the Seleka rebel coalition turn against each other. The African Union and the United Nations have their hands full putting out fires in the DRC and Mali, and analysts fear the regional Central African body simply do not have the clout to ensure rebels abide the agreement.

South Africa would have been the perfect choice to oversee the transition. We come with our own history of a complex transition from the brink of civil war. And we’ve also accumulated some experience mediating between warring parties in the likes of the DRC and Sudan. We have, however, usurped our credibility to even to be considered as an honest broker for reconciliation in CAR. By deployed troops in support of Bozize’s government, South Africa has already picked a side.

Still, South Africa may well re-enter the fray in CAR under new branding – BRICS. On Wednesday evening, BRICS leaders speaking at the conclusion of the summit in Durban expressed their readiness “to facilitate progress to a peaceful resolution of the conflict.”

How such an offer will be interpreted within CAR remains to be seen.

When Bozize was quizzed about the role of South African troops in CAR during his final interview as president with the French-language Jeune Afrique magazine he said, “South Africans are here as part of a bilateral cooperation agreement concluded before the outbreak of the rebellion. They are not intended to be dragged into the [conflict], but they will leave once security conditions [are] met, which is not the case.”

“When I called on him late December 2012, President Jacob Zuma reacted immediately,” he said. “His contingent was deployed in less than a week.”

“[Zuma] immediately understood what happened in Libya and Mali could be reproduced in CAR,” Bozize said.

Here, Bozize appears to be alluding to a French intervention. So, was Zuma swayed by the need for South Africa to bulk up its presence in Francophone Africa to mitigate the influence of France, as ineffective as it may be?

It is the troops making up the country’s beleaguered armed forces that have faced the consequences of this decision.

Speaking anonymously, an SANDF member stationed at the Tempe base in Bloemfontein told Daily Maverick morale amongst the troops had dipped.

“I hate him,” was the first response of a soldier Daily Maverick contacted.

“In the military base we are sad and feel betrayed. Our duty is to protect civilians and in the case of CAR our fellow troops were protecting the president, [but we are] not sure why… We can’t stop talking about our fellow subordinates.”

Asked if Defence Force members are afraid of being deployed, the private responded, “All I can say is [that] it’s hectic here, but I am not scared if it is to protect civilians.”

“Do you understand what it does to these soldiers?” union spokesperson Jeff Dubazana asked.

“We are concerned our soldiers are being exposed to risk when one, they are under-equipped; two, they’re being misled; and three, they are there illegally,” said Greeff, whose union is looking at what options it has to take the matter to court.